Mask Of The Rose Is A Romantic Visual Novel Set In,...

Few games are better for coping with a quarantine than Destiny 2: Beyond Light. (Screenshot: Bungie)

In Japan, There’s A Chiropractor For Gamers 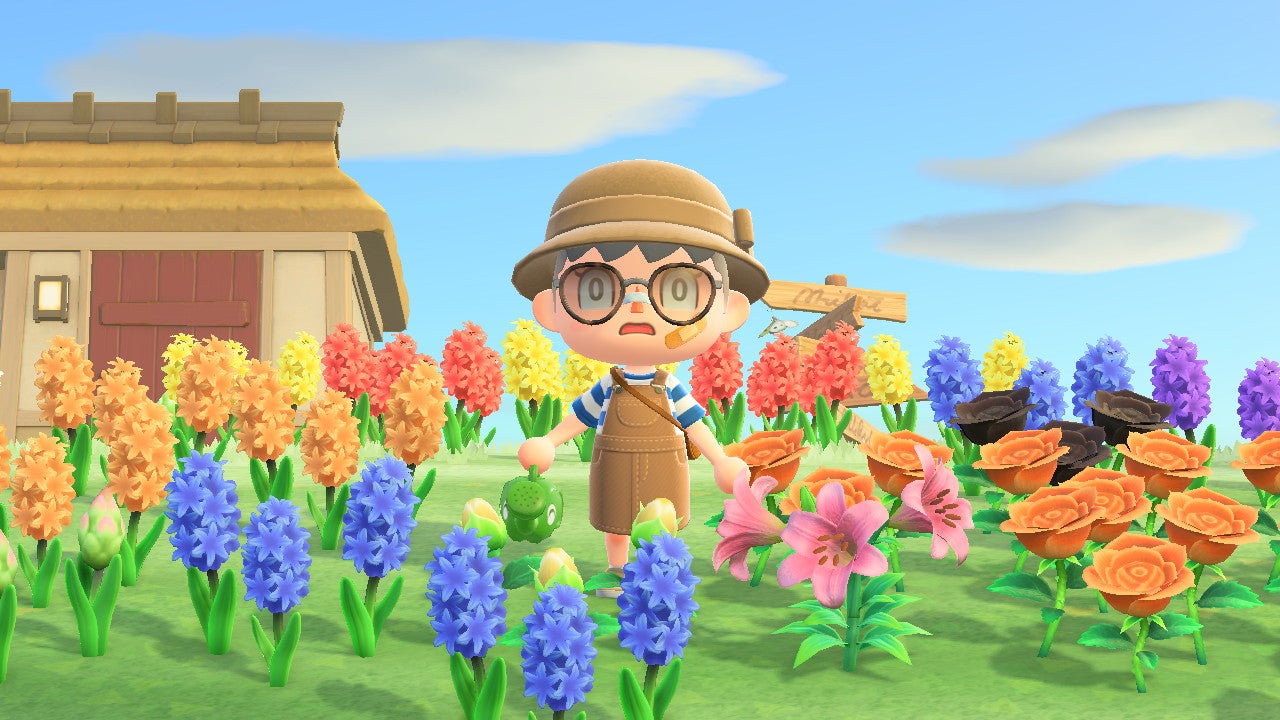 All I wanted was to try growing some of the neat hybrid flowers in Animal Crossing: New Horizons. Little did I know that my handfuls of seeds would blossom into a garden of madness.

Animal Crossing looks cute and simplistic on the surface, only to reveal more complex systems as you continue playing. The best examples of this tendency are flowers. 2005’s Wild World introduced the ability to grow hybrid flowers, adding a whole new layer to the series’ core gameplay. Two red roses planted next to one another, for instance, had a chance to produce both red and black roses, whereas two red pansies might spawn a purple pansy. Breeding patterns have changed in subsequent releases, but the foundation remains the same: Tend to your gardens and get cool new colours.

While I always found previous games’ flower breeding neat, I never wanted to dedicate a whole heap of time to it. I try to keep my Animal Crossing life as chill as possible to offset real-life stresses, and the complexities of spawning hybrid flowers seemed like way too much work for this amateur digital botanist. In previous games I was content to simply spend my time fishing, hunting bugs, and spreading catchphrases around town. With New Horizons, however, I thought, “Why the heck not?”

I guess I have Leif to blame for my sudden interest in gardening. The easygoing sloth appears sporadically in New Horizons due to the recent Nature Day update, selling hedges and flowers that usually aren’t available at the island’s general store. Whereas Timmy and Tommy seemed to only offer pansies for the longest time, Leif had a massive selection of species. I bought several packets of roses, hyacinths, and lilies. After finding proper spaces for gardens, I plopped them down in diamond patterns to maximise breeding potential. My watering can got a workout but, eventually, every petal was glistening. Now all I had to do was wait.

Having grown a little bored of my daily routine in Animal Crossing: New Horizons—check turnip prices, dig up fossils, speak to my favourite villagers, blah blah blah—daily watering provided a fun new diversion from my list of chores. Soon, I also started to prune unwanted sprouts that wouldn’t yield the colours I wanted. My overall goal was to eventually have at least one of every flower and colour variety the game offered, but short-term, I focused my efforts on getting as many purple and black varieties as possible. Which was exciting until I realised how woefully ill-prepared I was to deal with the products of my genetic experimentation. 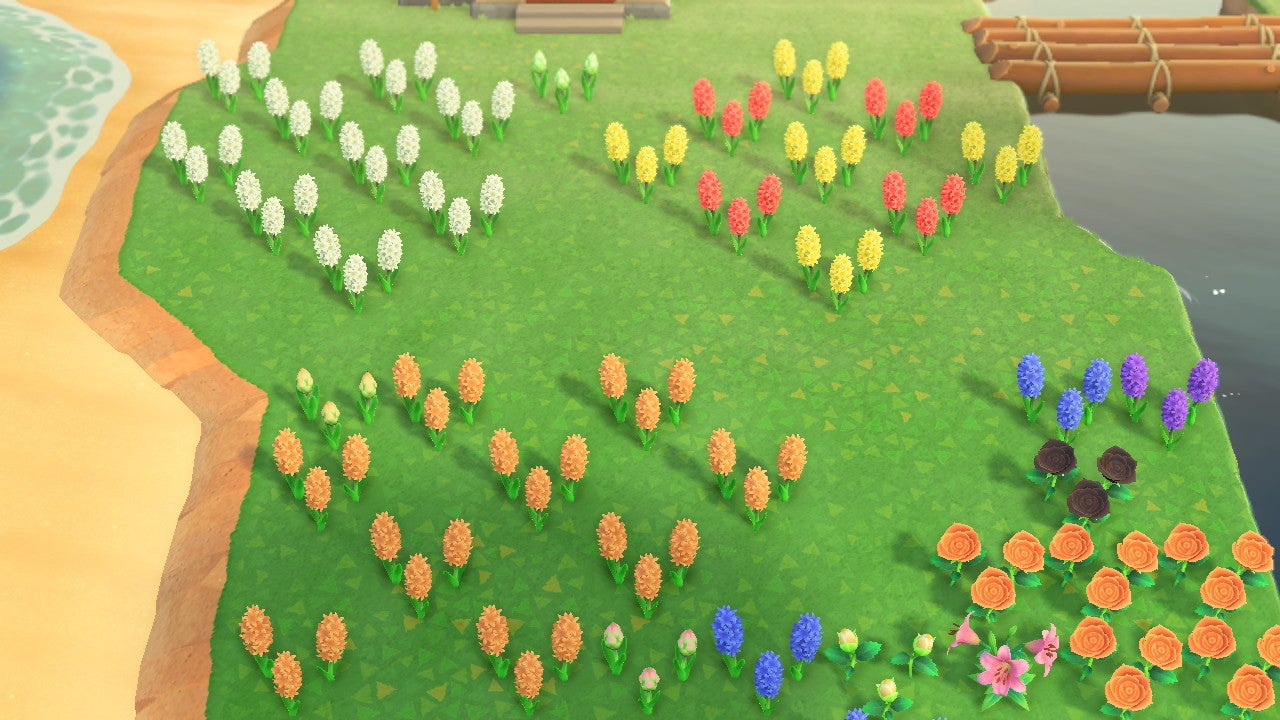 A small portion of the infestation. I probably planted these way too close to Cranston’s house. Sorry buddy! (Screenshot: Nintendo, Kotaku)

The spread of flowers across my island was slow but insidious. Whenever a basic colour sprouted, I would simply add it to my checkerboard planting pattern to increase chances of a more uncommon flower appearing. If a new colour showed up I’d devote another patch to them, to try and score tertiary strains like blue roses. I assumed from early efforts that flowers would only spread through religious tending, foolishly believing these large gardens could be controlled by simply withholding water.

I forgot about rain.

I love the rain, especially in Animal Crossing. It gives me a chance to wear new clothes and I can’t get enough of the little splish splosh sounds my character’s boots make as I run around town. But when you’re trying to keep flowers in check it’s a nightmare. Every flower on the island gets watered in the downpour, naturally, which in turn prompts further growth. It’s common to wake up the morning after a storm to find a dozen new buds have sprung up overnight, especially if you, like me, kept the existing wildflowers on your island to maintain some of its natural beauty. But my unruly mobs of flora are now surrounding and crowding out even those native plants. If I don’t take steps to corral them, it’s only a matter of time until they completely overtake my fellow villagers’ homes. The stress of what to do with these flowers is a constant in the back of my mind, and they only continue to spread.

New Horizons exacerbates this problem by limiting where you can put your flowers.

Once planted and dug up, you can’t put flowers in storage or even drop them in your house. The only two options are keeping them in your inventory or replanting them on the island, the latter of which only opens you up to further growth. As a bit of a hoarder, I tend to fixate on the potential usefulness of everything in my life. Sure, I can just sell excess flowers to Timmy and Tommy, but what if I want to save a few for future projects? What if I want to give away some as gifts? The concept of permanently losing rare colours that took days or even weeks to cultivate is anathema to me.

I’ve heard rumours that fences are the only thing that can truly stop flowers from spreading, but I only learned that recently. Now I have to deal with the consequences. It’s going to take some extensive replanting to slow the propagation of new flowers and terraforming to make room for fenced-in gardens. In other words, a lot of work! Why am I playing this again?

Apart from not allowing me to store flowers away, none of this is Animal Crossing: New Horizons’ fault. My own hubris got me into this mess. I played god in my pursuit of golden roses and purple tulips without thinking of the potential havoc I would wreak on my island’s ecosystem. I invited these invasive species into my home like vampires, but it’s going to take a lot more than some garlic to fix. Even now I see rain clouds gathering overhead.