There is a war raging in Grand Theft Auto Online, but not between drug dealers or criminal kingpins. Instead, players are donning green, purple, or white suits in a war of different coloured aliens. It’s weird, even for GTA Online.

As with most wars and conflicts, it is impossible to pinpoint a specific moment when it all began, but over the last few weeks a trend has popped up in GTA Online. As reported on by other outlets, players have begun dressing up as neon green aliens and roaming the virtual streets of Los Santos. After finding a lone player, these gangs hop out of their vans and beat the victim to death with fists and baseball bats.

But it seems these green aliens have gone too far and made some enemies. Across various subreddits connected to GTA Online, players are beginning to fight back against the green alien hordes. One of the most popular factions that has sprouted up recently are the purple aliens. Team purple, if you will. These aliens are more focused on attacking green aliens than jumping random players going about their day in GTA Online. There are even reports of these purple aliens protecting players from the deadly gangs of green aliens. Seemingly in response to the purple and green aliens, another faction has formed, with players donning white clothes and costumes, becoming team white. Other smaller sub-factions are also forming. For example, some players have decided to rid GTA Online of all neon aliens, regardless of colour, and are dressing up as FIB agents. (In GTA V and GTA Online, the FIB is the in-game parody of the FBI.)

Some enemy factions are teaming up against other factions, like green and purple aliens declaring hatred for team red. Since anyone can wear any colour they want and play however they choose, these allegiances are shaky at best. In general, if you see a person wearing a purple suit there’s still a good chance they pull out a rifle and kill you. 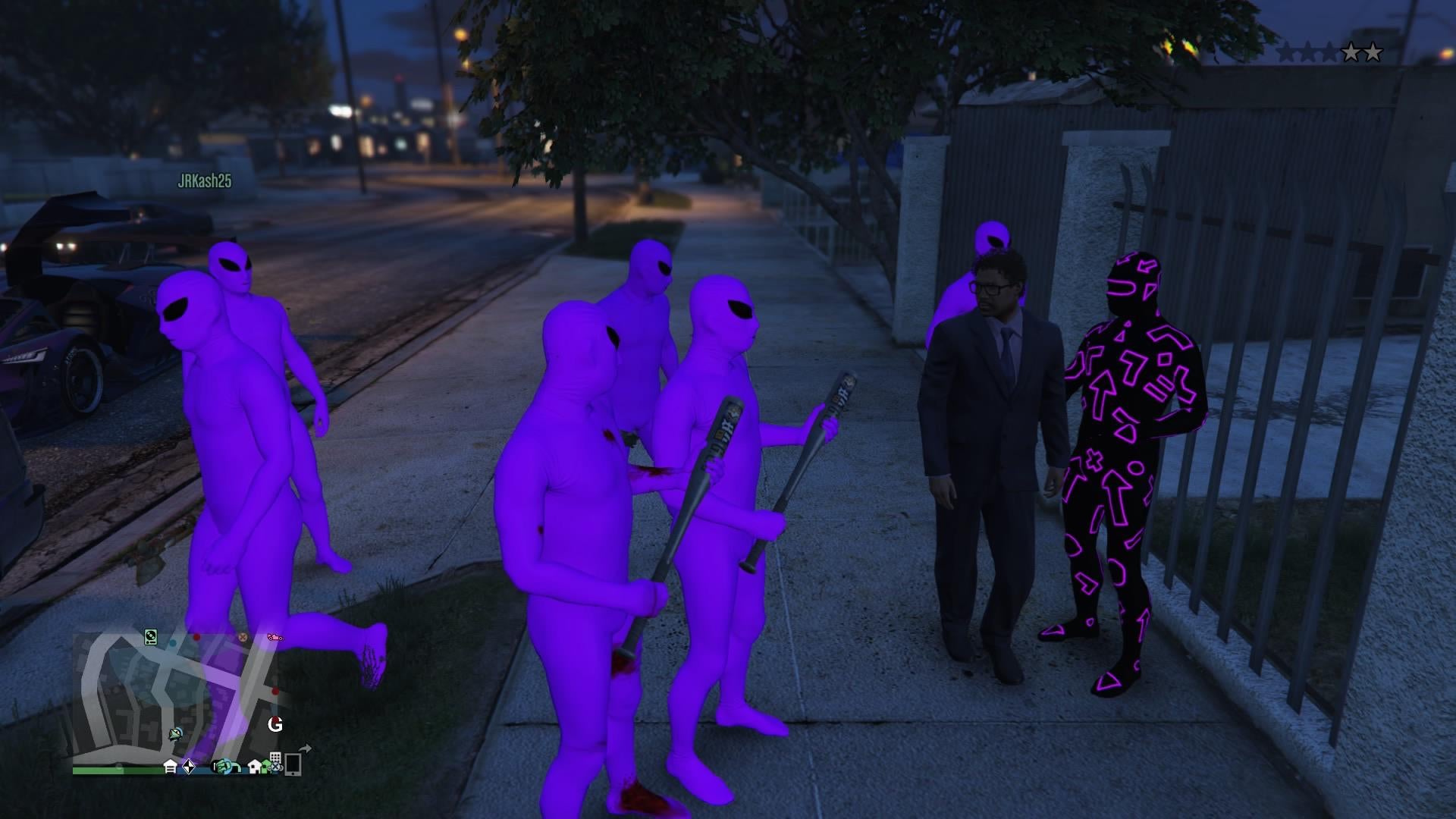 For players who haven’t declared a side or don’t even know about the war, GTA Online lobbies might feel a bit strange right now. “I’ve been right in the middle of this and I still don’t fully understand what’s going on,” admitted one player on a meme post about the current state of the so-called “Alien War.”

Trends pop up in GTA Online from time to time, like the time when arseholes used nukes to kill players. But I’ve not seen a trend grow this fast and become this popular in some time. In a time when the game is seeing minimal updates, it seems a lot of players are creating their own fun.

As one player said on a post sharing a video clip of green and purple aliens fighting, “The alien war is the best thing to have happened to GTA free roam.” Considering the game is usually filled with trolls using exploits and jetbikes to annoy people, I’m inclined to agree