Gears Tactics, the don’t-call-it-an-XCOM strategy game out this week for PC, flips the long-running Gears of War series on its head. Where mainline franchise entries are all about shooting big guns and having big biceps, this game offers headier fare. Surviving the lengthy turn-based battles calls for a little bit of patience, a lot of tactical planning, and a dash of luck.

Like much of the rest of the franchise, sure, you can simply muscle your way through many of the early skirmishes. Then, at the end of the first act, you’ll find your squad face-to-face with one of the more formidable foes in Gears canon: a Brumak. Here are a few tips that will help you bring down the beast.

The team you face the Brumak with will be the same team you select at the start of Chapter 6. For that story mission, you’re forced to start with Gabe, Sid, and Mikayla, giving you just one slot to fill how you please. You might be tempted to choose a scout (in Gears, explosions are good and fun) or a backup support (an extra healer is never a bad idea). A word of advice: Bring your toughest heavy. You’ll be thankful for the impressive damage output.

Bonus tip: Whoever you bring, don’t let them die during the rank-and-file fights of Chapter 6. 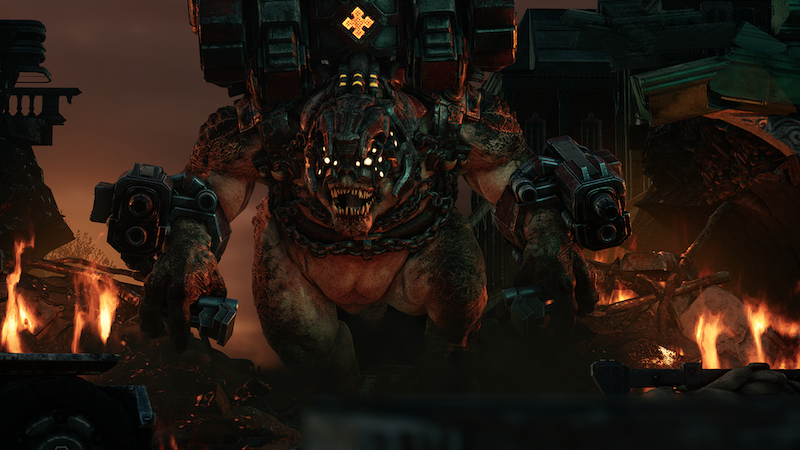 Hurt the Brumak by shooting its back.

You’ll deal all of your damage to the Brumak by shooting its back—specifically, three giant canisters of some lore-essential substance (don’t ask me, this story is a snore!) that keep it alive.

Shooting one of the canisters will whittle down the thing’s health, but it’ll also cause the Brumak to turn toward whomever fired the shot. So the strategy here is to put two people behind the Brumak and two people in front of it. Then it simply becomes a matter of passing shooting duties back and forth like you’re a recent Star Wars director passing script-writing duties.

A few other things: You don’t have to select individual canisters as targets. Your team will automatically fire at the one you need to take down, moving on to the next as you fight. In other words, each of the three canisters signifies a new stage of the fight.

Also, if a canister has just a sliver of health remaining (say, 50 HP), and you overkill it with a powerful shot (400 damage), that extra damage (350) won’t carry over into the next canister. Keep this in mind when you’re planning sniper shots and ability cooldowns.

Learn how to survive its moves.

There are three ways in which the Brumak can damage your team: It can shoot at you, it can step on you, and it can launch missiles at you. Here’s how to expertly avoid the whole arsenal.

The guns: The Brumak has a minigun on each arm. Each shot on its own doesn’t deal too much damage—somewhere in the 100 range—but the maths can add up, quick. As soon as you’re able, take out one of its arm cannons. They have staggering health (2,000 HP) but, in the long run, it’ll minimise your casualties.

Inspired players can go the extra mile and take out both cannons. Pulling this off means you don’t have to worry about finding cover for your Gears—since it can’t shoot directly at you—which can make finding advantageous positions far easier as the battle goes on.

The feet: If you’re within range of the Brumak, it’ll run toward you and stomp its feet like a hungry toddler. Not only will this deal a significant amount of damage to any troops in range, but it’ll also knock them back and interrupt any overwatch they might have set up. Keep a safe distance.

The missiles: At the end of its turn, every turn, the Brumak will fire missiles into the air. These missiles will then land with devastating effect at the end of your turn. The good news is that Tactics tells you where they’ll land by superimposing massive, can’t-miss, flashing red circles on the battlefield. The bad—or, rather, annoying—news is that these circles almost always show up directly under your team’s feet, forcing you to constantly move positions. 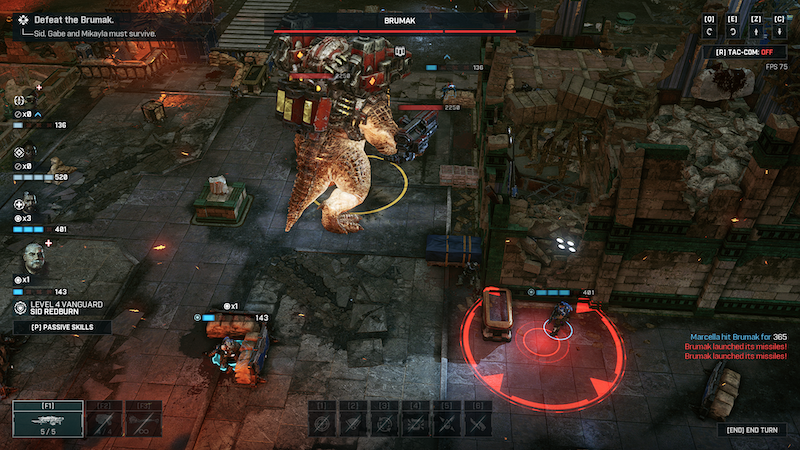 During the first stage, or canister, the Brumak will fire just two missiles, but that number will increase as the battle goes on—to three and eventually four. But hey, at least the explosions will wipe out any Locust caught in the blast zone.

That’s right: Other enemies make their way into the mix. That’s why you should…

Keep one grenade ready good to go at all times.

At two points in the fight, emergence holes—or e-holes, to use the game’s parlance—will pop up. Out of these holes pour waves of enemies. In standard missions, e-holes spawn all sorts of enemies. While fighting the Brumak, they’ll only spawn Wretches, which aren’t terribly imposing but are terribly annoying.

Wretches don’t have much in the way of health, but they can deal a lot of damage and can cover long distances in one turn. If you’re not careful, you’ll quickly get overwhelmed. Having an up-and-ready grenade ensures you can close an e-hole the minute it opens. And if you have two grenades good to go, you can use another one to eliminate a whole squad of Wretches before they can surround you.

The Wretches serve as more of a nuisance than an obstacle. You don’t have to kill them all. Once you take down the Brumak, the battle will end, and you won’t be responsible for the leftover Wretches. When the Brumak is low enough health to take out in a turn, focus all of your efforts on it.

Just a heads up: You’ll get a checkpoint after the second e-hole pops up, roughly halfway through the second canister-stage. Try to plan your troop placement knowing that. Few things are more mordantly maddening than having a checkpoint save at the most inopportune moment. But this is the Gears universe we’re talking about. No matter how well you plan, the checkpoint will only save when Sid, a character whose death will cause a game over, is cornered by five Wretches and one very angry Brumak.