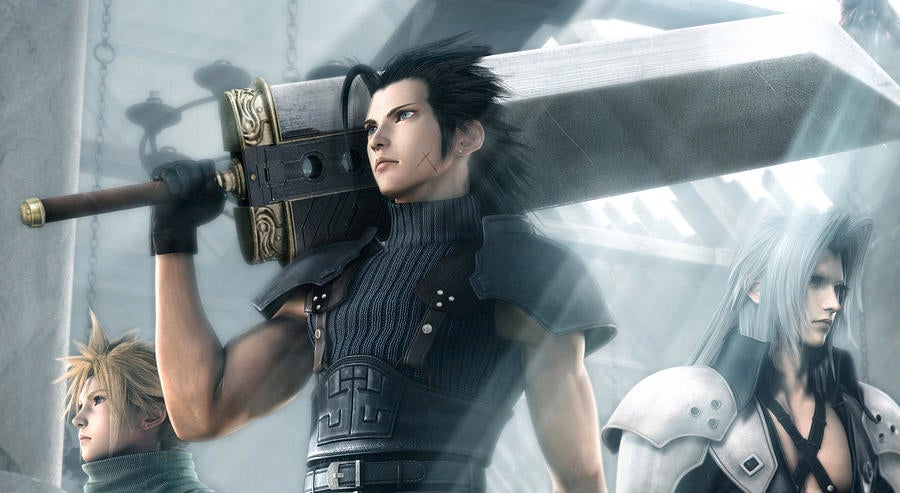 Yesterday, I finished Final Fantasy VII Remake. Today, I find myself wanting more, but only a little more. Maybe another 15-20 hours in and around Midgar, seeing the surrounding slums and deserts through the eyes of somebody who’s more relevant to the series’ larger machinations than ever? Something along those lines? I don’t know, just spitballing here.

Oh, I just described Crisis Core: Final Fantasy VII, a game that already exists. Good news for me. The 2007 action-RPG stars Cloud’s mentor in both life and hair, Zack Fair, and unlike so many other Final Fantasy VII spin-offs, it’s actually good! Or at least, I remember it being good. Maybe the me of now would enjoy it markedly less than the me of 13 years ago; I honestly don’t know, but I’d love to find out.

Just one problem: Crisis Core remains confined to the PlayStation Portable, a platform Sony ceased manufacturing in 2014. I have no idea where my old PSP is. I have not thought about my PSP in probably nine years. It is entirely possible that the last game I played on my PSP was, in fact, Crisis Core: Final Fantasy VII. Since the last time I remember having seen my PSP, I’ve moved to new apartments, cities, and states a total of seven times. On top of that, the PSP was a fragile machine. Wherever it is, mine is probably dead. RIP. RIPSP.

Buying a used PSP and copy of Crisis Core wouldn’t be that big of a hassle in the grand scheme of life, and emulation is always on the table, but neither of those are options for everybody, and we sadly do not live in a world where companies release source code to old games and allow their communities to steward them forward indefinitely. As such, I think you know where I’m going with this: It’s time for a remaster of Crisis Core—or at least a version of the original that runs on modern platforms. I’m not just saying this because I personally enjoyed Crisis Core, either. Unlike Dirge of Cerberus, a third-person shooter that should remain buried forever, and Before Crisis, a Japan-only mobile RPG whose events are lightly referenced in Remake, Crisis Core ties very directly into Final Fantasy VII Remake’s story.

Near the end of Remake, the player receives a handful of plot revelations that deviate significantly from the original Final Fantasy VII. In one, the game flashes directly back to the final scene of Crisis Core, in which Zack makes a defiant last stand against endless hordes of Shinra goons. In the original, he dies defending Cloud, who then proceeds to Midgar, Zack’s buster sword in tow, and attempts to fulfil his and Zack’s shared goal of becoming a mercenary.

However, in Remake, Cloud, Aerith, Tifa, Barret, and Red XIII fight the Whispers—embodiments of fate itself—and win, altering the timeline. A couple scenes near the end of the game suggest that, in the new timeline, Zack survives his fateful encounter, carries Cloud to Midgar, and then disappears to whereabouts unknown. Presumably he will play a big role in the sequel to Remake, which Square Enix had better call Disc Two, because come on, it’s so obvious.

While Zack was integral to the plot of the original Final Fantasy VII, these particular scenes—evocative of Crisis Core, specifically—hit differently if you’ve played the Zack-focused PSP prequel. Zack is, for a variety of reasons, everything Cloud strives to be, but Crisis Core also reveals that he’s everything Cloud is not: upbeat, expressive, in touch with his feelings, kind of a goofball. He’s a fun character, and his death in Crisis Core is one of the most memorable I’ve encountered in a JRPG, making creative use of the game’s off-kilter battle system to play back a selection of the unsung hero’s triumphs and regrets. Seeing him survive had a more powerful impact on me than many of Remake’s other pivotal ending moments. I’d love for other players to be able to have that connection to Zack—or, for those like Kotaku’s own Ian Walker, whose intro to FFVII was Remake, to even have the faintest grasp on who Zack is.

That only scratches the surface of Final Fantasy VII Remake moments that wouldn’t have made a ton of sense to me if I hadn’t played Crisis Core 13 years ago. It’s also just a fun game, with a slot-machine-inspired battle system that still strikes me as impressively clever all these years later. I’d love to relive it, especially given that we’ll probably end up waiting at least a few years until Final Fantasy VII Remake Disc Two comes out. So come on, Square Enix: A little Crisis Core re-release? As a treat?