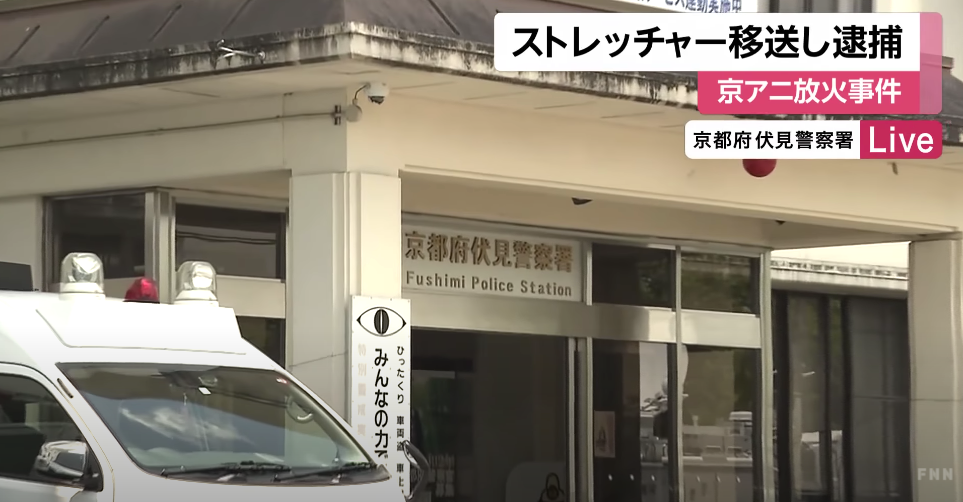 Screenshot: <a href="https://www.youtube.com/watch?v=eooxBwayPL4">FNN</a>
To sign up for our daily newsletter covering the latest news, features and reviews, head HERE. For a running feed of all our stories, follow us on Twitter HERE. Or you can bookmark the Kotaku Australia homepage to visit whenever you need a news fix.

Today in Kyoto, police finally arrested 42-year-old Shinji Aoba for allegedly carrying out last year’s Kyoto Animation arson attack. The authorities waited until Aoba recovered from his own serious burns before placing him in police custody.

Aoba is believed to have lit the fatal fire at around 10:30 AM on July 18, 2019 that set Kyoto Animation’s No. 1 studio set ablaze. Thirty-six employees died in the attack, and another 33 were injured—one of which is still in the hospital. Aoba’s face, upper body and limbs were badly burned in the fire, and The Associated Press reports that he was unconscious for weeks after the incident. Apparently, he still cannot feed himself or walk on his own. Today he was arrested at the hospital where he had been treated and had to be wheeled into Kyoto’s Fushimi police station (above, pictured) on a stretcher. The police waited until he was able to respond to questions, with NHK adding the wait was longer than initially expected. According to The Associated Press, Japanese police also waited until the country’s state of emergency over the novel coronavirus pandemic was lifted.

The site where the studio stood issued a statement about the arrest, stating that no apology or explanation will ever bring back those individuals who perished. The studio added that it had nothing to say to the suspect.

Formal charges are expected to be pressed against Aoba in the near future.