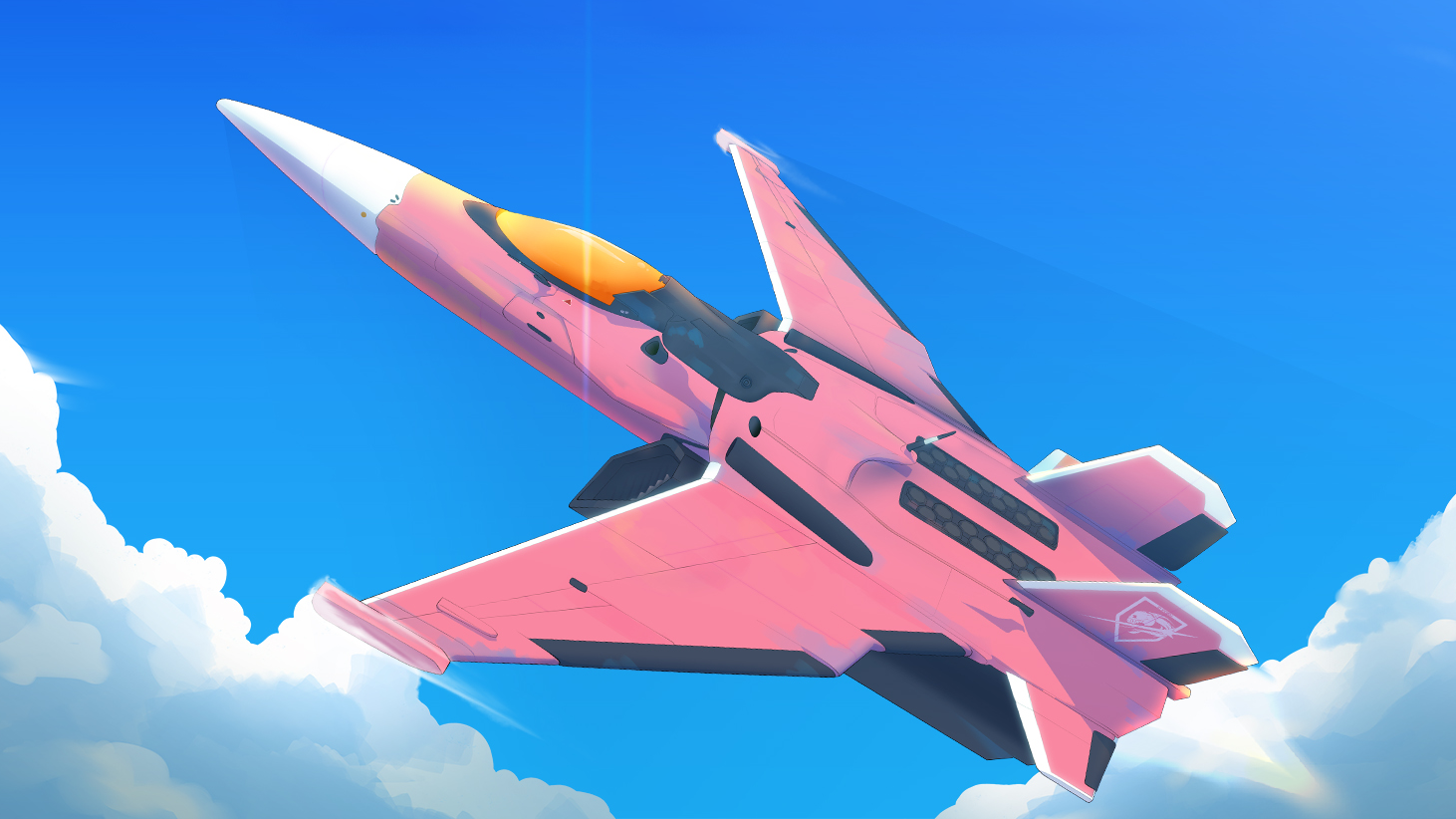 Come for the stylish, retro graphics, stay for the tight controls and thrill of blowing your enemies’ faces off when you snap on your after-burners at just the right moment.

I didn’t know anything about Jet Lancer when I first started playing it except that its tiny red fighter jet and azure skies made me think of Wave Race 64 if someone had shrunk it down into an 80s arcade shooter like Time Pilot. Created by indie developers Vladimir Fedyushkin and Nicolai Danielsen under the studio name Code Waker and released last week on PC and Switch, Jet Laner is an aerial combat game where you fight sky pirates opposing battleships in order to try and keep the maritime peace. 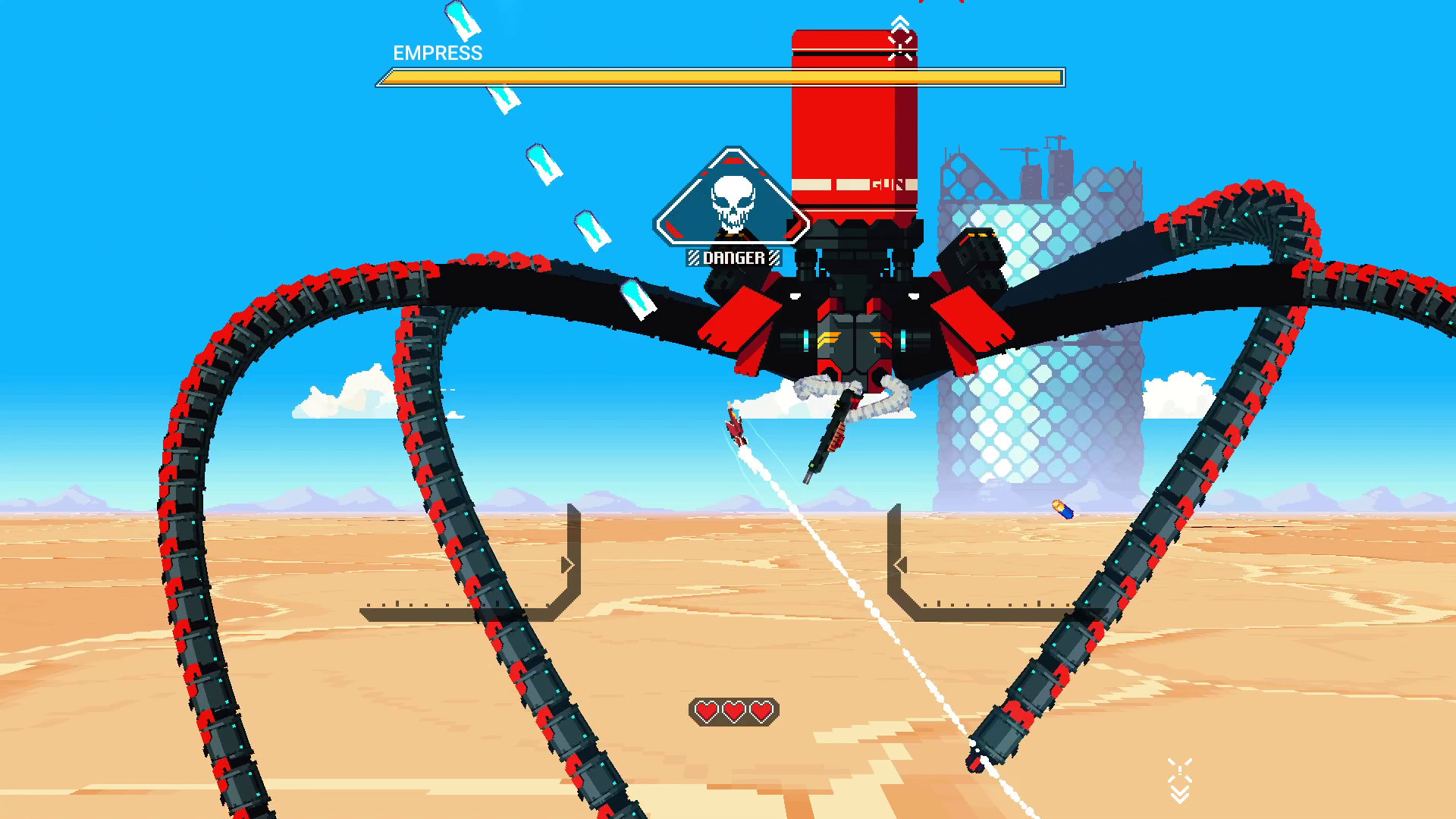 There’s also a talking cat who acts as your mechanic and your fighter jet happens to be haunted by a strange prototype AI. At its core though Jet Lancer is about looking stylish and feeling like a stunt-double from Top Gun while blowing up anything that tries to kill you.

A gatling gun lets you fire a stream of bullets in whatever direction you’re facing while a secondary weapon can be charged up to unleash a flurry of homing missiles that sizzle through the air like silly string made of TNT. These weapons are mounted onto a nimble aircraft that fly in any direction and turn on a dime. You can even do a 180 and fire behind you while inertia still keeps carrying you in the opposite direction for a while.

The laws of physics apply, but just barely, making you feel tethered to something real but with plenty of slack to play with. And then there are the afterburners which you can throw on to boost forward as well as damage whatever’s immediately behind you. This means you can hurtle toward an enemy, reverse direction while still coasting toward them, and then blast off the other way to blow them up. It’s rarely efficient, and yet always so satisfying.

In addition to looking like 80s Japanese City Pop album art and playing just as breezily, Jet Lancer has a number of modules you can earn to customise your aircraft, from adding lasers and bombs to swapping out a barrel roll dodge for a linear quick dash. Not only do these modules let you approach fights in different ways, they also give Jet Lancer the feel of a top-down action game at times. A lot of the same survival instincts that come into play in something like Dead Cells are a virtue in Jet Lancer as well, with expertly-timed dodges momentarily doubling your rate of fire to reward aggressive play. 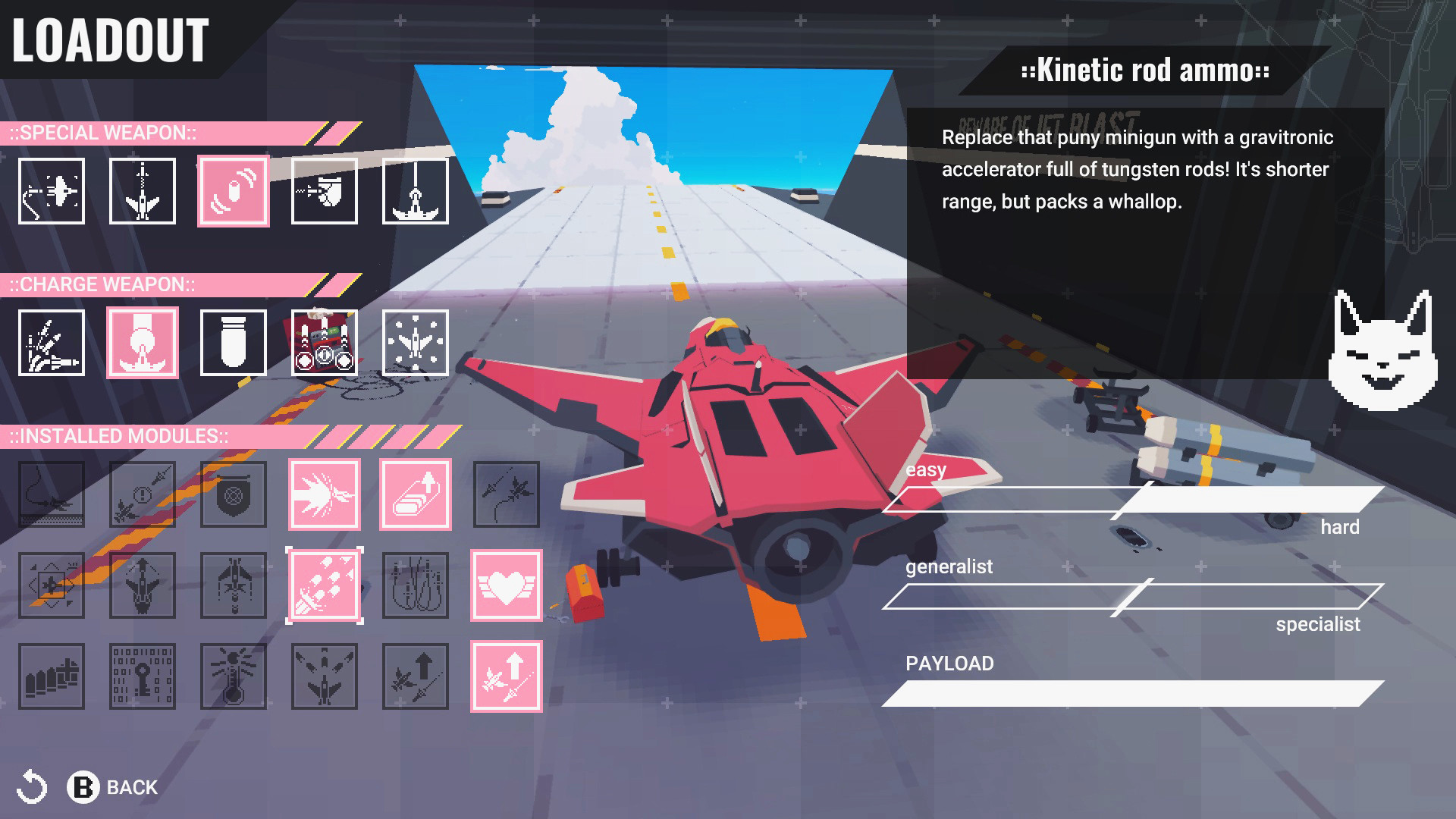 At the start your jet is outfitted with safeties that prevent you from flying into the ocean or warn you when an enemy has locked onto you, but you can also ditch these to equip better offensive capabilities and up the challenge as well. Alternatively if you just want to have fun blowing stuff up while gliding over the water you can turn on an invincibility mode instead.

A lot of this makes Jet Lancer feel like a more vibrant-looking Luftrausers, just without the vaguely Nazi-inspired visual trappings. That’s not a bad thing at all given how few games there are like Luftrausers, which itself is already six years old. But what helps give Jet Lancer a personality of its own are its varied boss fights. Every so many missions you’ll encounter a mysterious piece of machinery—a giant floating eyeball-like orb or a mechanical sea serpent—that change-up combat and call for unique strategies. There’s even a mirror-match against two other jets just as agile as yours that requires you to shift from bombing stationary targets to fighting while flying backwards. 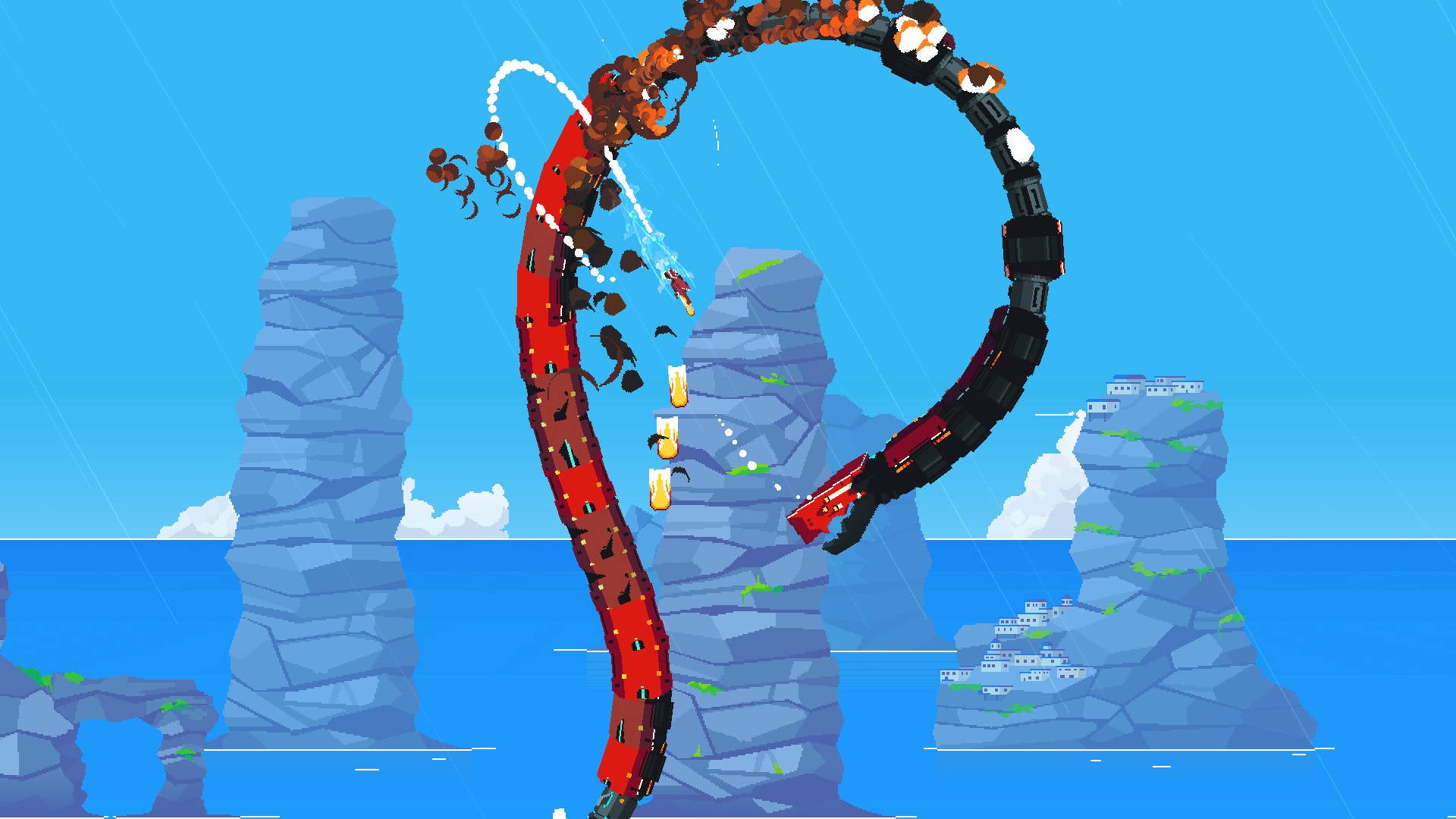 Taken all together Jet Lancer is nailing a vibe I didn’t know I needed right now, namely a twitchy arcade game full of bright colours and snappy fights stitched together by a lowkey anime storyline. The upbeat soundtrack by musicians Zach Fendelman and Patrick Crecelius. It’s fast-paced pop rock is perfect for fighting giant robot spiders while chill, in-between missions music helps make my anxiety melt away. Though a little on the short side, it’s always good when a game leaves you wanting more and I’m already ready for a Jet Lancer 2.