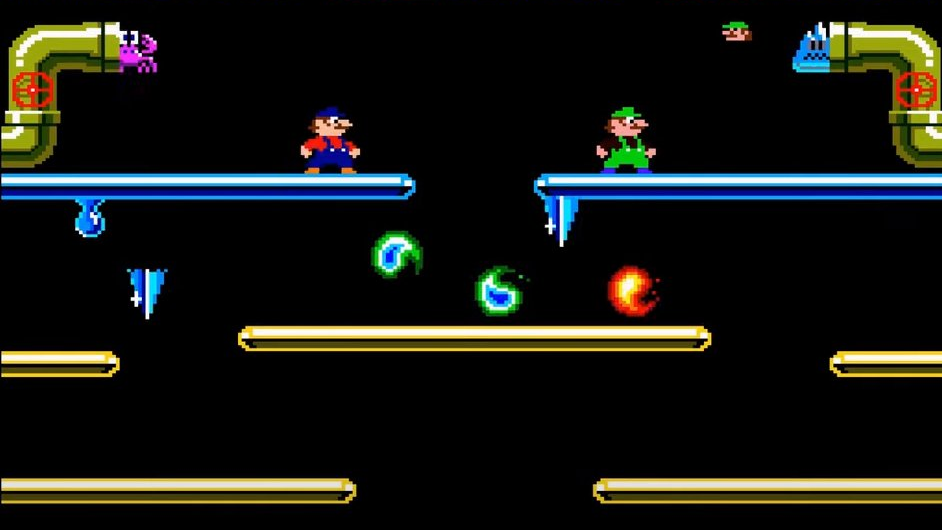 Steven Kleisath and Stephen Boyer are no slouches when it comes to Nintendo’s original Mario Bros. platformer. Recently they achieved something truly spectacular, reaching a high score of 1,280,550 while playing the game cooperatively over long distance.

Unlike its linear and better known successor Super Mario Bros., 1983’s Mario Bros. is an arcade game where players hop around a single-screen arena dodging fireballs and knocking enemies upside down by punching the platform they’re standing on from below. The hazards build up quickly, and if players don’t run into the enemies they’ve knocked over they’ll eventually get back up and cause trouble all over again.

It’s a challenging enough gauntlet on its own, but trying to survive the experience coop comes with its own challenges. As reported on the Twin Galaxies record keeping site, Kleisath and Boyer managed to not only make it to the second to last level in the game while playing on the hardest difficulty, they also racked up over a million points in the process, setting a new milestone in the unofficial category.

Both players are existing Mario Bros. record holders. Kleisath has a high score of 5,424,920 million points on the original arcade version, and Boyer has a record of 4,260,210 points in the WolfMame emulator version. The records date back to 2015, and since then the two have defined the game’s top tier of competition. They only decided to try to combine their efforts again recently when a new version of the MAMEhub emulator for PC made it possible for them to play cooperatively online.

“We definitely pushed the limits of this game to its final frontier with this variation and I doubt any other two people in the world today will be able to match or beat this score,” Kleisath told Kotaku over Twitter direct message. “We were trying to break a million and wound up getting over 1.2 million.”

The two communicated over speaker phone for the duration of the roughly 70 minute extravaganza, overcoming some added lag as a result of the online connection in addition to self-imposed restrictions against utilising the POW block in the centre of the level to quickly clear large groups of enemies.

The pair’s Mario Bros. prowess was on special display during the game’s 53rd phase (there are 99 total, after which the game just continues looping the last phase). “Everything starts out normal until Mario needs to clean up the last crab and he has a red fireball down below which is coming up at the same time the pink crab is heading down,” Kleisath’s partner, Boyer, told Kotaku via Twitter. “The game is setting Mario up for what we call a death trap. With nowhere to go, Mario heads to the middle level in order to survive. At this time Luigi actually saves Mario’s life by dropping down and knocking out the ice which would have probably killed Mario and ended the game.”

In addition to making it further on hard mode than they might individually, the coop aspect added an extra dimension of drama.

Kleisath lives in Florida, while Boyer is in South Carolina. Even if one of them had wanted to travel, the ongoing pandemic would have made a local attempt impractical and potentially dangerous. “We wanted to give an example on this during this time of pandemic and being home more than usual the limits that can be pushed on this game,” Kleisath said. “Like a display of game play if you will.” Mario Bros. can be played online on Switch, but neither owns one, and, given the console’s ongoing shortages, tracking one down would have been a challenge in and of itself. Fortunately, the MAMEhub emulator was updated with new online support back in March, just as states across the country were beginning to shut down.

When things eventually open back up, Kleisath said the duo hopes to marathon the Japanese version of the game together live at an expo or arcade. Until then, they’re inviting others to try their hand at the decades old classic. “We welcome anyone and everyone to try to give proper acknowledgement to this great game and have fun with it,” he said. “You can work together or try to kill each other in two player mode but we chose to work as a team to achieve the impossible.”