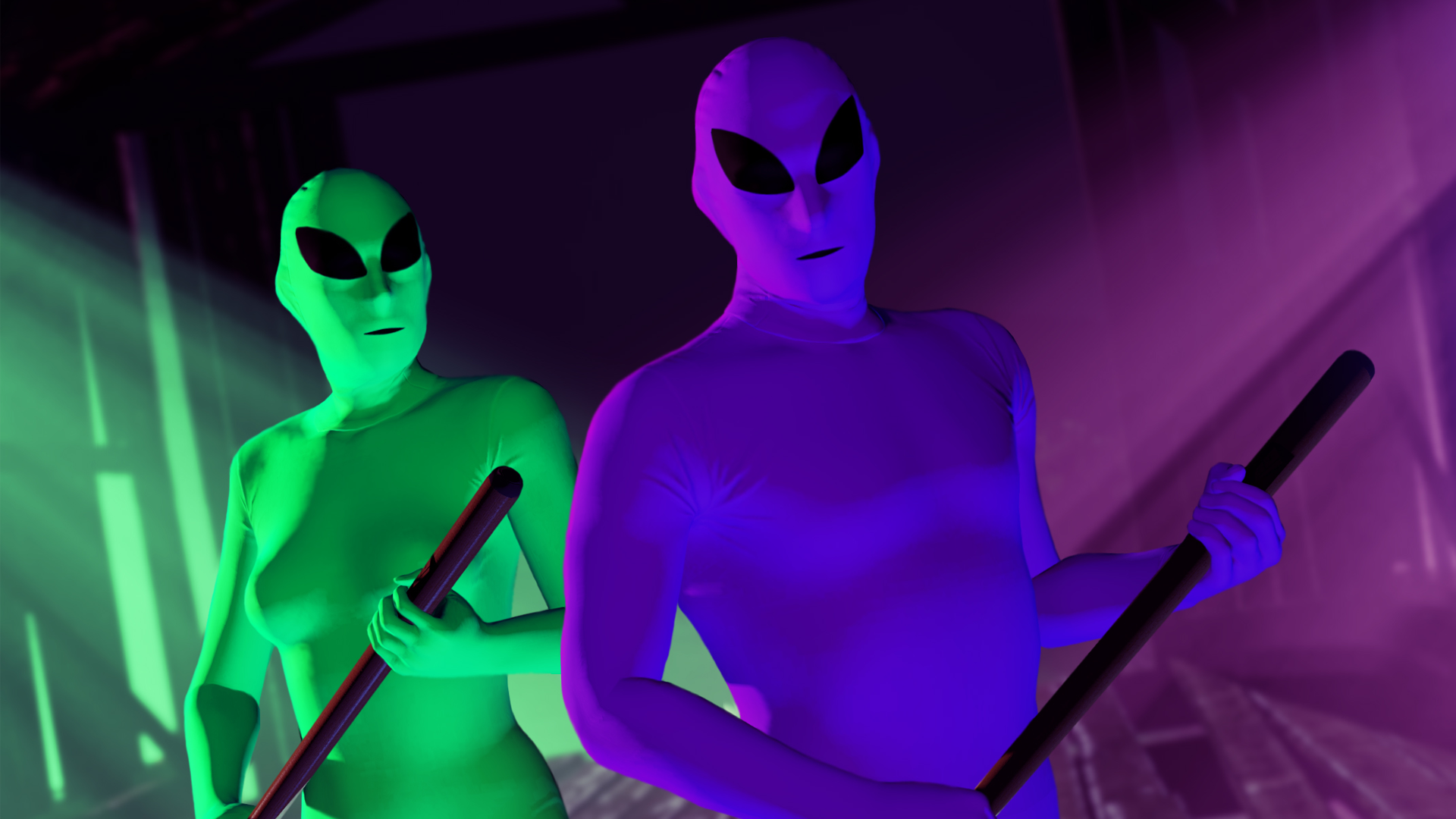 Which side are you on? (Screenshot: Rockstar Games, <a href="https://twitter.com/RockstarGames/status/1258758597296689152">Twitter</a>)
To sign up for our daily newsletter covering the latest news, features and reviews, head HERE. For a running feed of all our stories, follow us on Twitter HERE. Or you can bookmark the Kotaku Australia homepage to visit whenever you need a news fix.

The Alien War in Grand Theft Auto Online has continued since we last reported on it over a week ago. And now Rockstar is officially supporting the war and offering players both alien suits for free.

As with most wars, tracking down the exact moment the conflict began is impossible. But over the last few weeks, the war between purple and green aliens in GTA Online has grown. What started out as a small conflict between some players has become a large scale war between thousands.

Since we last checked in on the current state of the war back on April 30, the community around it has also expanded. There are now multiple subreddits dedicated to the ongoing conflict and some of these groups have thousands of members already. What makes all of this so impressive its that this war wasn’t created by Rockstar via an in-game event. Instead, this was created completely by fans via viral posts and videos.

Yet while this started as a fan-created event, Rockstar has now officially acknowledged the war. The Rockstar Games Twitter account tweeted yesterday that for the next week both the green and purple alien suits will be free to all players. In their tweet, they also reference the current conflict stating “Grab yours and join the fight…”

Green and Purple Martian Bodysuits are free in GTA Online all week long.

Grab yours and join the fight – available from any clothing store by going to Outfits: Arena War > Bodysuits.

Plus pick up a Pool Cue from Ammu-Nation for free until May 13. pic.twitter.com/PUkUYB3B3g

Of course, as this war has continued and keeps getting bigger, some players have pushed back and created counter groups and are trying to eradicate the aliens. Other players are just tired of the whole thing and want it to end.

Personally, I think the Alien War is a fun time for the game and its nice to see the community and Rockstar coming together to organically create an in-game event. And with Rockstar giving away free alien suits, I don’t think this war will be ending anytime soon.