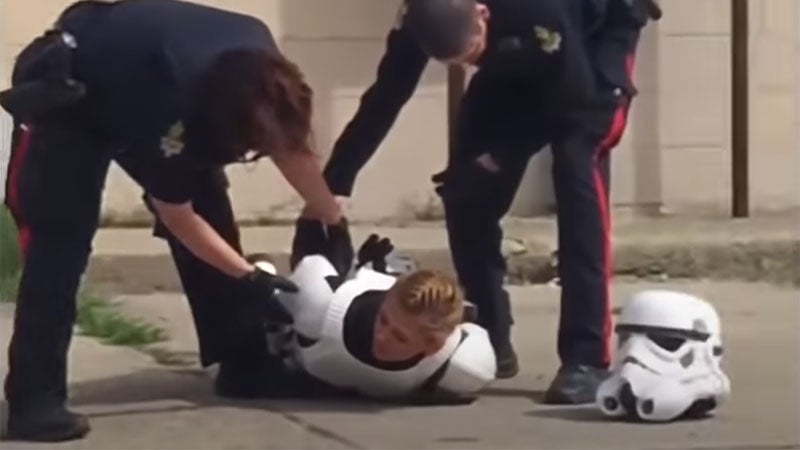 A restaurant in Lethbridge, Canada last week thought it’d be fun for an employee to stand outside dressed as a Stormtrooper to celebrate Star Wars Day on May 4. Instead, the woman in the costume ended up getting the cops called on her and her nose smashed up before being arrested.

As LNN report, the incident took place last week when the unnamed employee, dressed in full Stormtrooper costume (complete with plastic blaster rifle) and standing out the front of the restaurant, became the subject of two emergency calls from passers-by who were a) concerned at the presence of what they thought was a weapon, and b) had somehow never seen a Stormtrooper before.

Police soon arrived at the scene, drew their guns and ordered the woman to first drop her “weapon” before getting onto the ground. While the employee immediately discarded the blaster, she took some time getting to her knees, so the attending officers grabbed her and pushed her to the ground and handcuffed her, giving her a “bloodied nose”.

While Canadian Police, and Canadians, will no doubt still be reeling from the Nova Scotia shootings last month, which killed 22 people, this was still a bizarre overreaction from the attending officers, who are now the subject of a “service investigation” from the Lethbridge Police Service.