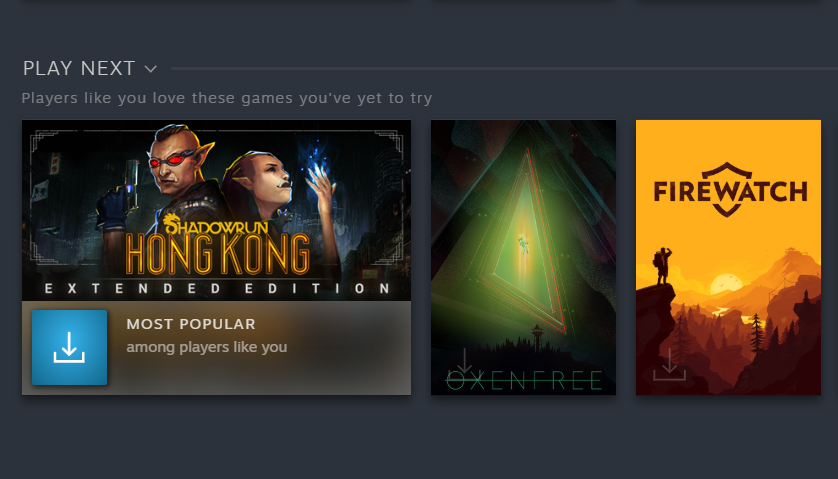 Steam’s latest new feature is undeniably useful: The “Play Next” library widget generates a list of games already in your possession that you might be interested in trying. As someone who has a miniature existential crisis every time I finish a game, it’s perfect for me.

This week, Play Next graduated from Valve’s experimental Steam Labs section to the main client. By default, it appears near the top of your Steam library page. It is, like so many other elements of Valve’s ubiquitous borg hivemind PC gaming platform, algorithmic in nature. It bases recommendations on the playing habits of “players like you.” Right now, you can scroll through a finite list of recommended games, all of which you have either never played or haven’t spent much time with.

My list is pretty good, but as with other Steam algorithm-driven initiatives, it skews pretty heavily in favour of well-known games. For example, the most popular game among players like me—and I’d really love to have access to information on how Steam categorizes me—is apparently Shadowrun: Hong Kong. I play a lot of tactics games and RPGs, and I adored Hong Kong’s predecessor, Dragonfall, so this selection makes a lot of sense.

There are also other games on the list that I’ve been meaning to get around to for literal years: Subnautica, Invisible Inc, the rest of Kentucky Route Zero, and Oxenfree. Additionally, it zeroed in on a few games—Firewatch, Grim Fandango, and Hollow Knight—that I’ve previously played outside Steam, but that would certainly be good recommendations if I hadn’t already finished them. A couple exceptions aside (I have never played a Souls-like on Steam, so I’m not sure why it’s recommending multiple Dark Souls games), the system seems to have me pegged pretty well.

That said, there’s only one game on my whole list that I would even describe as slightly obscure—in other words, that I wouldn’t have thought to play myself, without Steam’s assistance. It’s a 2015 sci-fi exploration game called Cradle, and I guess I picked it up out of curiosity? To be honest, I’m probably not gonna play it, but I would love to see Play Next surface more games that I haven’t thought about in a minute. Or years. There are countless clever indies in my library that deserve more love, and I’m sure I’m not alone in that.

I imagine Valve will tweak Play Next over time, and it will naturally evolve as it collects more data. And while I don’t think it’s quite a homerun as-is, it did knock one selection out of the park: Tonight, I think I’m finally gonna fire up Shadowrun: Hong Kong.