Over the years, the universe of Star Wars has spawned countless video games. Some, like Masters of the TerÃ¤s KÃ¤si, were pretty bad.

Star Wars has been the basis of first-person shooters, third-person shooters, action games, flight simulations, real-time strategy, and even point-and-click adventures. But only once in Star Wars‘ nearly 40-year history has it produced a fighting game. In October 1997, however, LucasArts decided it was a good idea.

Set between the events of A New Home and The Empire Strikes Back, the Galactic Empire is super pissed and wants revenge against Luke Skywalker and his buddies. They enlist the help of Arden Lyn, a female character created for the game and creepily eyeballed by Luke at the top, to finally take them out.

Or, as put by the series’ trademark scroll:

After the stunning defeat and loss of the Death Star handed to the Galactic Empire, the Emperor demands drastic measures for a swift retribution against the Rebel Alliance.

The Emperor calls upon the services of a mysterious young woman, Arden Lyn, wise in the ways of an ancient and almost forgotten fighting art know as teras kasi.

Under the watchful eye of Darth Vader, Arden Lyn is assigned the duty of eliminating key members of the Rebel Alliance and thus neutralising the thorn in the Empire’s side. But the Alliance hears of this threat and the prepare for battle…

Do we really need to a lore-driven reason to justify characters beating each other up? Wait, you’re telling me Tekken 7 has an ongoing story? OK, whatever.

Masters of the TerÃ¤s KÃ¤si was released during a particular high for Star Wars games, with Dark Forces II coming out only one month prior, and Shadows of the Empire (aka the game with the Hoth stage) having hit the N64 the year before.

This game was, unfortunately, not one of the good ones. 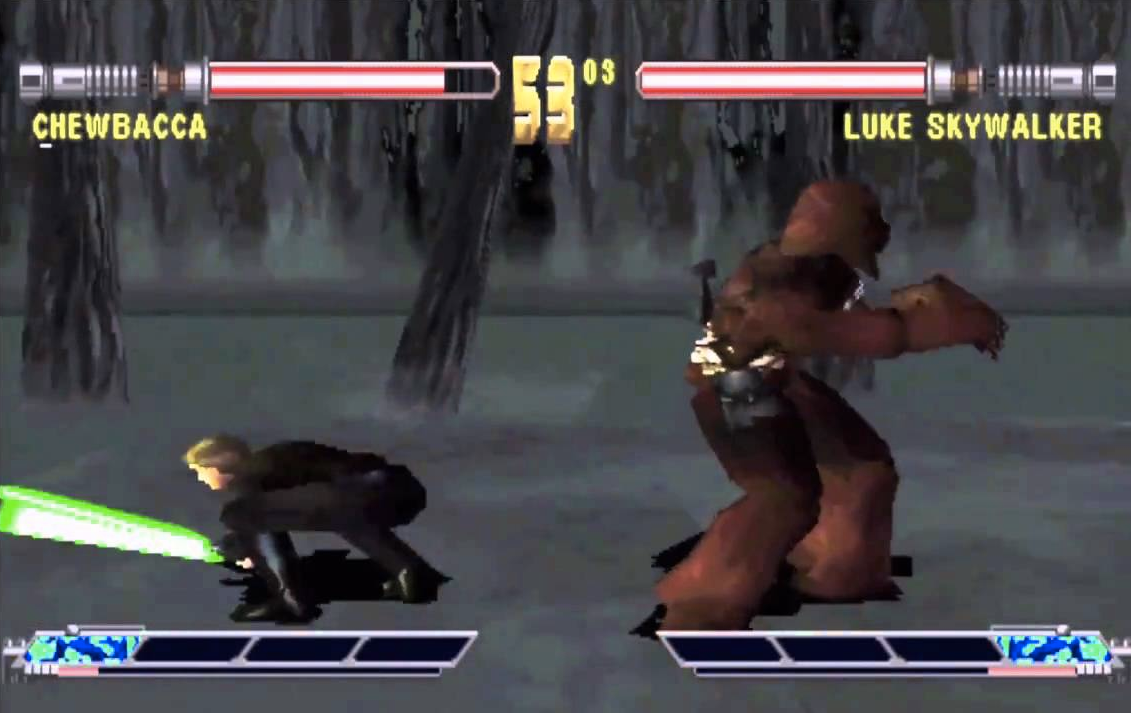 It was a bad fighting time during a time when there were lots of better options out there, with little to offer beyond the novelty of watching Star Wars characters beat the crap out of each other. Sluggish, boring, and without much depth, it was quickly brushed under the rug, to only be remembered in articles like this.

As with most fighting games, each of the characters had their own, unique ending. It’s cool to imagine a version of Star Wars where Vader wins, I guess?

Unsurprisingly, reviewers were not kind to the game at the time.

Giant Bomb‘s Jeff Gerstmann, then of GameSpot, scored it a 4.4:

“The game itself plays like it’s stuck in slow motion. The characters don’t move very well, the moves and combos are sluggish and uninteresting, and the force powers make the game very unbalanced. One of Luke’s force powers is to throw his light saber at his opponent, which jacks the victim up for around half of his life bar. The move is also unblockable and unavoidable. So if you’re fighting a fully charged Luke, you have to stay close at all times, or else you can just kiss half of your life goodbye. This and other annoying moves (Boba Fett’s got one that makes missiles rain down from the sky, pounding his opponent into the dirt) make the game frustrating in all modes.”

Gerstmann still feels that ways, too:

“Fighters must have split-second response — it’s what made Tekken 2 so brilliant. Masters of Teras Kasi, however, feels like the characters are made out of lead, both in speed of response and animation. I ended up mashing the buttons more than one time hoping the harder I pressed the quicker they’d respond. No such luck. Watching the fighters move is almost like watching animated versions of the Kenner toys. Head tracking is poor and the movements are terribly stiff.”

Douglas also called the game’s premise “brilliant.” Make of that what you will.

What is terÃ¤s kÃ¤si, exactly? It’s a fighting style first mentioned by sci-fi writer Steve Perry in the 1996 book Shadows of the Empire. The book was part of an ambitious multimedia project by LucasFilm, which included the N64 game.

It was an idle mention, but Perry spoke with Star Wars Galaxies fansite TerasKasi.net in 2005, explaining a little bit more about how it all came about:

“The name, as you figured out, came from Finnish, but doesn’t really mean anything other than ‘steel’ and ‘hand(s).’ I don’t speak the language but wanted something with a certain kind of sound, and the Norse languages have the kind of rhythm I like. (In my Matador novels, I did the same thing with spetsdod, which was a pair of Swedish words, ‘point’ (as in ‘sharp end’) and ‘death.'”

Even Perry isn’t really sure who came up with it in-universe, though.

“I figured that teras kasi came to pass by somebody trying to come up with a more efficient fighting art, probably as an answer to one that was already around, which is how most of them seem to be created. The originator (whom I haven’t thought about, really) would have been an adept in other arts, and he (or she) would have looked for holes in those and devised ways to fill them. Got your butt kicked by a Jedi, you’d want to come up with ways to keep that from happening again.”

As mentioned earlier, the game’s villain, Arden Lyn was a new character. LucasArts realised Star Wars wasn’t overflowing with women to put in the game.

“With this game, aside from Leia there was definitely a drive to get another strong female character,” said production manager Camela Boswell to Star Wars Insider in February 1998. “That was part of getting Arden Lyn off the ground.”

The character was woven into the Extended Universe, with Lyn showing up in the books The Emperor’s Pawns and Dirty Dozen: Imperial Grand Admirals. (Extended Universe has been disbanded, starting with The Force Awakens.)

You might have picked up by now that Masters of Teras Kasi did not become a franchise, and Star Wars stayed away from fighting games for a while. “For a while” isn’t forever, but it took more than 10 years before it returned in 2008.

For one, there was the Wii exclusive Star Wars: The Clone Wars -Lightsaber Duels. I dare you to say that name ten times fast.

Then, it licensed out Yoda, Galen Marek, and Darth Vader for Soulcalibur IV. (Galen Marek was Darth Vader’s secret apprentice from in The Force Unleashed.) At first, Yoda was exclusive to Xbox 360, while Darth Vader was exclusive to PS3, but both showed up on the other machine as downloadable content a few months later. Marek, however, was an unlockable character in both versions.

(Thanks to Life and Death for this intro clip.)

Star Wars hasn’t been seen in a fighting game since, but how come Masters of Teras Kasi isn’t on PSN yet? It’s time!