The Games MicroProse Should Remaster First

MicroProse is back, and it’s headed up by an Australian. That’s good news, but not as good as the news that the company is looking at remastering some of its older classics. While that doesn’t mean we’re liable to get a remastered Civilization 1 or anything, the iconic publisher has a ton of great games that definitely deserve another day in the sun. Still the best video game adaptation of a card game ever made, MicroProse’s Magic: The Gathering was one of two video game spin-offs Magic got in the late ’90s. But instead of turning Magic into an action game, MicroProse took the original Magic mechanics and created an RPG with light management mechanics.

As the player, it was your job to free the world of Shandlar from the ruthless wizards controlling each of the five colours of magic. As you went around the world, you’d encounter various minions representing each of the wizards. Beat them in combat, and they would give up crucial cards to help you grow your ever powerful deck. Explore further, and you’d find dungeons containing some of the most broken Magic cards ever made.

I don’t know if Wizards of the Coast would ever greenlight a remaster of MicroProse’s game, but they are certainly are a lot more open to video game adaptations of Magic these days. I still think it’d be pure genius for Wizards to remake Shandalar with modern Magic: The Gathering sets, though. 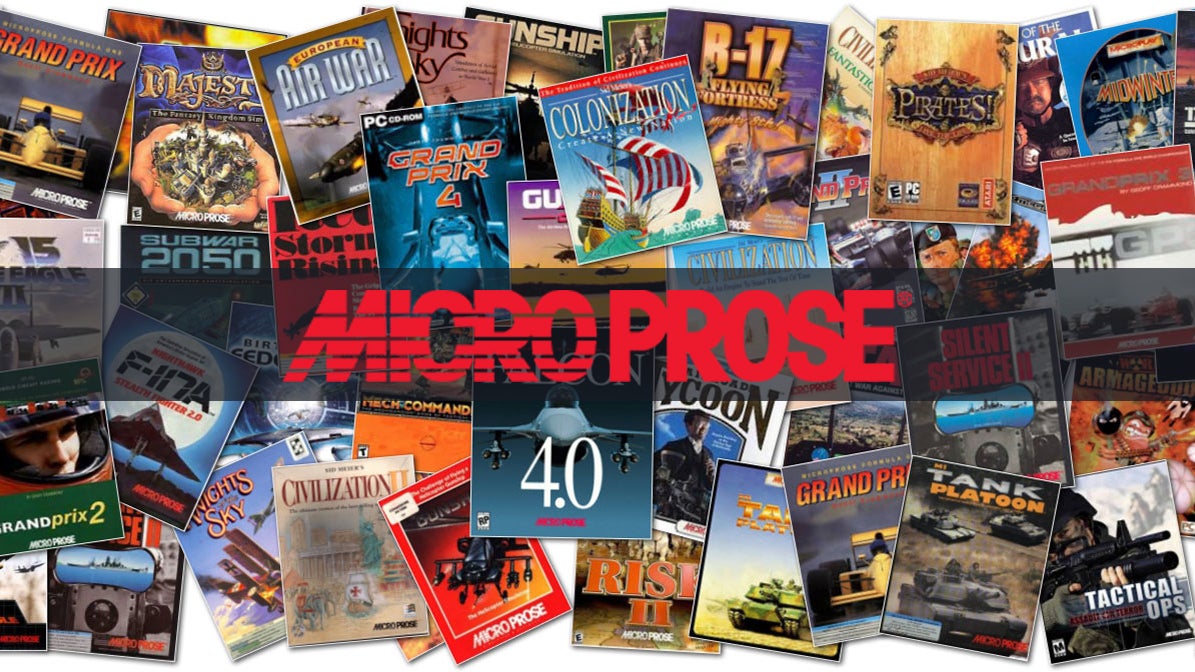 Founded in 1982 by game industry legends Sid Meier and Bill Stealey, developer and publisher Microprose released some of the greatest military simulation and strategy games ever made. After nearly two decades defunct, the Microprose name returns, with a trio of new strategy and simulation games in the works.

Activision published the first two MechWarrior games alongside the expansions, while Microsoft took over publishing rights for MechWarrior 4. Microsoft still owns the license for the BattleTech franchise, however, and that involvement might make a remaster fairly complicated.

Either way, it’d be nice to have one of the older Mechwarrior games back with their branching campaigns.

Sword of the Samurai A neat combination between a tactics game, management sim, top-down action game and 1v1 sword duels, Sword of the Samurai forces you to earn the title of Shogun by uniting all of Japan’s warring 48 provinces. You can play and download Sword of the Samurai today, but you need a touchpad to play it properly, which is a right pain in 2020.

Sword of the Samurai has a lot of systems that work just fine for a remake. You get the choice of holding tea ceremonies for various lords, you can pick from various samurai to recruit, some of whom will die in battles with their swordmaster. You can donate lands to local temples to curry favour, and can sneak into your enemies’ estates to assassinate them.

It’s a great title to remaster because so many of the controls could use an update for modern devices. Even porting it to tablets or phones with the existing graphics could be an interesting addition.

Classic platformers probably weren’t what the Bohemia Interactive CEO had in mind when it came to restarting the MicroProse brand. But it was one of those seminal games that somehow struck a chord back in the day – for whatever reason, David Cage really loves it. The Amiga version was hugely popular in the late ’80s and was one of the first hits from the studio that would go on to make the Tomb Raider series.

It wouldn’t be my first choice when looking at MicroProse’s classic titles, but I know a lot of older gamers who adored the publisher’s Indiana Jones knock-off platformer. Remastering it also wouldn’t be a huge job for a small studio, which might be the kinds of deals MicroProse would prefer to do over the next couple of years until the brand re-establishes itself.

A polygonal space exploration game where you are searching for a planet that humanity can colonise. Along the way, you’ll run across sentient AI races, tribal warring species, various planets to mine and explore, and different alliances that you can make along the way.

Lightspeed received a sequel in the early ’90s called Hyperspeed, although the rights to the sequel were purchased by US company Tommo. They’ve since been working with Night Dive Studios and other partners to make parts of MicroProse’s back catalogue playable through Steam and GOG, but no work has been done on any remasters so far.

The other bit of sense here is that MicroProse has talked about adding adventure games to their slate, even though the best of MicroProse’s point-and-click adventures are now owned by other publishers. Lightspeed could fit within that remit.

Touching up Falcon 4.0 makes total sense for MicroProse’s initial direction, and it’s also one of the games that didn’t change hands as part of the Atari bankruptcy proceedings in 2013.

Falcon 4.0 is still available today on GOG as part of the Falcon Collection, but a basic remastering and upscaling to 4K wouldn’t hurt the game one bit. Interestingly, Retroism is listed as the company behind the game on GOG, which makes me wonder if there’s some outstanding agreement or relationship between Retroism/Night Dive/MicroProse.

Published in 1991, Twilight 2000 is one of those MicroProse games that got buried under the avalanche of bigger names like Civilization and Rollercoaster Tycoon (MicroProse published the first title, but Atari took over duties afterwards and still retains the rights today).

Twilight 2000 is an isometric game that’s functionally similar in spirit to Jagged Alliance, with some more survival elements. With the revival and interest around tactics-based games (thanks to the success of XCOM), this is one title that could definitely be reimagined.

A Starship Troopers game made in Melbourne by Blue Tongue Entertainment – the same team responsible for AFL Finals Fever, Jurassic Park: Operation Genesis and de Blob, Terran Ascendancy was basically a light strategy tactics game where you took an infantry platoon through the start to the end of the Bug War.

It’s inspired by the movie and the book, and runs over three acts, with the player controlling different specialist troops over the course of the campaign. It functionally fits quite well with MicroProse’s modern mission of focusing on strategy and wargames – it’s a tactics game at its core, after all – and there’s going to be a resurgence of interest, especially with publisher Slitherine releasing a Starship Troopers game of their own soon.

Starship Troopers Is Being Turned Into An RTS

Starship Troopers is re-entering your life as a real-time strategy game in 2020 in case it was what's missing in your life.

Not the flashiest kart racing game of its time – it wasn’t as colourful or fun as Manic Karts, which released in the same year – but there was something about kart racing that I always loved. Maybe it was the fact that a go-kart could make 40km/h feel like Mach 1? Either way, you could do a ton with “fake” real environments today, and the technology available for racing games has come an exceptionally long way.

MicroProse would probably want to partner with another developer who has their own tech for this, since a straight remaster wouldn’t make a ton of sense. But there could be a neat opportunity in taking the idea and doing something new with it. The new MicroProse CEO also told GamesIndustry that the publisher was looking at racing titles. That probably wouldn’t include Grand Prix Manager, since Codemasters has the license from F1 for that, but it could mean games like Spirit of Speed 1937.

The former MicroProse founder and now-consultant Bill Stealey mentioned that the new company was making a co-op VR remake of B-17 Flying Fortress. So if you’re targeting the VR market, and coming from the approach of hitting that nostalgic ’90s gamer who enjoyed military sims, then M1 Tank Platoon 2 has to be high on the list.

There’s more interest in these kinds of sims today, thanks to the success of games like ArmA 3 and the more recent tank sim Steel Beasts. Simply remastering MTP2 could be one option, but turning the title into a co-op VR adventure would certainly find plenty of fans on SteamVR/the Oculus store/Viveport.

A turn-based merchant and political sim also sold as The Merchant Prince, this was always one of my favourite abandonware games from back in the day. You started out with a small fleet of ships ferrying wheat, wine and cotton from Venice to other friendly cities, currying favour with the Pope and various doges along the way. As you travelled, you’d run into brigands, bribe politicians for political favours so you could expand your empire and pay the lords of various cities so you could open up new trade routes. As turns passed, your senators and cardinals could die, damaging your income, or rivals could rise in the political ranks, promoting their vassals or demoting you from lucrative positions, denying you access to the Venetian army or crucial funds.

It was a classic MicroProse turn-based strategy game, but scaled down from the grand ambitions of Civilization and Colonization. It also wasn’t one of the games transferred to Atari from what I can see, so there’s always the possibility that this is one of the IPs that MicroProse still owns the rights to.

A big challenge with the revival of MicroProse is that the publisher sold the rights to a lot of its classic games back when it was acquired by Hasbro in 1998, and then Infogrames in 2001. That means it’s unlikely that Civilization 2, for instance, would get a touch-up for modern systems the way, say, Diablo 1 did. MicroProse just don’t own the rights, and licensing issues around games like Grand Prix 2 makes it hard for those titles to return too.

But the company reportedly has plans to bring back “a lot of nostalgic titles”, with plans to be announced later this year.

“I think the average gamer today is 34 years-old, and a lot of them probably have some recollection of MicroProse or their dads playing those games,” David Lagettie told Gamesindustry. “The games we’re producing will appeal to a lot of different people — not just the people that remember MicroProse.”

So the question is: what would you want MicroProse to bring back?