The TurboGrafx Mini Is Awesome (If You Love Shooters)

I forgive you if you didn’t even notice that the TurboGrafx-16 Mini was officially released last week. Who could know? I don’t see so much as a press release in my inbox about it. The extent of the marketing for it seems to be Konami’s official Twitter account sporadically retweeting people who bought one. But yes, TurboGrafx-16 Mini is finally available, and it’s excellent—depending on how much you love the shooter-heavy lineup, that is.

Konami originally planned to ship the $US100 ($150) TurboGrafx-16 Mini on March 19. And, technically, it did, since the Amazon-exclusive device was available on Amazon Japan alongside the Japanese version, the PC Engine Mini. Its official release on Amazon’s U.S. site was delayed due to the pandemic, but it officially came in stock on May 22.

Is it too late? At this point, it’s clear that the mini-console craze peaked with 2017’s release of the Super Nintendo Classic. No tiny throwback since then has had nearly as much success in the marketplace, and the novelty has largely worn off. We’ve also seen the badly-executed PlayStation Classic show that not all of these consoles are going to be great.

Fortunately, the TurboGrafx-16 Mini falls into the “great” category. Developed by the emulation experts at M2 (makers of the fantastic Genesis Mini), the TurboGrafx-16 Mini’s interface and game quality are top-notch. It’s charming, user-friendly, and fun, whether you plan to go deep into a single game or just play around with the 50-ish different options.

Wait, “50-ish”? Yeah. See, the TurboGrafx is quite a bit different than the miniaturized Super NES and Genesis. Those have different regional versions, each of which has a different game lineup installed. While there are three physical variations of the TurboGrafx Mini line (Japan gets the PC Engine while Europe gets the CoreGrafx), the software lineup on each is nearly identical. When you boot up the TurboGrafx, you’ll get a menu with 25 different American game releases. But click on the “PC Engine” icon in the lower right and the menu will transform into a PC Engine-themed one, with different menu music and a lineup of Japanese games.

The reason I say “50-ish” is that some of these games are just the Japanese versions of games that are already on the American side. And while it’s obviously a cool bonus that you can play, say, Dungeon Explorer in the original Japanese, I wouldn’t count them as two games. So while it touts a 57-game lineup, subtract the 5 dupes and you get 52 unique games, compared to SNES Classic’s 21 and Genesis Mini’s 42.

And what games would those be? Here’s the list of games on the TurboGrafx menu: 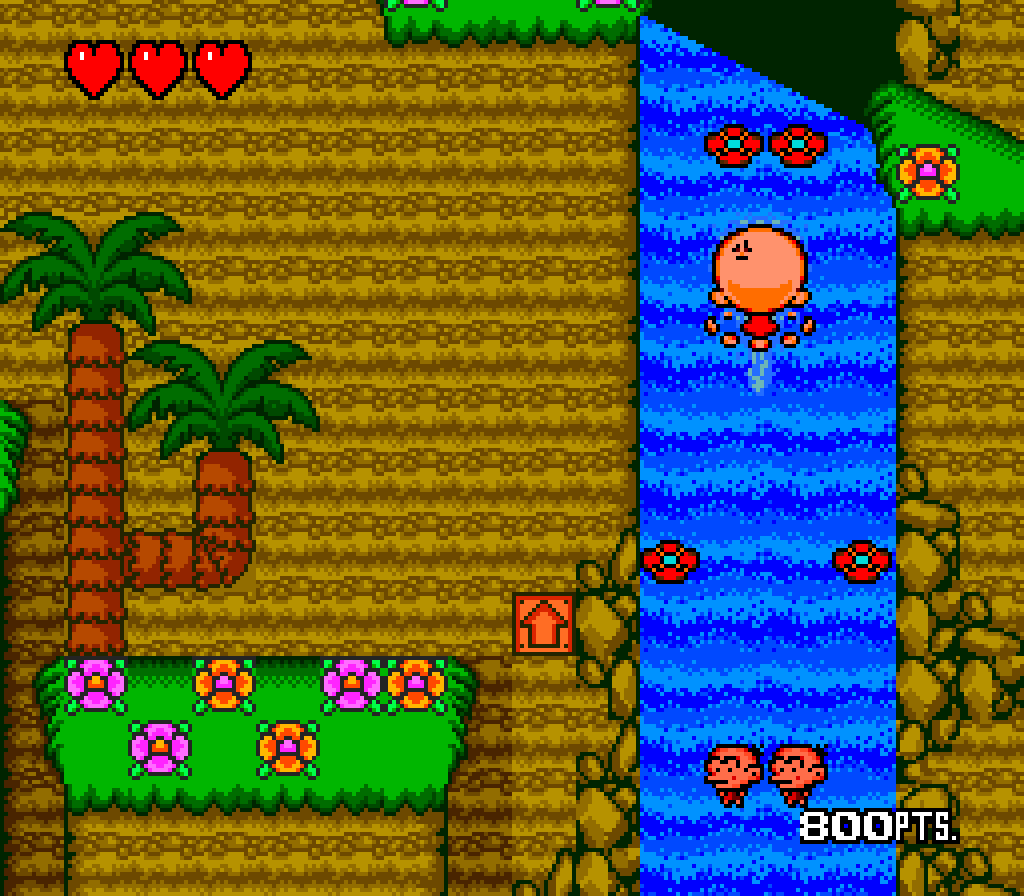 VGMuseum)” loading=”lazy” > The U.S. version of Bonk’s Revenge (pictured) is on the Mini, but the original game is only available in its Japanese form, PC Genjin. (Screenshot: Konami, VGMuseum)

And the PC Engine ones:

Besides not restricting itself to games from any one region, the TurboGrafx-16 Mini’s lineup also pulls in games from several different upgrades to the original hardware. In addition to standard cartridge games, you’ve got games from the CD-ROM, Super CD-ROM, Arcade Card, and even the SuperGrafx system. It’s as if the Genesis Mini also included Sega CD and 32X games.

OK, so there are a lot of games. Is the lineup good? It depends on what you’re looking for, I guess. Let’s say you’re looking for shoot-em-ups. Well boy howdy are you covered here because I count a full 22 of them in that list. That’s close to half the lineup, many of them considered to be outstanding entries in their genre. 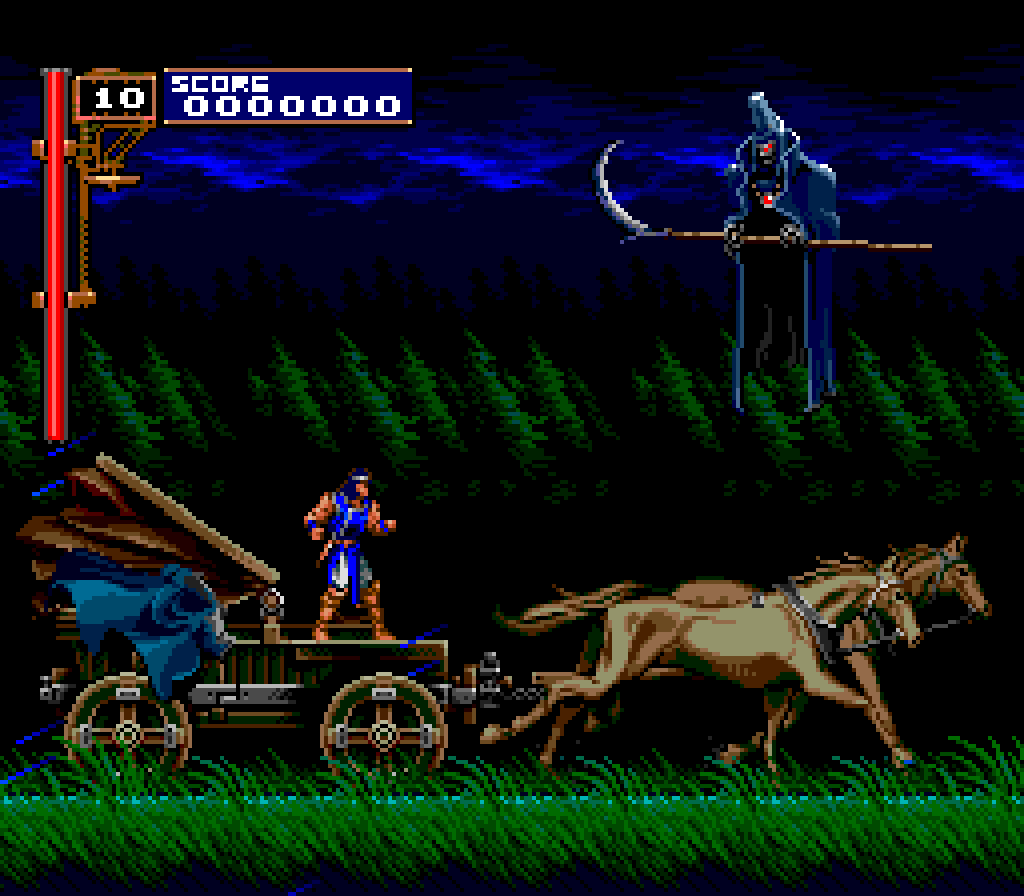 Not so much a fan of shmups? Then you’ll likely find your genre of choice to be a bit less represented than you might have hoped. I enjoy platform action games, for example. Now, the great thing about the TurboGrafx is that it includes the best traditional Castlevania game in the series, the stunning Rondo of Blood. You might buy this as a Rondo of Blood machine and I would not blame you.

But past that? The version of Ninja Gaiden here is, if anything, a noticeable downgrade to the NES original. J.J. & Jeff is funny but not a whole lot of fun. I gave the Bonk games the old college try but I still find them a little too fussy and random. The Kung Fu is a fascinating historical artefact but its 1987 vintage hasn’t aged well. These are merely good games where the SNES and Genesis machines could boast many truly great, even timeless, ones.

This is not to say there are not excellent games. You’ve got two Bombermans, and the machine even supports an optional four-player adaptor for these. I love Alien Crush, the H.R. Giger-inspired pinball game. Bubble Bobble sequel Parasol Stars appears here, the first official re-release of it since 1991. But in general, outside the well-represented shmup genre, the quality’s just a little more spotty. These games’ appeal is more selective, is what I’m trying to say. But with 52 games, you’re more likely to find a 7 out of 10 that’s more like your personal 9 out of 10, if you know what I mean.

It just won’t be Power Golf, which sucks.

I’d be remiss if I didn’t discuss the presence here of Hideo Kojima’s adventure game masterpiece Snatcher—in untranslated Japanese. On the one hand, cool, it’s on here! On the other hand, what a bummer if you don’t read the language. I’m not saying that Konami should have translated it just for this machine. Or maybe I am. Konami has done enough bad things that it could maybe do one nice thing. It’s a little weird to have it here in a totally inaccessible format for the vast majority of this machine’s audience. 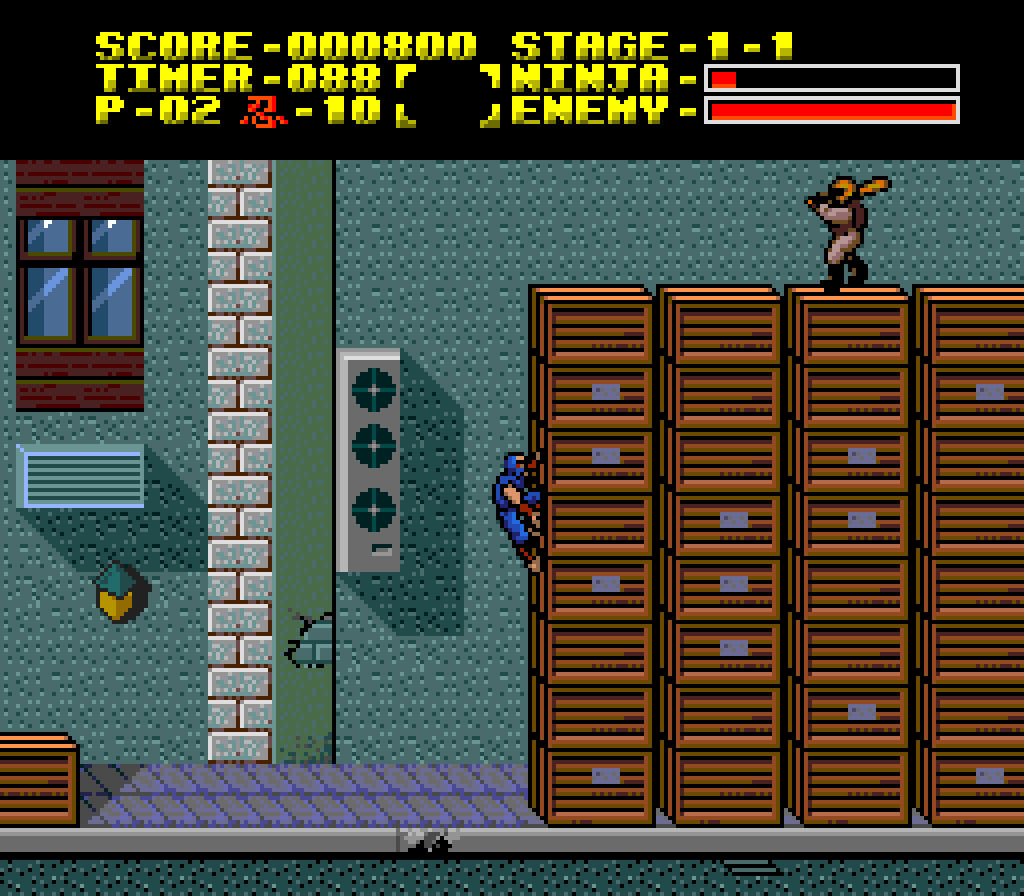 That’s not to say that M2 and Konami didn’t lavish extra special care on this project in other ways, because they clearly did. Besides the adorable presentation, with little pixel-art anthropomorphized PC Engines running around in the background, the Mini’s interface is full of little secrets. As a handy guide, here are (I think!) all of them:

At this point, I have a confession: I’m actually basing many of my impressions of the software off my experience playing the PC Engine Mini, which is what I actually imported from Amazon Japan back in March. I bought a TurboGrafx just recently, mostly to check out the actual hardware design. While I really liked the PC Engine Mini’s shell (it’s so tiny and cute!) and the controller, I wasn’t as impressed with the U.S. version. 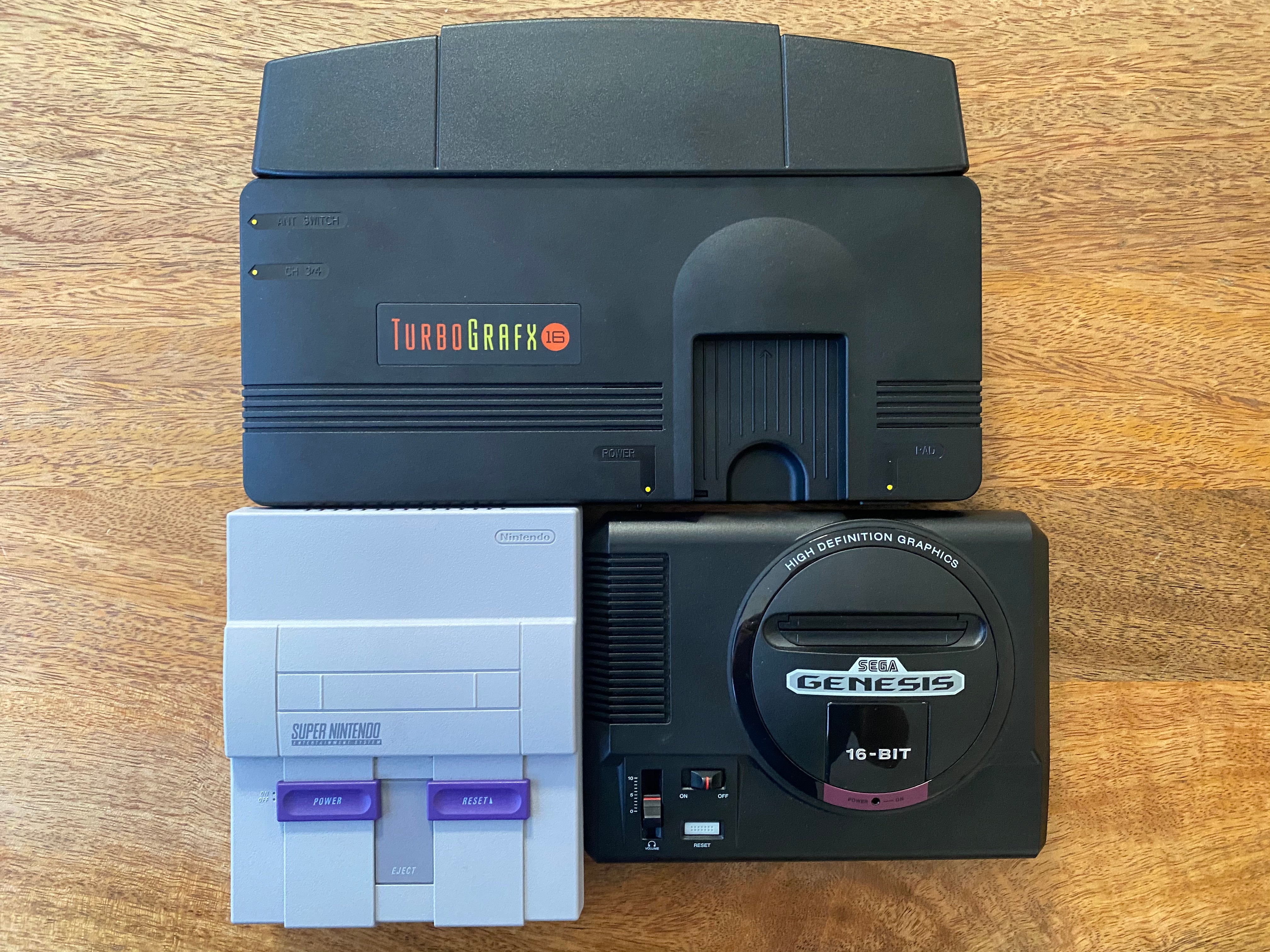 The original TurboGrafx-16 hardware was more than double the size of the PC Engine because the year was 1989 and Americans wanted everything to be bigger. The bigger it was, the more powerful it was. The PC Engine was a model of 1980s Japanese miniaturisation; the TurboGrafx was a big hunk of plastic with a lot of empty space inside. It even had a big plastic cap on the end that hid the system’s expansion port and made the footprint even larger.

The so-called “Mini” version replicates all this, down to the removable cap. It’s large. That in and of itself is not a problem, but the way they implemented the cap is ridiculous. The HDMI and USB power ports are behind the cap. The cap has a hole in it where the cords pass through. Not a notch, mind you, a hole. So you have to feed the wires through it before you plug them in.

And even if you just wanted to leave the cap off, the USB cable has to be pushed through a little hooked notch on the system’s underside before it can be fed into the slot. This presents two problems: One, the notch is so tight that it bites a little dent into the cable whenever it’s pushed in or pulled out. Two, the awkward placement of the slot inside a shallow recess underneath the machine means that many USB cables won’t even fit. (Fortunately, one that does is included in the package.) 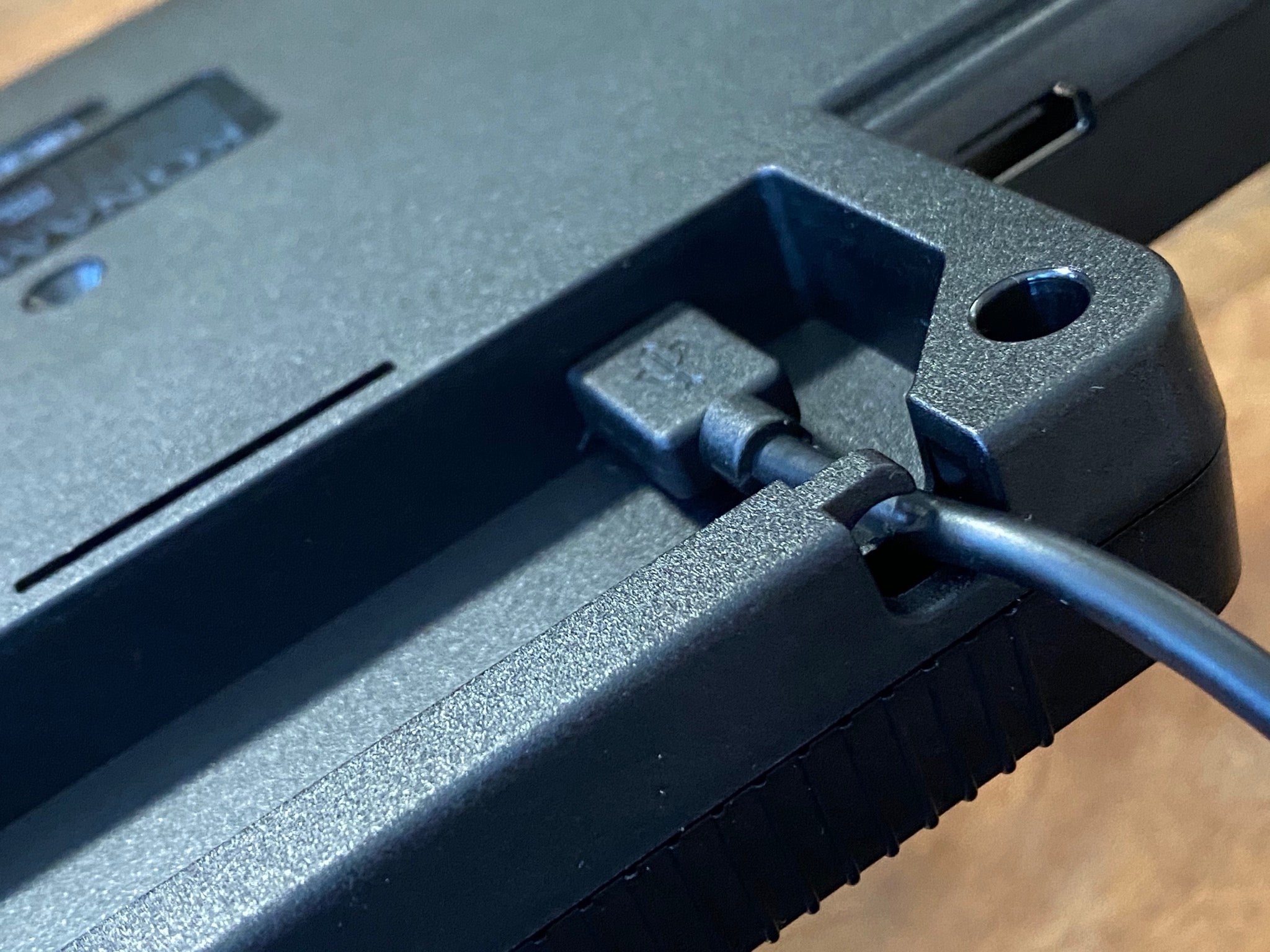 It’s really annoying to jam the USB cable in here, but at least it also gradually destroys the cable every time you do! (Photo: Chris Kohler, Kotaku)

I don’t keep my mini consoles hooked up permanently, because I don’t play them constantly. Since they all run on HDMI and USB, I just swap them in when necessary. This works for all other minis, even the PC Engine, but the TurboGrafx-16 decided it needed to be a big pain in the arse to set up and break down, for some reason.

Here’s what all this is leading up to: If you want to get a TurboGrafx-16 Mini, maybe consider getting a PC Engine Mini instead? You can create an Amazon Japan account in English, and Amazon’s global shipping is not that expensive. The PC Engine Mini’s lineup is almost the same—it loses Salamander but gains the (text-heavy) Tokimeki Memorial and Tengai Makyō II: Manji Maru, and its version of Splatterhouse is the uncensored Japanese original. You can set the system language to English. And the hardware is smaller and easier to set up and take down.

In the end, it comes down to this: If you heard the phrase “TurboGrafx-16 Mini” and thought, wow, I need that, then this will not disappoint you; it’s close enough to the Platonic ideal of a miniaturised TurboGrafx as we were likely to get. But if you’re a PC Engine agnostic who needs to be convinced that you need to dive into this library, it’s a harder sell, especially at the category-topping price of $170.

Then again, maybe Konami really did totally miss the mini-console window and this will plummet down to $30 in a month, making it an easier decision for many. Who knows! It’s the TurboGrafx-16, to which the rules do not apply.