Included in this week’s definitive edition of Xenoblade Chronicles for the Switch is Future Connected, a short playable epilogue. It ties up a dangling plotline and has a lot of fun doing it.

Future Connected is not simply more Xenoblade Chronicles, which is good. I just finished playing a couple dozen hours of Xenoblade Chronicles, and the changes developers made in the epilogue chapter separate it from the main game enough that it feels like something new. There are no complex talent trees to juggle or relationships to maintain in Future Connected. The Monado, Shulk’s magical sword, no longer predicts the future, making battles more straightforward. It’s a more streamlined and relaxed experience.

Future Connected picks up a year after the end of the main story. Piloting the airship Junks, Shulk escorts High Entia princess Melia Antiqua to her people’s Royal City of Alcamoth. As the ship approaches it’s struck by a powerful beam weapon, disabling the airship and leaving the characters stranded on the sprawling grasslands of the titan Bionis’ shoulder, an unused area from the original game. They discover that Melia’s people have been driven from their home by a mysterious fog creature. Making matters worse, the military caste has stopped protecting the city’s common folk due to the latter’s continued dealings with “lesser” mechanical beings. It sounds like a serious situation, but in actuality it’s all pretty chill. Shulk and his party are free to roam about Bionis’ shoulder as they please, doing side quests, mining for crystals, and beating up critters. As with the core game, nothing really matters until they reach the location of the next story quest marker. Then there’s a quick flash of drama, and back to cheerily wandering about.

Aiding the air of fun and frivolity are the party’s other two members, young Nopon heroes Nene and Kino. Introduced in the first few minutes of the adventure, the pair is almost pure comic relief. Every time the story threatens to take a heavy turn, Nene and Kino are there to diffuse the tension. They can’t even stand still on the party status screen.

Somebody help them. (Gif: Nintendo, Kotaku)

Nene and Kino aren’t the only Nopon joining the party for Future Connected. As the party explores the new land they encounter a series of 12 Ponspectors, each with their own special quest. When their quest is completed they start tagging along with the party, providing backup during battle with special support and attack skills. Imagine the game’s already cluttered combat interface with 12 silly little Nopon waddling about, spamming special attacks. Or just look at this screenshot. It’s wonderful chaos. 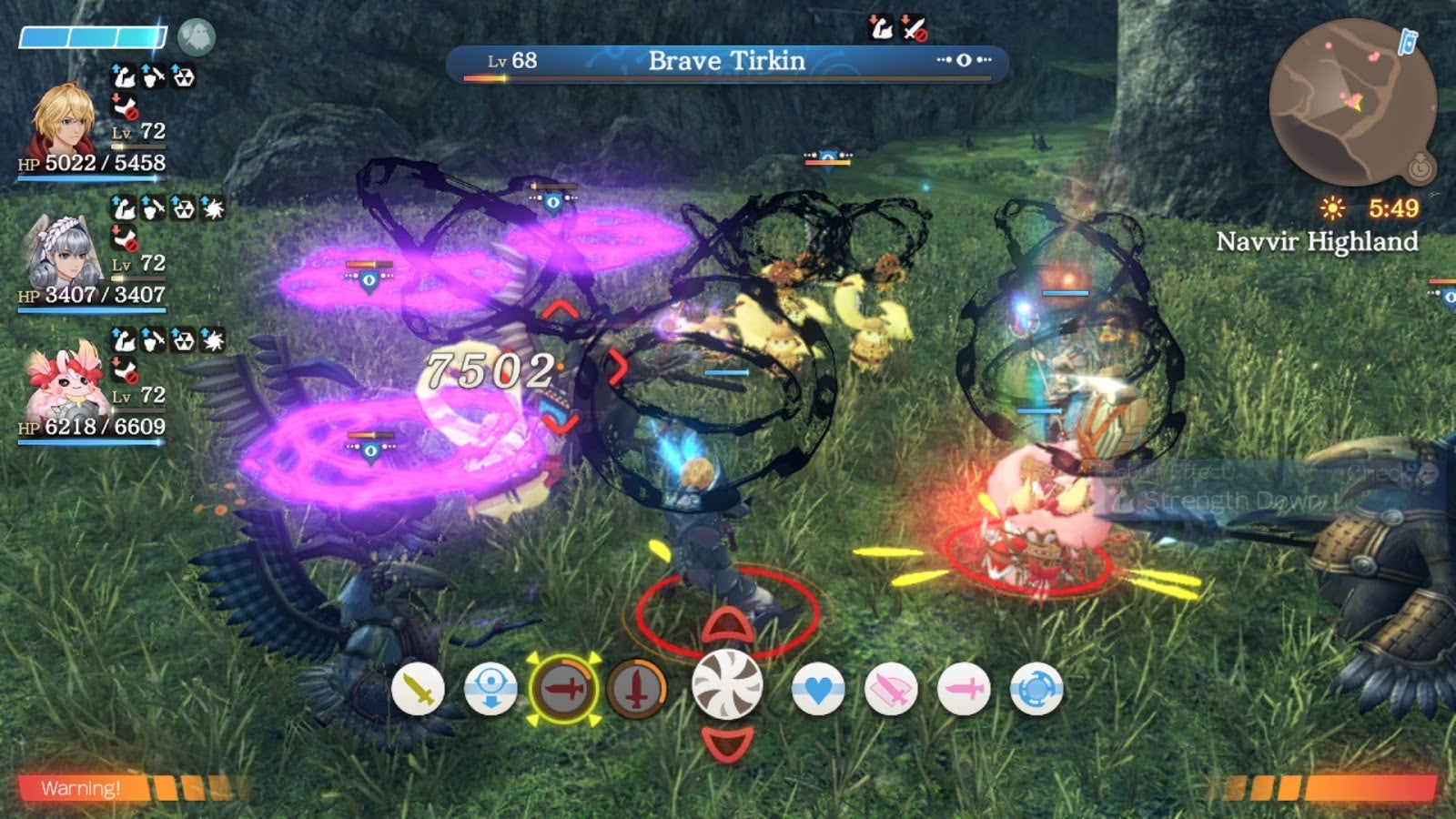 These Ponspectors also serve up special attacks. The group attacks of the original game are replaced with Ponspector Union Strikes. Spending three bars of the Party Gauge allows players to choose one of three different types of Union Strikes. A Red Comet strike deals massive damage to all enemies. The Blue Caress heals, grants health regeneration, and provides immunity to debuffs. Yellow Chaos dazes all enemies and lowers their strength. These attacks and buffs are incredibly powerful. They are also a great deal of fun to watch. 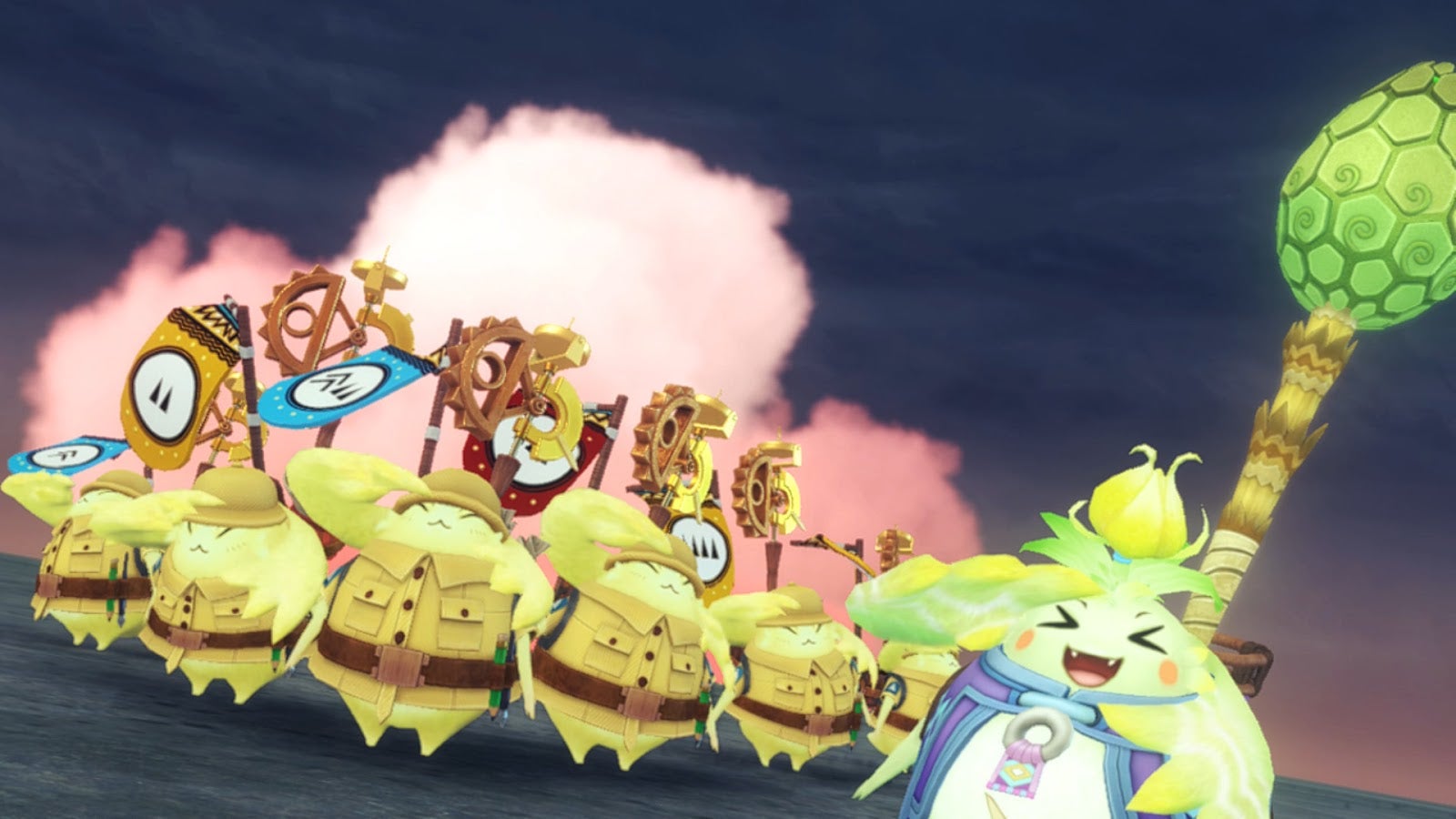 With such silliness being a major game mechanic, it’s no wonder Future Connected feels like a light and airy follow-up to Xenoblade Chronicles. With the deadly danger of the main game no longer hovering over Shulk and friends, it’s time to have a little bit of fun. The fog creature and issues with Melia’s people never really feel like dire situations, and that’s great. A more laid back adventure is exactly what I needed.

The only disappointing aspect of Future Connected is its brevity. From start to finish, collecting all 12 of the Ponspectors along the way and participating in a handful of sidequests, the whole thing was over in under six hours. I could probably stretch it out to ten if I went back to fulfil every NPC request, max out character abilities, and collect all the cosmetic equipment, AKA my weekend plans.

Future Connected is supposed to give players a glimpse at the future of the Xenoblade series. I’m hoping that means more fun and frivolity in the free-roaming RPG adventures to come.