Back in my day all we needed was 1,080 pees and a ship to sail them by. Today’s gamesters and game watchers have eyes that are, at the very least, four times better than mine. A single K, with its 2,073,600 pixels, is simply not enough. Their sight organs need at least four Ks, more than eight million pixels, in order to enjoy gaming correctly. That’s why Avermedia, the video capture company that’s not Elgato, made the Live Gamer Bolt, a $749 external capture box with the ability to capture 4K HDR video at 60 frames-per-second.

Pretty impressive, unless you don’t have a 4K screen, in which case it’s still impressive but with less Ks. For those of you with fewer than four Ks, know that the Live Gamer Bolt can also capture regular 1920 by 1080 video at a blazing-fast 240 frames-per-second. Want to see a video of that? Too bad, I don’t have anything running at 240 FPS available to capture.

Like other Avermedia devices I’ve reviewed in the past, the Live Gamer Bolt is ridiculously easy to set up. Plug your game console or HDMI switch box into the video in, run a cable from the video out to your television or monitor, and the Thunderbolt 3 cable plugs into your computer’s Thunderbolt 3 port. The Thunderbolt port is a requirement; it’s the only external port fast enough to handle that big and fast video data. Along with the Thunderbolt port, your PC needs to have at least a Nvidia Geforce RTX 1060 or AMD RX 5700 to capture 4K60 or 1080p240 video. Once connected, you’re ready to capture video while the box sends 4K60 (HDR where applicable) video to your display device of choice.

If the hardware fits, capturing is as easy as pressing a button. The big one in the RECentral 4 screenshot below marked “REC”. That’s the one. The button with the camera below it takes screenshots. You might need to tweak the default recording profile to suit your needs, but otherwise it’s point and shoot. 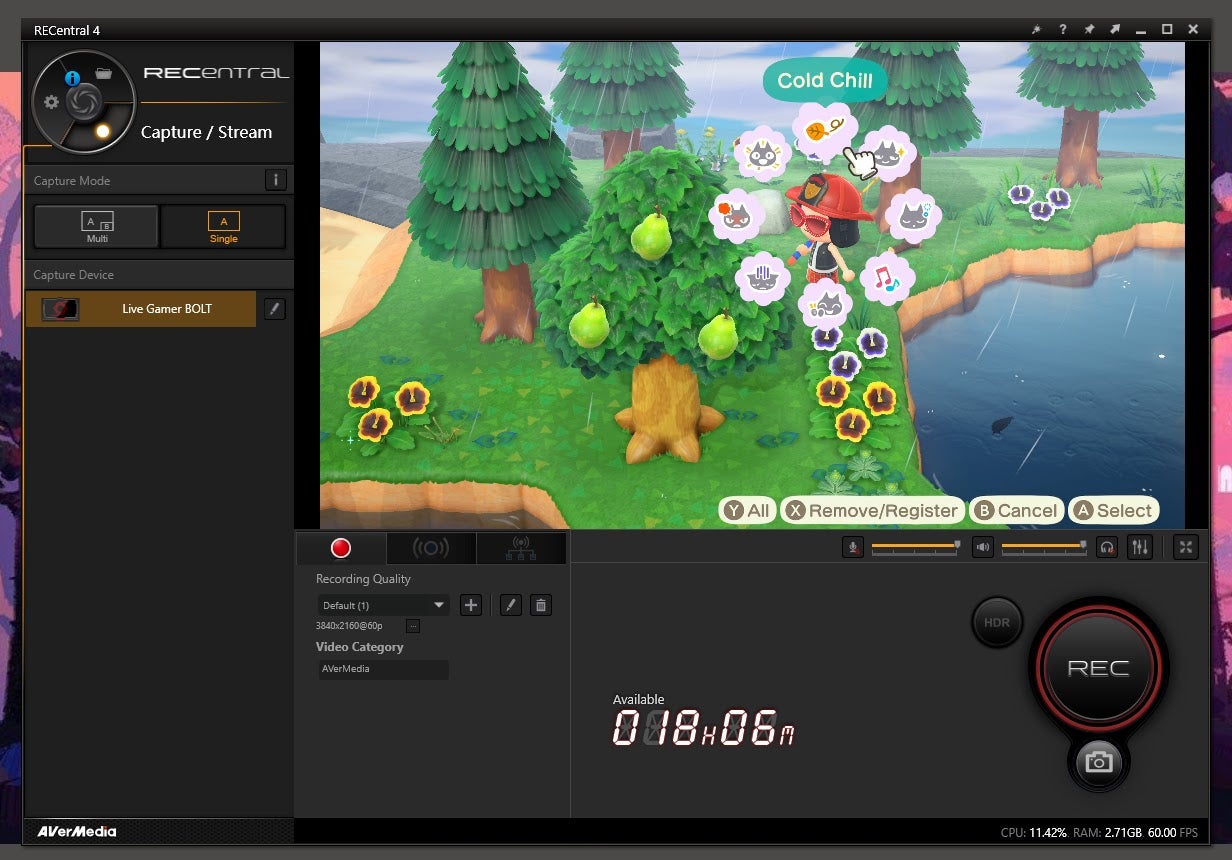 Live Gamer Bolt users can also stream directly from the application, or use it as a device in OBS or other streaming programs. I’ve been using mine as a video source during weekly Kotaku team meetings, broadcasting my Animal Crossing villager instead of my live face.

The only real question is if you need 4K60 or 1080p240 capture. Here at Kotaku we still aim for 1080p60 for our gameplay videos. It’s a good size, it gets the idea across, and it’s a bit faster to work with. I don’t need 4K recording for my Switch, but between my Xbox One, PlayStation Pro, and the upcoming Xbox Series X and PlayStation 5, it might be time to start looking towards an upgrade. Plus it makes grabbing 4K screenshots so easy, and they look great in hardware reviews. Behold the glory of 4K screenshots, if you dare. (Screenshot: Netherrealm Studios)

Sooner or later, we’re all going to be watching 4K video, even if we can’t all tell the difference from a couple feet away. When that time comes, the Live Gamer Bolt will be ready. It’s ready now, of course. I was just trying to end on a dramatic note. Well, damn.