Risk Of Rain 2 Brings An Excellent Roguelike To 3D

risk of rain 2
To sign up for our daily newsletter covering the latest news, features and reviews, head HERE. For a running feed of all our stories, follow us on Twitter HERE. Or you can bookmark the Kotaku Australia homepage to visit whenever you need a news fix.

This story has been retimed following Risk of Rain 2’s release from Early Access today.

As in the first game, you choose from a handful of characters with different sets of abilities. The first available character, the Commando, has a dodge roll and a variety of ammo types. Other characters, who can be found in the world or unlocked by completing certain tasks, can freeze enemies, lay down turrets, teleport, or wield swords.

Most of a character’s abilities are on cooldowns. You have to manage them carefully to take on the hordes of monsters that spawn as you spend more time in a level, as the game’s difficulty increases over time.

Each level has a teleporter you need to find to progress; activating the teleporter spawns a boss. Later levels felt like a moshpit of floating fireballs, laser-shooting giants, and deadly flying jellyfish.

As you explore, you collect money from canisters or by killing enemies. Money is used to purchase items, which radically alter your run. Some give you healing; others a higher critical hit chance.

Some cause enemies to explode on death; others chain fire or lightning between them. The right combo can make you an unstoppable monster-killing machine. Over the weekend, a quick dip into the game before I did some chores turned into an hour long epic when I found nothing but healing items.

Combined with a walloping three drones that also healed me, my items made me unstoppable until a massive horde of enemies overwhelmed me once the game’s difficulty cranked up to a level ominously called “I see you.”

Risk of Rain translates well to 3D, for the most part. Pixelated monsters that were kind of adorable in the 2D version are terrifying when their hulking forms materialise beside you in 3D.

Items you find attach to your character, and it’s fun to see yourself studded with ukuleles, spectral knife arms, and floating guns. The worlds themselves have more presence than they did in 2D.

An ice level feels barren and vast; a fire level, covered in jagged floating islands and bridge-sized chains, is oppressive and threatening. 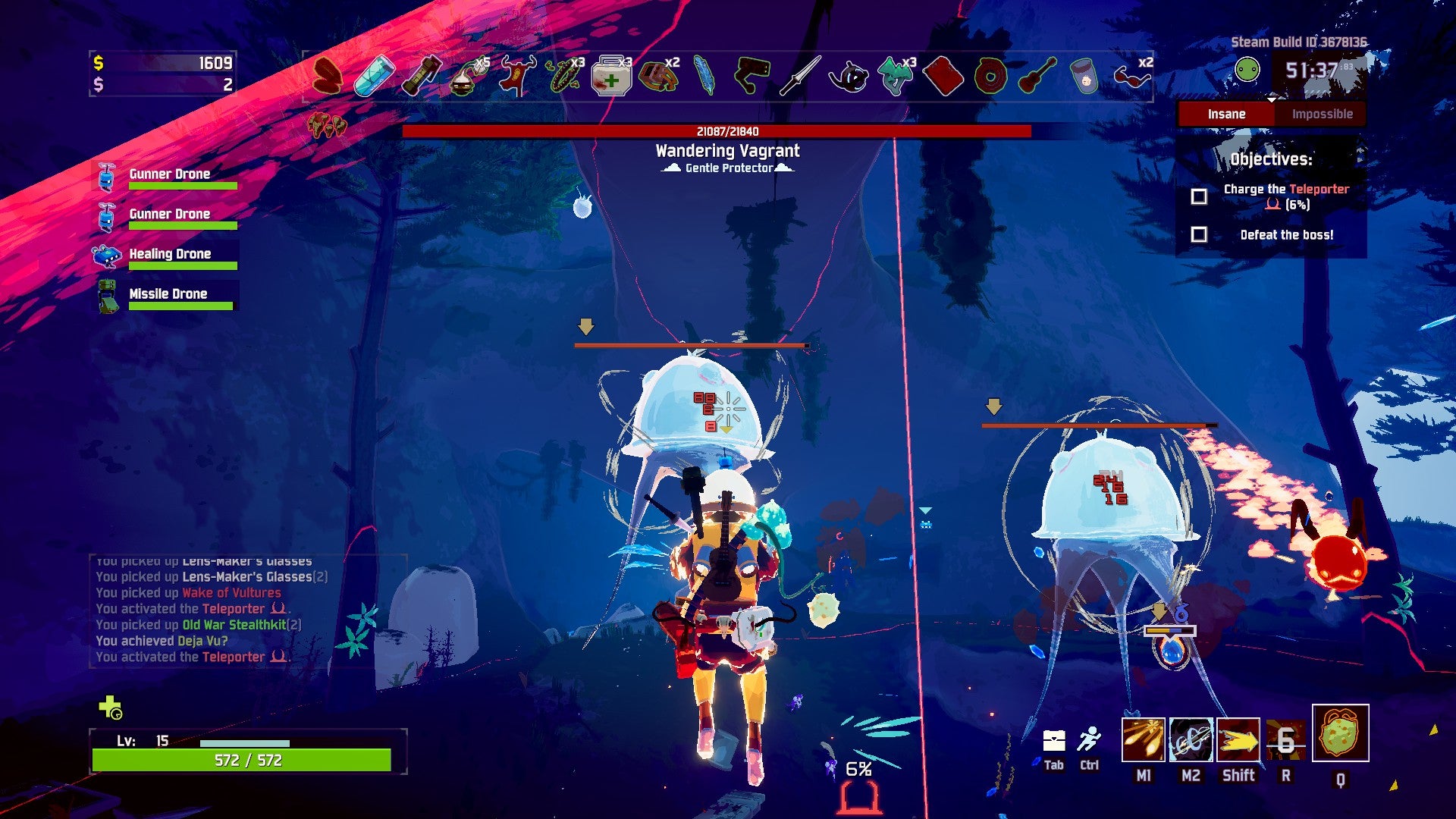 My character covered in gear

The level layouts aren’t as visually distinct from each other as they were in 2D. Layouts feel repetitive, with little variation from run to run. The landscape itself can be difficult to parse, especially when you’re looking for the teleporter, a flat circle with two claw-like pillars rising out of it.

It was easy to spot in 2D once you came across it but can be maddening to find in 3D. In a few games, I realised I had passed and missed the teleporter multiple times because it blended into the landscape.

Since the game’s difficulty increases over time, 10 minutes spent backtracking has a high penalty that can make things frustrating.

The developer says it’s working on making the teleporter easier to see, so things that frustrate me during early access may change. 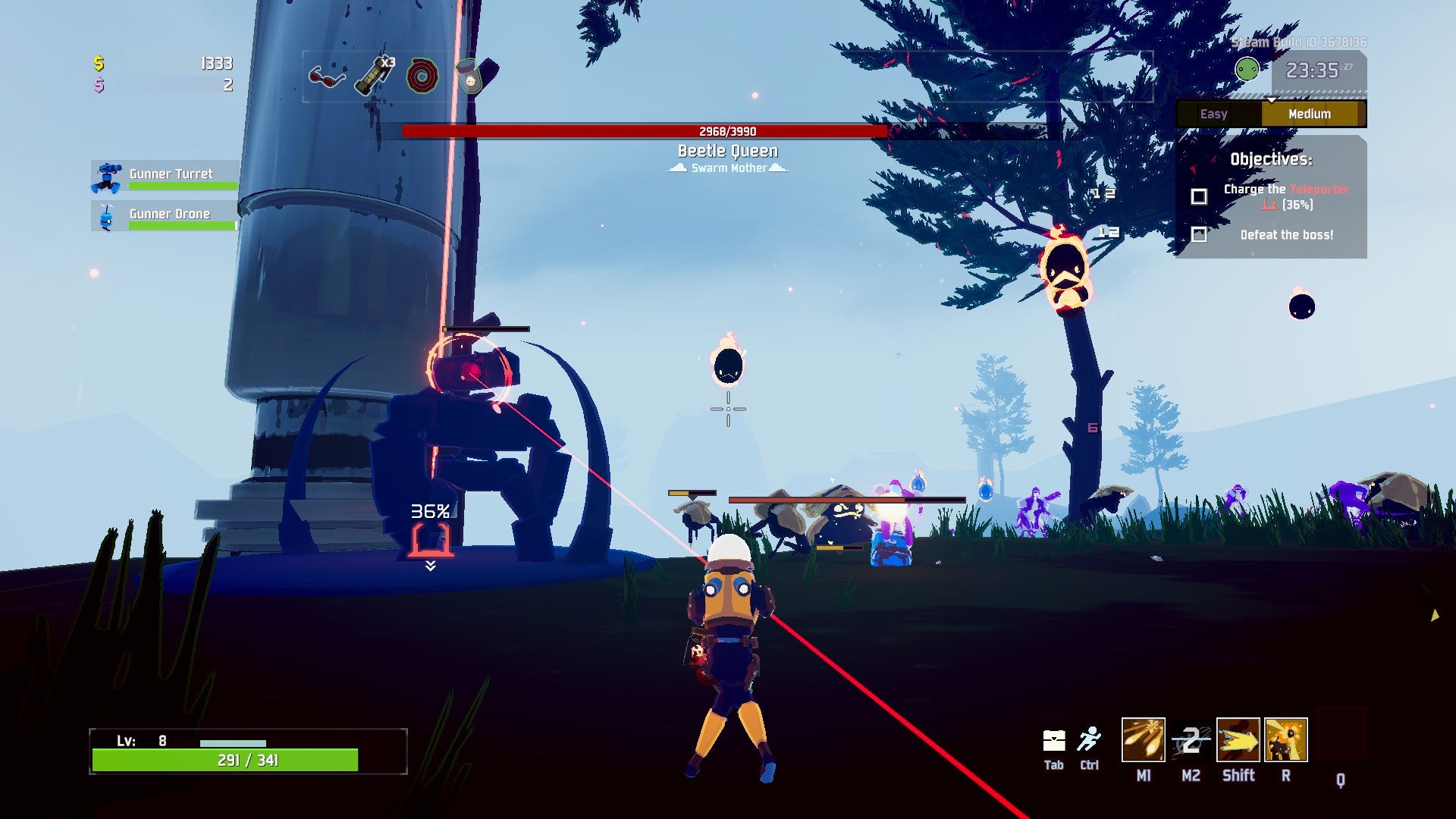 An enemy helpfully highlighting where the teleporter is

Now, it won’t fully charge and let you leave the level unless you’re within a certain radius. This design choice encouraged me to fight bosses where they spawned instead of applying my tactic in the first game of leading them to more strategic spots on the map, which made boss fights feel a little more dynamic.

Overall, though, Risk of Rain 2 felt to me like more or less the same game with a new look.

I have no problem with this. Risk of Rain is one of my favourite games to be terrible at, and it’s just as fun to try and fail in 3D as it is in 2D.

I spent the weekend hopping between Risk of Rain 2 on my PC and Risk of Rain on my Switch, equally delighted and frustrated by both.

I’ve yet to check out multiplayer or the daily challenges, but I look forward to doing so. As the game’s early access period continues, I’m hopeful the levels will get more distinct and we’ll see even more items and characters.