Fallout 76’s latest free expansion brings the series’ fan-favourite fascists back to Appalachia with a new mini-campaign that made me briefly forget I was playing an MMO.

Steel Dawn, which came out a week ahead of schedule after a patch accidentally went out early on Xbox, adds new building areas called Shelters, some more cosmetics for customising characters (backpacks!), and fundamentally changes the base game by getting rid of the thirst and hunger systems. You now get bonuses for staying well nourished, as opposed to being penalised for not eating and drinking constantly. This change further erodes any claim Fallout 76 still has to being a survival game, but makes it much more welcoming in the process. 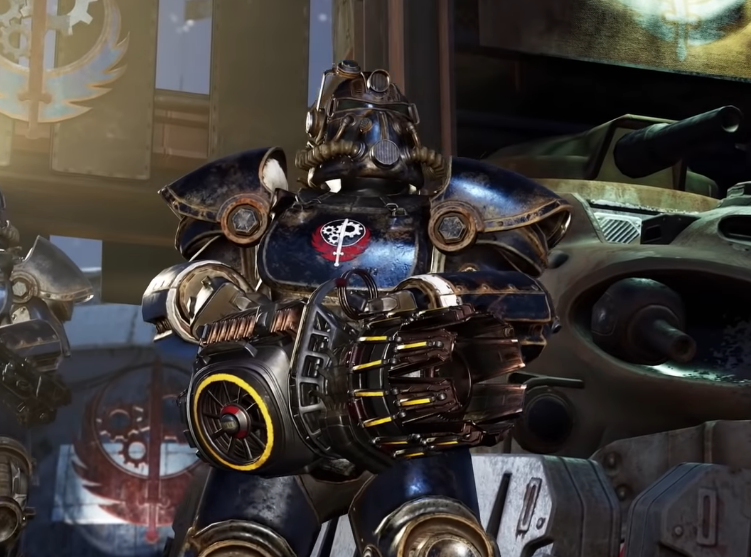 But the expansion’s biggest draw is a new settlement led by the Brotherhood of Steel and an accompanying questline that sees you navigate opposing factions and conflicting agendas to try and craft a version of the militaristic law-and-order cult unique to West Virginia’s wasteland. The Brotherhood of Steel has been in Fallout since the beginning, offering an alternative to the chaotic raider groups that began prowling the country after the bombs fell, as well as protection against the Super Mutant hordes terrorizing burgeoning civilian outposts. I initially hated Scribe Valdez until I learned more about her personal history by snooping through her log entries. (Screenshot: Bethesda / Kotaku)

Part religious order, part militia, the group turned hierarchical rule following into an ideology to stave off nihilism. In Fallout 76’s version you get to play a part in establishing how a new faction within the Brotherhood will learn to balance its fanaticism with the realities of post-apocalyptic community organising.

Steel Dawn’s first questline isn’t one of the best Brotherhood stories by any stretch, but it’s decent, fresh, and set to be followed by a second chapter sometime next year that I hope makes good on some of the choices I got to make in the first half. Leader Paladin Leila Rahmani and her lieutenants, Knight Daniel Shin and Scribe Odessa Valdez, are on an expedition to re-establish a foothold in Appalachia and salvage old technology that can be used to increase the organisation’s power and control. There’s sociopathic robots, double-crosses, and a Super Mutant shootout. Despite the constant ping-ponging across the map, I had fun. I’ve completed the main quest, which ran just over three hours, and it’s one of the few in the game that I actually wanted to keep coming back to, rather than merely finishing out of a sense of duty and the desire to earn some extra caps. Rahmani, Shin, and Valdez are well-rounded characters with distinct points of view that help depict the Brotherhood of Steel in a more multi-dimensional way. They’re not solely the holier-than-thou, jackbooted thugs of the original games, or the problematic protectors of the newer ones, instead occupying a more malleable grey area, at least for the time being.

Players have been waiting for the Brotherhood of Steel to return since the game launched. Its initial campaign took players to one of the organisation’s old abandoned outposts, then overrun by giant flying Scorchbeasts. This year’s The Wastelanders update finally added human non-player characters to the game to act as quest givers and ethical sounding boards, including raiders players could either kill or earn the trust of. By bringing back the Brotherhood of Steel Fallout 76 finally feels like it has a populated world and disputed moral landscape reminiscent of Bethesda’s previous series entries. The Brotherhood of Steel have set up shop in the Atlas observatory, home to strange science experiments and mysterious tech. (Screenshot: Bethesda / Kotaku)

There’s still no mistaking Fallout 76 for Fallout 3 or 4. Built at the most fundamental levels as a multiplayer game driven by scavenging, campsite crafting, and continuous scavenging, the game is still Fallout Online, and Steel Dawn doesn’t change that. It does, however, offer another small refuge from Fallout 76’s character grind and messy building system for those who just want to stroll through a good old Bethesda storyline complete with awkward face-to-face conversations and the chance to diffuse tense situations or opt for the bloodbath.

With each new update, it seems like Bethesda is moving further away from Fallout 76 being a state-of-nature survival sim and more toward making it the sort of traditional single-player Fallout a fair few players wanted. In many ways I’m sad to see the studio abandon that original vision, but it’s certainly made Fallout 76 a much easier game to enjoy.