By now, you’ve probably figured out how to stay connected to your mates when everyone’s stuck at home. You’ve set up the Discord server. You’ve figured out which games have great online multiplayer. You’ve pinpointed a weekly time that works for everyone for a large-scale Animal Crossing visit. But if you’re lucky or unlucky enough to be cooped up with others—roommates, partners, family members, extremely smart pets—there’s an easier way to find some connection: couch co-op.

This article has been updated and retimed since its original publication.

Maybe you and your live-ins love video games and are looking for fresh multiplayer options. Maybe they haven’t played video games for a while (or ever) and you’re looking for an introduction. Whatever the case, the following games are all fantastic offerings. We’re talking short levels, intuitive controls, relatively low skill barriers, and, most importantly, sky-high fun factors. These are games you can pick up, play for the span of a Seinfeld rerun, and put down without issue.

Lovers In A Dangerous Spacetime (Switch, PS4, Xbox One, PC) 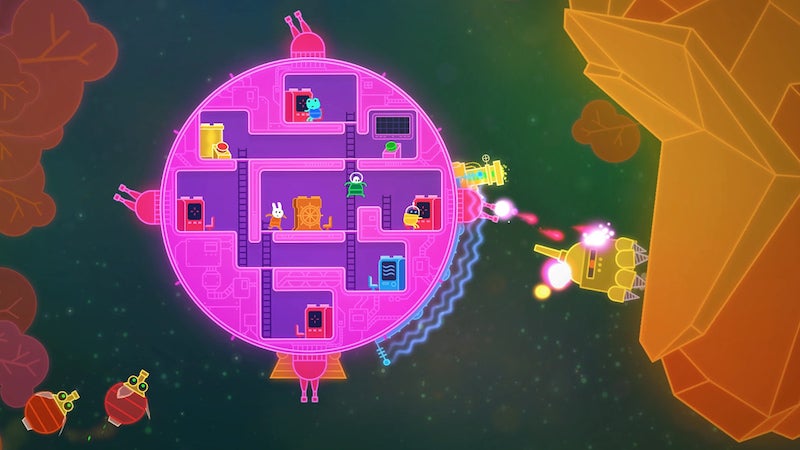 Lovers In A Dangerous Spacetime is awash in bright lights and killer music. Indeed, even the game’s title is a reference to Bruce Cockburn’s thunderous ‘80s hit “Lovers In A Dangerous Time.” Still, despite the synth-soaked soundtrack, this isn’t a music game. It’s a top-down space shooter that’s clearly inspired by the Galagas of Cockburn’s heyday. The catch, though, is that this game is thoroughly multiplayer by design. Up to four players can join a game, and each one operates a different part of the spaceship: one at the guns, one at the shields, one at the engine, one at the map. Battles are fast-paced and frenetic, and even with the total might of four people, you always feel like you escape by the skin of your teeth. For your efforts, you can be rewarded with gems that go toward upgrading your ship. You’ll also free adorable creatures from brutal space prisons, which is the whole goal of Lovers. To steal a line from Cockburn, “nothing worth having comes without some kind of fight.” 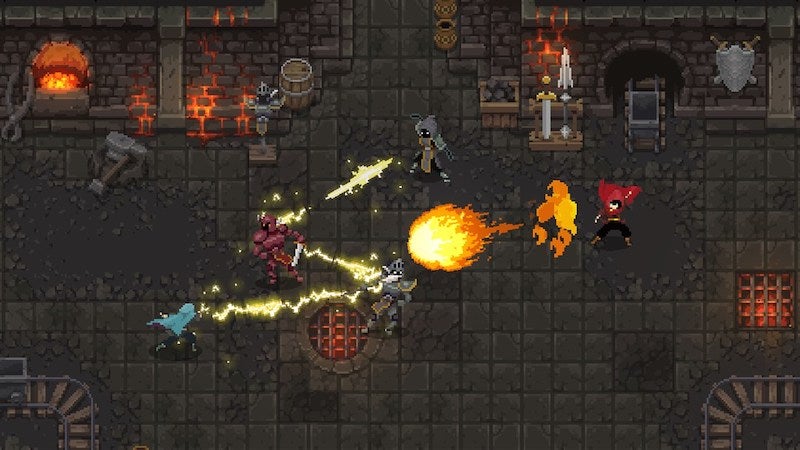 Wizard of Legend is a top-down action game in which you and another player work your way through randomised dungeons. Each round is straightforward: Go into a room. Use awesome spells to eliminate the baddies. Some runs might last three minutes; others, 30. But regardless of your run time, you’re bound to unlock a new spell—each and every one game-changing in the sense that it literally changes how you play the game. You can trap foes in a water bubble, or shoot them with homing fireballs, or smack them with some vines. All told, there are more than a hundred spells from six different elements. You and your partner can each equip four at the start, and all unlocks are shared between the two of you. While the combat is fun enough, Wizard of Legend’s true joy is in mixing and matching spells at the start of each round, all in pursuit of a lethal symbiosis that helps the two of you survive each dungeon’s six rooms. The result is a roguelike that compels you to keep playing—just one more try, one more go. There’s just one caveat: If you can’t stomach awful puns, steer clear of this one. 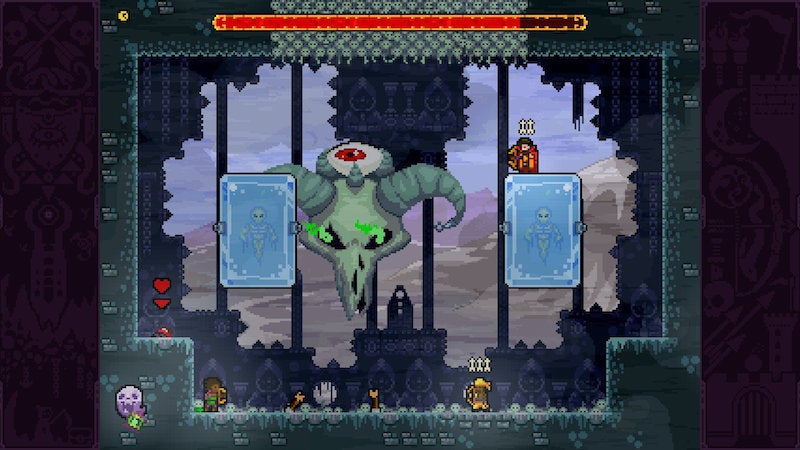 What started as an Ouya (remember that?) flagship has become one of the greatest party games around. The multiplayer mode—in which you and up to three friends enter a 2D arena and shoot arrows at each other until one person is left standing—is enough of a draw by itself. But the co-op campaign shouldn’t be forgotten. Functionally, it plays the same as the versus mode, except rather than trying to take each other out, you battle against waves of increasingly difficult enemies. Levels are quick, the controls are easy enough to learn, and completing each round requires near-reflexive communication with your fellow players. In case you think this all sounds too chummy, worry not: You can still take out your teammates with a well-placed—or rather, misplaced—arrow. 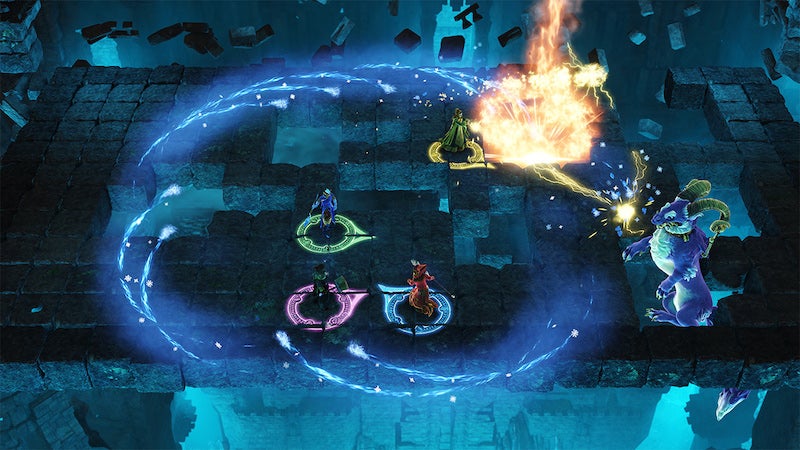 At first glance, Nine Parchments might look like your standard isometric spell-blaster. The game starts austerely: You have just two characters with three spells each. Soon enough, your options balloon to include up to 32 characters and more than three dozen spells. There are frustrations—you can’t select levels, for example, so replaying a section to snag a missed unlock means you have to start the whole game from scratch—but it’s easy to ignore them for how riotous the couch co-op can get. See, in Nine Parchments, friendly fire is a real risk. One wanton area-of-effect spell can easily wipe your fellow teammates. But there’s also a more equitable setting that splits the damage, half to the caster, half to the (presumably inadvertent) target(s). Sure, you can turn off friendly fire entirely. But where’s the fun in that? (Good thing levels generally take 10 or 15 minutes to complete.) 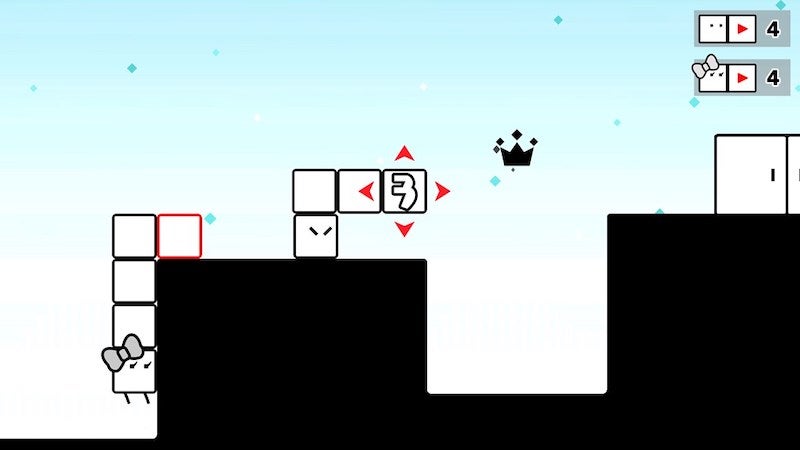 In BoxBoy games, you play as a box-shaped little fella. You can extend yourself by a certain number of box lengths to cross various chasms, with the ultimate goal of making it to the end of the level. As puzzle-platformers go, few games top the charm and brilliance here. BoxBoy! + BoxGirl! is the first cooperative game in the series—player two controls the bow-adorned BoxGirl—adding a smart wrinkle to an already smart game. The two characters play similarly but not exactly the same, and things shift from level to level. In one level, maybe BoxBoy can create four boxes while BoxGirl can make just two. In another, maybe BoxGirl has to cross a spike-filled pit first in order to press the red button on the other side. These character differences force both players to think twofold: How do you work as an individual? And how do you work as a unit? It’s hopeful evidence that you needn’t be a carbon copy of someone you’re with. 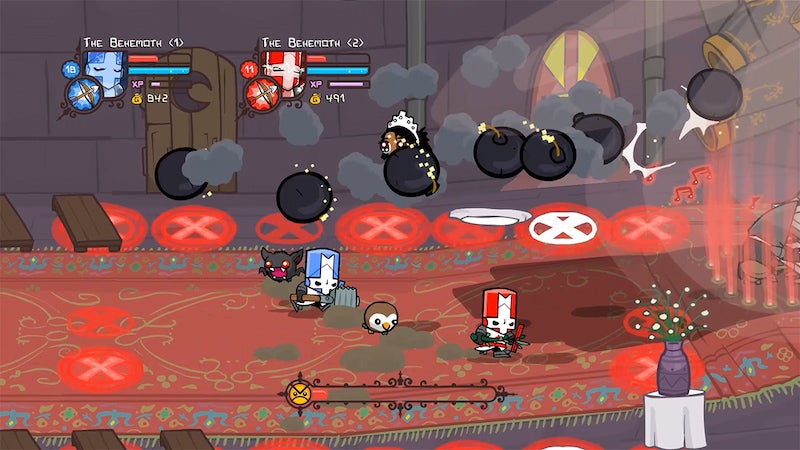 Don’t be fooled by appearances. Despite the superficial hijinks—cartoonish art, fun-house music, an all-around lack of seriousness—Castle Crashers is a deep, rewarding game. Up to four players engage in 2D beat-em-up gameplay. There are robust RPG elements, too: unlockable weapons, new characters, stat level-ups. It’s mostly co-operative, but at the end of each boss fight, all players face off in a bout. Maybe you played Castle Crashers when it first came out, all the way back in Obama’s first term. Since then, developer the Behemoth has released remastered versions for modern consoles, with performance improvements and a graphical facelift. If you missed it the first time around, worry not: The modern versions play as smoothly as any indie action game today. 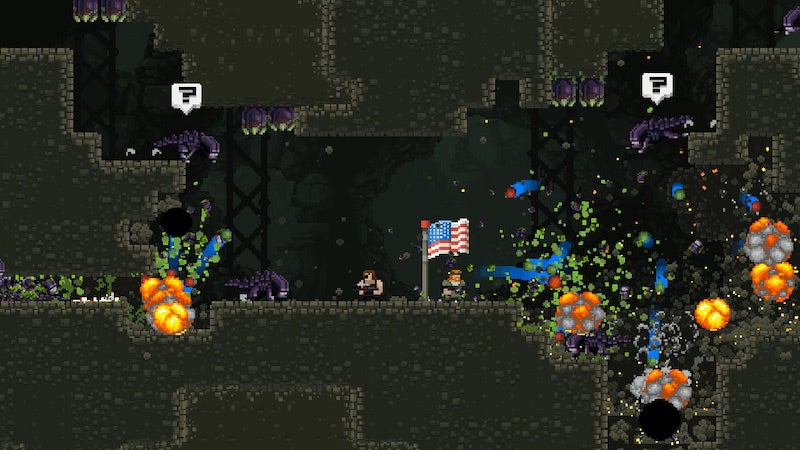 If you took a grab bag of ‘80s action films, threw them in a blender, and repurposed the result as a pixelated side-scroller, you’d get Broforce. This game is a testosterone-fuelled smoothie of tropes, with just as many big guns (mountainous biceps) as big guns (death sticks that fire bullets). The cast, too, draws from the same well of inspiration and includes satirized versions of popular action characters, including the Brominator, Bronan the Brobarian, Ellen Ripbro, Brochete, Indiana Brones, Mr. Anderbro, and Rambro. As these Bros, you and up to three other friends jump and run and gun through brief yet frenetic levels. At the end of each one, you stick to your big, ‘80s-inspired guns, hoist an American flag, hop onto a chopper, and fly off into the sunset as everything explodes.

The world is crazy right now, and the necessity of distancing means people have to rely on the internet for that social contact humans crave. Video games are a great alternative, but some are much better than others if you just want to hang out with friends.