One Of The Best WW2 Games Is Now Even Better

I reviewed Unity of Command II a couple years back and, a few quibbles aside, found it to be one of the most interesting and innovative turn-based tactics games I had ever played. It’s now back with a major expansion, and those quibbles are in the firing line.

If you’re just joining us for Unity of Command talk, it’s a turn-based game in the vein of classics like Panzer General (or its successor Panzer Corps), only with some very cool ideas on how to make things a lot more involving than simply moving units around a battlefield. 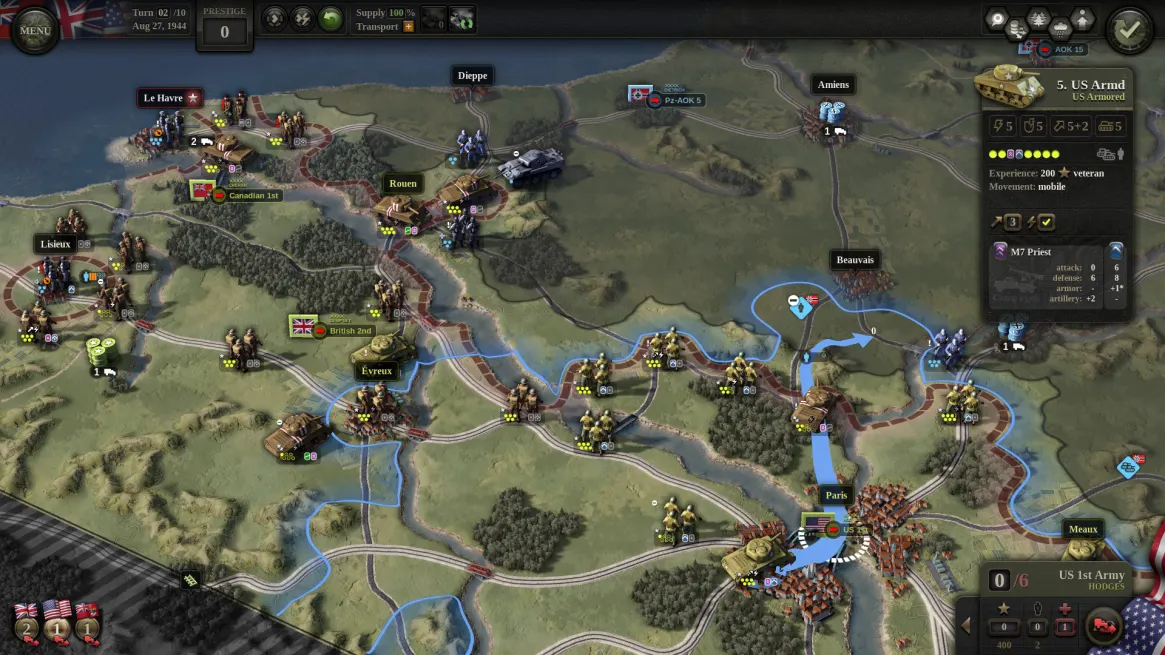 It does this by turning cover into a puzzle, forcing you to use what are essentially special powers to dislodge the enemy from cities and difficult terrain, and by building the entire experience around lines of supply, forcing you to worry as much about keeping your tanks fuelled as where the enemy is.

As great as the game was, a problem that arose for me after repeated play — repeated enough that this only really emerged for me after my review was already done — was that the balance between those puzzle-like elements and more sweeping tactical manoeuvres was a little too lopsided, something that carried through to the game’s first two expansions as well.

Trying to break a city open using suppression and flanking was a fun challenge, but it was also fairly straightforward, and thanks to the game’s mission design was taking up far too much of my time when I could have been doing stuff that was even more fun, like sending my tanks on big runs that could encircle and cut off enemy units from their supply lines, all the while juggling my own increasingly perilous logistics.

Unity of Command II’s Barbarossa expansion fixes much of that simply by virtue of its setting. Shifting its focus away from the mountains of Italy and the dense bocage of Normandy, it puts you in command of German forces during the early stages of their war against the Soviet Union, which means a lot of big moves on even bigger maps.

Here, the mix of map and mission styles is almost perfect. There are loads of enormous flanking moves and penetrating spearheads on offer as you overrun the Russian’s initial positions, and just to mix things up, these are punctuated by smaller, puzzle-like maps based specifically around sieges or difficult terrain. The very best missions, though, will combine the two, with big tank battles leading to a conclusion based around capturing cities surrounded by rivers and/or fortifications, almost like a boss battle.

Unity of Command II is at its very best when it’s really pushing its central logistical mechanic, asking you to juggle rapid armoured advances with the need to keep your units supplied, always thinking 1-2 turns ahead since moving your supply lines around always takes that long to catch up. And it’s as though this campaign, more than its previous efforts, is the setting the game was born for, as Barbarossa is focused so heavily on huge maps and precarious lines of supply, really playing to the strengths of the game’s take on this kind of tactics.

This tension can make the campaign hard — in places too hard — but in a way that I really like as well, because it lends the game a surprising amount of historical value. It’s very easy to think of the Second World War as a series of book chapters, with 1941 a year of unchecked German victory culminating in Barbarossa, whose initial breakthroughs have long been seen as a stunning success, with the Nazi’s undoing not coming until Stalingrad a year later.

That long-held view has been challenged recently, though, with the very convincing argument — one you can check out from an excellent BBC History Extra podcast with historian Jonathan Dimbleby — that Barbarossa was in fact an absolute shambles, and the German’s bumbling overreach means they had decisively lost any chance of winning the war as early as August 1941.

Barbarossa has you playing out that bumbling. While the campaign is predicated on a series of non-stop victories, the game becomes exhausting after a while, as the vast distances involved and the attrition your forces experience starts to grind down your offensive the closer you get to Moscow. Historically, this is put down to “over-extended lines of supply”, which is such an abstract and bland term as to almost mean nothing to most people reading about it 80 years later.

It means everything in this campaign, though, because you’re living through the direct effects of what that actually means. You’re always moving forwards against forces weaker than your own, your armies are continually stretched thin, always running out of fuel and ammo, your headquarters units — vital to allowing you to unlock special and necessary “powers” like assault river crossings — rarely able to catch up to the advances of your panzers.

It’s a fantastic challenge to your tactical abilities, but also a wonderful representation of the actual historical campaign, as despite the fact you keep winning, the further you go the more you realise “oh shit what have we got ourselves into here these Russians just keep coming and I’m all out of beans and I don’t know where the infantry unit to my left even is anymore”.

Which, you know, I like to think is something von Rundstedt muttered to himself at some point around Christmas 1941, so to be put in the same situation in a strategy video game is pretty cool.

The Barbarossa expansion is out now and available on Steam.