An unfinished build of what is assumed to be Windows 11 leaked online, and people are installing it. Based on early impressions, it looks like Windows users are in for a big overhaul: Screenshots show off an all-new macOS-like desktop layout, a redesigned Windows Explorer interface, new Start menus, and some of the best built-in wallpapers Windows has ever had.

Some folks are excited by the changes, others not so much, but it’s safe to say everyone’s at least curious about Microsoft’s still technically unannounced operating system (it’s assumed the upcoming Sun Valley Windows 10 update will be renamed Windows 11). That said, you probably shouldn’t install the leaked Windows 11 update.

The reasoning is the same as when we caution against installing beta builds of other operating systems and test apps like Chrome Canary: Windows 11 is unfinished and unstable. The leaked Windows 11 is also technically unofficial, so if you install it and something breaks, Microsoft won’t help you fix it — and something will probably break considering how notoriously buggy official Windows Updates are. 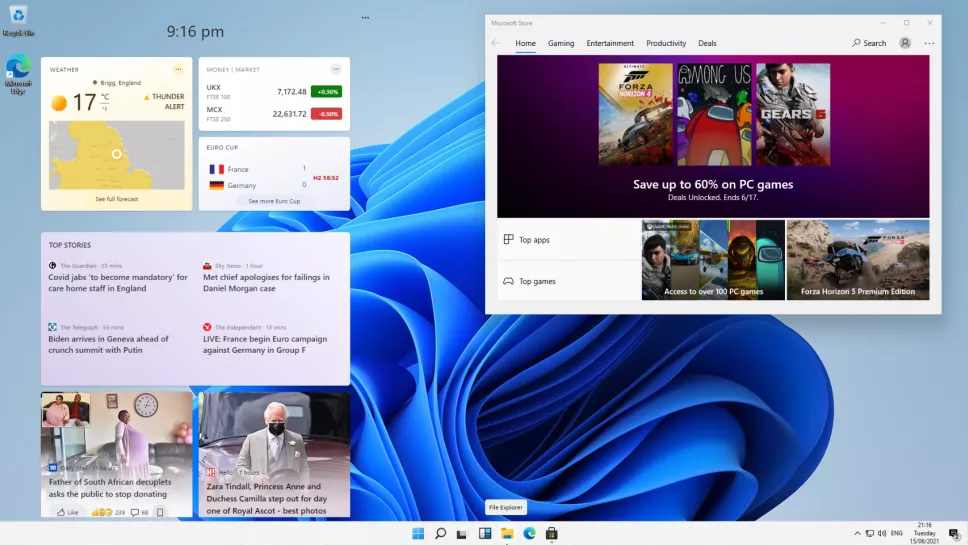 You also can’t install Windows 11 through official channels (you won’t find it on the Windows Insider Channels), meaning you’d have to download it elsewhere — and hackers and phishers love to dupe unsuspecting users with malicious links masquerading as leaked software.

I won’t deny it’s fun to try new products early, but there’s a reason Microsoft hasn’t announced Windows 11 yet, let alone released a beta version. Developers, journalists, and high-level users can probably get away with trying Windows 11, but general users should steer clear until Microsoft rolls out an official beta.

Frankly, you should probably avoid official pre-release versions, too, for many of the reasons we’ve covered, unless you have a secondary PC you can test it on and keep your primary machine securely on Windows 10.

Other Windows 10 users might feel the urge to try Windows 11 to “future-proof” their PC’s operating system — but fear not. Not only would the leaked Windows 11 be an incomplete experience compared to Windows 10, Microsoft recently confirmed it will support Windows 10 through October 14, 2025 — so even after Windows 11 launches officially, Windows 10 will continue to receive important security updates for several years.

Of course, that doesn’t factor any coercive update strategies Microsoft may push to get users onto Windows 11 even with Windows 10 still active, but in theory you will be able to safely stick with Windows 10 for a while, if you want. And for the foreseeable future, sticking with Windows 10 is exactly what you should do.