On September 20th, 2002, the movie Ballistic: Ecks vs. Sever, starring Antonio Banderas and Lucy Liu, was released in theatres. It was a box office failure and hated by critics—in fact, it is the worst reviewed film in Rotten Tomatoes history, sitting at 0% with 116 reviews. But this poorly-reviewed action film received a well-reviewed video game adaptation, a first person shooter for the Game Boy Advance that was released a year before the film.

The game actually started development before the movie had a cast or finished script. And then that game got a sequel, released the same week as the movie.

The History of Ballistic: Ecks vs. Sever (The Movie)

While Ballistic: Ecks vs. Sever was released in 2002 and feels like a direct response to popular action films like The Matrix, the film had been floating around Hollywood since 1989.

Originally the film was titled Legion and was going to star Dolph Lungren, best known for his role as Ivan Drago from Rocky IV, but this version never entered production.

The movie was to tell the tale of two former US government agents who discover a vast and complicated conspiracy that only they can stop. Stopping this conspiracy would involve firing a lot of guns.

Over the next decade, various actors were attached to the script, including Wesley Snipes, Sylvester Stallone and Jet Li. At some point after June 2001 and before the movie started filming, the script changed again. The character Sever, initially a man, became a woman played by Lucy Liu.

Filming began, aiming for a June 2002 release. It was directed by Thai writer and director Kaos and was his first American-produced film. Kaos wanted the movie to feel real and ended up using little CGI, shooting in mostly unaltered real world locations. Cinemareview has a fantastic amount of information about the production of the film and how much work went into what would ultimately be a critical and financial failure.

But on November 21, 2001, while the film was still being made, the game, which was simply titled Ecks vs. Sever, was released. 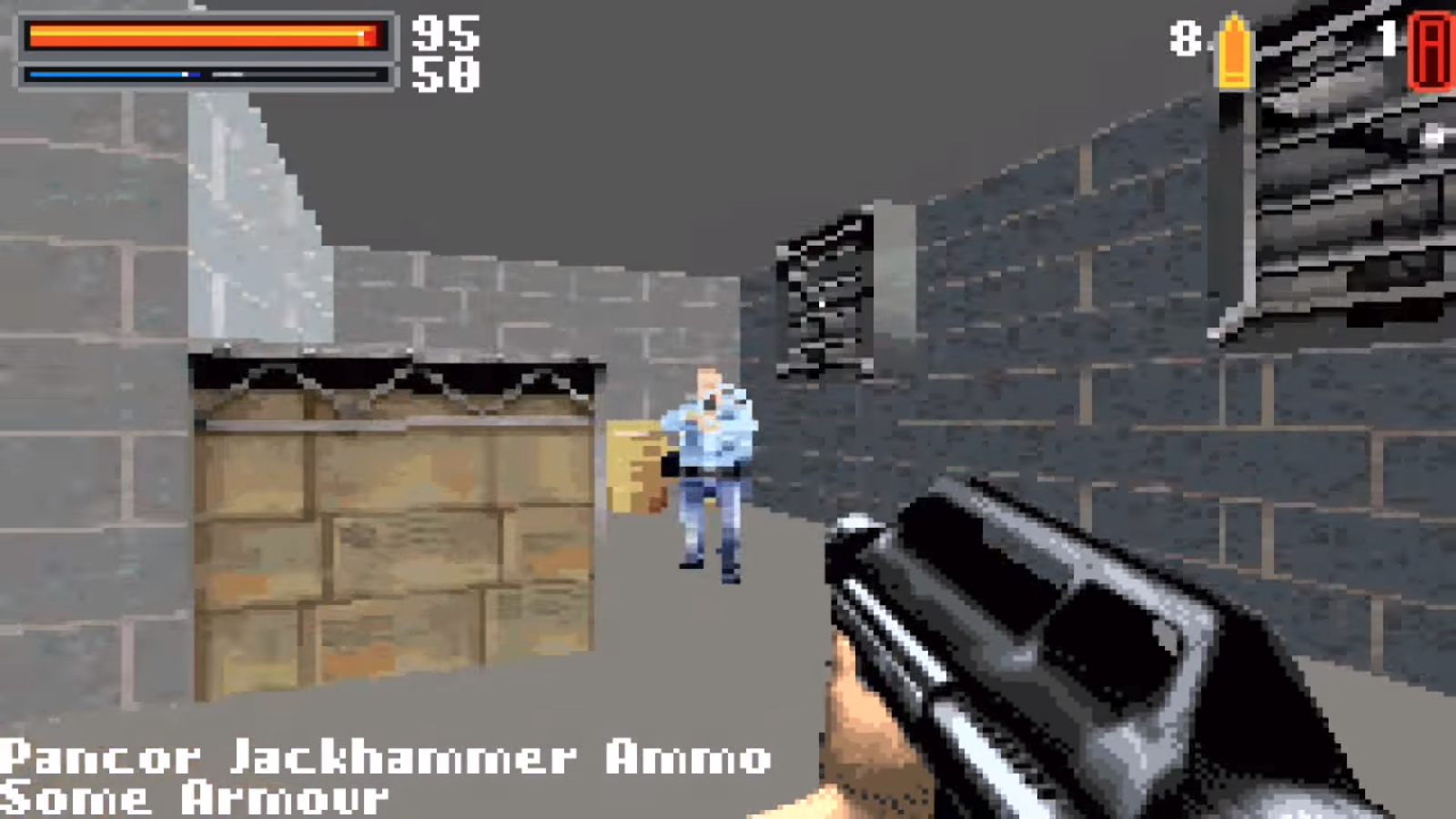 The History of Ecks vs. Sever (The Game)

Ecks vs. Sever was developed by Crawfish Interactive and published by BAM! Entertainment, which had a close relationship with Franchise Pictures, the studio behind the Ballistic: Ecks vs. Sever film. As explained by the producer of the game, Tim Mawson, in a 2001 interview with Eurogamer, BAM! was given access to each new script that Franchise Pictures received.

But developing the game while the film was still being re-written and cast led to some problems. The script changed locations, story beats, and the gender of the main character when Sever was re-cast. Eventually it seemed these changes became too much to handle.

For instance, all of Sever’s weapon art was created with a man’s forearm and hand before the film re-cast the character. BAM! had to create two sets of all of these assets due to the change. The game developers were worried this extra art could cause the game to not fit on a cartridge.

Eventually BAM! and Crawfish were allowed to create the game separately from the movie. As Mawson explained to Eurogamer, “Rather than being a direct port of the film, the game is based in the world in which the film is set.”

BAM! was able to ignore the film’s cast changes and create two characters who were not visually based on any particular actors. “Ecks and Sever are not based on any specific characters…” Mawson explained. “Considering the cast turnover in the last few months, is probably a good thing!” 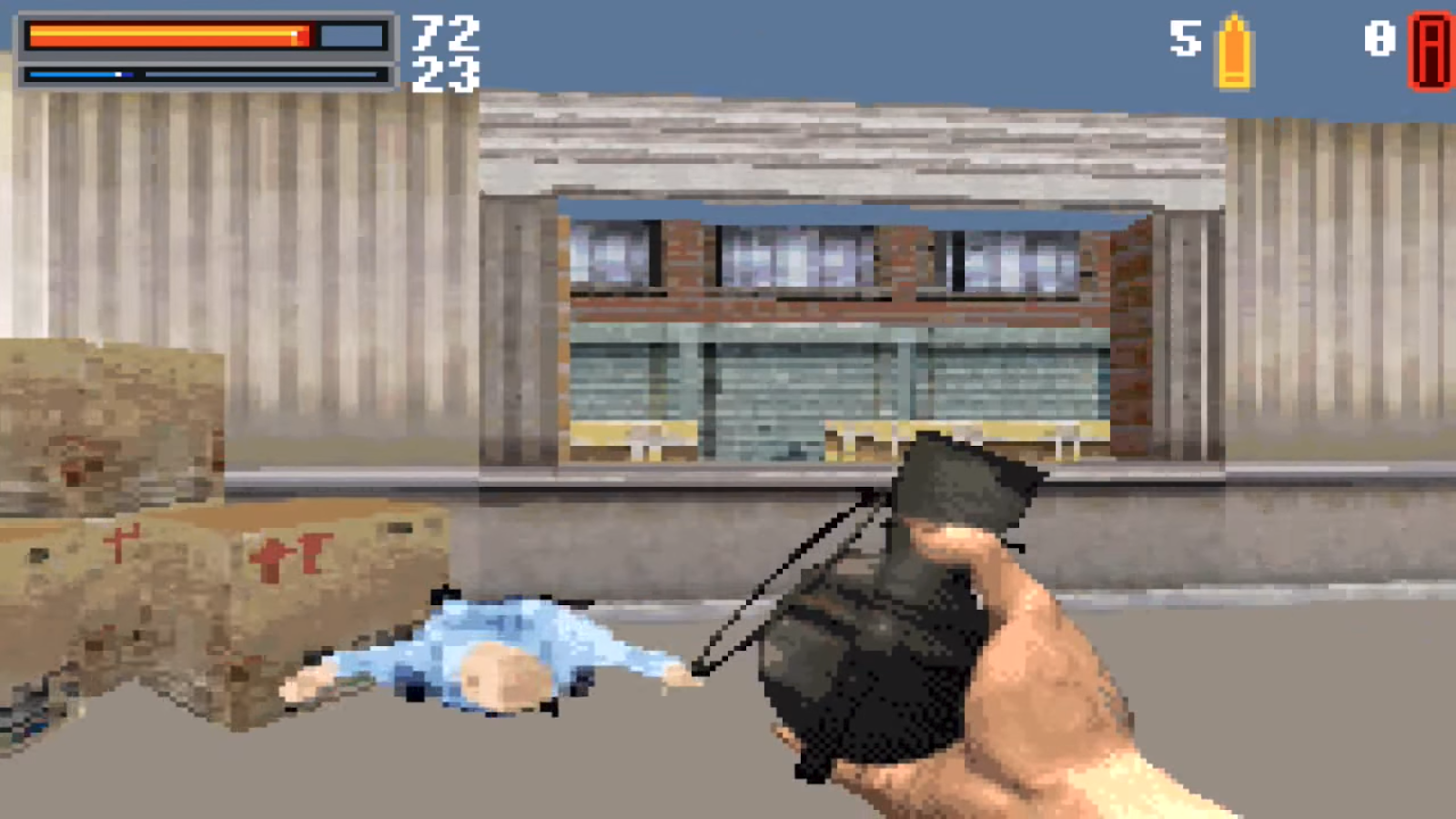 The game was developed in 10 months using a homebrew custom engine created internally by Crawfish Interactive.

It was inspired by first person shooters like DOOM and Duke Nukem. The engine allowed the developers to create a fast and surprisingly fluid shooter on the Game Boy Advance. It also supported the link cable, allowing players to play against each other in deathmatches. 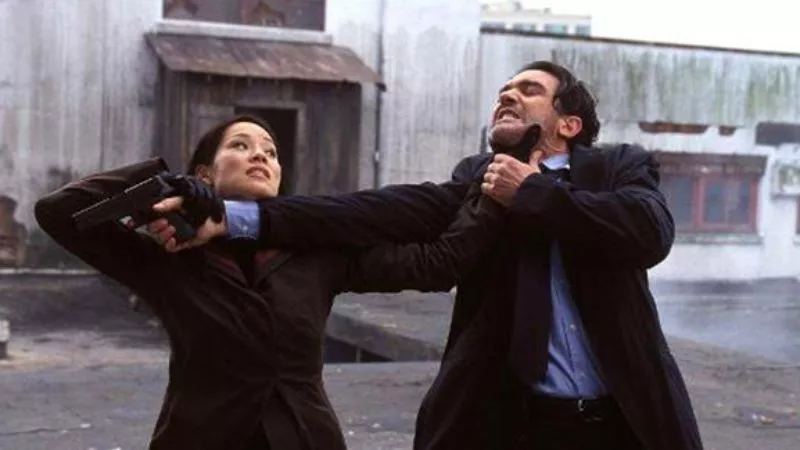 The Release of The Game and The Movie

Ecks vs. Sever was released for the Game Boy Advance on November 21st, 2001, almost a year before the film was released in September 2002. Mawson explained to Eurogamer that the game was released early because the studio was confident in it, believing it could stand on its own without the movie.

Reviewers seemed to agree: Ecks vs. Sever received high praise from most critics. Many were impressed by the visuals, which seemed to push the GBA to its limits.

Nearly a year later, the film Ballistic: Ecks vs. Sever released in theatres to negative reviews. In fact, one of the only positive reviews exists because it was written by a replacement critic at Utah’s Daily Herald, who was filling in for the regular critic while he was on vacation.

It wasn’t only critics who hated Ballistic; audiences weren’t impressed by the film either. The movie had a reported budget of over $US70 million but would end up making less than $US20 million.

Weirdly, another Ecks vs. Sever game was released the same week as the movie. This game was developed by Crawfish Interactive and was also a first person shooter, but it was based more closely on the film’s story and characters.

Ballistic: Ecks vs Sever is a flop of a film that most people don’t even remember existed, yet it somehow received two video game adaptations. There was even a third adaptation planned for the PS2 that was cancelled. Maybe when Hollywood eventually runs out of movies to remake or reboot, we will get a new Ecks vs. Sever film and some more games to go with it.