The last two games I played on my Switch were the original Dragon Quest and Breath of Fire, two early examples of the Japanese role-playing game. Today, they might seem overly simplistic: grind for levels, brute-force through a boss, repeat. These two games are, if anything, even more simplistic than their peers. And right now, that’s just what I want.

I need to admit now that, until this year, I had never actually played the first Dragon Quest. Sorry! I only got into RPGs after the 8-bit era had pretty much come to a close. Even when Nintendo was doing that “subscribe to Nintendo Power and get Dragon Warrior for free” thing, I didn’t take them up on it because I didn’t actually want Dragon Warrior. I figured the release of an upgraded version with lots of quality-of-life improvements was a good time to get into it. I wouldn’t be getting the true 1986 experience, but at least I’d understand the underlying structure of it.

In hindsight, Dragon Quest is fascinating. As the game that kicked off the console JRPG boom, it laid the groundwork for an entire genre’s worth of conventions, tropes, and mechanics. It’s also, even by the standards of the time, a very compact and short game. There are only a few places to visit, a few puzzly bits that can slow you down, and a few boss fights. Most of your time is spent grinding for levels. The quality-of-life upgrades made to the Switch version speed things up to the extent that you can, without even really trying, finish it in a single day.

Breath of Fire, released in 1993, is clearly patterned after the Dragon Quest series, from the prominence of dragons in its plot to the surely non-coincidental fact that one of the first enemies you meet is a little blue slime. And like the first Dragon Quest, there’s little strategy to any of it. In any given battle, the strategy is to just unload with your most powerful weapons and hope you can heal up faster than the enemy’s attacks dish out damage.

By comparison, Final Fantasy V, which was released a year before Breath of Fire, makes you do a lot more than grind and fight. FFV let players arbitrarily assign one of 22 different character classes to each of its four players, then let those characters mix and match their hundred or so different abilities. I still wouldn’t call Final Fantasy V a “complicated” RPG, since you can make your way through it with any combination of classes and ignore all of the more esoteric occupations if you want. But what it represented was a marker along the evolution of the genre in a specific direction, the overcomplicating of RPGs to suit a more and more demanding fan base.

This is what tends to happen within any game genre. The core audience gets better and better at the games, and demands that they get more complex and more difficult to satisfy their increasingly sophisticated tastes and skill at the gameplay. This tends to happen once casual players move on to the next thing and only the genre diehards are left. The evolution of the shoot-em-up from Space Invaders to “bullet hell” is the best example of this.

When I think about the similar trend line in role-playing games, I think about much of Square Enix’s output on the Nintendo DS. I was excited to play the 3D remake of Final Fantasy IV, but found out halfway in that they’d totally revised the gameplay, making it extremely difficult to proceed unless you dove in deeply into new, overly complicated systems. That led directly to the Four Heroes of Light and Bravely Default games, which are similarly aimed at the sort of player who doesn’t feel like they’re earning their progress unless they’re forced to puzzle out the pathways of these deep interconnected systems. 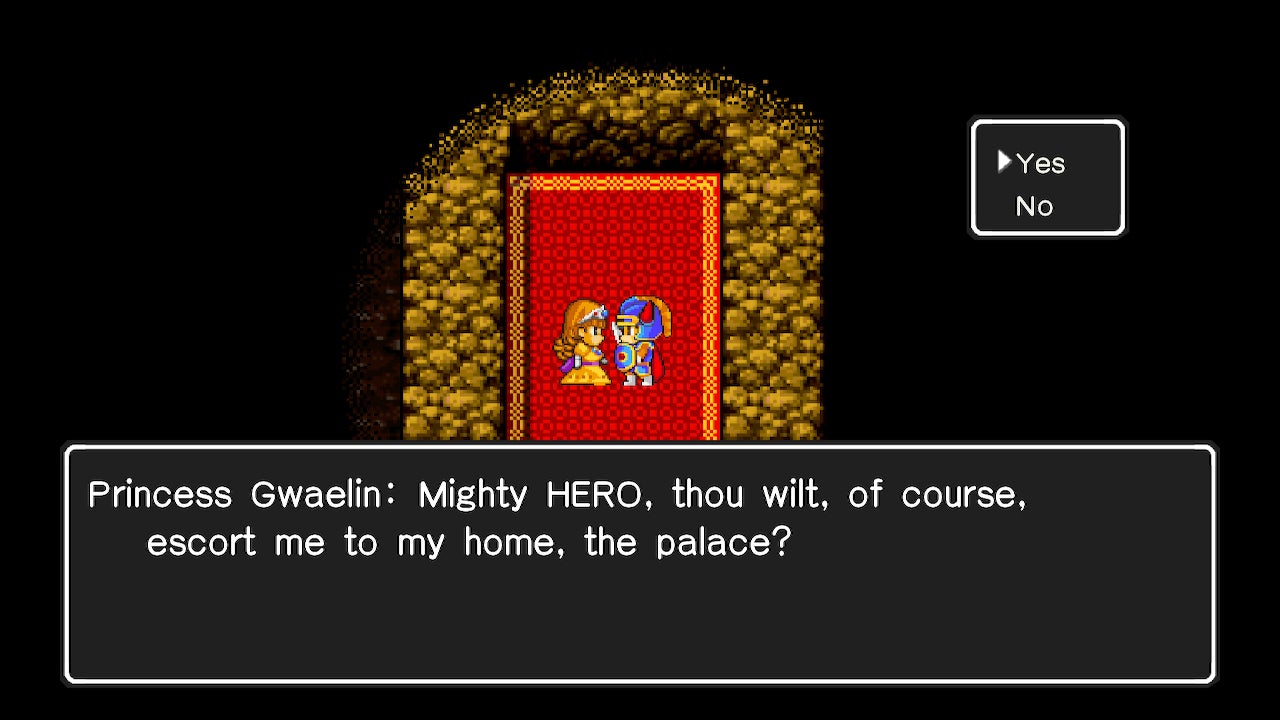 Whatever happened to Fight, Magic, and Item, maybe with a little Defend in there to mix things up? What I’ve found while playing through Dragon Quest and Breath of Fire is that being able to rely on the simple promise made by those limited options makes for a relaxing experience. When I need to chill out after a stressful day, or more likely, need to sneak in a few minutes of game time here and there while dealing with the kids, it’s nice to retreat into a game that feels as comforting as a warm bath.

There was a great Twitter thread a few years ago from game designer Laralyn McWilliams about “grinding” versus “whittling.” We don’t like grinding; having to slog through unfun hours with a game in pursuit of some power or item. But whiling away the hours fighting Slimes in Dragon Quest is definitely what McWilliams calls whittling, something “mindless but relaxing, inducing a flow state. You may end up with a carving, but the main focus is in the now.”

The best simple JRPGs deliver this state whenever you’re looking for it, and they do it while giving you something else to enjoy while you’re doing it, like pretty graphics, funny dialogue, beautiful music. As long as I have the constant promise of getting to explore a new town with its own cool theme song, it’s quite fun to push on, and the game’s other promise to me is that it’s not going to throw a wrench in the process and make me experiment with a million different spells, abilities, systems, or pieces of equipment until I build the only one that works.