Company Of Heroes: The Kotaku Review

I’ve reviewed a lot of video game adaptations as part of my board game coverage for Kotaku. As you’d expect, since this is first and foremost a video game website. Some of those adaptations have been OK, some have been pretty good, but I haven’t played any quite like Company of Heroes before.

Some of those decent adaptations, like Doom or Fallout, tried to replicate some of the themes and basic gameplay hooks of their digital counterparts while still clearly being their own distinct tabletop experiences. You could play those games and think, yeah, this ends up getting to the same general spot as the video game does, and I liked that video game, so I like this too. 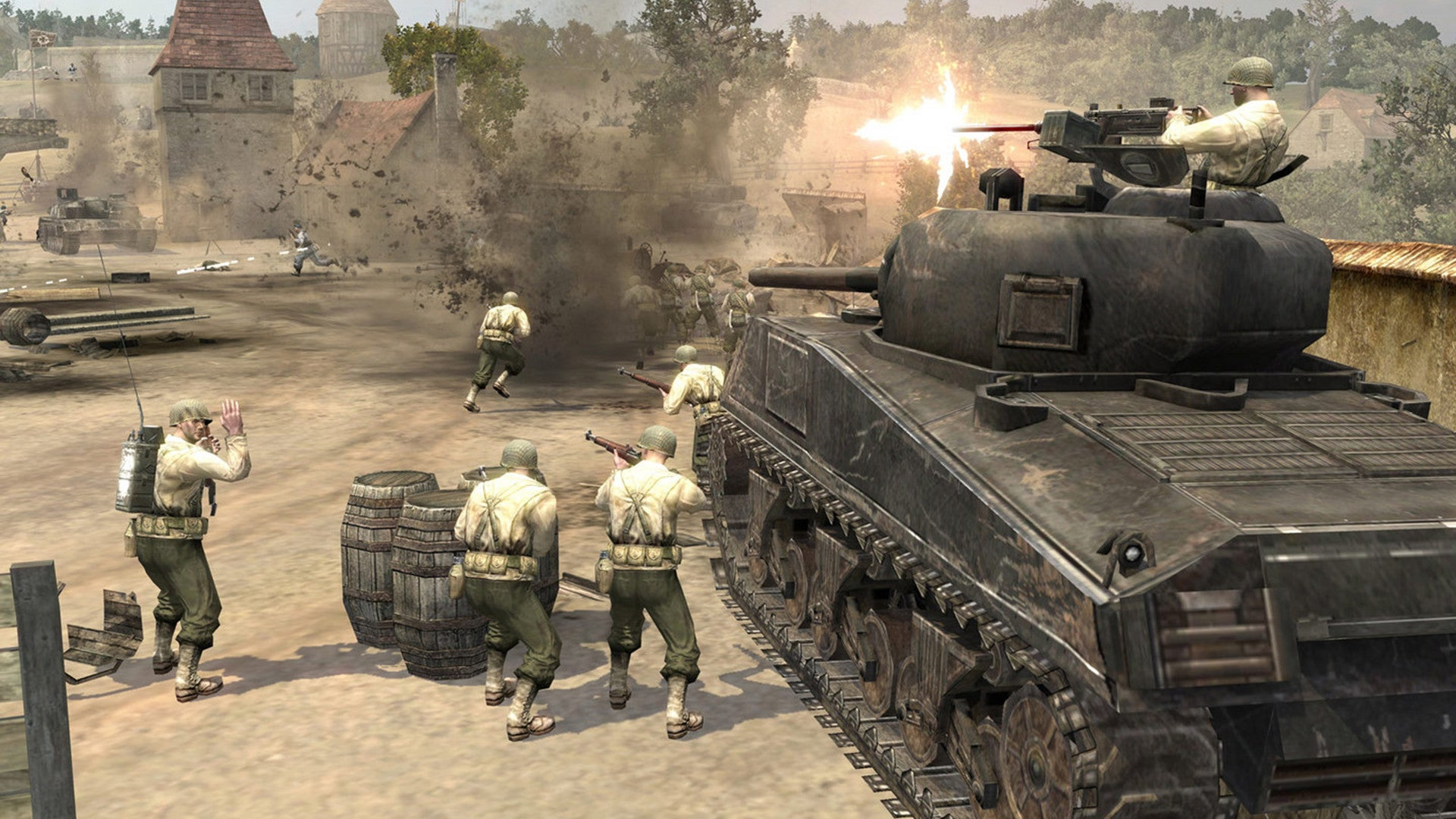 Company of Heroes somehow manages to go even further still. This practically is the video game. All of it. Every system, every aspect, everything you remember and love about the video game, you’ll find it here, only now you’re playing it on a table instead of a PC. It doesn’t even matter that it’s now turn-based while the video game was real-time, you get the exact same feelings, only at a slightly slower pace.

It’s so close I don’t even know if this counts as an adaptation anymore. It’s almost a port, though I say that with the utmost admiration for the designers at Bad Crow Studios, because while the board game manages to stuff everything from Relic’s 2006 release in here, the ways they’ve crammed it in are of course unique to the tabletop, and so worthy of praise.

Company of Heroes ships with a few different ways to play, ranging from standard skirmishes (taking and holding victory points) to HQ assaults, and with the co-op expansion throws in the ability to add (very smartly-handled) AI opponents and teammates to the mix. There’s no campaign, but there are a few big maps you can mess around with, which can be scaled and changed (and even combined if you’ve got the space) to provide different challenges.

There are four factions players can choose from: Germany, the USSR, the USA and Britain. They’re all fairly interchangeable (at least in terms of the quantity and mix of units) and so aren’t locked to any particular side in the war, so you can pit the British against the Americans, or have the Soviets team up with Germany. Through the use of special powers and upgradeable HQs, though, each side largely follows the same basic themes as in the video game, with the British geared towards the construction of emplacements, while the Americans are more focused on infantry gimmicks.

Like I’ve said, the brilliance here isn’t in any kind of pioneering and innovative board game design, since practically every system here is based on one already invented by Relic back in 2006. But the team at Bad Crow deserve immense credit for the way they’ve understood these mechanics and then found ways to adapt them to the tabletop, a skill that can’t be appreciated enough when it comes to these kind of games. After all, if it was so easy to turn a video game into a board game, I wouldn’t be getting so excited about the job this one has done.

Just because this feels like Company of Heroes at every turn doesn’t mean it simply copies from the video game; that would be crazy, since the video game was real-time. Instead it takes every feeling you have from using every system on the PC, and all the satisfaction you get from pulling off a sweeping tactical triumph and fills in the gaps, elegantly giving us the same options and choices, from upgrade paths to flanking opportunities, but handing the execution of those off to dice and hexes.

Cover is here. Buildings that can be used to protect infantry but collapse under fire are also here. As is suppression, and the video game’s perfect rock-paper-scissors balance between units, and the way control points are captured, and the way every battle starts with weaker squads then has to ramp up to bigger guns and tanks.

You can plan and play a skirmish in this board game exactly the same way you would on the PC. Indeed the only area you’d say there’s a marked departure is combat, since that could never be handled in real-time the same way, but even here the board game does its best to make it feel real-time anyway.

At the point in every turn when it’s time to start shooting every unit that’s in range of another gets to assign dice, some of which will do automatic damage, others which can be rolled with a chance of escaping the hits, depending on the type of unit it is and the unit attacking it (a simulation of the way the video game didn’t let infantry attack a tank unless specially equipped, for example). It doesn’t matter if it’s a battered infantry squad with one surviving rifleman or a tank fresh off the factory floor, every units gets to trade blows, and no unit can ever be wiped out without getting a chance to get a shot off of its own. So while combat is resolved by players taking turns rolling dice, the way it’s resolved still plays out as though those bullets and shells were exchanged in real-time. Company of Heroes is a wonderfully tactile experience. Even at its smallest scale it’s still got thick, huge boards to play on, and the plastic miniatures you litter the battlefield with look fantastic, from the smallest infantry squads through to the biggest tanks (which can be painted, and come with decals to apply if you’re into modelling at all). Things get even better with the optional terrain pack, which adds plastic buildings you can place infantry in/on, little plastic sandbags for cover and actual flagpoles with little flags that you get to swap every time a point changes hands.

Between all the units and the board and the mountains of dice and tokens it has all the sensory appeal of a serious wargame with almost none of the hassle, since Company of Heroes is definitely on the Memoir 44 side of the complexity scale; the fun here is had in the broad brushstrokes of tactical engagement, not its minutiae. I know that looks like a lot of dice in these photos, but here you have to imagine each one as an explosion rather than a set of complicated rules.

Company of Heroes is a game where you’re always moving and seemingly always shooting, where frontlines constantly bend but rarely break. It’s a game where the whole war just gently ebbs and flows, your plans always one step away from fruition but so too your opponent’s. It’s such a delicious balance, which the video game nailed, and the board game getting it right as well goes a long way towards making it as enjoyable as it is to play.

Bad Crow Studios deserve immense credit for what they’ve accomplished here. They’ve neither invented or even reinvented the wheel, but what they’ve done is almost like a work of translation, taking the design language of a successful video game and bringing the same joy — if not through quite the same methods — to the tabletop. I once said Company of Heroes was the perfect RTS and I still mean it, but Company of Heroes is now also a near-perfect tabletop game as well.