Halo games have always encouraged the player to go where they’re not supposed to go. Halo Infinite, which saw its campaign hit Xbox and PC last week, is no different. Free advice: If you haven’t done so yet, scale the Tower. It’s a fun climb, and you get a terrific view, but you’ll also unlock the IWHBYD skull, an item that makes the game approximately 17.6 per cent funnier.

Longtime Halo vets will no doubt be familiar with the legacy and effect of the IWHBYD skull, but for the newcomers: In Halo games, skulls modify how the game works, often granting buffs to your enemies but sometimes just making the game more ridiculous for the heck of it (by, say, doubling the velocity of explosions). Skulls are typically found off the beaten path, but are typically worth hunting down if only to shake things up from time to time.

IWHBYD, which first appeared in 2004’s Halo 2, increases the frequency with which enemies use rare dialogue lines in combat. Considering that Halo Infinite’s cannon fodder is genuinely hilarious — and will often poke fun at everything from your combat skills to the human afterlife — it’s well worth your while to find it. 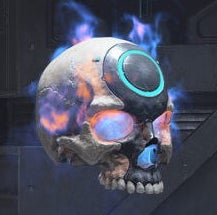 The IWHBYD skull is located on top of the Tower, which is where one of the game’s early campaign missions goes down. (It’s marked by an enormous golden quadrilateral, but if you missed it, the Tower is on the westernmost edge of Infinite’s map.) You can walk right up the legs of the structure, even after finishing the main mission associated with the area. Keep going until you can’t any more. That’s when the climb gets tricky. OK, so, you’ll want to angle yourself facing away from the tower, then use your grappleshot to launch yourself from one of those spokes at an upward diagonal angle, away from the tower. When you’re in midair, quickly turn around and grapple back to the main ledge. (You’ll likely need to have unlocked the grappleshot’s cooldown reduction to pull this off.) It might take you a few tries, but once you make it up, the skull is on an elevated platform in the centre.

Alternative method: You could find a banshee or a wasp and just…fly to the top. But those vehicles, in my experience, aren’t available until the game’s second act.

But hey, get a load of this view: Wait a second…is that a dead guardian? Computer, enhance! Huh. Wonder what that’s all about.