Despite its name, Halo Infinite is very literally finite. Like most story-driven games, 343’s barnbuster first-person shooter comes to a conclusion — and, man, it is bananas, teeing up all sorts of implications for where Halo’s narrative could go. By now, a bunch of you have seen it for yourselves. You probably have many thoughts and feelings. Buckle up.

Spoilers, obviously, for the ending of Halo Infinite.

Halo Infinite’s campaign culminates with a pair of boss fights. The first is against Escharum, the leader of an enemy faction called the Banished. Escharum is the mentor of Atriox, the former Banished leader who beats the stuffing out of hero Master Chief in Halo Infinite’s opening cinematic but dies, apparently, before the game actually gets going.

For a cocktail of reasons including honour, bravado, and the compelling rationale of “I’m the villain so therefore fight me,” Escharum spends the entire game craving a one-v.-one showdown against Chief, eventually kidnapping Chief’s only human friend, a space military engineer known only as the Pilot, for use as bait. You find them. You beat Escharum. He dies. You rescue the Pilot (whose real name, Fernando Esparza, is revealed a few cutscenes later). Cool. Moving on.

The second fight, and the more consequential one, is against someone called the Harbinger, who’s so on-the-nose aptly named she’d fit perfectly in a BioWare game. You see, the Harbinger is an emissary of an ancient civilisation, the Endless, who were imprisoned thousands and thousands of years prior to the start of Halo Infinite. Her goal, for the entire game, is to unleash her people from their prison on Zeta Halo (where Infinite largely takes place). Yours, in the final fight, is to stop her.

That’s when shit gets real. Though you defeat the Harbinger (who so bravely fights alongside an incredibly frustrating brute with a one-hit-kill gravity hammer), she still, apparently, completes her mission. Fernando swoops in and picks up Chief, but notes that he’s been off the radar for three days — even though that fight lasts for an hour, tops. Chief’s AI companion, The Weapon, who’d learned of her startling, blood-soaked origin — that she’s a copy of Chief’s prior AI companion, Cortana — in a series of hologram recordings right before the final fight, mentions that she’s decided on a name for herself. Fade to black.

Oh, what’s this? Another spoiler warning?

Spoilers for the Legendary-only ending of Halo Infinite.

It’s tradition for Halo games to feature two end-credits stingers — one cutscene for those who beat the game, and another for those who beat the game on Legendary difficulty, the highest tier. If you finish Halo Infinite on Legendary, you get to see…the same cutscene as you do on any other difficulty. The only difference is that it’s given a dateline and an enigmatic voiceover track.

The base-level cutscene, which you can see here, shows Atriox opening the jail containing the Endless. Part of the scene is to establish that, yeah, the Harbinger succeeded in her mission, but it’s also meant to be a shocking reveal. You’re telling me this enemy whom we’re repeatedly told is dead but who we didn’t see die on screen wasn’t actually dead the whole time? Get the heck outta here!

That’s only part of the story. For your reference, in the event you’re holding out for May’s introduction of cooperative play to tackle Halo Infinite on its highest difficulty setting, here’s the Legendary-only cutscene:

See? Same thing. But the devil’s in the details.

Let’s place that dateline: 97,368 B.C.E. is shortly after the Halo network was fired in 97,455 B.C.E., thereby wiping all sentient life from the galaxy (well, save for those who hid away on the Ark, an exogalactic facility). Huh.

It’s also telling that Despondent Pyre, the AI unit responsible for monitoring Zeta Halo, is talking in this convo. If you’ll recall, by the end of Halo Infinite, Despondent Pyre is very, very dead. The other chatterbox is the Grand Edict, a presumably high-ranking member of the Forerunner, the people who imprisoned the Endless. At the end of their conversation, the Grand Edict mentions that Offensive Bias, another AI unit, has been deployed. 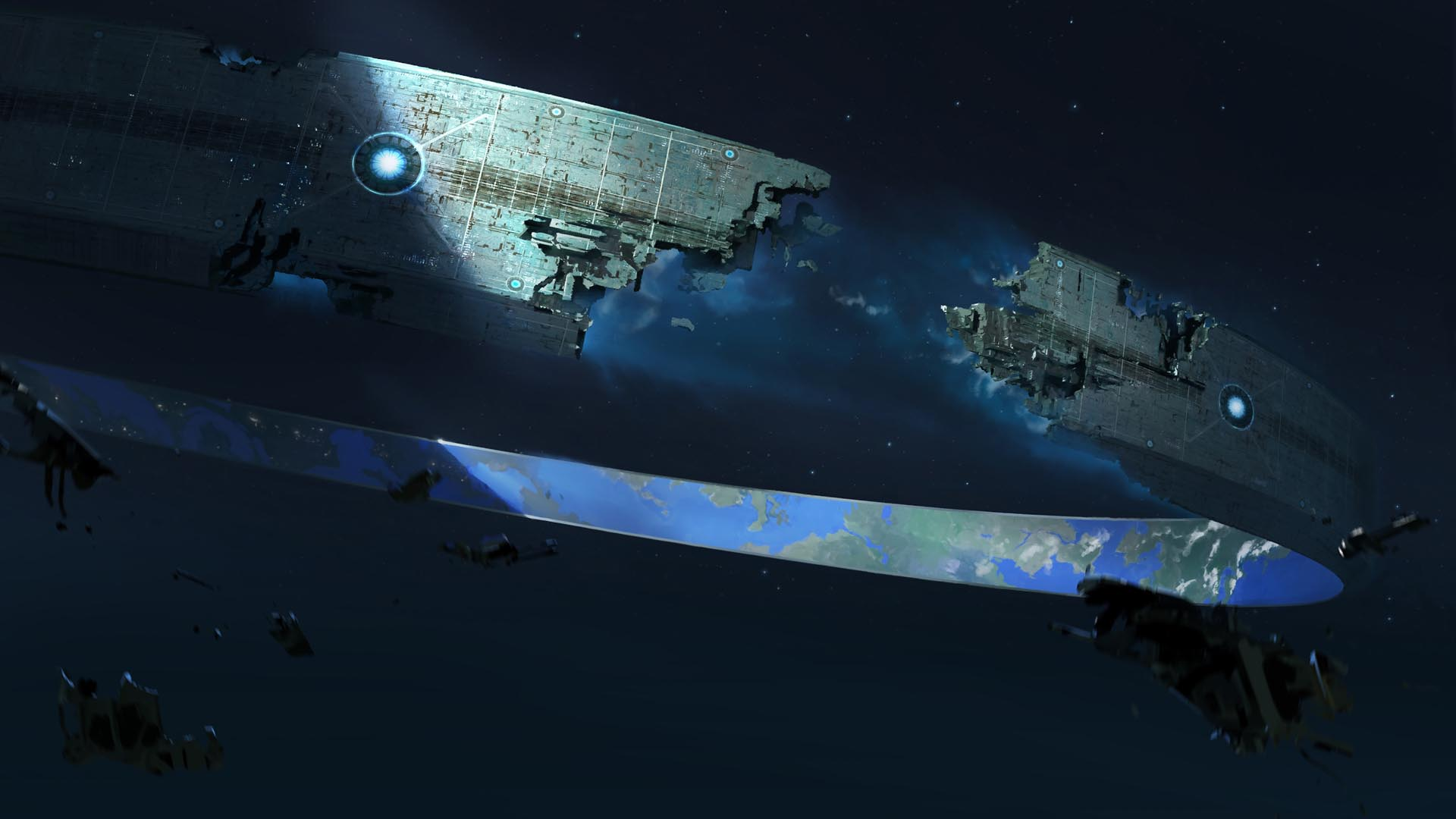 Some fans believe that Halo Infinite is engaged in temporal hijinks. After all, that cutscene is dated to nearly 100,000 years ago; how else could Atriox have ended up there (err, then) if not for time travel? It makes sense that Atriox would want to zip back in time, too. His planet, after all, had been obliterated by Cortana; the only way to stop that from happening would be to fall back on some Avengers: Endgame-level plot turns.

Plus, there’s that whole thing in the current-day Halo storyline where Master Chief mysteriously blips off the radar during his fight with the Harbinger only to reappear three days later. And some of the dialogue in that final voiceover — particularly the part where Despondent Pyre says “Time is not a construct we can control,” only to have the Grand Edict say “We cannot allow it to be theirs” — indicates that time travel will play a role in future Halo storylines.

Other fans aren’t so sure.

One theory posits that the dateline is purely there to put a time to the conversation we’re hearing, not the events we’re seeing. The conversation still happened nearly 100,000 years ago, the theory suggests, but Atriox setting the Endless loose is going down either during or shortly after the event of Halo Infinite. There’s precedent for such a hoodwink: Halo 4 pulled a similar trick with its Legendary ending.

Halo Infinite ends on open questions beyond the matter of time travel — specifically about who, or what, the Endless are. One Reddit user put forth the idea that the Endless is actually the Flood, a hivemind species from the original Halo trilogy, hellbent on eating all sentient life in the galaxy. Another user took that notion a step further and, by stringing together various glyphs and development assets from across the Halo oeuvre, compiled a convincing argument that the Endless is indeed a hivemind, but is more technologically advanced than the Flood. (Seriously, the theory is ridiculously well-researched, and worth reading in full.)

Wherever or whenever Halo goes next, the Endless are certain to play a major role. In 2020, developer 343 Industries said that Halo Infinite wouldn’t receive a sequel, and would instead serve as a base platform for “the next ten years” of expansions and such. Last month, as NME reports, Microsoft filed a trademark for “Halo: The Endless.” Maybe Halo Infinite isn’t so finite after all.