Nobody Saves the World is a game about filling up meters, levelling up, and watching the numbers get bigger. At first I didn’t think it was quite working for me, but like the video game equivalent of an earworm wriggling its way into my grey matter, it wasn’t long before the hours started flying by without me even realising it. It’s a testament to how finely-tuned the game’s combat and exploration is that it never goes more than a few minutes without something new to discover, kill, or upgrade, even if the overall experience can sometimes feel like binging on empty calories.

In 2013, Toronto-based indie developer Drinkbox Studios released Guacamelee!, a vibrant side-scrolling Metroidvania that was as much a button-mashing beat ’em up as a cerebral maze navigator. Drinkbox had released a few games before that, but the lucha-libre-inspired platformer was what put the studio on the map. Then Drinkbox spent most of the years afterward trapped by its own success, releasing ports, remasters, and a sequel (though action adventure swipe-fest Severed was a welcome detour). With Nobody Saves the World, out January 20 on Xbox, Game Pass and Steam, the studio’s 10-year history has been funneled into an ambitious new structure that excels in new areas without losing Drinkbox’s idiosyncratic charm and style. 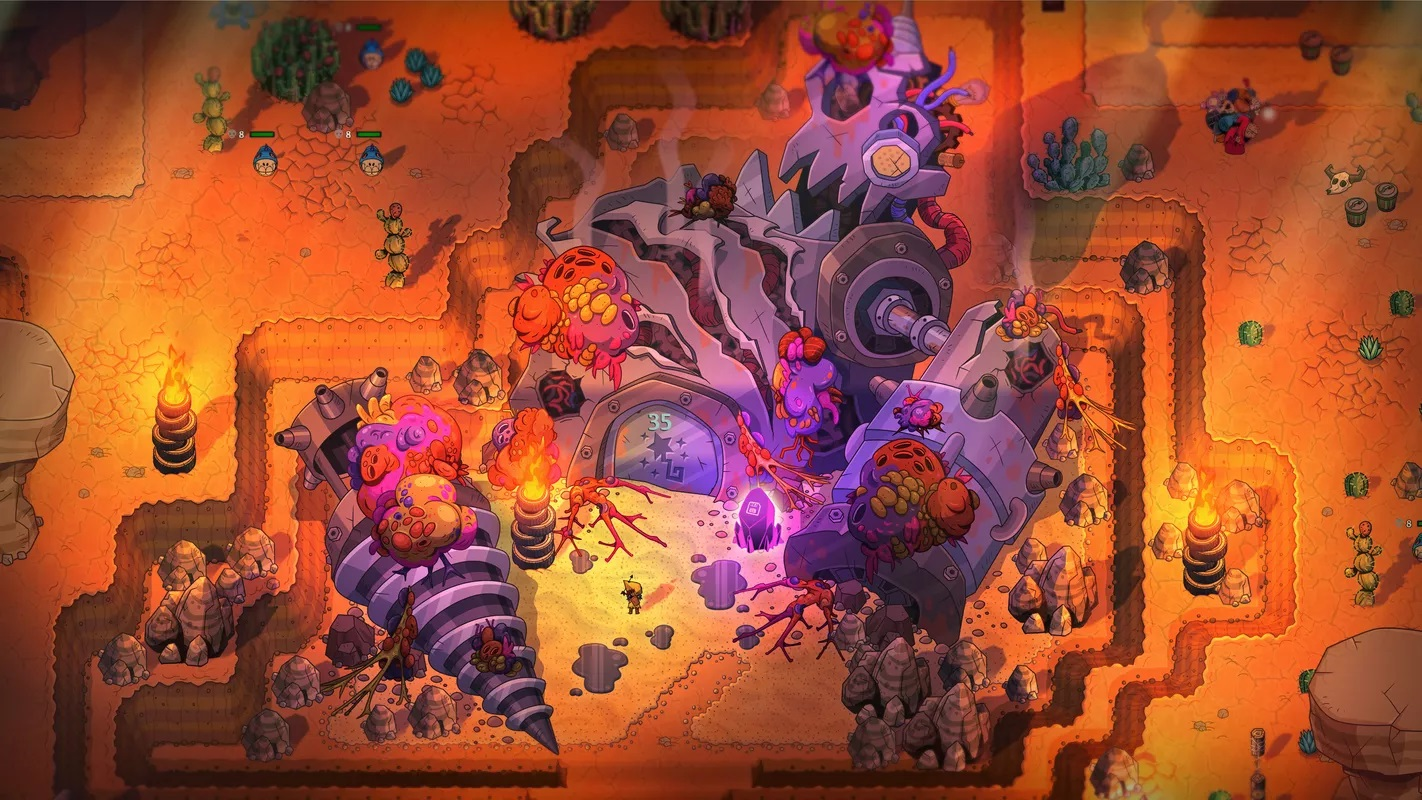 You play as, surprise, a featureless meat puppet named Nobody who’s special power is a wand he can use to shift forms. Need to fit into tight spaces? Become a poisonous mouse. Need to swim across water? Transform into a mermaid that shoots bubbles. An Evil Calamity™ threatens the world, and you’re the only one who can stop it, grinding through dungeon after dungeon in search of new powers and special gems that can save the land from untold horrors. Most of the time you smash through hordes of monsters, earn cash and level-ups, and spend them on ways to augment your powers in a seamless cycle of destruction and progression. This feedback loop is built on three pillars. Each form, like the bow-wielding Ranger or rabbit-spawning Magician, can rank up, unlocking new forms and new powers. These powers can be mixed and matched across different forms, so you can, for example, give the Knight’s crowd-controlling stomp to the Ranger, or the Ranger’s stacking poison damage to the Magician’s army of rabbits. Finally, certain enemies have colour-coded barriers that can only be broken by certain types of damage. It’s a mechanic pulled from the Guacamelee! games that adds some much needed depth and difficulty to the combat. You can also change forms on the fly, expanding your options for how to tackle waves of enemies and boss fights even further. Just when you think you’ve become overpowered, a new combination of enemies and shields will force you to get creative again and find a new strategy.

Rather than levelling up just for killing stuff, you do so through completing specific challenges like killing 50 enemies with poison. Like a well-calibrated battle pass then, Nobody Saves the World keeps subtly shifting your objectives alongside your evolving arsenal. But instead of toiling away in exchange for cosmetic trinkets, you’re working to unlock more fun and effective ways to progress in the game, which unlike the purgatory of a live-service treadmill does have an end. If you like filling up meters and testing out new and creative builds for dispatching enemy mobs efficiently, like I do, it’s a recipe for several long nights of fun. Drinkbox has tried to keep tedium to a minimum by making new milestones come quickly and often. Dungeons you might have to grind a handful of times before taking down a larger boss subtly remix themselves each time in a roguelite fashion so they feel more like theme park rides than prisons.

Nobody Saves The World’s map is also teeming with side quests and NPCs to distract you and send you on brief excursions deeper into its bizarre world. None of the ones I’ve come across felt particularly noteworthy (I’m close to halfway through the game) but they do add variety to the all-you-can-eat buffet. And that’s to say nothing of the eye-popping reimagining of an old-school The Legend of Zelda: A Link to the Past-style overworld, and composer Jim Guthrie’s excellent soundtrack.

Nobody Saves the World can at times feel like it’s overloading you. In addition to how dense and repetitious it can be, every enemy you kill rewardingly explodes into coins and health refills, and every new challenge you complete gets stamped with a shiny seal of approval. Binging works when you never feel full, and with Nobody Saves the World I occasionally felt gorged, but after I had time to settle down again, I always wanted to go back for more. I only wish some of my favourite blockbuster RPGs could nail down their progression so tightly.