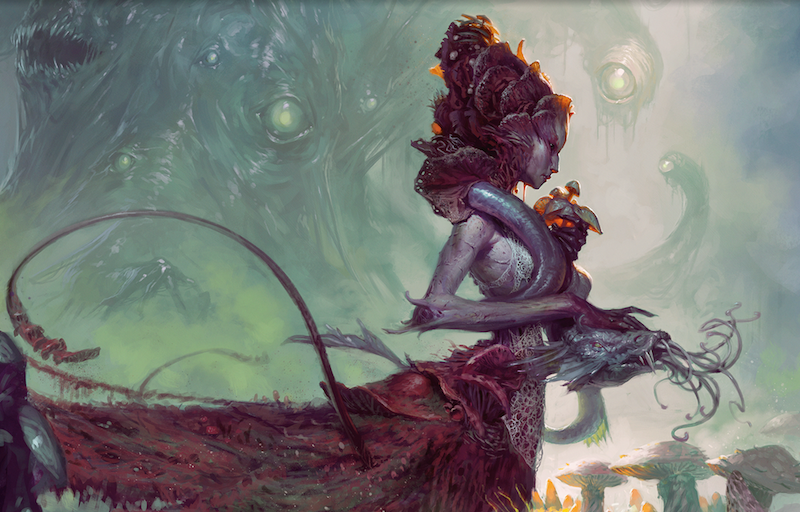 Zuggtmoy from Rage of Demons

Dungeons & Dragons has historically used attractive monsters, and especially of the female persuasion, to appeal to potential players. Busty demons and lithe wood maidens populated its source material, namely its Monster Manual, throughout the last 40 years.

With recent editions and supplements, D&D has phased out its bare-breasted female monsters and included more sexy male ones, making it clear that the game is going in a different direction.

Now, as the game's 5th edition, released in 2013, works to bring in a bigger audience, you'll see fewer bare breasts and more abs in the Monster Manual and its Fall, 2016 supplement, Volo's Guide to Monsters. Recent design changes to the game's beasts reflect how D&D meditated on its own marketing practices.

Mike Mearls, the Senior Manager of D&D, told me that "In the game's earliest years, you definitely had a sense of nudity (looking at you, topless succubus in the 1st edition DMG [Dungeon Master's Guide]!) as something that was becoming a common counter-culture of the time." Now, D&D is a different game. The counter-culture Mearls refers to was, for the most part, marketed to straight men. 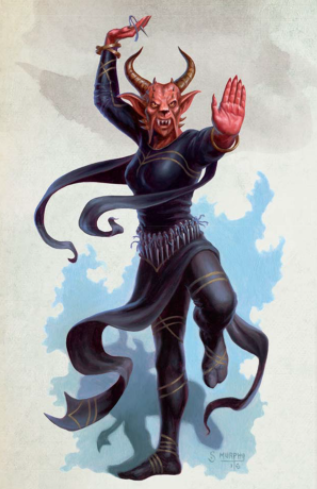 D&D's early fandom was mostly male. A 1978 survey puts the percentage of female fans at between .4 and 2.3 per cent. The game's disinterest in courting women was hotly discussed in early '80s Dragon magazine columns like "Dungeons aren't supposed to be 'for men only'" and "Women want equality. And why not?". In AD&D, players could reference a "Harlot Table," an array of twelve "brazen strumpets or haughty courtesons." Early on, the game's rules penalised players' strength score if they chose to be female. It's not hard to see how the game's rules, illustrations and culture, so mired in wargaming, engendered a bit of a boys' club

Gary Gygax, the game's co-creator, was a big pulp fantasy guy. Conan was his bible. And, in Conan, women are hot, well-endowed, and ready to get down — even enemy or non-human women. In Robert E. Howard's "Frost Giant's Daughter," a sexy frost giant who, "save for a light veil of gossamer" was "naked as the day," is used to lure the barbarian to her father and brother, who would kill him.

It's a femme fatale classic trope, Mearls explained. Greek myths and European folk tales, from which D&D take inspiration, often use these non-human women as vulnerable lures or fierce beasts. Mearls said, "I imagine in the early, male-dominated years of the hobby that took root and became a cliché."

"I think there was a feedback cycle where the inner circle of fandom was mostly male, that group gave feedback on what they liked, and you had art that delivered what they wanted," Mearls said. For D&D's Monster Manual, the game's first hardcover supplement, that was especially the case.

Mariliths, Erinyes, Lamias and other female monsters are canonically naked with large breasts in the late '70s AD&D (the Dryad is hiding behind a tree in a tattered dress). AD&D's Monster Manual also features a completely naked succubus, crouching down with her arms covering her nipples.

It makes sense — a succubus is traditionally seductive, and appears naked in ancient sculpture and Medieval paintings. But in AD&D, 2e 3.5e or 4e — between the late '70s and '00s — -there was no male aspect of that mythological paradigm, no Incubus. He finally appears in a 4th edition supplement, the Demonomicon, in 2010, two years after 4th edition's release.

Monster Manual canon added the Incubus in 2013's 5th edition, D&D's Lead Rules Developer Jeremy Crawford explained to me, to "echo the wondrous variety in the human experience and in the myths that muse on that experience." 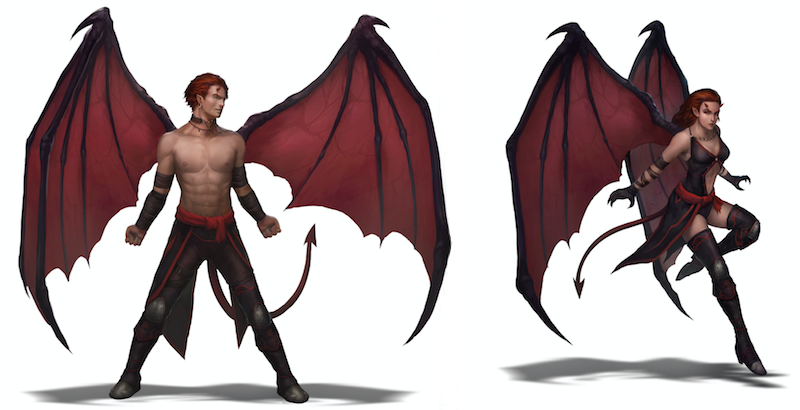 If a creature is canonically sexy, Mearls said, D&D's 5th edition team designed it with a male and female form. In 5e, the Incubus happens to resemble a Buffy character — definitely a bid for straight women's interest (in the Demonomicon, he's fully-armoured, cross-armed and leaning back in a chair). "We're equal opportunity cheesecake merchants," Mearls added. "We don't assume heterosexual male players."

My early years with D&D can answer that question. The first or second time I played in college, my buddy Sam showed me a picture of the nymph in the 3.5 edition Monster Manual. He flipped through the book and paused on her, a slender, red-haired woman wearing only a thin cloth.

She rose from the water, the fabric sheer and revealing her every detail. The nymph is described in the AD&D Monster Manual, and in the next Monster Manual edition, she's wearing the same sheer dress as she is in 3.5. That, Sam said, is what got him into the role-playing game. 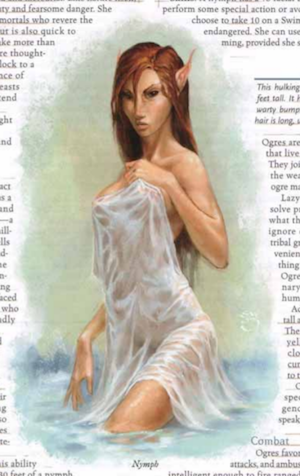 D&D 3.5e's Nymph, an example of how D&D has portrayed female monsters

He said, "When I saw that image of that nymph, I was excited, not just because I was turned on, but because, strangely, it wasn't weird. We were just fantasy nerds saying 'oh, man, sexy nymph.'" He felt like a part of a community that accepted him.

"Because of the fantasy of D&D, I felt safe in my attraction to her. It played a role in my personal sexual awakening," he said. Later, he bought some D&D books and accessories. D&D's edginess, which helped connect my friend Sam to his first D&D party, seduced people on the outskirts of mainstream culture.

"I think it was natural to gravitate toward art that, at the time, would have been considered edgy and 'out there,'" Mearls added. And much of that art showcased ripe, young lady monsters — still ubiquitous in bedroom fantasy posters and figurines.

I never really identified with that. Sure, there were ripped male demons in the D&D Monster Manual. But that wasn't a lure for me, and in any case, those monsters' design didn't really appeal to me or my straight, female friends. I loved the idea of communal storytelling, of escapism, of gaming a very strict (and at that point, complicated) ruleset to get an intended outcome. The Nymph, for me, felt a little off-putting.

By the 4th edition of D&D, the nymph is absent from the Monster Manual. By 5th, it's clear that she's gone for good. In an email, Mearls said that nymphs were simply unpopular monsters among Dungeon Masters. 5th edition was designed after crowdsourced playtesting, and over 175,000 responses from early testers confirmed that gamers prefer elder brains and beholders, apparently, to monster boobs.

"When we considered the audience, we tried to think of how men and women would react, and make sure the reaction we elicited was in keeping with the monster's character and the design intent," Mearls said. 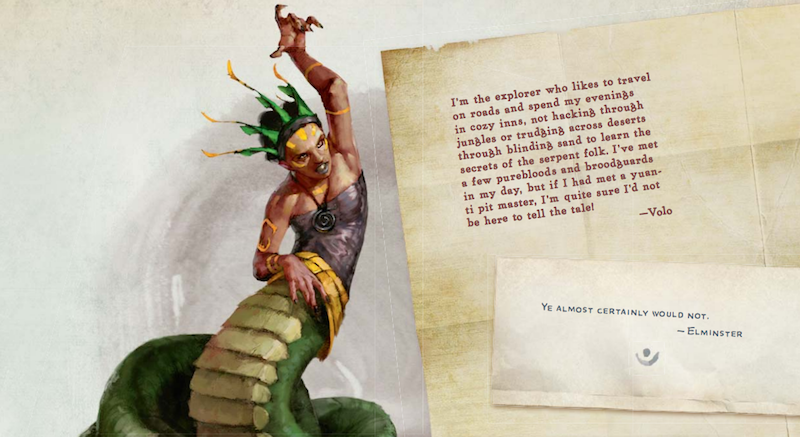 In the 5th edition of the Monster Manual, nudity still there when it needs to be — but, when breasts can be covered, generally, they are. Even the harpie, canonically unashamed of her body, is crouched such that none of her lady-bits are visible. Bare breasts are absent from Volo's Guide, the latest supplement to the Monster Manual out in October of this year, in what Mearls says was a conscious effort to "make sure that the art we presented was as appealing to as wide an audience as possible."

Probably the most stereotypically "sexy" female monster in Volo's Guide is the Yuan-Ti Nightmare Speaker, a dark, muscled woman in a tight halter top with a snakelike torso. Her male counterpart, the Yuan-Ti Pit Master, is long-haired, hard-bodied and undeniably sexy. 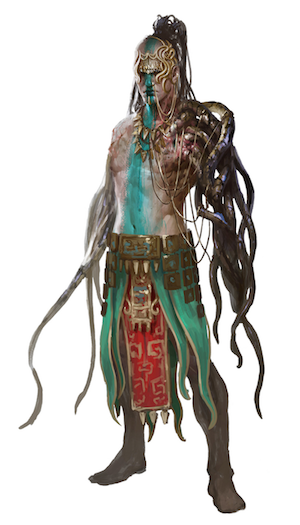 It's worth noting that D&D itself encourages players to riff on what's in the source material. A Yuan-Ti Nightmare Speaker can be naked in your campaign. The nymph can exist, and she can be wearing a boa and red platforms. How sexy you want your monsters to be all depends on the creativity of your Dungeon Master. For new audiences getting introduced to the game, though, a more toned-down or even sexuality across genders may prove more seductive to diverse audiences.