For the past five days, I’ve been glued to Twitch, unable to look away from the virtual car crash that is popular streamer Sodapoppin playing on a modded Grand Theft Auto V role-playing server.

Since the middle of last week, popular Twitch streamers have been flocking to a Grand Theft Auto V role-playing server called “No Pixel,” where people can play as a cop, a criminal, a doctor, a different criminal—you name it. Sodapoppin has been playing as a regular dude who works at a vineyard. Other popular streamers, including Summit1g, Lirik, TimTheTatMan, Forsen, Moonmoon, Andy Milonakis, and Greekgodx, all of whom have hundreds of thousands or millions of followers, have joined in.

These streams have put GTA V in league with Fortnite in terms of viewers and led to the formation of an interconnected streamer cinematic universe that is effectively akin to 10 concurrently running 24/7 television comedy dramas. It’s a terrible, dumb mess that I can’t stop watching.

Not everyone can play “No Pixel.” Players must apply to in order to join. The server’s application asks a number of questions, some of which require you to be in-character. For example: “You’ve found what looks like a random car in the street with a load of drugs inside. What do you do and why?” The application process sets the tone for the whole server, which has a near-zero-tolerance policy for breaking character.

Beyond that, you can be whatever you want. No Pixel is by no means flawless, but that’s part of its appeal: RP neophytes and longtimers alike have to role-play around the surreal, glitchy strangeness that inevitably arises when people pile player-made modifications atop the already teetering codebase of a complex open-world game.

Grand Theft Auto role-playing is not a new thing on Twitch, with streamers like Sheriff Eli—a former real-life police officer who role plays a hard-arse cop in GTA—gaining dedicated followings over the years. But No Pixel sports especially sophisticated role-playing features. 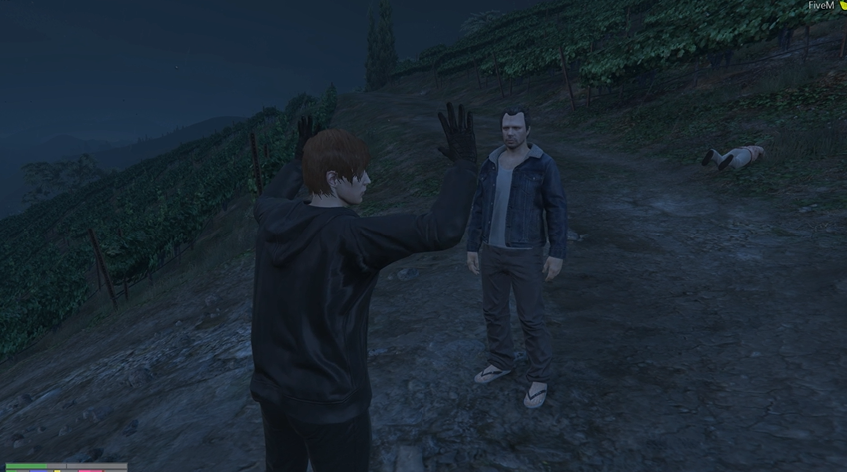 Some streamers have taken to it better than others. Summit’s proven good at facilitating elaborate scenes put on by experienced GTA V role-players, for example, while Lirik has decided to just literally be Avon Barksdale from HBO’s The Wire. Then there are the streamers who’ve taken to role-playing less like ducks to water and more like disgraced mafiosos with cinder blocks tied to their legs.

Andy Milonakis makes every scene he’s in with other streamers painfully awkward, but even he’s got nothing on Overwatch pro turned wailing Twitch banshee man xQc, who managed to get in trouble with the people running No Pixel by acting like a violent madman. That’s great when you’re playing GTA V the regular way, but extremely against the rules when you’re supposed to be role-playing.

I’ve found Sodapoppin’s GTA RP streams to be far and away the most consistently entertaining, mostly thanks to a very good premise: His character, Kevin Whipaloo, is a hapless scrub with crippling anxiety who wants to make an honest living—in Crime City, USA, where all that ever happens is crime, and the clocks don’t even have numbers on them, just 12 different instances of the word “crime.”

Inevitably, all of his attempts to stick to the straight and narrow go horrifically wrong, in part because even as he tries to make peace with everyone, he accidentally snitches on them—something Sodapoppin did on accident at first, but swiftly incorporated into his act. On his first day in the game, he pissed off the police and got in trouble with multiple major gangs (all played by actual GTA role-players), but—miraculously—managed to collect $US2,000 ($2,812), pay them off, and clear his name without ending up in prison.

The next day, he pissed off another gang and took a meeting with them in a parking lot to head off any major altercations at the pass. There, as they conversed, a torso in a Santa hat crawled by, as though it was all as normal as day. This, in a nutshell, is GTA RP on No Pixel:

Jankiness, it turns out, adds new dimensions to role-play, keeping even the best improvisers on their toes. Case in point: Sodapoppin’s character, Kevin, has accidentally kicked or punched multiple people. The first time, it was a doctor who’d just saved his life, and he apologised profusely.

Later, he managed to clock an in-game friend, and—fed up with apologising for this exact thing—told him it was to keep him ready for anything. Then there was the time Kevin’s boss was assuring him his job was above board and, specifically, “safe,” only for a pack of wild animals to magically appear in the building next to them. He didn’t have anything for that, but honestly: Who would?

Kevin owes a lot of his success to his supporting cast. First and foremost, there’s Eugene, an old British man (played by a young British man) with severe memory problems who swears he’s fought in 38 world wars. Alongside another seemingly sociopathic old man named Mel, Kevin and Eugene have formed Prune Gang, the least competent group of pseudo-criminals in the history of pseudo-crime.

Last week, they attempted to seek revenge on a blue-haired woman who apparently kidnapped them and left them for dead (I say “apparently” because the incident left them in the hospital with amnesia; these incredibly bad-good player-made plots can reach seasons-long soap opera levels of complication in a single afternoon). After the painstaking process of getting a gun, they were ready to go. Then Kevin tried to back out of a gas station and blew the entire gang sky high:

So far, Kevin’s only run-ins with the law have been the result of other people’s actions. Yesterday, for instance, somebody robbed him at gunpoint, so he reported them to the police. An officer then informed Kevin there was a warrant out for his arrest due to an assault charge. So, in effect, he snitched on himself.

When Kevin’s not bumbling his way through crimes he refuses to actually commit with his own hands, he’s working for his boss, Joe, at a vineyard. Nearly every time they meet up, Joe comes at Kevin with a voice that exudes ice-cold intensity, accusing him of a crime or misdeed, or implicating him in one. Kevin believes this, because he’s in a city where literally everybody else does murders on a regular basis.

Then Joe reveals that he’s just fucking with Kevin. He’s slowly, expertly escalated these pranks, making Kevin—and at this point, I mean Sodapoppin, because both the person and his character have legitimately fallen for it every time—believe he was going to have to move a body, that Joe was going to execute him in a cellar, and finally, that Joe had been killed in cold blood in the dark of night by his own boss, who pulled a gun on him and fired actual shots, at which point Joe pretended to be dead for multiple minutes.

Then they said “gotcha” and told Kevin that was the final prank, which I believe, because I’m not really sure how you top that.

Viewers love these moments, because they’ve been following Sodapoppin for a long time, and they like to point out when he’s “not acting.” Sodapoppin has even copped to it himself on a few occasions, saying, for example, that a loud, chaotic in-game party actually caused his real-life anxiety to act up. The streams blur the line between personality-driven entertainment and character-driven role-playing.

Some of the stuff on these streams is bad. Really bad. People role-playing as gang members regularly draw on crude racial stereotypes for their accents and storylines. Not everyone does this (thank goodness), but the ones who take that tack do so almost gleefully, likely because they could never get away with behaving so egregiously in the real world. People are also frequently arseholes to women, with one character, Ricky, shutting down an argument with a woman player by saying that he wasn’t using “stupid bitch logic.”

That’s just the tip of the iceberg on that front: Twitch chat hates it when women role-play, saying things like “sex her,” “kill her,” and “tell her to shut her cock-sucking mouth,” often in all-caps. You won’t be surprised to hear that LGBTQ issues don’t get handled any better.

There is, for example, a “trans” role-player Kevin sometimes encounters who identifies as a “trans-pacific railway” and yells for people to ask them their pronouns. Other characters crack jokes about how ugly they are, because of course. Yes, they’re role-playing criminals, but there are so many more interesting ways to be bad, and yet these people tend to fall back on the same tired, mean-spirited edgelord tropes.

Thanks to the influx of big streamers, No Pixel is now overrun with new players and wannabe players. Compounding issues have led the people running the server to temporarily shut down sign ups. This adversely affects the game’s pre-existing community, some of whom I’ve seen pop into Sodapoppin’s chat to express their frustration.

I can’t ignore the bad parts of the streams, but I find myself drawn into the good stuff, to the playful improv that the best of these streamers is doing live in Grand Theft Auto for their audiences. There’s potential for wild stuff and—when people are actually trying—some impressively funny and considered character dynamics.

If you tune in, be warned that there will be some crappy behaviour, but if you find the right moments, you’ll also find some of the best—good—trashy entertainment you can find right now on Twitch or any other screen.