Yes, Patreon is making adjustments again—as some creators have suspected and feared. The recurring crowdfunding site agonized over a relatively small change in how it does business, and in doing so it’s setting an example few other platforms live up to.

After an attempted fee change in December of 2017, which Patreon’s current SVP of Product Wyatt Jenkins described to Gizmodo as “when the whole internet turned on us,” trust is still low. It was his seventh day with the company. But in speaking with Jenkins last week, it seems Patreon is doing everything in its power to regain that trust, do right by its users, and provide transparency at a time when evasive behaviour is the norm for tech companies. “If we changed pricing at all on existing creators,” he said, “we would have a firestorm on our hands.”

What is Patreon changing, exactly? It’s building out usage tiers, potentially one of the dullest overhauls a company can make to its backend. Whether or not this represents, as Jenkins stated, “the future of Patreon,” what’s crucially important is how it’s communicating the change to current users. 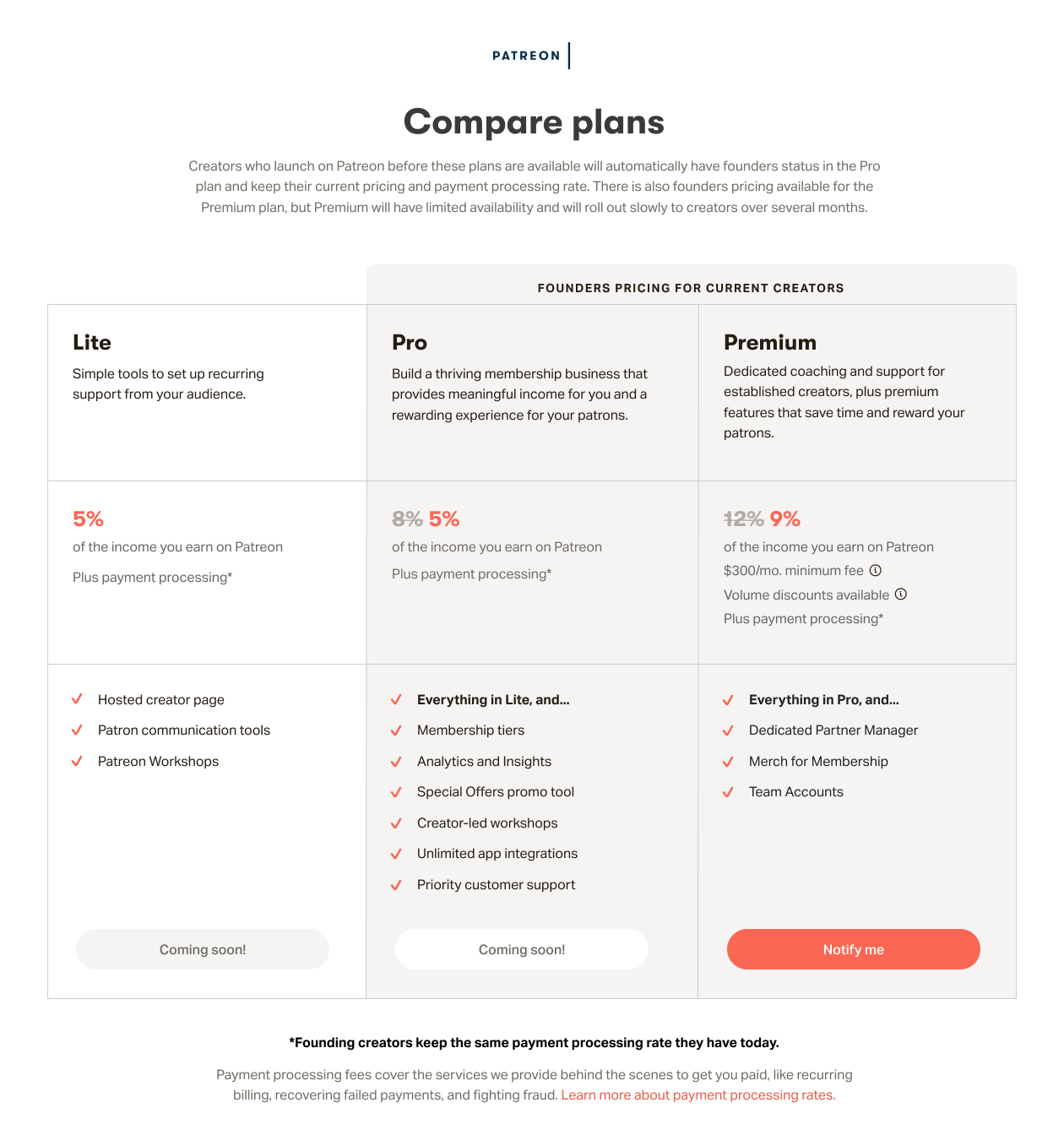 In nuts and bolts terms, the tiers present three options: one for the most casual of crowdfunders, another more full-featured option for the bulk of users, and a limited, bespoke set for the biggest creators in need of the white glove treatment. Crucially, current users are grandfathered into the middle-tier and retain all the features they have now, at the same cost. After what he claims were meetings with thousands of creators over the past year, and a great deal of learning from 2017’s debacle, Jenkins realised “Patreon does not get to make unilateral decisions about creators and their fans. Creators are sick of that. That’s the way YouTube works. That’s the way Facebook works.”

Premium will, at first, have limited availability. The number of creators who currently meet the $US300 ($424) per month fee minimum is, according to Jenkins, a single digit per cent of the approximately 120,000 active users. It’s also something the platform will have to actively staff up for. “The original model—the 5 per cent model—doesn’t work” for big creators who have more needs, Jenkins said. It comes with a few perks beyond personalised treatment, like a specialised merch option which he likened to the model Chicago Public Media uses that rewards contributors for loyalty over time.

That said, “if a creator just wants to have a membership and then sell some t-shirt and stuff, wherever they have that, that availability is for anyone in any tier.” Again, nothing really changes. And Patreon really, really wants to stress that. Even still, the changes won’t go into effect until May, giving current creators two months lead time to make any necessary preparations. Patreon also plans to set up a livestream to walk creators through the changes to prevent another uprising. “We’re really going up above and beyond to make sure no one feels surprised,” Jenkins said.

Part and parcel with the tier changes, Patreon is also adjusting its fee structure somewhat, but again, Jenkins claims, “existing creators keep the exact same payment processing rate they have today.” Mainly the changes appear aimed reducing fees on small donations, which for some creators, makes up the bulk of their funding. As a result, Jenkins stated, “there is a cohort of creators who could potentially do better in the new fees and we’re gonna reach out to them and tell them ‘if [changing to the new plan is] something that’s interesting to you, you’re welcome to do it.’”

Of course, those who sign up for the Pro or Premium tier after today’s announcement will be paying higher fees to the platform—essentially subsidizing early adopters as well as helping to fund the future of the service. But the Lite tier seems to be where the platform expects to see its future growth coming from. Patreon believes it’s losing more casual creators during the signup process because new users may be overwhelmed by options and the company is hoping fewer barriers to entry might help with retention. Acquisition of new users is clearly a concern with YouTube’s ‘Join’ button quietly edging into Patreon’s turf last August.

“If you’re YouTube, your number one customer is advertisers—because that’s where the money comes from—and your number two customer[s] are end- users—because you need watch time to get those advertisers to spend dollars— and your number three customer are people who make content,” Jenkins explained. “You just follow the money on a business and you know what they care about.” Even in the most cynical terms, as he notes “Patreon takes a percentage of creators so it’s pretty clear who our priority is.”

There’s no shortage of tech companies that would like some involvement in every aspect of our lives. Strange how refreshing it is to go back to just being a customer on known terms.