Vampironica Returns For Another Bite Of Her Own Comic Adventures

Archie Horror’s literal re-vamp of Riverdale’s highest-class high schooler Veronica Lodge has already given us plenty to sink our teeth into ” whether it’s in her debut miniseries or her ongoing crossover with Jughead: The Hunger. But it’s once again time for Ronnie to spread her bat wings and fly solo, and we have the first details on her brand new comic.

Set after the events of Jughead: The Hunger vs. Vampironica ” which has had dire ramifications for not just the titular supernatural heroes, but, incredibly, the entire Archie Comics lineup/multiverseÂ as we know it!? ” Vampironica: New Blood sees Ronnie return to her own universe, forever changed by the events of her time with werewolf Jughead.

Penned by Frank Tieri and Michael Moreci, the five-issue series will see Audrey Mok’s debut on interior art for an Archie Horror series, alongside Matt Herms and Jack Morelli on colours and lettering, respectively.

“I feel lucky and honoured to be working with Archie Comics again! Working on a horror title is unlike my previous work for Archie,” Mok said in a statement provided to Kotaku. “It is an opportunity to bring in [a] different tone and approach on the art for this series. I am also very excited to be working with Frank and Michael, with their incredible writing, I cannot wait to know where they take us as we follow Vampironica’s journey in discovering more about herself and exploring the vampire world.” 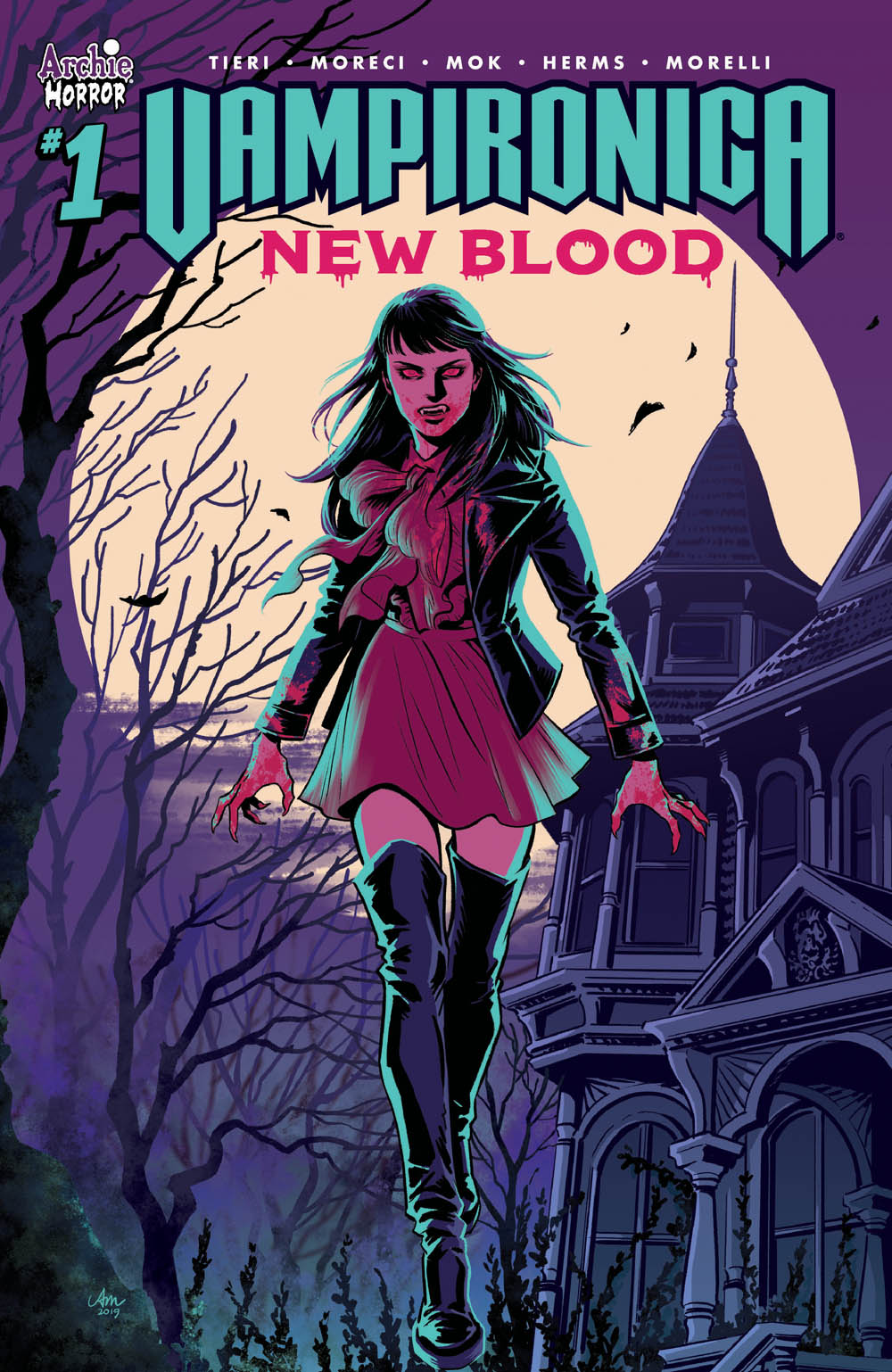 “What can I say? I had so much fun writing Vampironica in Jughead: The Hunger vs. Vampironica that I just had to keep doing it ” and thankfully Archie tolerates me enough to let me keep doing it,” Frank Tieri joked in a statement to Kotaku. “And yes, for fans of JvsV, we’ll def be spinning things out of this series from the reveals made in that crossover. You can always say that JvsV was a prelude of what was to come!”

It’s not same old same old however ” at least, as far as “same old same old” can be for a vampire. New Blood will build directly off a gamechanging reveal on a more personal level for Veronica that fans will uncover in Jughead: The Hunger vs. Vampironica #5, that sees her question everything she’s known about her and her family’s vampiric legacy.

“In JvsV #5 ” out in a couple of weeks, kids! Buy multiple copies! ” we’ll see a MAJOR game changing reveal as far as Vampironica goes,” Tieri teased.

“It really changes everything as far as what she knows about her and her family. How does she deal with this shocking revelation now that she’s back in her own reality? And what other Lodge family secrets has she been kept from? It all comes to a head in our first arc as what she uncovers may actually lead to nothing short of an all out full-fledged vampire war. So yeah, I guess everyone can see we have some big plans for this book… plans that’ll change Vampironica’s world forever.”

“Our approach to continuing Veronica’s vampire tale is to really ground both her character and the story itself,” Michael Moreci, Tieri’s co-writer on the series, added. “Essentially, this is a coming-of-age story we’re telling, with some cool twists and turns and a whole bunch of bloody horror for readers to ” pun fully intended ” sink their teeth into.” 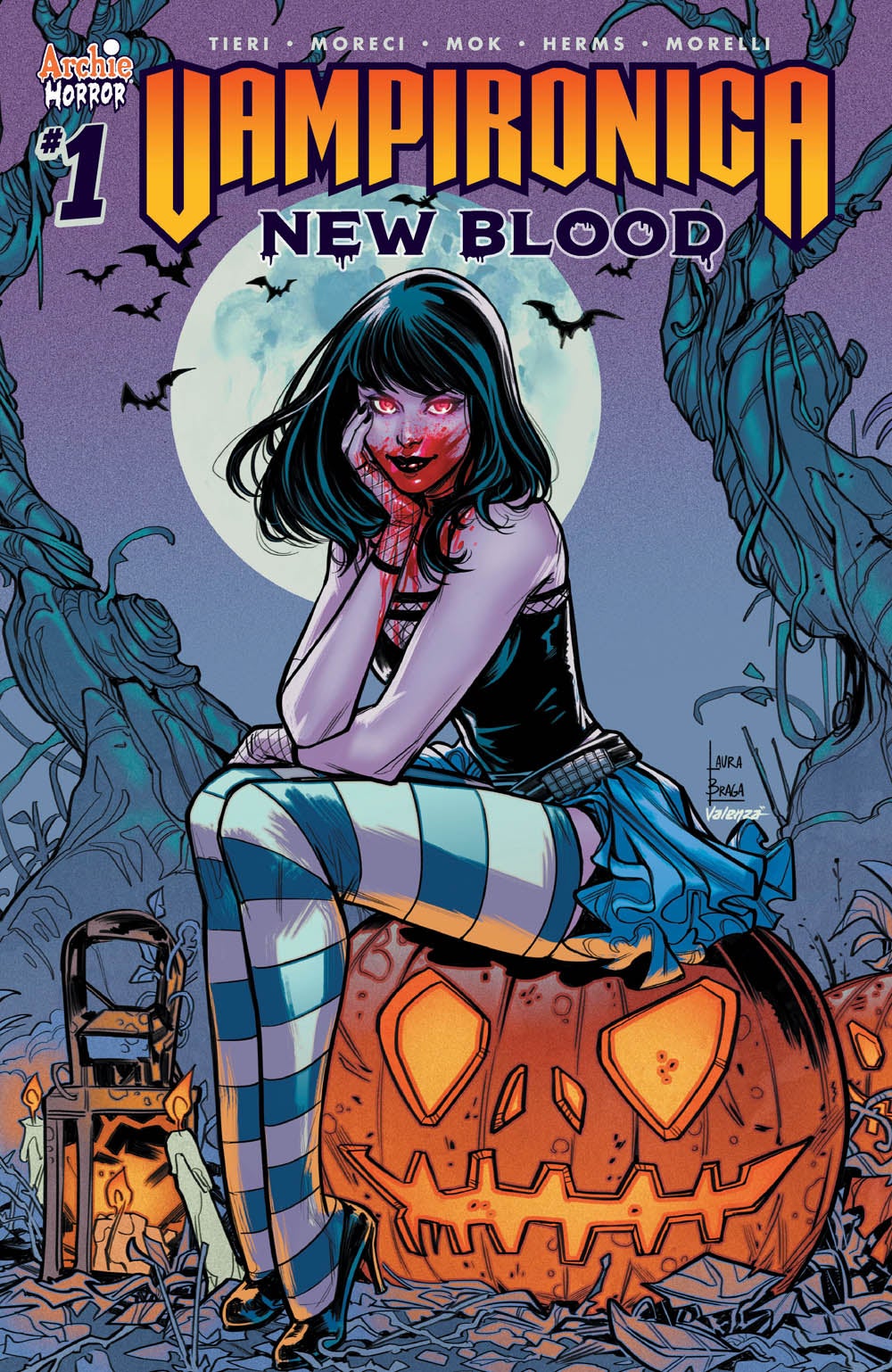 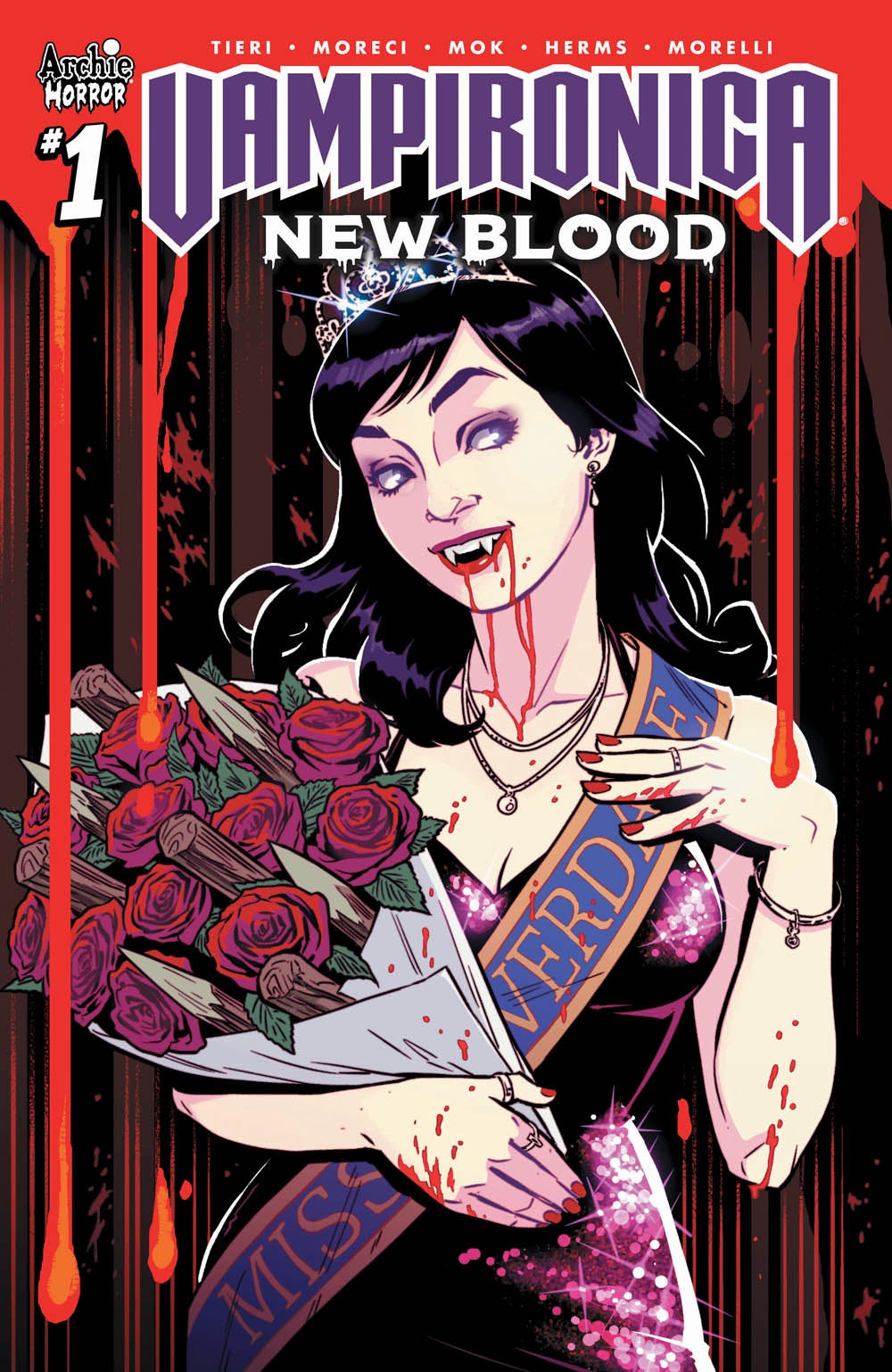 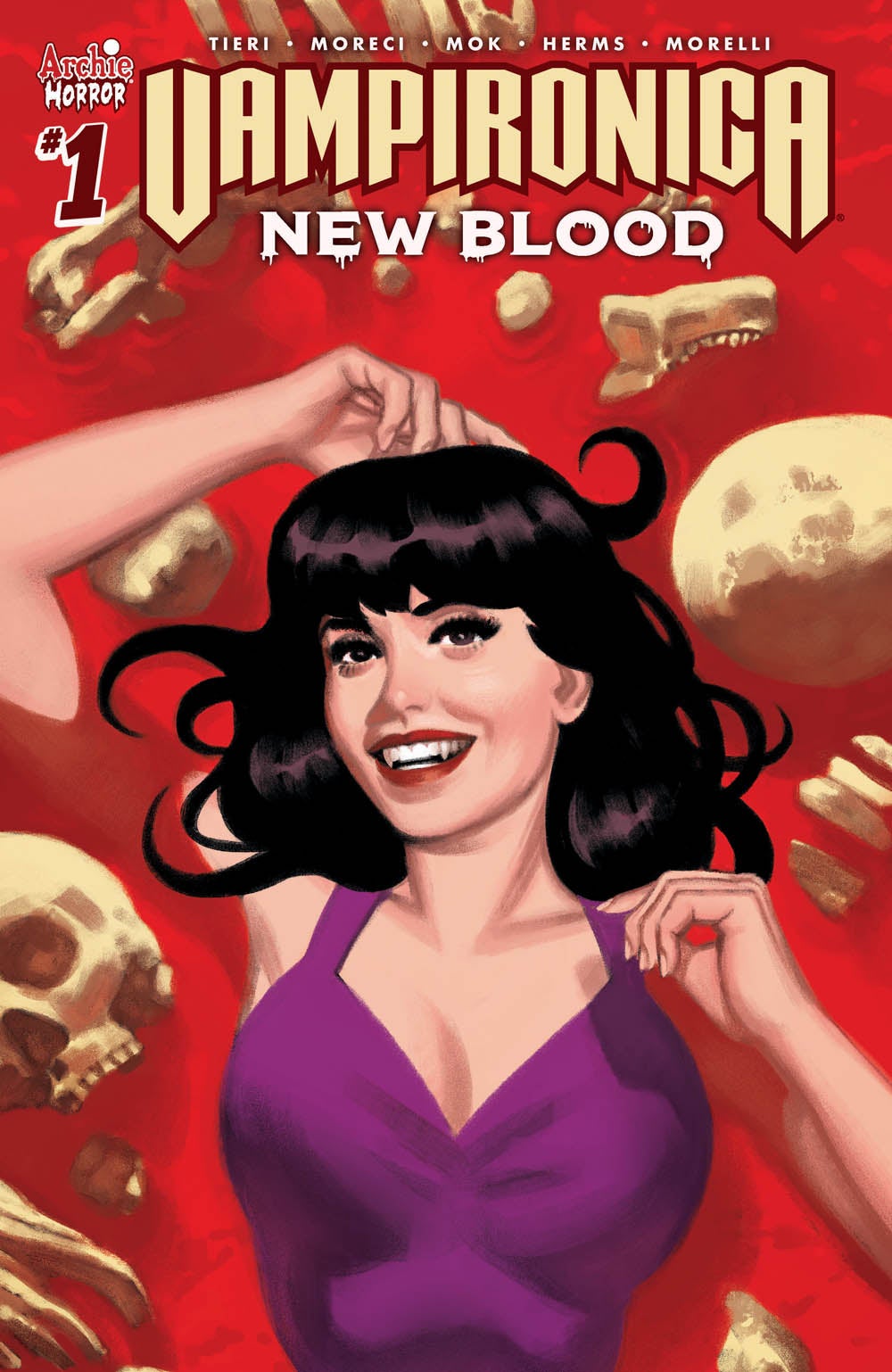 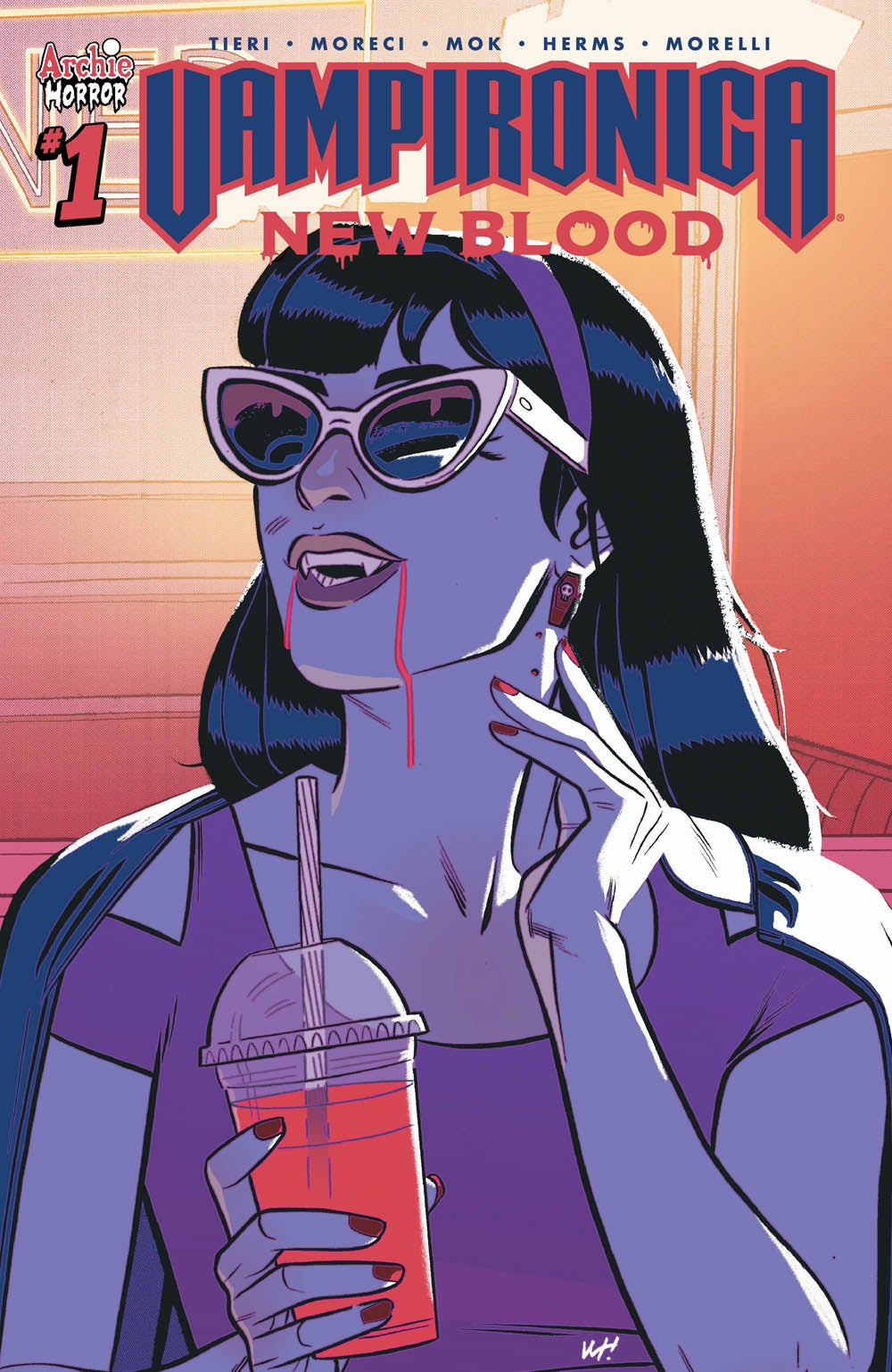 “And I’m thrilled to be joined by the partners in crime Archie has lined up on this book,” Tieri said of his process working with both Mok and Moreci on the series. “Mike has been a joy to collaborate with and he’s brought some great energy and ideas to the table. He’s much more organised than I am, which certainly helps!

We’re all marvelling at the pages Audrey keeps handing in ” whether it was scenes where Vampironica explores her history or it’s just plain good ol’ vampires beating the hell out of other vampires, she’s certainly brought her “˜A’ game. The whole team really has and I hope fans can see that and have as much fun with the book as we’re having putting it together.”

“Working on an Archie horror title is a tremendous privilege,” Moreci concluded. “Sabrina, The Hunger, and Afterlife are all terrific comics, and we’re out to craft something just as special. Luckily, we’ve got a great team ” writing with Frank has been fantastic, and we’re both really excited about our work here. And you can’t ask for better than Audrey, who’s as talented as they come.”

As Tieri concluded himself, with his own vampire punnery: “It’s really going to be a fangtastic time.”

Indeed. The stakes are raised for Veronica when Vampironica: New Blood #1 hits shelves on December 4.