Darth Vader’s Hunt For The Past Just Got Tragically Complex

Darth Vader’s latest ongoing comic series has seen the Dark Lord of the Sith, burned by his son’s rather literal exit from his life in Cloud City, angry and on a quest to find vengeance for the present his unfortunate past has wrought him. That quest has an unlikely new ally, and it’s only going to lead to heartbreak for Vader and his new… associate.

Greg Pak, Raffaele Ienco, Neeraj Menon, and Joe Caramagna’s debut issue ended with a bit of a shock for Vader. After spending the issue mad at his past, he was seemingly confronted with an impossible fragment of it when his mission to uncover just who hid the birth of his son and the final moments of his wife from him took him to the planet Vendaxa: Padmé Amidala, older, wiser, angrier, and blaster held high, seemingly standing right in front of him.

Of course, we the audience know this is an impossibility, as does Vader himself. From the moment of his birth as the cyborg monstrosity he became on Mustafar, no longer simply just Anakin Skywalker, Vader has known that his wife is dead. But that is a logic that the shock of this moment can’t afford to give Vader, and with a flicker of that Skywalker rage burning within him, he begins to recreate his final tragic encounter with his wife with this mysterious new woman. For a man so desperate to lash out at his past, this raw, emotional take on Vader sure isn’t afraid to just keep repeating it. But this time, Vader doesn’t go as far as he did with Padmé, allowing this ghost from his past to temporarily slip away from both Vader and the Vendaxan wildlife that had been haranguing her and her fallen men.

It’s not long, however, before Vader catches up and gets the answer he had sought to wrench out of his quarry”partially out of admittance, partially from his own realisation. This woman can’t be Padmé. But she can be her double: a Queen’s Shadow, the trusted handmaidens of Naboo’s elected queen.

This in and of itself is fascinating, but it’s made more so by the fact that this particular handmaiden is a very important one: Sabé. Played by Keira Knightley in The Phantom Menace, Sabé is the member of Padmé’s handmaidens who took on the Queen’s identity for much of the movie, and in E.K. Johnston’s excellent novel Queen’s Shadow, we got to explore her intimate relationship with the woman whose identity she must embody as her highest duty, and the personal complexities that come with such a life.

But it’s not just Sabé’s appearance here that is fascinating, within the context of exploring what became of Naboo and the people in Padmé’s life beyond Anakin with the rise of the Empire. It’s what Vader does upon realising who Sabé is, and why she is on Vendaxa in the first place: She wants the same answers he does about Padmé’s fate. And so, as the panels of Darth Vader #2 continue to blur back between the present and his literally red-tinted past with Padmé, Anakin Skywalker lies. 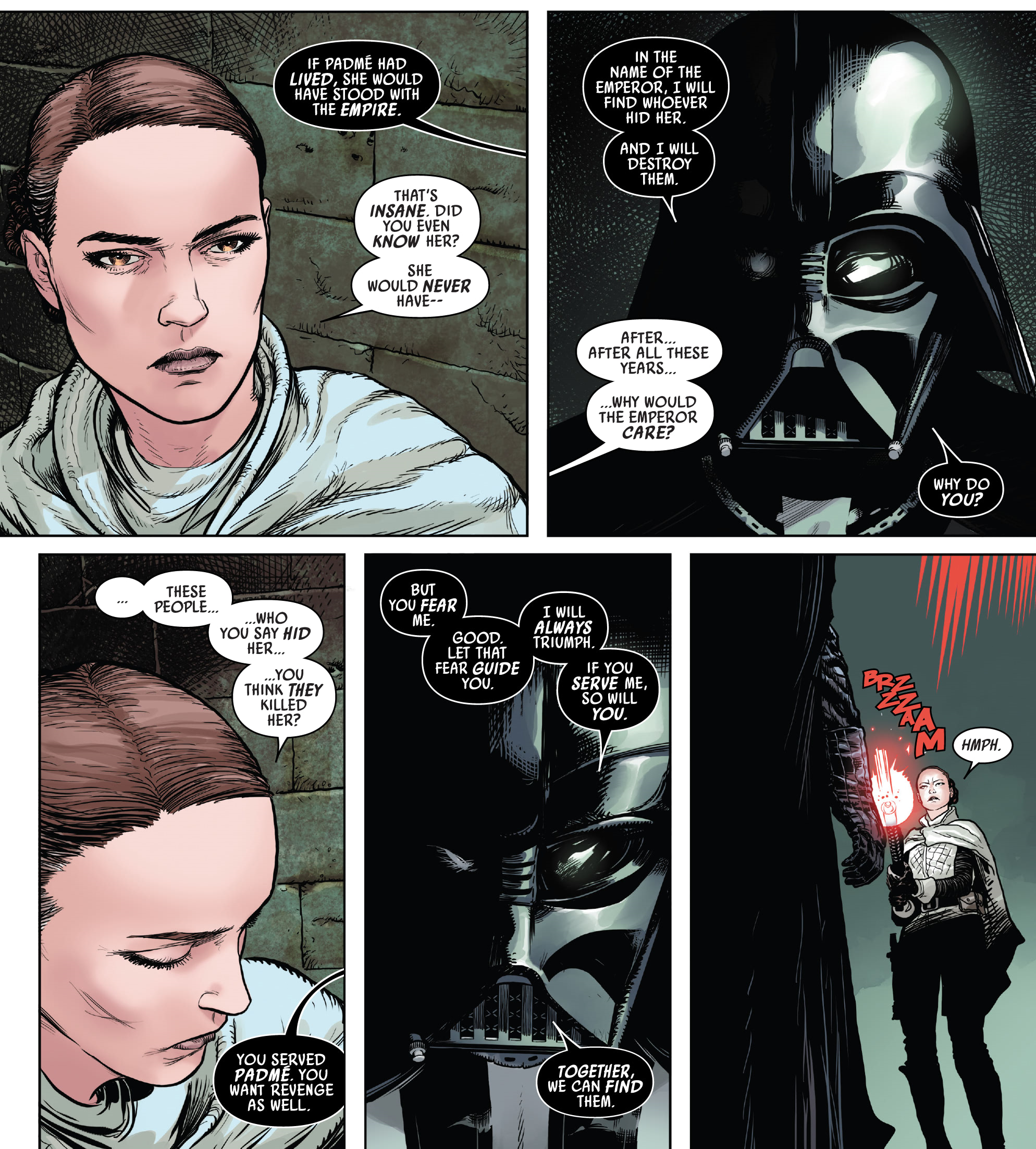 It’s a half-lie, at most”at least to us. Vader only knows that his wife died and that she was hidden away from him, information parcelled out by his new master, from a certain point of view, to hide his manipulations of the events that led to her and Anakin’s downfall on Mustafar alike. But the truth he knows himself, not as Vader but as the man beneath the mask, is what convinces Sabé to work with him: They’re both angry. They both want to lash out. They both miss Padmé and want answers as to why she was taken from them.

In the end, as the new duo fight their way back to Vader’s shuttle and the past and present continue to blur for Vader and Sabé alike, the latter reveals a painful new clue to the Dark Lord. The answers they both seek lie on Naboo”not just because of the tapes recovered by Sabé from Padmé’s Coruscanti apartment that led to Vader to Vendaxa in the first place, but lying in rest with the fallen Queen herself. Through the publisher’s work with Darth Vader as a character, it is perhaps Marvel more than any other current creative force in the galaxy far, far away”the journey of a certain Togruta notwithstanding”that has done the greatest job of more deeply enmeshing the original Star Wars trilogy with the prequel saga.

So far, that’s primarily been about the way this universe slipped from one era to another, but it’s also been about attempting to reconcile the duality of Darth Vader, and the fallen Jedi Knight lying scarred beneath his terrifying cybernetic surface.

In this latest series, it’s doing so again”but in a way that is inevitably going to get much messier and more emotionally complex than either Vader or his new ally could perhaps have ever predicted.