Ta-Nehisi Coates’ current run on Black PantherÂ thrust the nation of Wakanda into the far reaches of space and turned T’Challa into a resistance fighter in the midst of an epic war, the likes of which no one on Earth had ever witnessed. With the help of allies new and old, T’Challa has become the focal point of a revolution aimed at tearing down an oppressive empire that’s enslaved billions in the name of the Intergalactic Empire of Wakanda.

When the Empire was first introduced in Black Panther, it seemed very much like it was a vision of Wakanda’s future”a sprawling of collection of colonised planets all defined by the nation’s iconic vibranium-powered tech. As Coates’ run continued, though, a seemingly amnesiac T’Challa came to realise that the Empire was not from the future proper, but rather the past, as it was founded by a group of present-day Wakandans who were flung back through time while searching through space for the origin of Earth’s deposit of vibranium.

After becoming stranded 2,000 years in the past on a distant planet, the lost Wakandans did what Wakandans have always done: They survived, then thrived, and in time began to build new lives for themselves. But unlike the Wakandans of Earth who made a point of isolating themselves from outsiders, the Wakandan Empire became a superpower specifically because of its willingness to subjugate any and every sentient race it came across through force and by robbing them of their memories.

Though the Empire’s power came from its ability to make people forget who they are, what’s become clear over the course of Black Panther‘s recent arcs is how forgetting their roots on Earth led to the Wakandans becoming the kind of warmongering people their ancestors hoped to never become again after the original Wakanda was first unified. As T’Challa’s memories have come back to him, he’s gained an even deeper appreciation for the power that being able to recall one’s past has, regardless of whether you’re a king or a soldier whose life those in positions of power see as expendable.

Being able to remember his life gave T’Challa that much more resolve to take the Empire down and return to his loved ones on Earth, but at the same time it forced him to confront the reality that this entire experience has changed him and reaffirmed something powerful and difficult about himself that he’s always had difficulty accepting. His love for his home country runs deep, but unlike the Black Panthers who came before him, his life’s been shaped by an unshakable wanderlust and a draw to superheroism out and about in the larger world. And his undying love for Ororo Munroe actually plays a significant role in how he begins to recall his past life”in a way, it also reflects the love he has for the Earth itself. But at the same time, he can’t deny that he immediately felt compelled to join the anti-Empire rebels and fight in their war without question, suggesting that his compulsion to play hero out in space was just as strong as his love for Earth’s Wakanda. 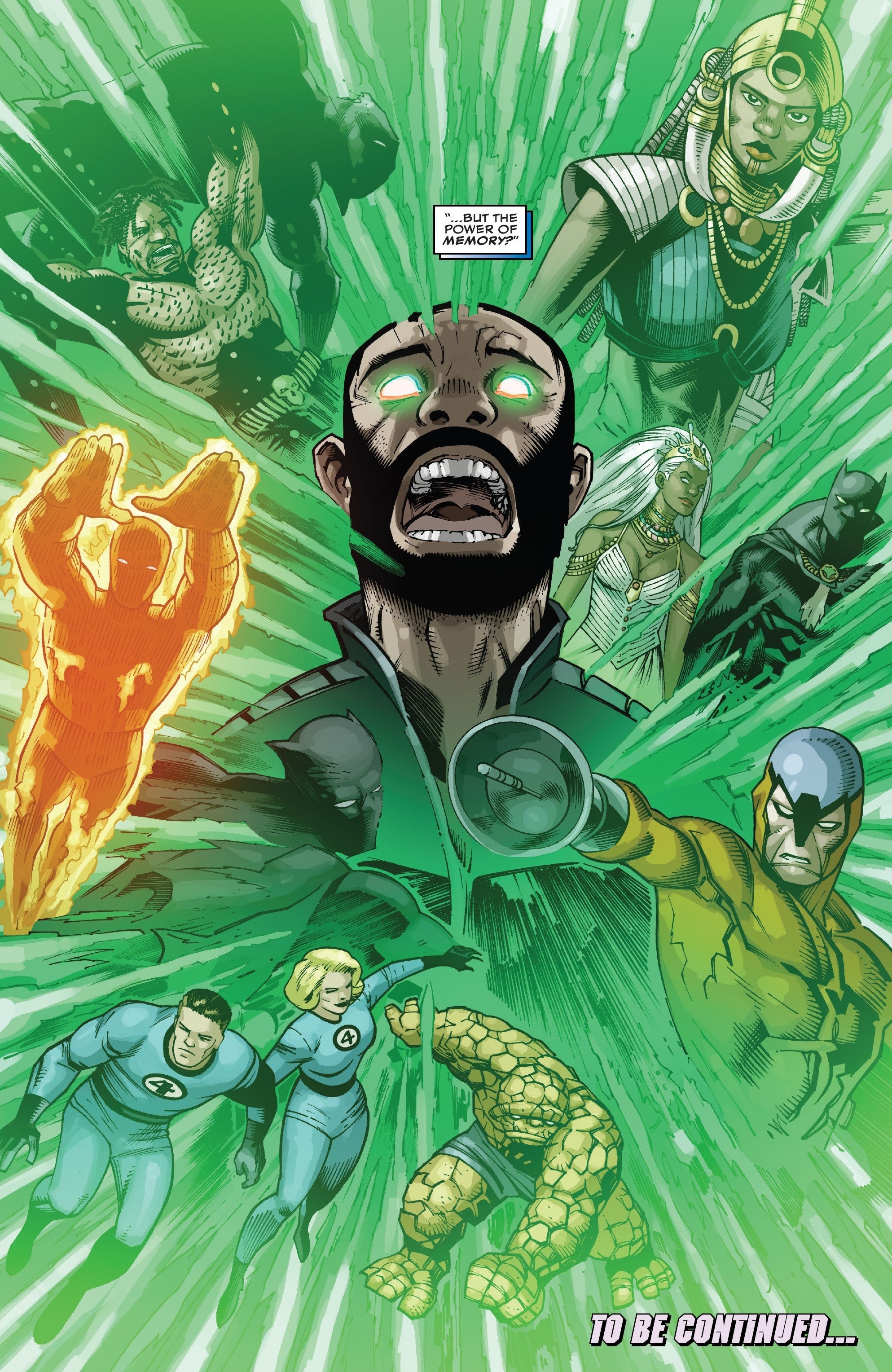 Even more devastating, perhaps, was that when T’Challa finally managed to re-establish communication between his fellow freedom fighters and Earth’s Wakanda, he learned his home country was able to prosper in his absence even though he was taught to believe that Wakanda would always need its Black Panther. While running off the play superhero with the Avengers and the members of the Illuminati has been one of T’Challa’s favourite pasttimes, he’s always returned to Wakanda and tried to be the kind of ruler who would make his family proud. But seeing the country continuing to thrive in his absence makes it that much more difficult for him to believe he has to sit on the throne, especially with the whole of the Empire posing a legitimate threat to the entire galaxy.

Interestingly, at the same time that T’Challa’s been struggling to find his place in the world, both his stepmother and sister firmly believe that Wakanda does need its king in these trying times. Since he’s been able to make it back to Earth ahead of confronting the Empire’s forces, they’ve pushed him to take stock of his life and reflect on the legacies of other Black Panthers. Shuri loves T’Challa and everything he stands for, but she knows just as well as he does how powerful his drive to run off is”something that’s only become stronger now that he’s lived an entirely new life and forged new bonds with his fellow warriors”and it devastates him to be pointedly told as much. 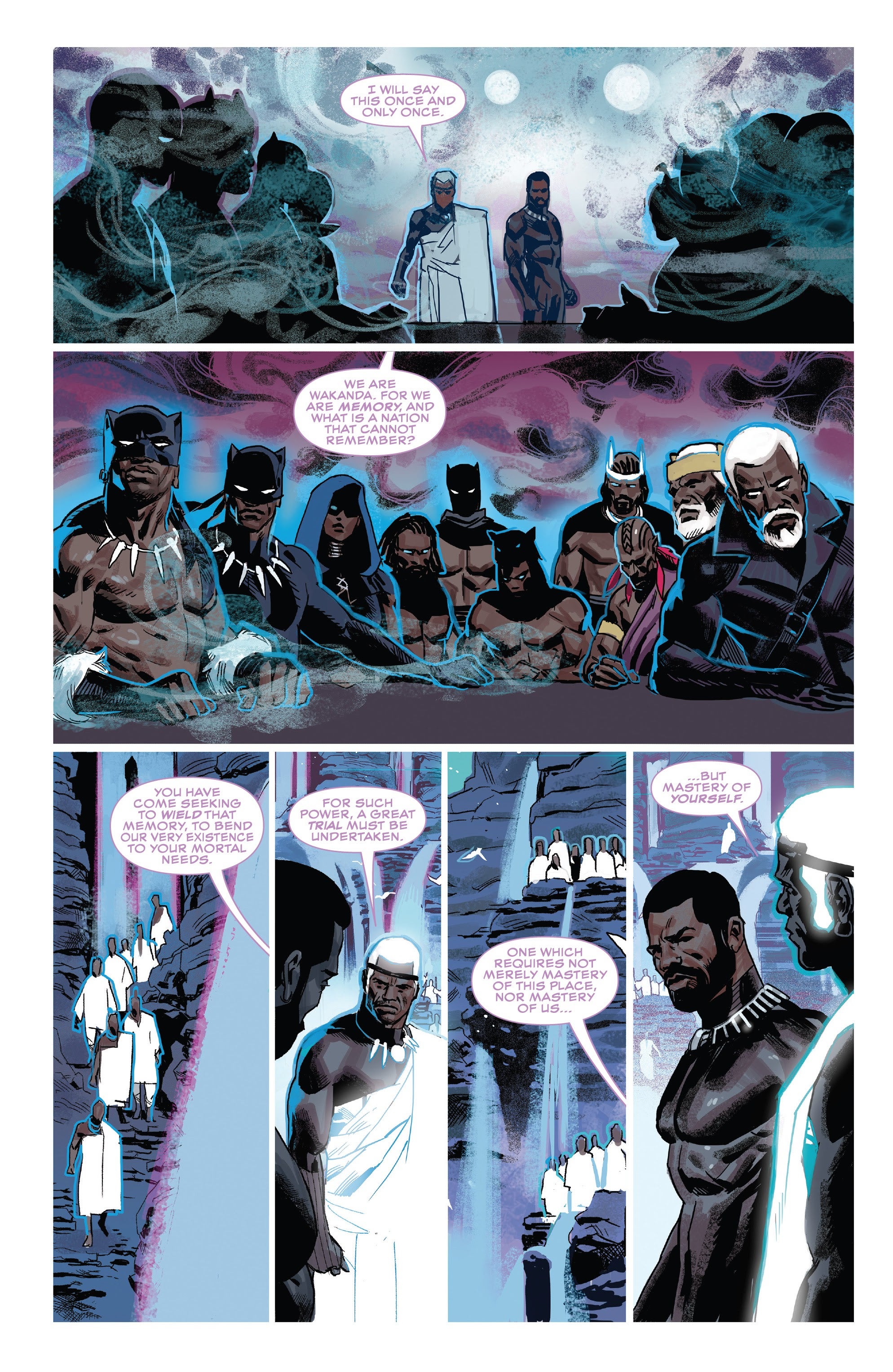 It’s only after T’Challa travels to the spiritual plane to confer with his ancestors and be presented with the memories of his past failures that he finally comes to accept that regardless of his personal desires, he is still Wakanda’s king with a responsibility to protect his people. In earning the trust and allegiance of the other Black Panthers, he managed to do something that the panther goddess Bast could not: tap into the vast energies of the spiritual plane to restore the memories of every single slave living under the Empire’s control.

For all of Wakanda’s technological might and vibranium, the nation’s collective memory has always been its most valuable resource”because understanding the past was key to navigating through the present and into the future. With just a handful of issues in this run left, it’s still unclear just how T’Challa and his newly restored allies across the galaxy will be able to strike the Empire down, but now that he’s resolved to step up to the plate and do what kings do, the Empire’s going to have one hell of a fight on its hands.