Shuri’s New Series Is A Seamless, Promising Mix Of Her Comic And Movie Selves

Over the past decade, bits and bobs of the Marvel movieverse have found their way back into the comics. Sometimes it works, sometimes it feels like an awkward mandate. But Shuri’s new comic manages to marry the best of both movie and comic worlds while making that blending a core arc for the Wakandan princess.

If you’re only aware of Shuri thanks to Letitia Wright’s breakout performance as the whiz-kid teen sister to T’Challa in Black Panther earlier this year, from the moment Shuri #1 (by Nnedi Okorafor, Leonardo Romero, Jordie Bellaire and Joe Sabino) begins, it is almost instantly familiar.

From an artistic point of view, Romero’s bold linework borrows just the right amount of influence and inspiration from Black Panther’s aesthetic and design so that, albeit in a stylised form, it is easy to see Wright’s version of Shuri — or Angela Bassett’s Ramonda, or Danai Gurira’s Okoye, to name a few more — immediately on the page. 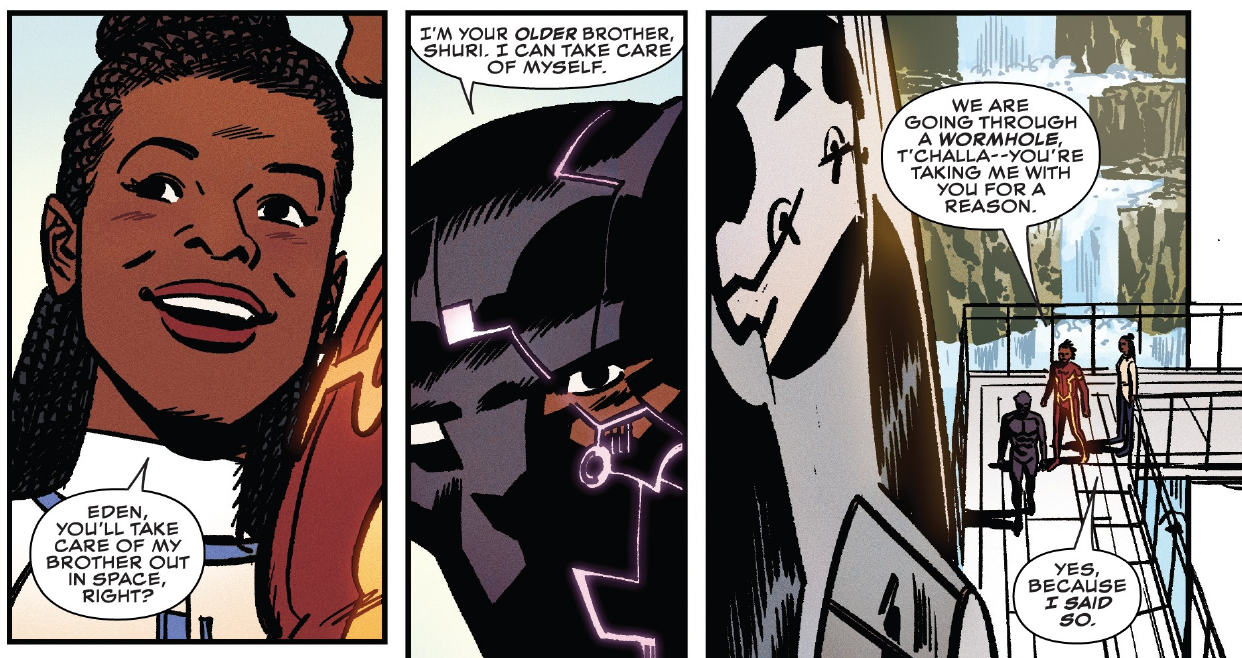 But Okorafor’s initial framing of Shuri also brings the warmth and earnest brightness that made her so quickly beloved in the film to the foreground. She isn’t a kid any more, but this Shuri is still energetic and compassionate about her technological work, and cares deeply for older brother.

These passions are intertwined in the opening of the issue, as we see T’Challa off to kickstart the Wakandan Space Program in a ship of Shuri’s own design (the eventual ramifications of which we’re currently seeing play out in Ta-Nehisi Coates and Daniel Acuña’s cosmic-bound Black Panther book).

As the weeks pass following T’Challa’s launch into the cosmos with no sign of his return, Shuri brings forth the other aspects of the character, this time rooted in her long and complex backstory within the comics.

She’s been the Black Panther, of course, during prior times her brother has stepped away from the role. She’s also died as the Black Panther, defending Wakanda from Thanos’ Black Order — something we are reminded of at the very beginning of Shuri #1, almost as an acknowledgement that this is more than just a tie-in to the movie’s success.

More recently in Coates’ initial run on Black Panther, Shuri underwent another evolution in her return from the grave — undergoing a quest for knowledge in Wakanda’s spiritual plane of memory to earn the wisdom and knowledge of Wakanda’s finest past minds, becoming a being dubbed by those spirits as the Ancient Future.

And here, as Shuri’s concerns over her missing brother grow, these two legacies — the bright young scientist and the spiritual prophet — start clashing with each other, and we begin to see the true core of this new series.

Because really, Shuri’s first issue is about identity rather than simply trying to reconcile her movie and comics selves.

Shuri is, and has been, so many different things — a princess, a scientist, the Black Panther, the Ancient Future, a sister. But the demands that come with being all those things, and sometimes all those things at once, push and pull at her to the point she doesn’t really know how to cope with T’Challa’s disappearance, or even know who she really is, or wants to be.

In the weeks after T’Challa’s absence, Shuri coops herself up in her own lab, fiddling with wondrous bits of tech such as personal wings and Kimoyo spy tech, relishing in the satisfaction of invention as a way to drown out the spiritual call of the Wakandan ancestors now forever linked to her thoughts. 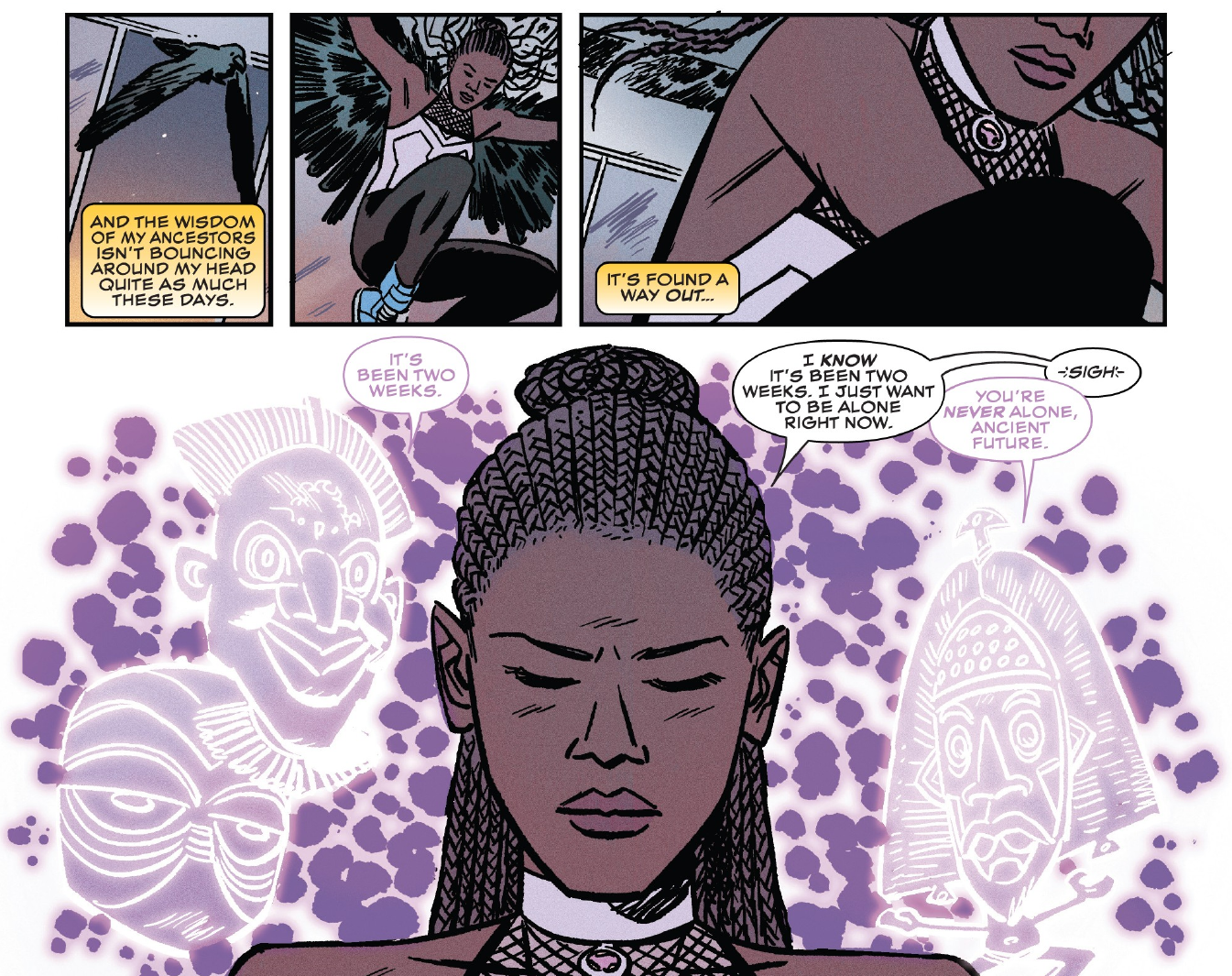 When their call gets too strong for even the rush of science to distract her, she turns to a wannabe hacker named Muti she’s befriended over instant messaging — another outlet away from her other roles, as Muti is one of the few people that doesn’t know of Shuri as the Princess of Wakanda, or as the amazing scientist, or as the Ancient Future, but simply as Shuri.

It’s a friendship where she can at least try to be herself instead of all these other destinies — destinies that, more often than not, have framed her within the context of T’Challa rather than as her own person — that have been thrust upon her. Even this first issue is framed as such, driven by the absence of T’Challa as much as it is about Shuri stepping into the spotlight of her own series.

As the issue comes to a close, another of these destinies is also once again put upon an unsuspecting Shuri, as she’s pulled away from her experiments by Ramonda to face the question she’s tried to run away from in the wake of T’Challa’s absence: In his stead, Wakanda needs a leader. Will she take the Black Panther mantle and lead once more? 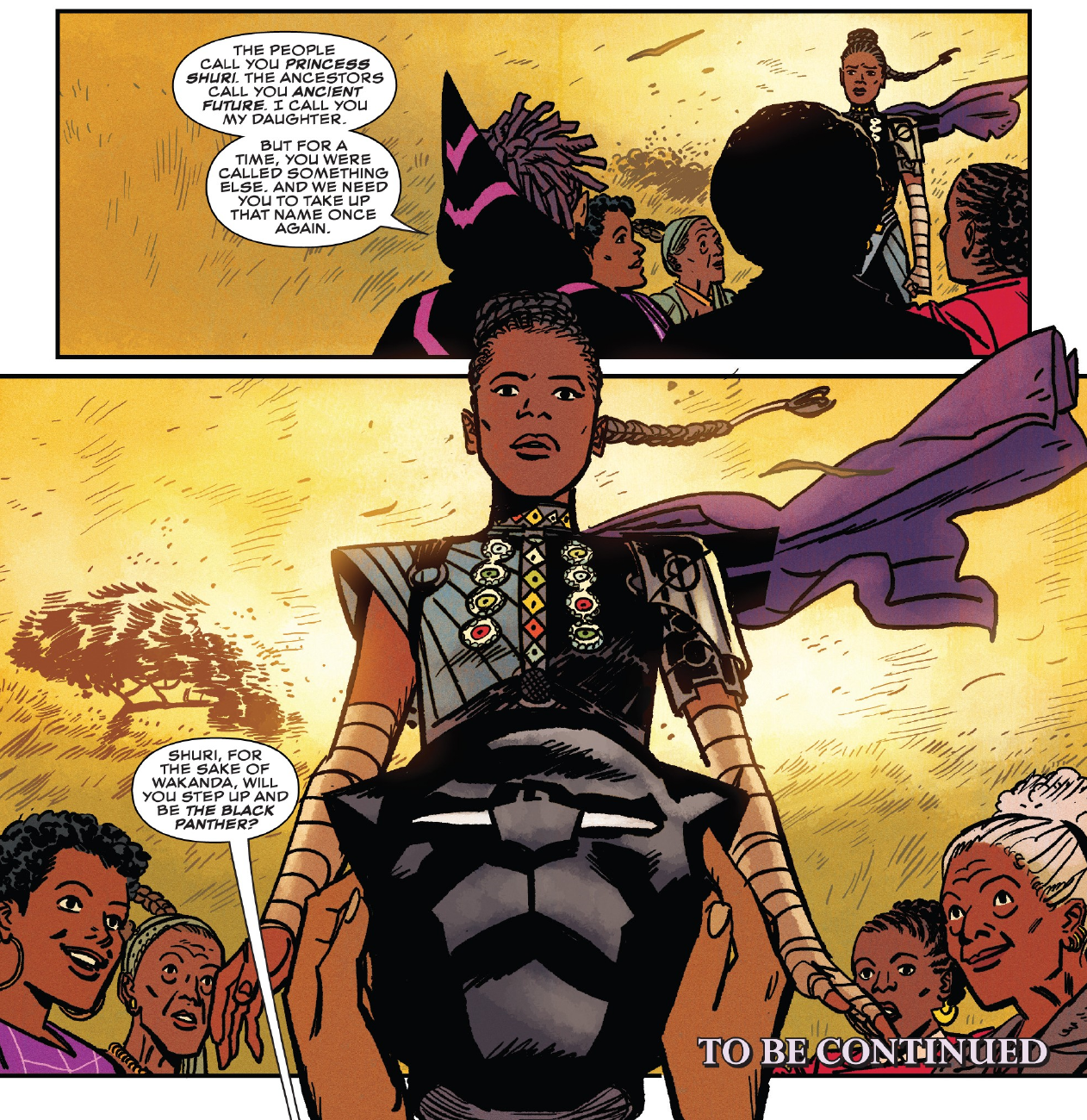 The uncertainty and unease on Shuri’s face in that closing moment are telling, and that’s the point — the heady intermingling of her complex comics history and the earnest, brilliant young mind we saw on the big screen that we see throughout this issue comes to represent a struggle for self within Shuri.

And it’s one that will seemingly drive this new series in some potentially very interesting ways, playing with her newfound recognition thanks to the Black Panther movie to dive deep on just who the character really is in her own mind, beneath all these titles and fates.

It’s a promising journey that I’m very eager to follow.