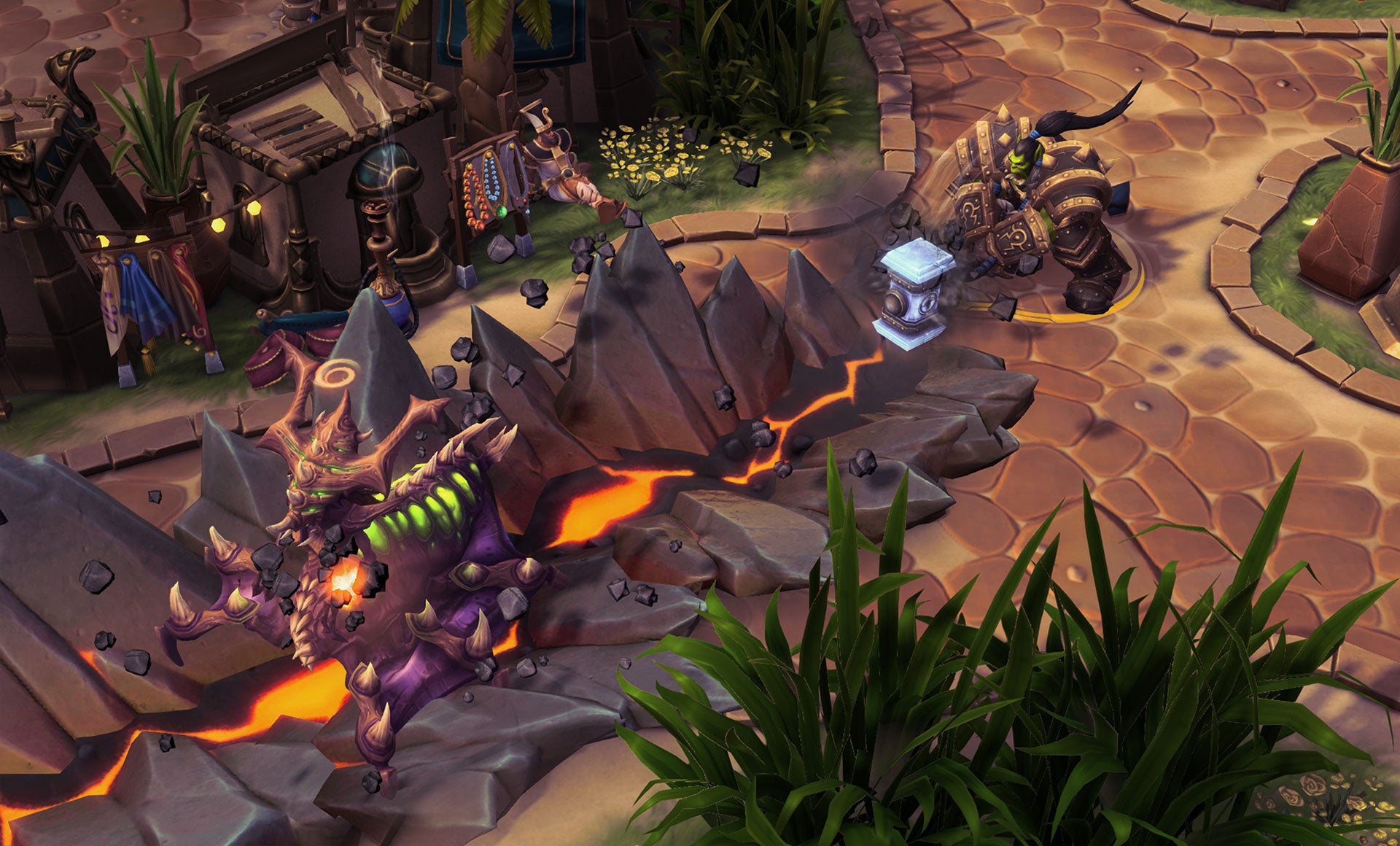 Heroes of the Storm is a really fun game. But playing it as a Warcraft veteran can hit a little too close to home.

It can be difficult to remember since World of Warcraft has been so popular for so long (it was first released in 2004), but the original Warcraft games that inspired Blizzard's iconic MMO were an entirely different beast. They started way back with Warcraft: Orcs & Humans in 1994, before the rockstar PC developer had ever released a Diablo or StarCraft game.

After Warcraft III and its corresponding expansion pack The Frozen Throne were released in 2003, Blizzard decided to take its legendary RTS series in a dramatically different direction. Instead of producing another boardgame-like isometric title about leading great armies of orcs, zombies, or elves into battle against one another, the developer turned its gaze towards making World of Warcraft, a multiplayer role-playing game linked to its predecessors by aesthetics and lore alone. As for any direct sequel to Warcraft III? Despite fans begging and pleading with Blizzard to keep the Warcraft RTS series going, they never did.

Looking back, Warcraft's transformation was a long time coming. Whenever Blizzard spoke about Warcraft III during its long development period, they'd mention wanting to inject more and more RPG-like elements into the game. The end result of their experiment was a game that combined traditional RTS-style activities like building bases and managing large diverse groups of units to attack and defend with unique "hero" characters. These heroes had distinct special abilities that let them, say, heal nearby soldiers, or take out a whole group of bad guys at once.

Ironically enough, MOBAs grew into a distinct genre precisely because of Warcraft III's innovations to the RTS template. The first real MOBA, Defence of the Ancients, was just a heavily modified version of Warcraft III. Dota's core objective — destroying the enemy base before they destroy yours — was still the same as Warcraft's. Its only difference was how you accomplished that. Instead of controlling tons of different units during battle, Dota put players in charge of a single hero character. And instead of constructing multiple different buildings that could then produce and upgrade units for your army, Dota automatically spawned foot soldiers and sent them charging across the map at regular intervals. It was like an RTS, only with much more action and far less micromanagement.

It's unnerving for a longtime Warcraft fan to boot up Heroes of the Storm and see someone like Thrall, the orc warchief Warcraft III opens on, or Uther, the holy paladin character who steers you through its early levels. For a point of comparison. this is WCIII-era Thrall: 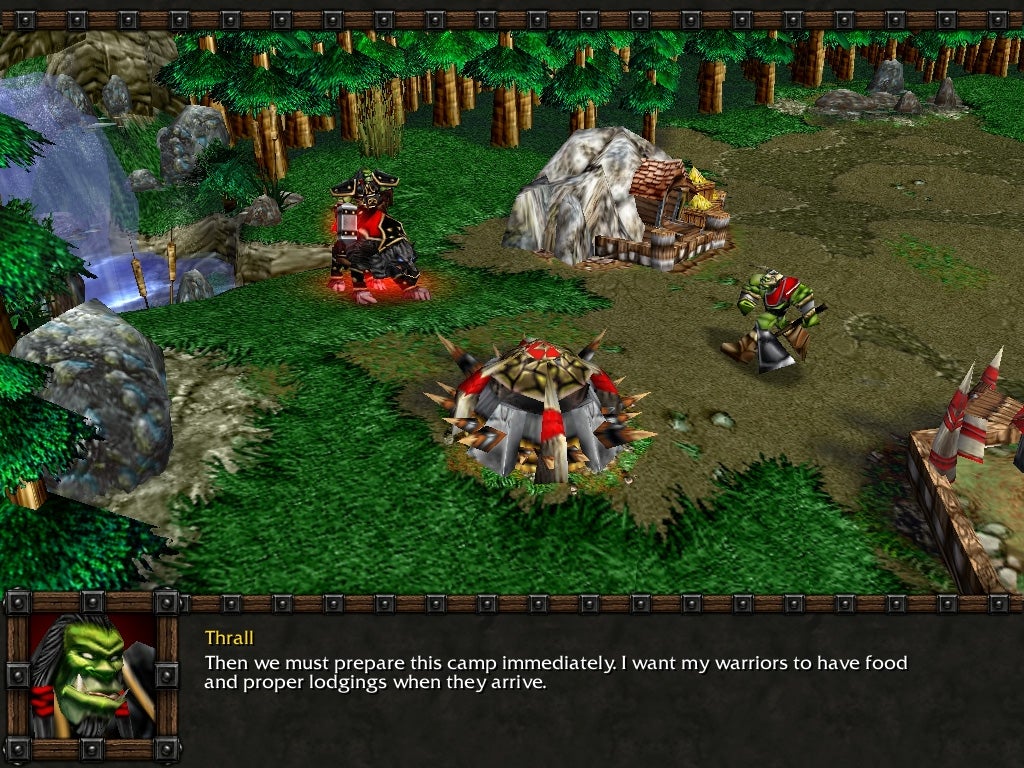 And here's the new-gen Thrall as he appears in a Heroes of the Storm today: 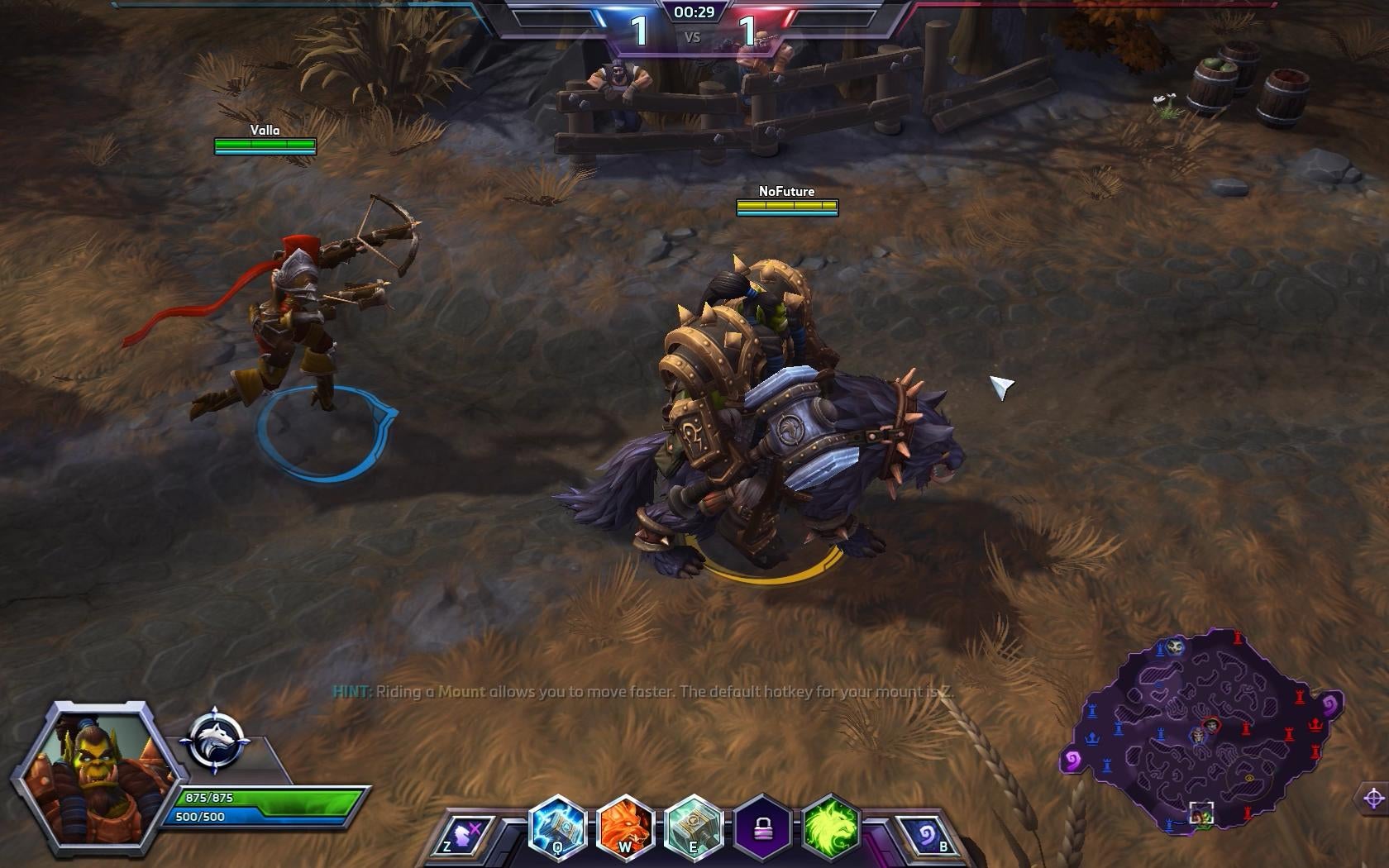 These are guys I've spent years waiting and hoping I'd get to see in action again. (Note: Thrall and Uther both make appearances in World of Warcraft, but it's not quite the same, is it?) A certain generation of PC gamers primarily knows them as they appear in the original Warcraft series: tiny, toy-like warriors you could control as they did their best to muster their forces and assemble defences against an oncoming scourge of undead monsters.

The first time I played a Heroes of the Storm match as Thrall and cast his chain lightning spell on a group of enemy minions nearby, I was struck with an overwhelming wave of nostalgia. It's the same exact spell he could cast in Warcraft III. Were it not for being a MOBA as opposed to an RTS, he'd practically be identical. Thrall even jokes about being back in an isometric game after all these years if you right-click on him enough times that, in true Blizzard fashion, he starts saying silly stuff. The main difference between now and 13 years ago is that the warchief looks a lot spiffier dressed up in modern PC graphics. 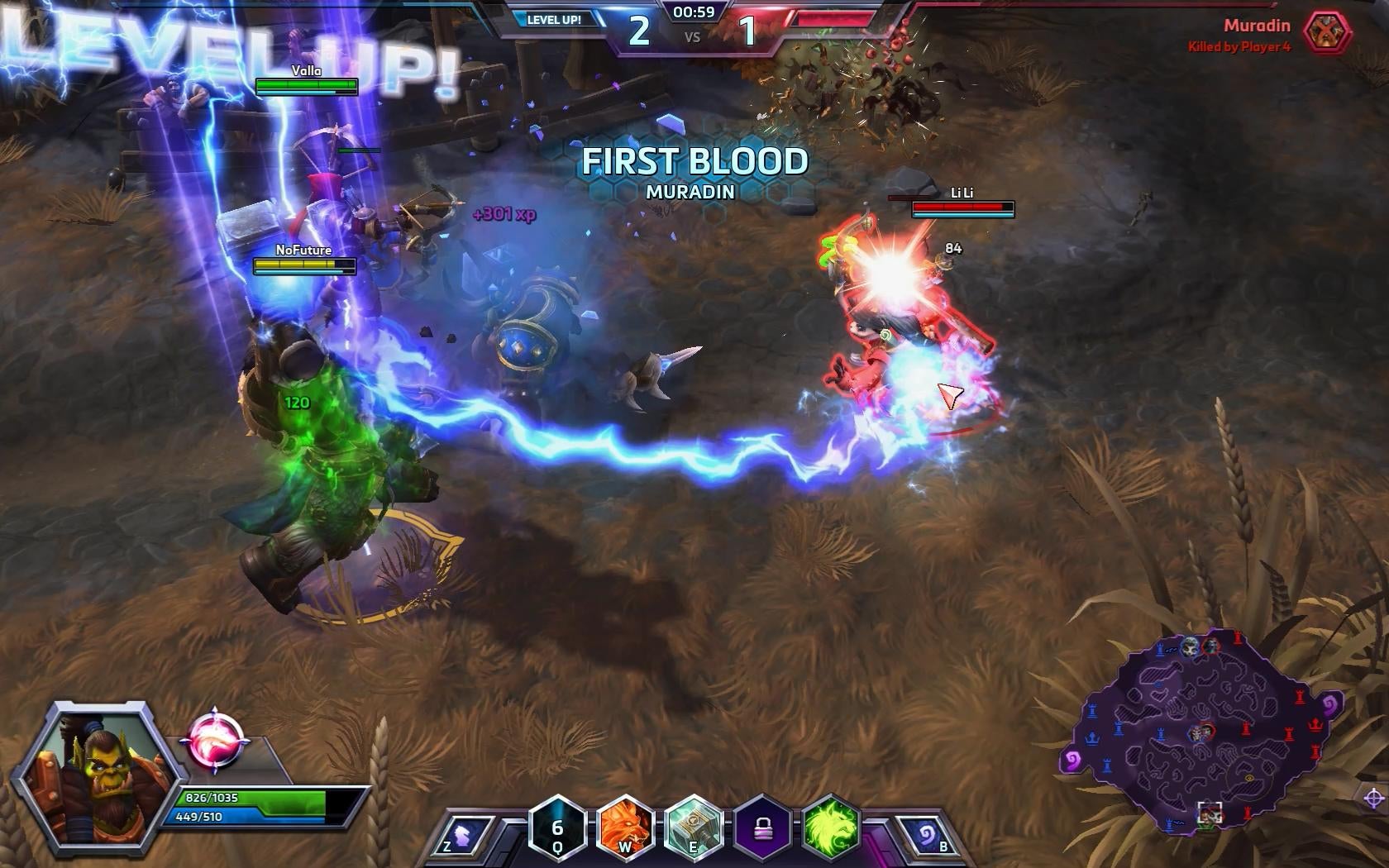 Heroes of the Storm is a solid game. But a large part of me also wants to see Thrall and his Warcraft compatriots back in their real isometric environment — in a new Warcraft real-time strategy game.

The question, of course, is: would a new Warcraft RTS actually work? That's a legitimate concern. League of Legends and Dota 2 became ridiculously successful games by stripping away many of Warcraft III's RTS elements (base-building, unit management) so players were left with individual hero units to control and little else. It's easy to see why these changes helped League and Dota surpass their predecessors in popularity: they refocused gameplay squarely on fast-paced combat over the complex economic micromanagement required to play an RTS, making the games more exciting and easier to understand for casual players the world over.

A couple important things were lost in the evolution from RTS to MOBA, though. While RTS games can be played a bunch of different ways, MOBAs are team-based games that can really only be played on very specific types of maps in online multiplayer. This means there's no single-player mode in a game like Heroes of the Storm. And there's also no room for a game to have a legitimate story as a result.

Warcraft III has a strong legacy in the many games it inspired, and the new hybrid genre it helped create. But if I look back at the game itself, it's the single-player campaign that really stood out to me. The hero characters in Warcraft III were an ingenious way to wed the game's epic storyline with the moment-to-moment nuances and intricacies of actually playing the game, constructing buildings and marshaling your forces to defend or attack. Playing as Prince Arthas as he struggled to maintain control of his dwindling forces during the first act of Warcraft III, I really felt like I was some beleaguered commander losing his grip — both on his strategic position and his sanity. Struggling to hold off the burning legion as the night elves in the game's calamitous final missions hammered home the message that yes, you really were fighting over the fate of the world. That was the real beauty of Warcraft III: the way its methodical and tense strategic gameplay reinforced the exhilarating highs and dispiriting lows of its story. 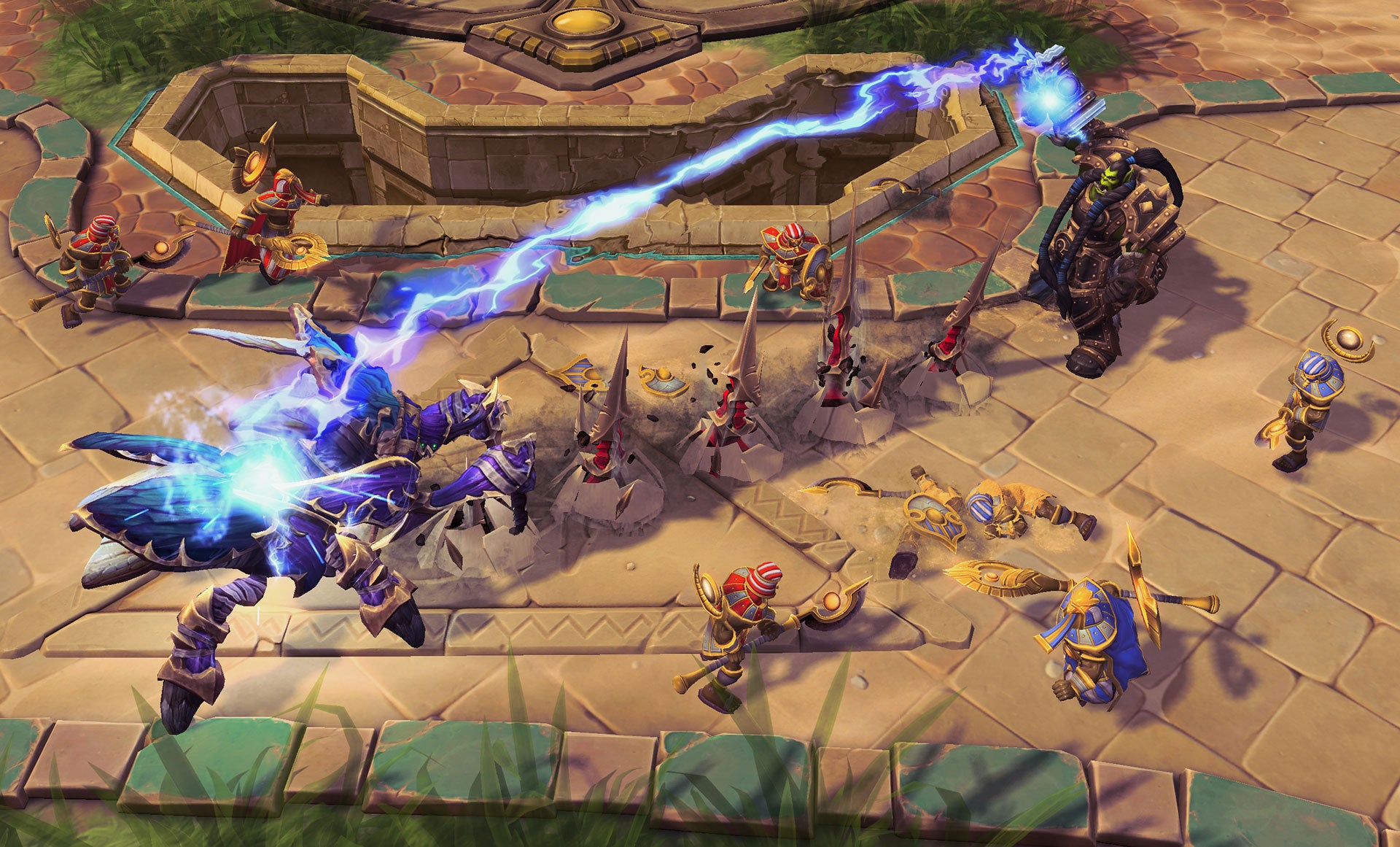 There aren't really moments like that in Heroes of the Storm. This is partly because HOTS is an unabashedly silly melting pot of a game that throws together characters from Blizzard's assorted fantasy and sci-fi universes. But MOBAs aren't great storytelling vehicles in the first place either. Instead of letting you play through Arthas' disturbing fall from grace and his eventual betrayal of his fellow humans, HOTS just gives you the ending of this tragic tale: King Arthas, the undead lich king. You don't see Arthas as he was at the beginning of Warcraft III — a fresh-faced prince eager to impress his father and prove that he could some day become king. You just see the villain he's turned into by the end of the game. There isn't really room for complex personal drama and character progression in a tightly-framed team-vs.-team match that will probably be over in 20 or 30 minutes.

Before Heroes of the Storm even came out, Blizzard making a MOBA seemed like an inevitability given the company's history making top-down PC games like Diablo, StarCraft, and Warcraft — i.e. the games that first inspired people to create MOBAs. It's odd to consider Warcraft as the one game that no longer really fits into the mould.

Warcraft fans like me who've picked up the game are seeing characters like Arthas and Thrall the way we've not-so-secretly wanted to see them again for more than a decade. So I have to wonder: since Blizzard already went through the trouble of making all these intricately-crafted Warcraft heroes to drop them into HOTS, would it really be too much trouble to bring them together again in another Warcraft strategy game? MOBAs only came into existence because a group of passionate Warcraft fans cracked the game open and started messing around with its insides. Can't it work the other way around too?