These days, people think of Naughty Dog as the company behind the Uncharted series, but it didn’t start that way. The company’s first game was a swords ‘n sorcery RPG called Keef The Thief, published by Electronic Arts. Naughty Dog has changed directions quite a few times throughout its history. It used to be known for colourful platformers like Crash Bandicoot and Jak & Daxter, but it goes back even further. Jason Rubin and Andy Gavin co-founded a studio called JAM Software in 1984, renaming it Naughty Dog in 1989. The first game published under that banner was Keef the Thief. 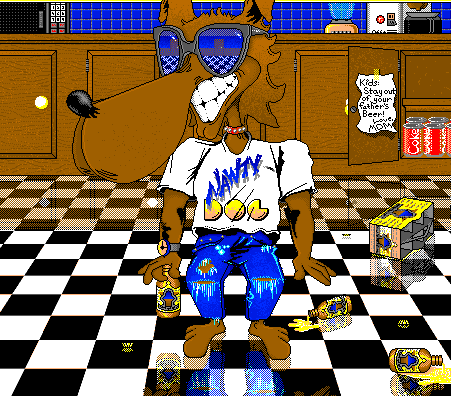 Starting with Dream Zone, which sold 10,000 copies, Rubin and Gavin started working on a series of RPGs. They were only 16-years-old at the time, and it got them a deal with Electronic Arts.

After Dream Zone, there was Keef the Thief and Rings of Power. Keef the Thief, however, marked the moment when JAM Software became Naughty Dog.

Play Keef the Thief, a promising young thief who finds himself on the outskirts of the Mercon the Merchant City. Considering the penalty of thievery is the removal of certain body parts, our young hero must be careful in his profession and ultimately (among others) train himself to access and steal from the city treasury.

Keef the Thief: A Boy and His Lockpick is a first-person perspective role-playing game. It has elements of parody, clearly identifiable from various descriptions in the game and enemy names during combat. One of the goals in the game is to steal everything in sight – at least in the city. The game map itself includes, beside the city, various dungeons, jungles, and an arena, among others.

It was pretty similar to a lot of other RPGs at the time. You slowly walked through dungeons and fought stuff. It was a solid, if unremarkable, RPG.

The story of how they got the game made is pretty remarkable, though.

“We cold called the help line at Electronic Arts, which was at that time the largest game publisher in the world,” said Rubin in an interview for the book Gamers at Work, “and managed to get a producer on the other end of the phone. A few months later, we were working for EA on Keef the Thief, another graphic adventure for the same systems. Frankly, I still don’t know how we pulled that off. It would be the equivalent today of a kid who has a half-million views on YouTube cold calling Warner Brothers and getting a movie deal.”

If nothing else, Keef the Thief had one hell of an intro song:

If you’re interested in seeing how the gameplay works, here’s a video:

Amiga Magazine Rack has a bunch of scans from the era, which includes a handful of reviews for Keef The Thief. Though critical consensus seemed to run the gamut, people could agree on one thing: the game was hard as hell.

This review by Judity Kilbury-Cobb in Info 30 from 1990 made me chuckle, especially the last paragraph:

I have never been a teenage boy but I can see well enough why one would go ga-ga over this game. Loaded with action, adventure, humour, and Sex Objects, Keef the Thief‘s mission is to survive, conquer the world, and become Teenage God-King. In that order. As Keef, you survive by exploring the towns, dungeons, and jungles of the Tri-City area and stealing anything that isn’t nailed down or booby-trapped.

This is a wacky, wacky game. The artwork is terrific. The prose, written by Iowa City native Mike Humes, is very funny, if you like sophomoric humour. The high-energy sound track is very listenable. Keef features a unique point and click interface. My only complaint is with the combat mode; the view is unnecessarily narrow and the movement un-intuitive.

The perspective and concept of Keef the Thief are aimed squarely at adolescent males. (I don’t mean merely teenagers, either.) I wish there were such games written for the female point of view; girls like thieving and adventuring, too, you know. Keef the Thief is rowdy and raunchy adventuring at its best.

Both Gavin and Rubin eventually left the studio they’d founded in 2004. Given the stellar reaction to Uncharted 4: A Thief’s End, it seems like the future remains bright for Naughty Dog.

Maybe don’t count on a Keef The Thief reboot any time soon, though.