World Of Warcraft Expansions Revisited: Lich King It's Cold Outside 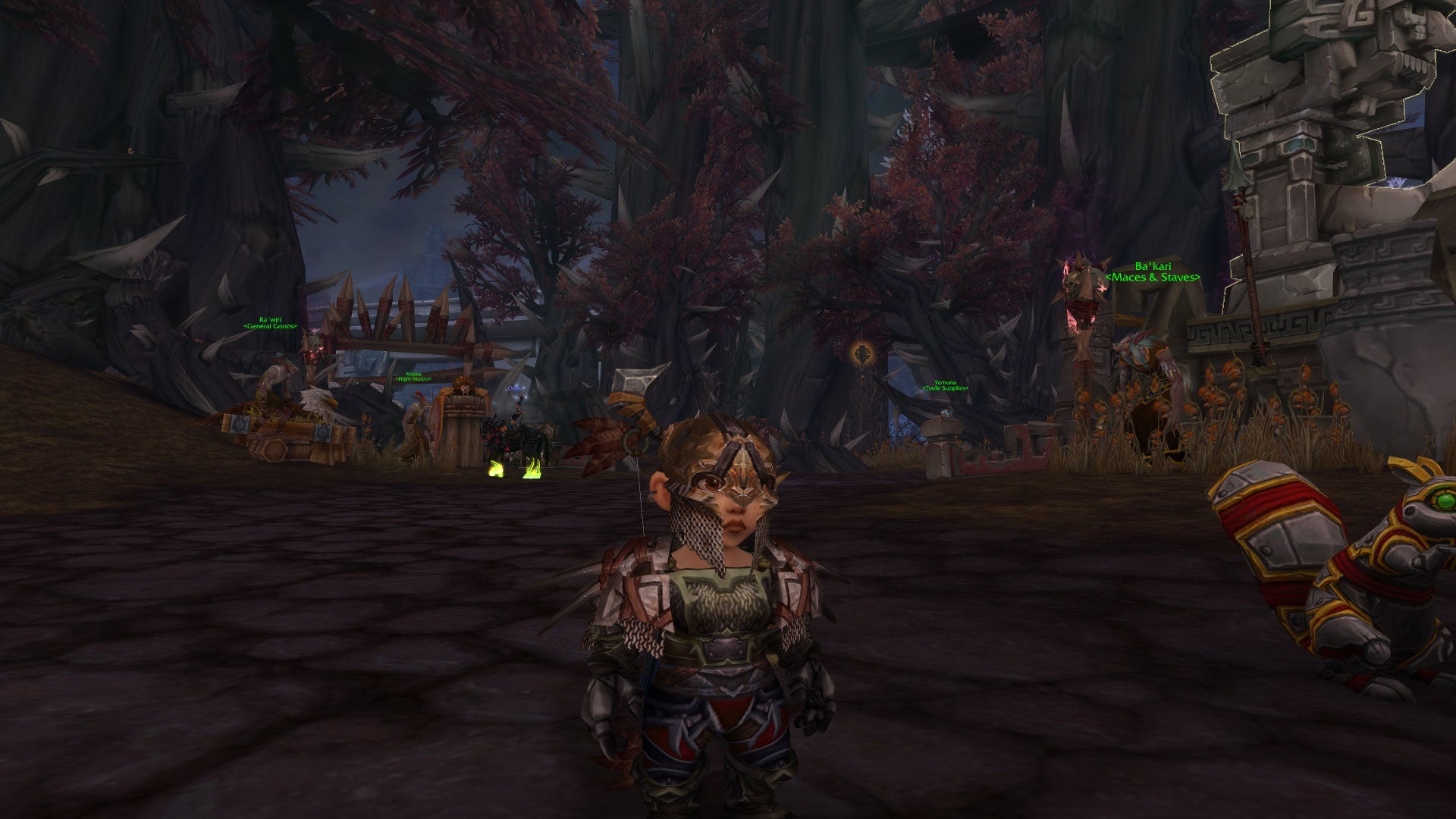 Our trip through the first five World of Warcraft expansions on the way to Legion continues into Northrend, the frozen continent no one was paying attention to for the first four years of the game's existence, but is actually a major threat to all existence.

In The Burning Crusade the Dark Portal was awakened, granting players access to Outland. Cataclysm transformed the world, opening up new areas of exploration. In Mists of Pandaria a hidden realm suddenly appeared, and Warlords of Draenor transported players to a different time and place.

All of those expansions gave us very good reasons why we couldn't go to the new places previously. In Wrath of the Lich King, everybody just decided to sail North to that other continent at the same time. 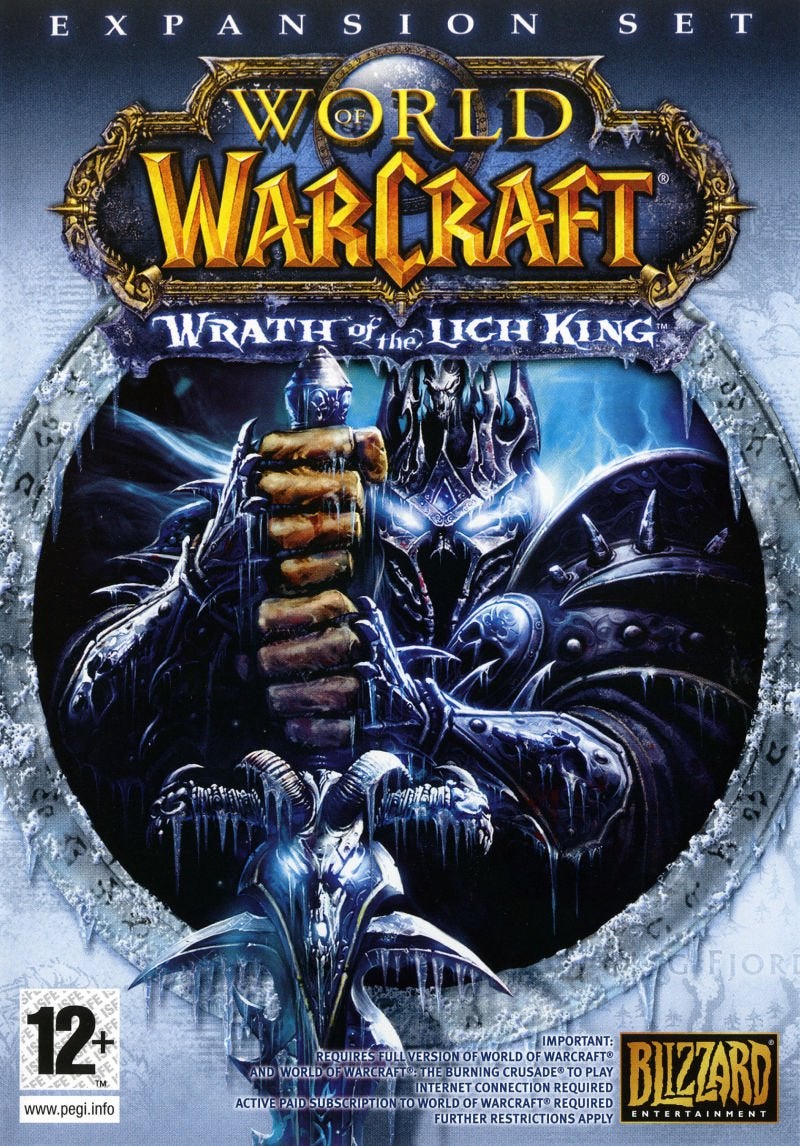 November 2008 was all about the Lich King.

There were lore reasons, of course, but that we went four years without popping up there for some Frostweave cloth or cobalt ore seems silly.

Though not nearly as silly as my Gnome Hunter's first trip to Northrend. In the wake of the Legion pre-patch, the boats out of Stormwind Harbour were a little bit buggy. Sometimes they didn't appear for hours. Other times they'd appear, only to disappear after zoning in to Northrend. 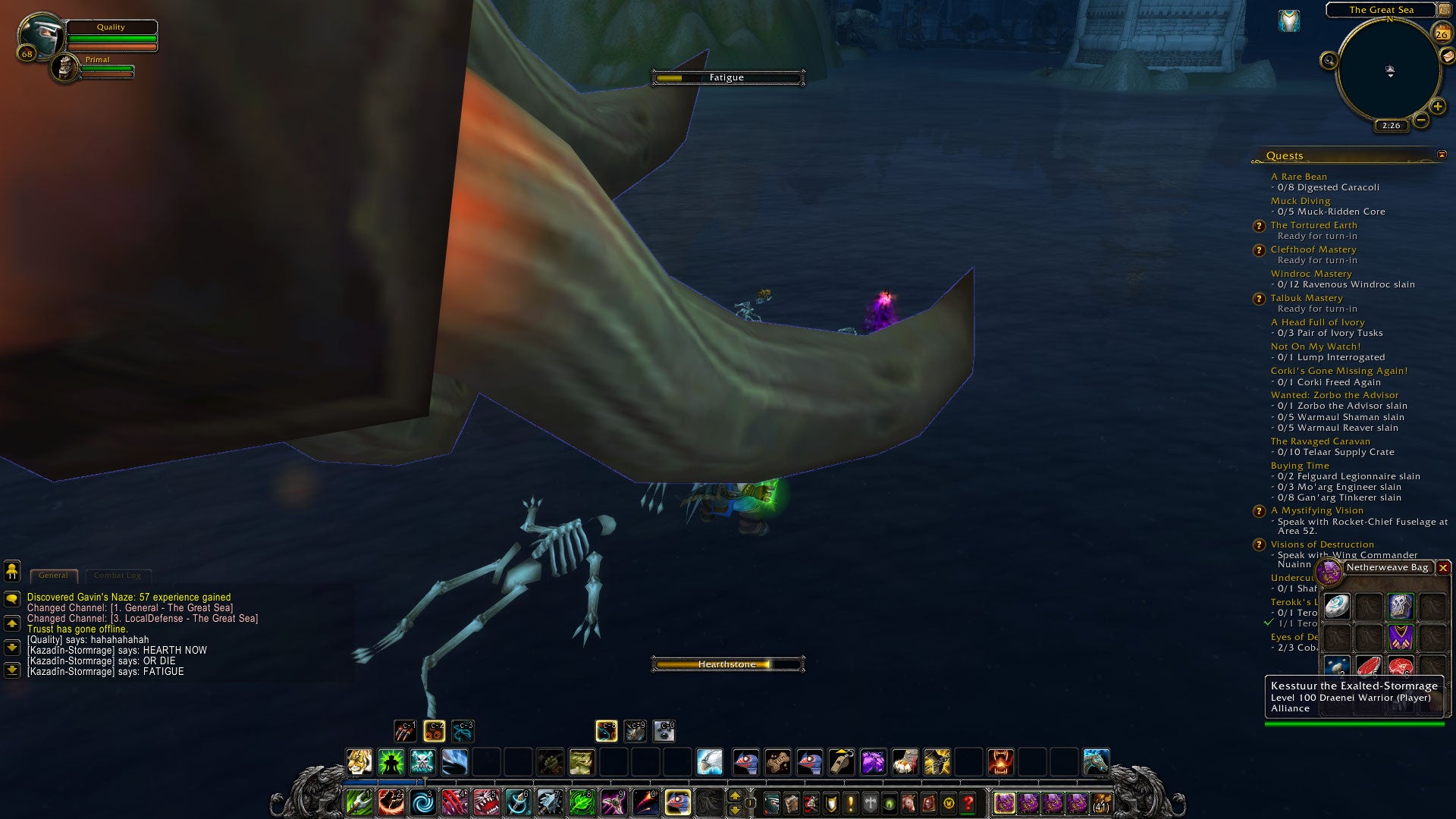 Pile of sea corpses just outside of Valiance Keep.

In order to make it to Northrend this time around, I had to get a port to the floating magic city of Dalaran (soon opening a new location). 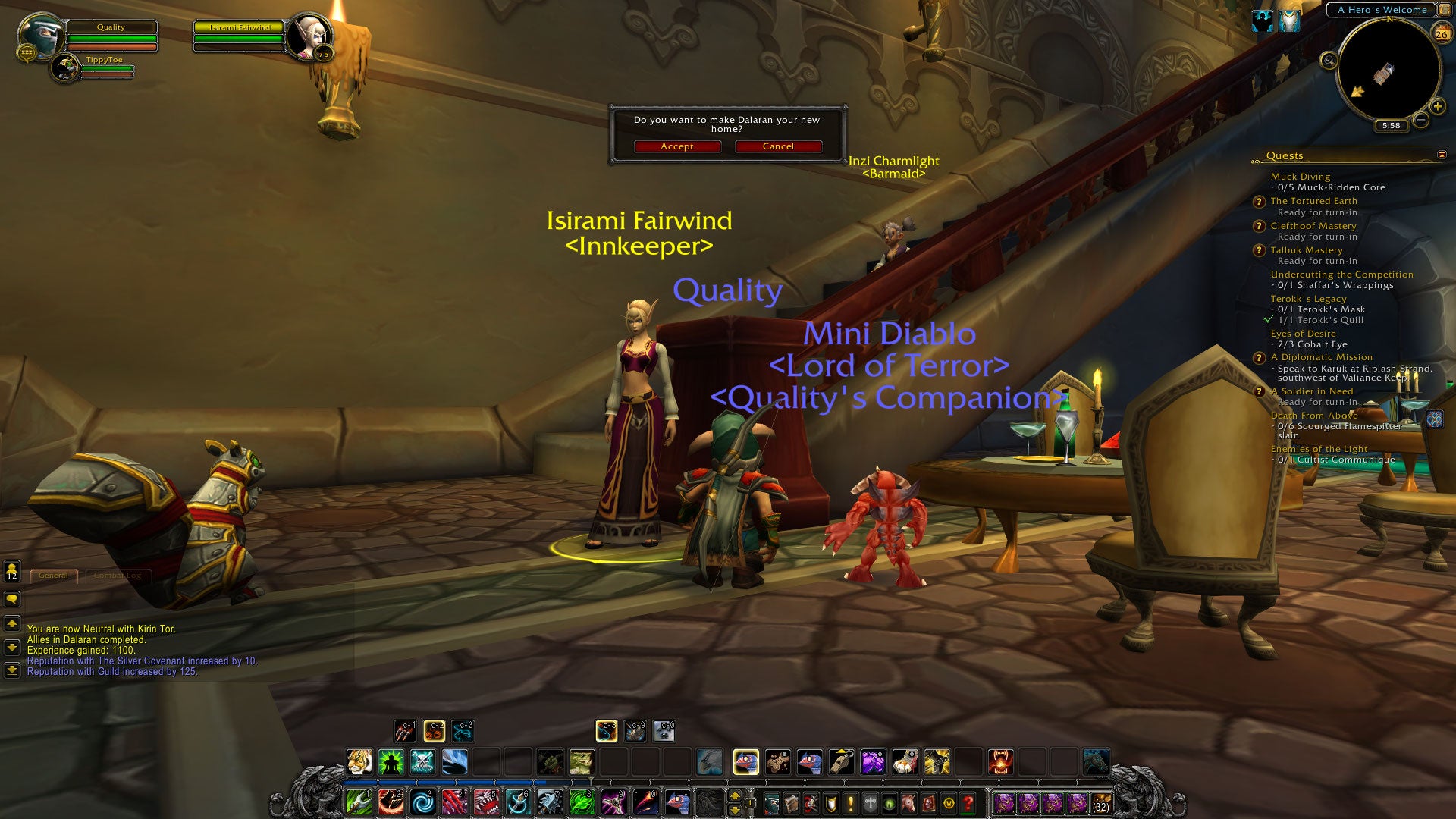 This screenshot is mainly showing off my Mini Diablo.

From there I flew all the way to Valiance Keep in the Borean Tundra, where everyone greeted me as if I was fresh off the boat.

When Wrath of the Lich King first came out, players couldn't fly in Northrend until level 77. This was due to the treacherous nature of flying in cold weather. There was no way mounts and riders without special training could navigate harsh wintry locations like this: 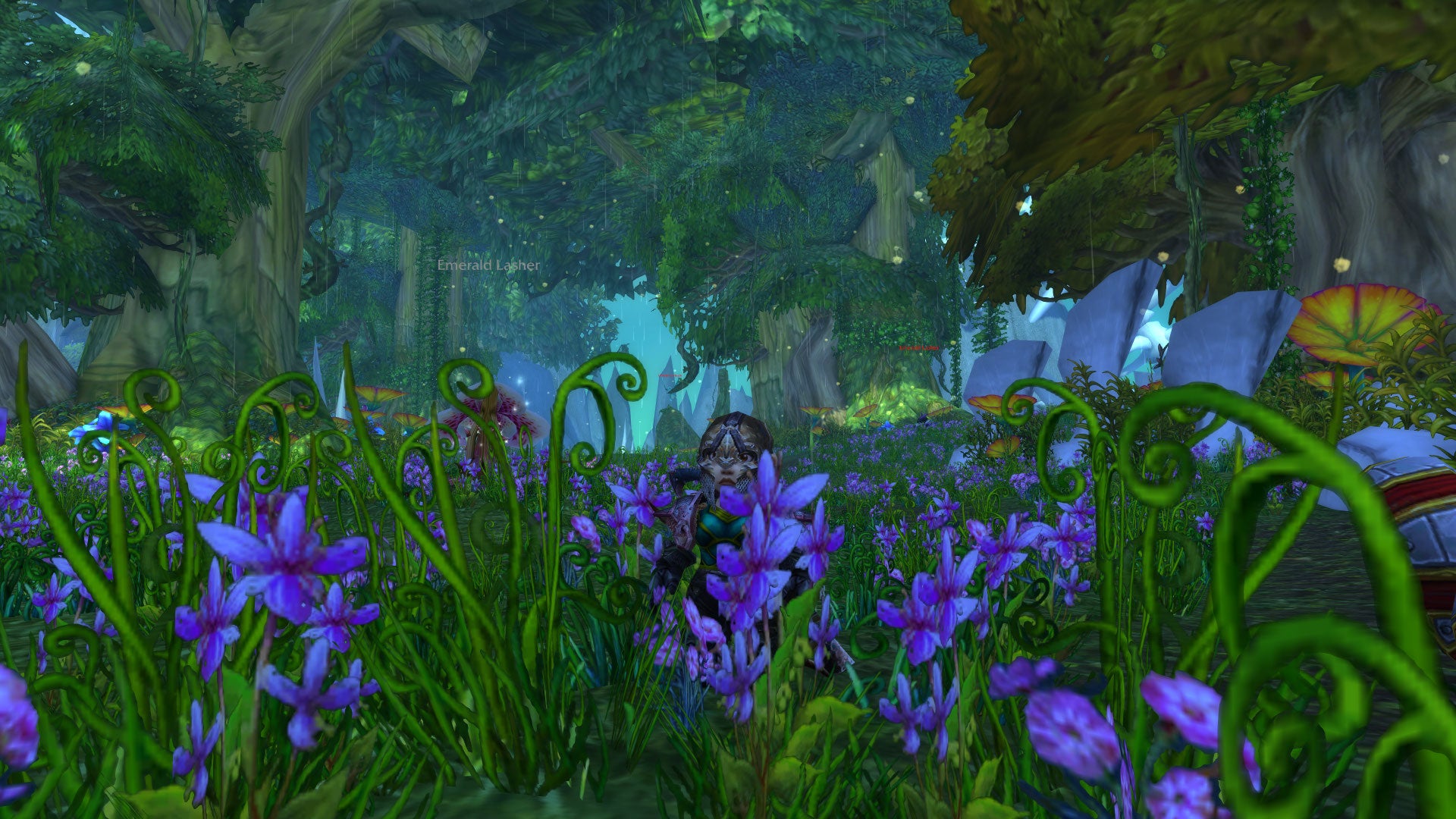 Of course it was just an excuse for players to experience content on the new continent the way it was initially intended to to experienced — on foot, slowly, with a sense of danger. That way players could experience most of what Northrend's eight zones had to offer, slowly marching toward the inevitable confrontation with The Lich King.

The Lich King! One of the most feared figures in Warcraft lore! Creator of the Death Knight hero class! Breaker of hearts! I didn't actually run into him much during my brief trot through levels 70 to 80. I did see an image of him here: 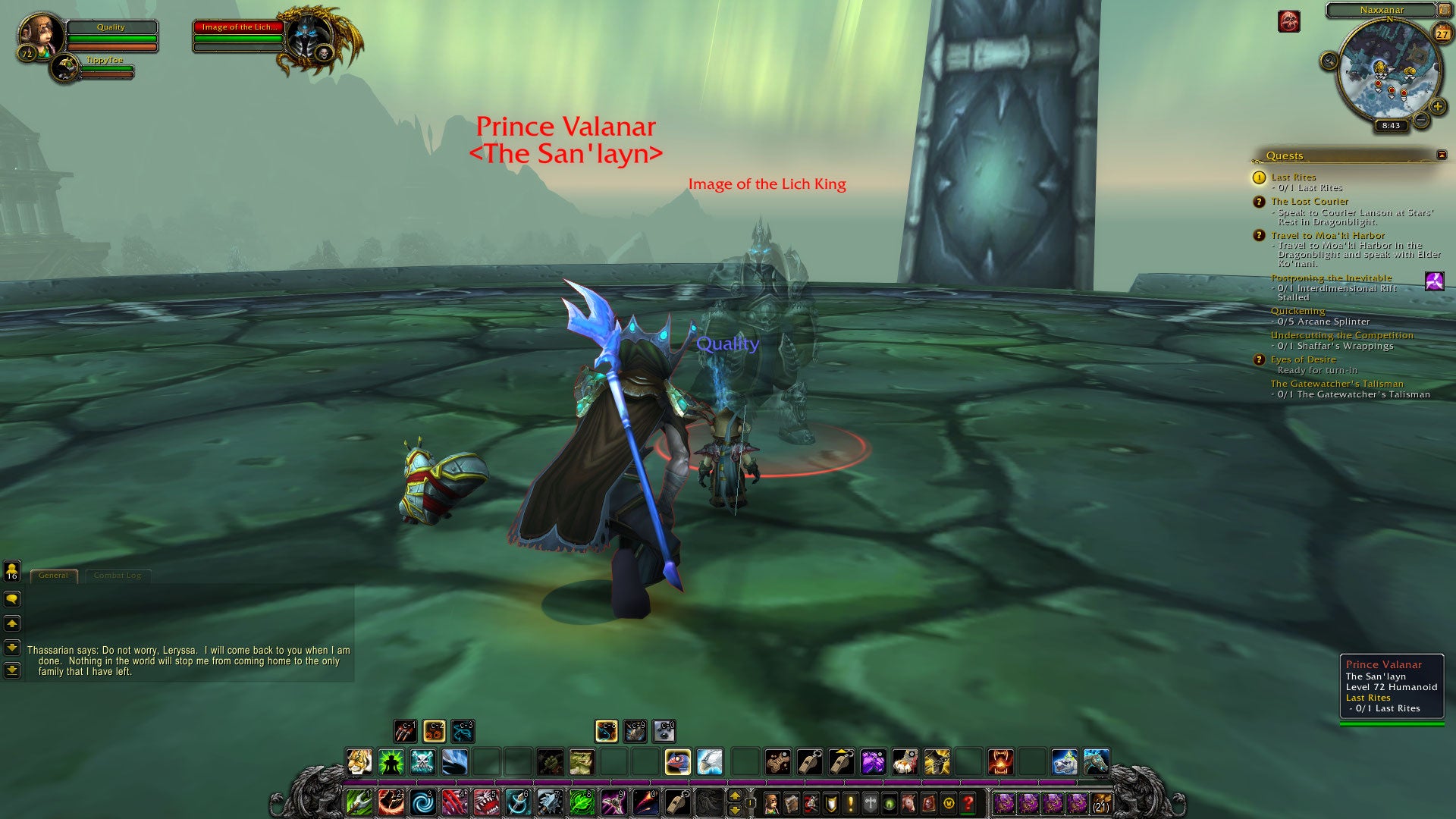 And I think this is a spirit echo of pre-Lich King Arthas here: 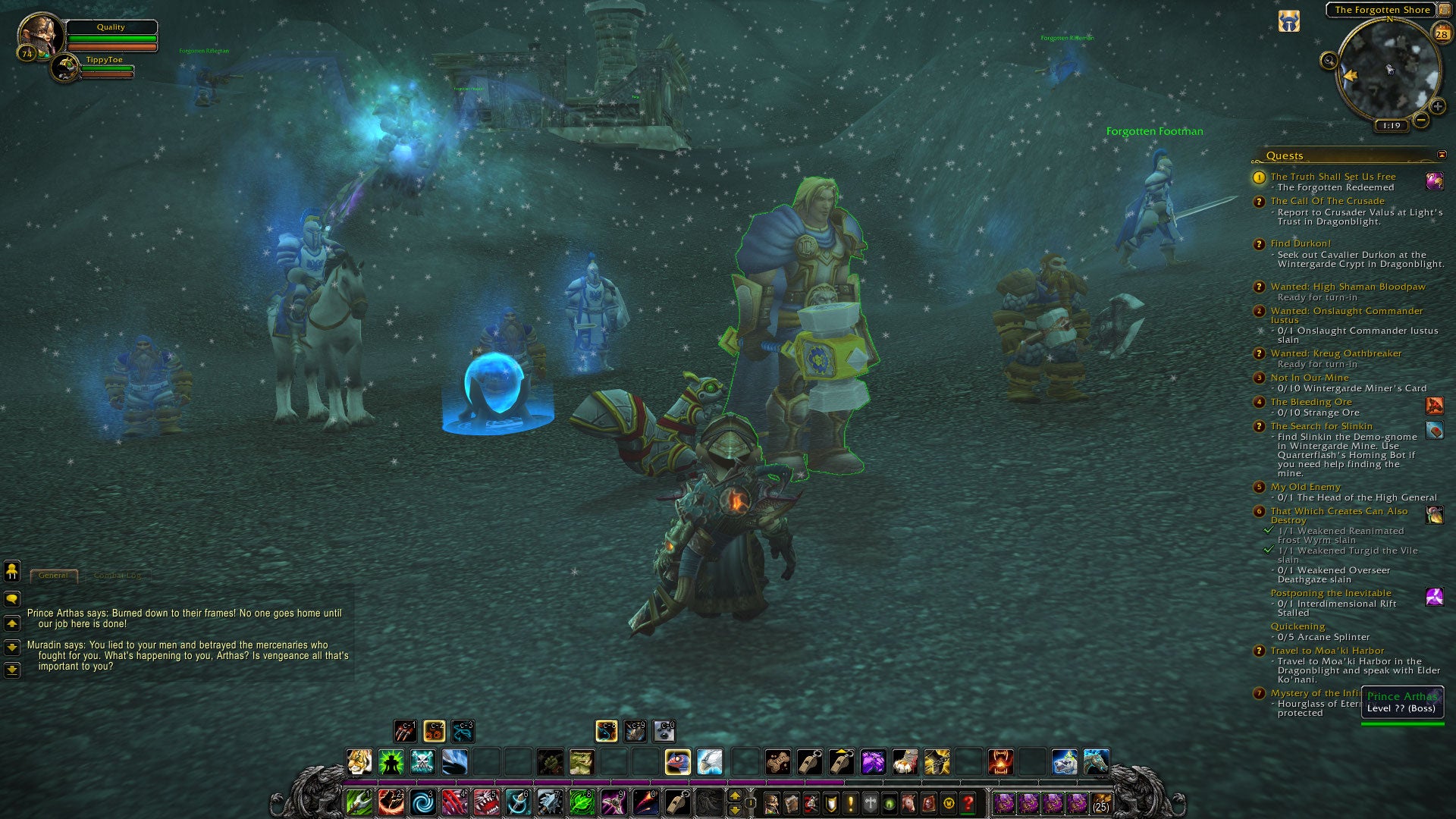 But thanks to being able to fly at level 68, the experience bonus of the Dungeon Finder (which I used sparingly) and the ridiculousness of being a Hunter (Kill ten things? OK, done. Next?), I blazed through the content in no-time flat, clearing all of three zones before hitting level 80 and moving on. 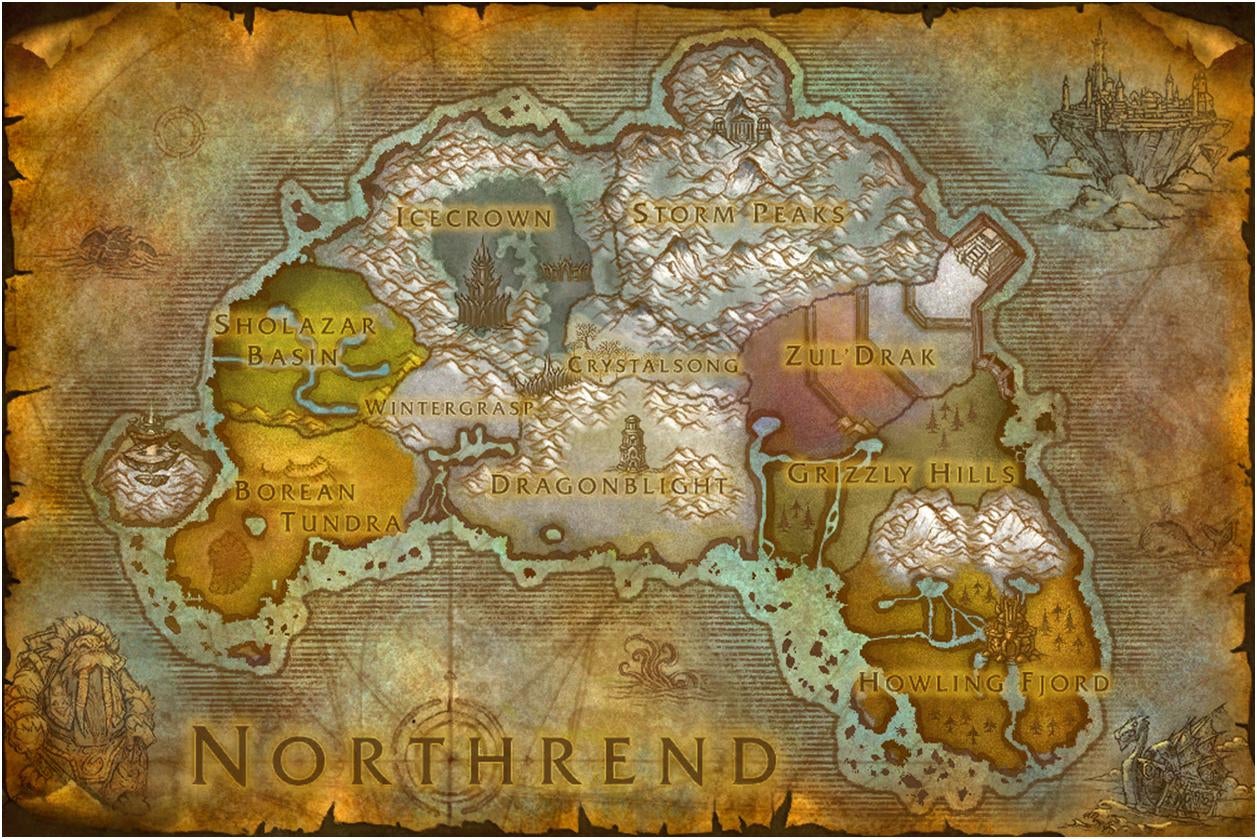 That's the tragedy of these older expansions, I'm finding. All of this content, without much impetus remaining to complete it. I did notice several max-level players going through quest content in Northrend while I worked my way through, which seems like it might be a fun way to spend an afternoon, but from a pure levelling standpoint, Lich King goes by way too fast.

Part of the blames lies in Wrath of the Lich King's questing. The Burning Crusade gave players beautiful places to complete boring quests. As a response, Lich King is where Blizzard really started getting creative with questing. There are still plenty of "kill X of Y" tasks, but these generally lead to much more exciting events. Things like sneaking into enemy territory on the back of an animal god. 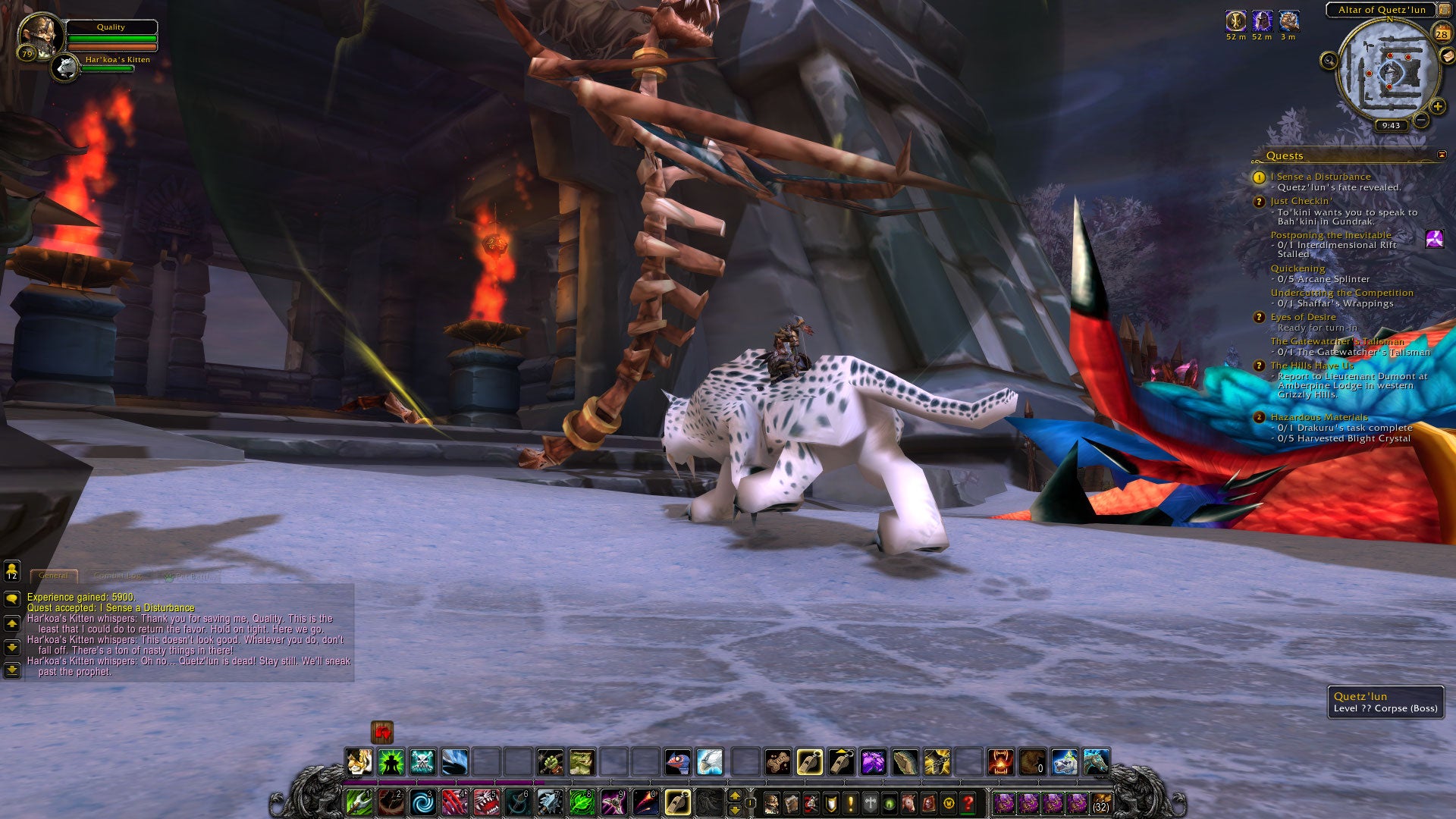 Or riding on the back of a rampaging titan. 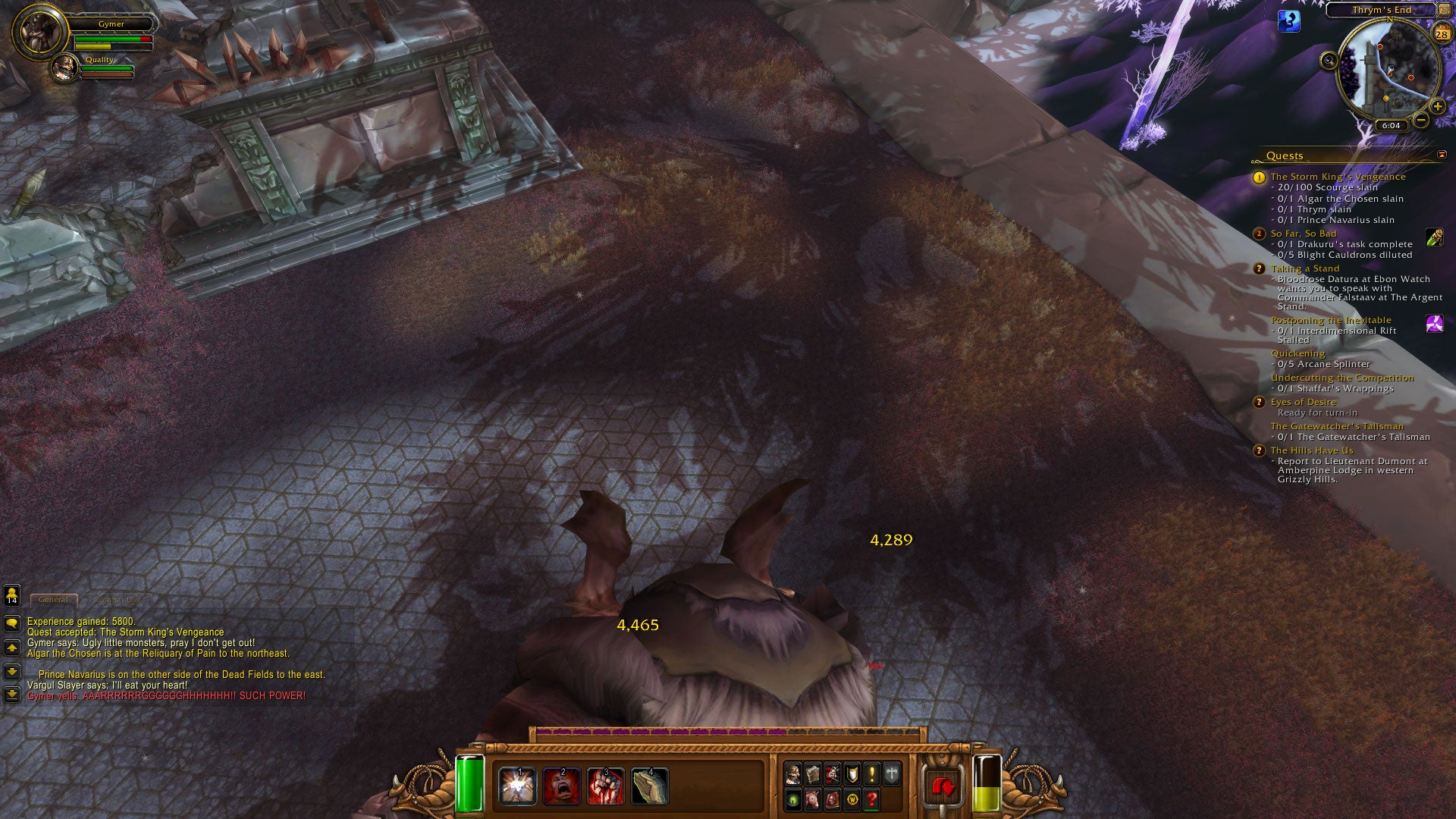 Or fighting alongside yourself from the future. 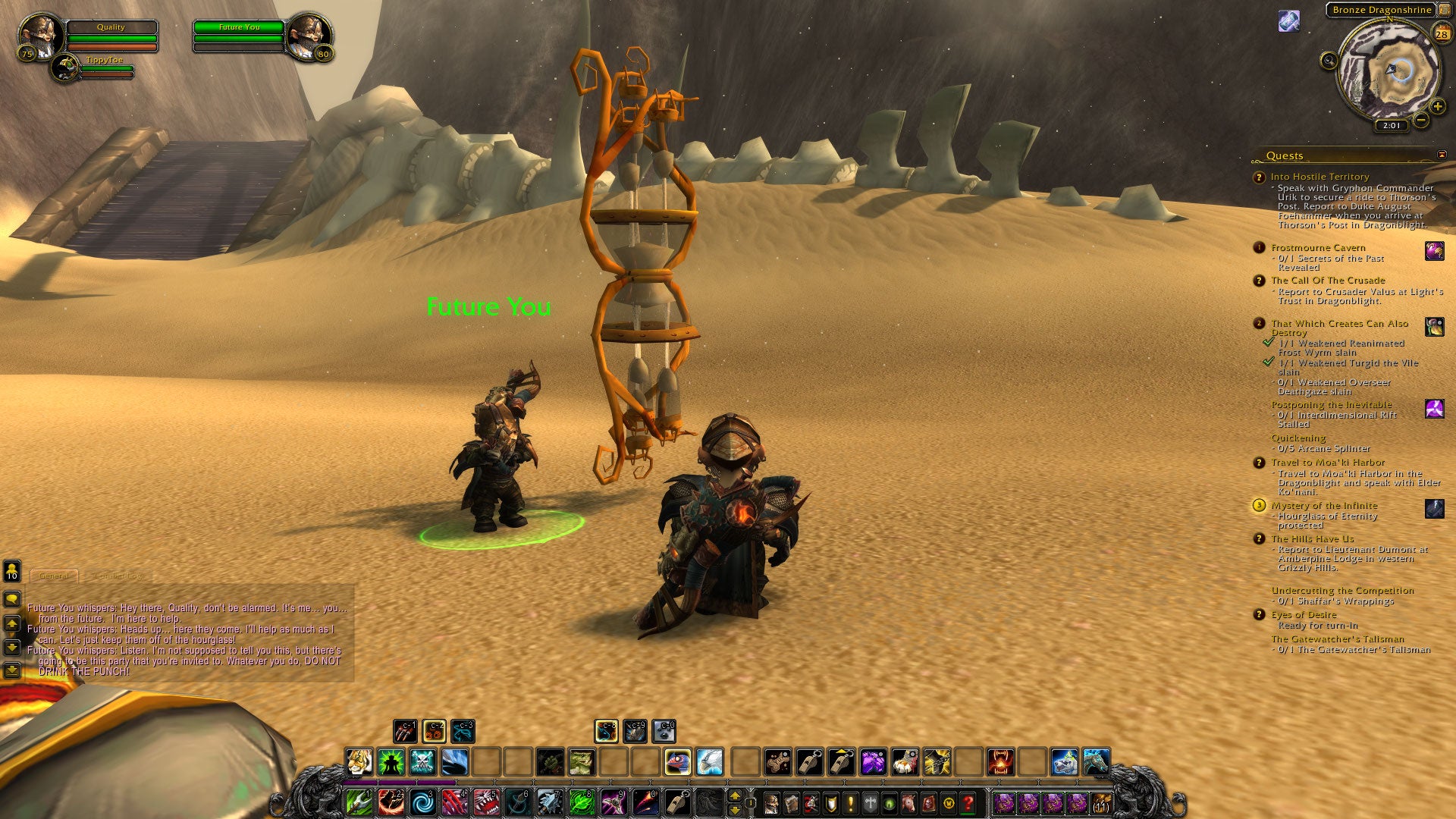 And then they kissed.

Not only are the quests more exciting, they're also a bit more contained. Where The Burning Crusade enjoyed sending players running from one end of a zone to the other, Wrath started tightening things up, giving players a series of smaller, mostly self-contained quest hubs scattered throughout each zone.

I particular enjoyed hanging out with my Gnomies in the Borean Tundra, fighting giant mechs. 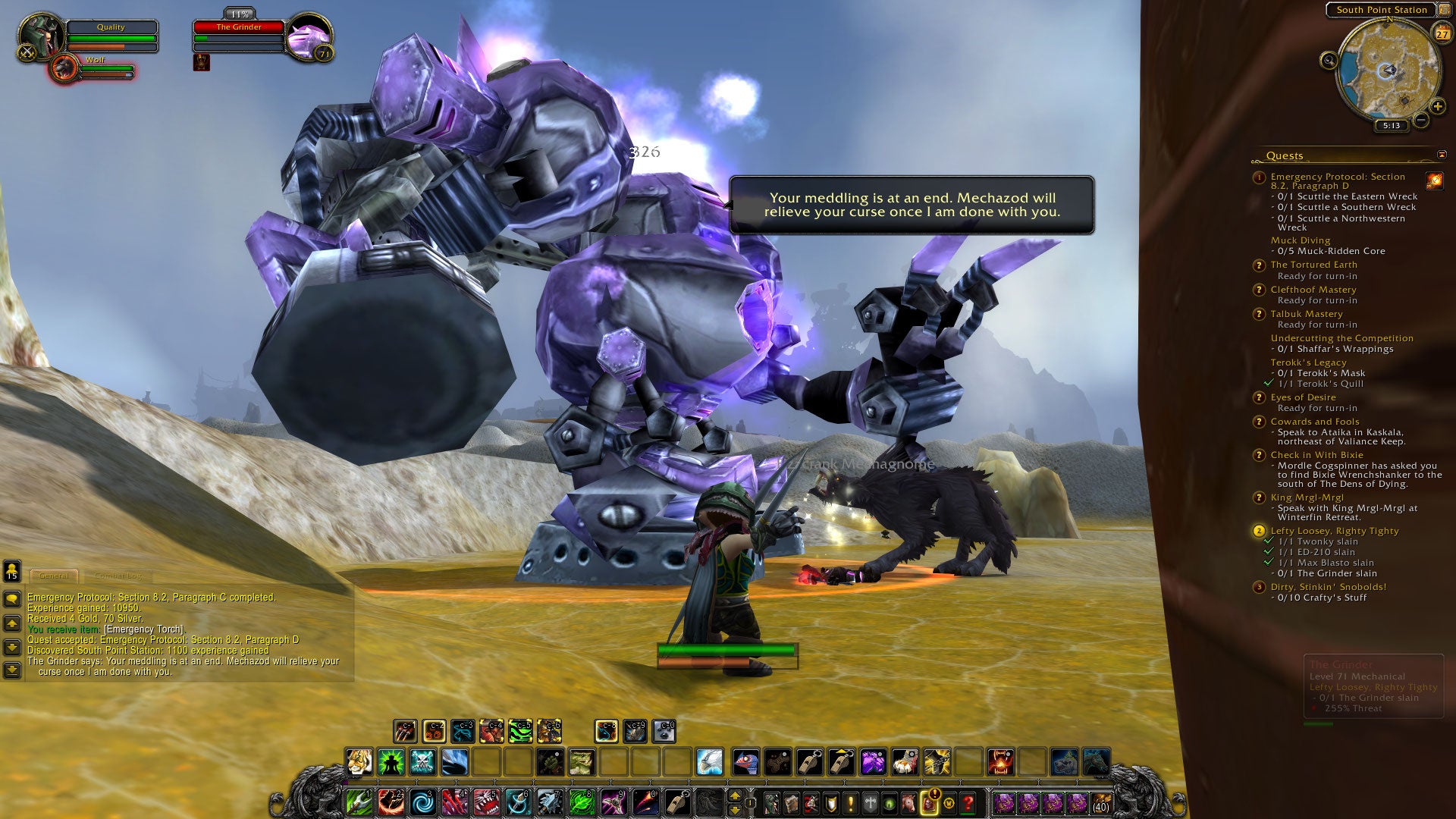 I guess they're all giant when you're this short.

The Scourge invasion of whichever town this was in Dragonblight culminated nicely. Wrath is also where Blizzard started giving quests a more epic, cinematic feel, with nifty camera angles and dramatic dialogue between NPCs. 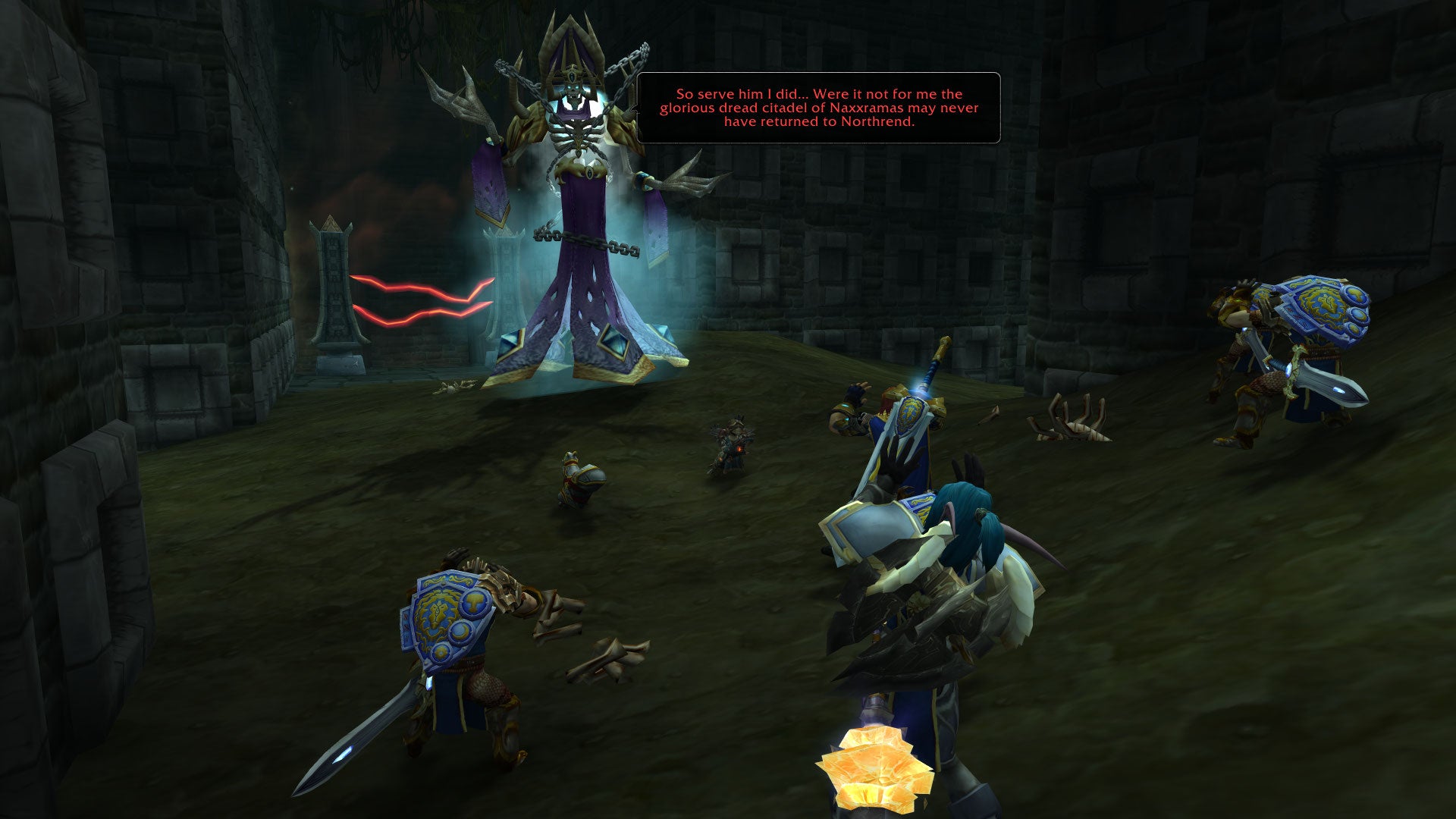 The dungeons in Wrath of the Lich King — well, let's face it. Dungeons in World of Warcraft aren't anything like they used to be anymore. Five players form up via queue, run through, leave. Barely a word is said. It's sad. Hopefully I can get a good guild group going for Legion's new additions, before they become so rote that folks just start running right over them. 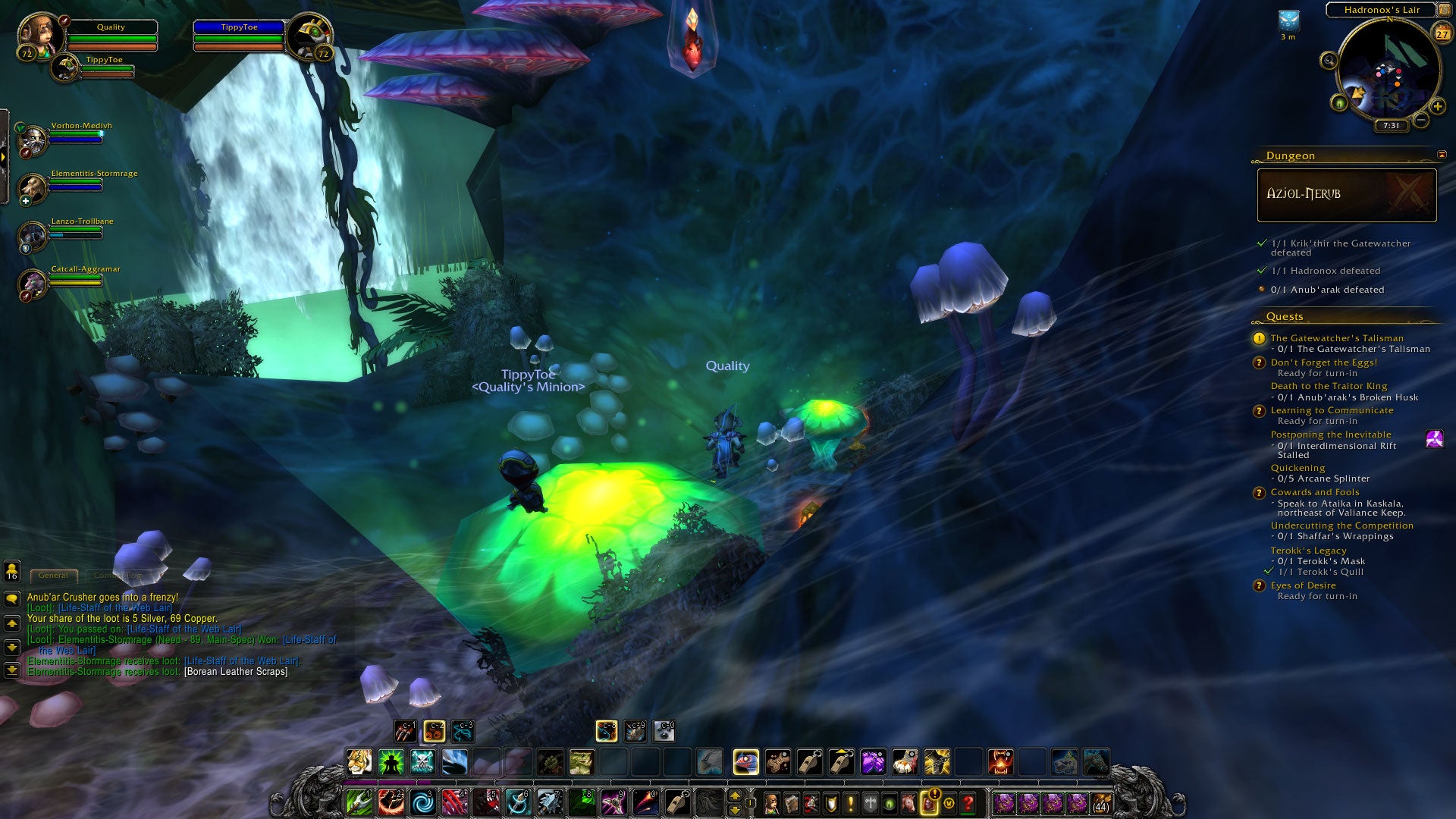 I do not appreciate all the spiders. Seriously.

But that's fine. The single player experience is entertaining enough in Wrath of the Lich King that I didn't need dungeons to break up the monotony. There was something exciting and new around every corner, and I hit level 80 wishing I could stay and hang out with my animal friends some more. 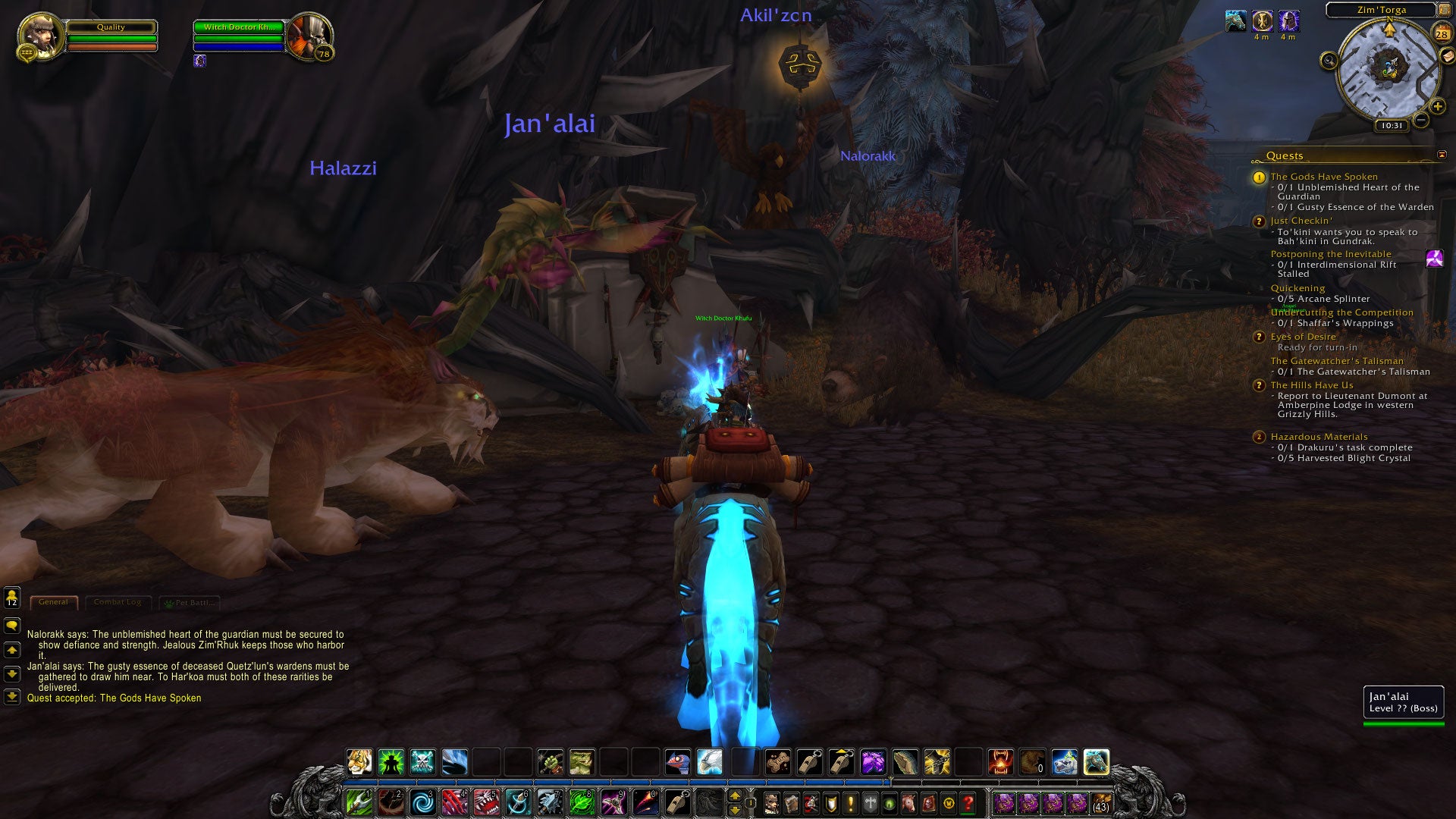 Unfortunately, I promised myself I would move on at the prescribed character levels for these expansion packs, so shortly after my adventures in Zul'Drak ended it was time to move on. That said, out of all the expansion packs I've played through on my way to 100, Wrath of the Lich King is the most likely to drag me back to finish the fight. 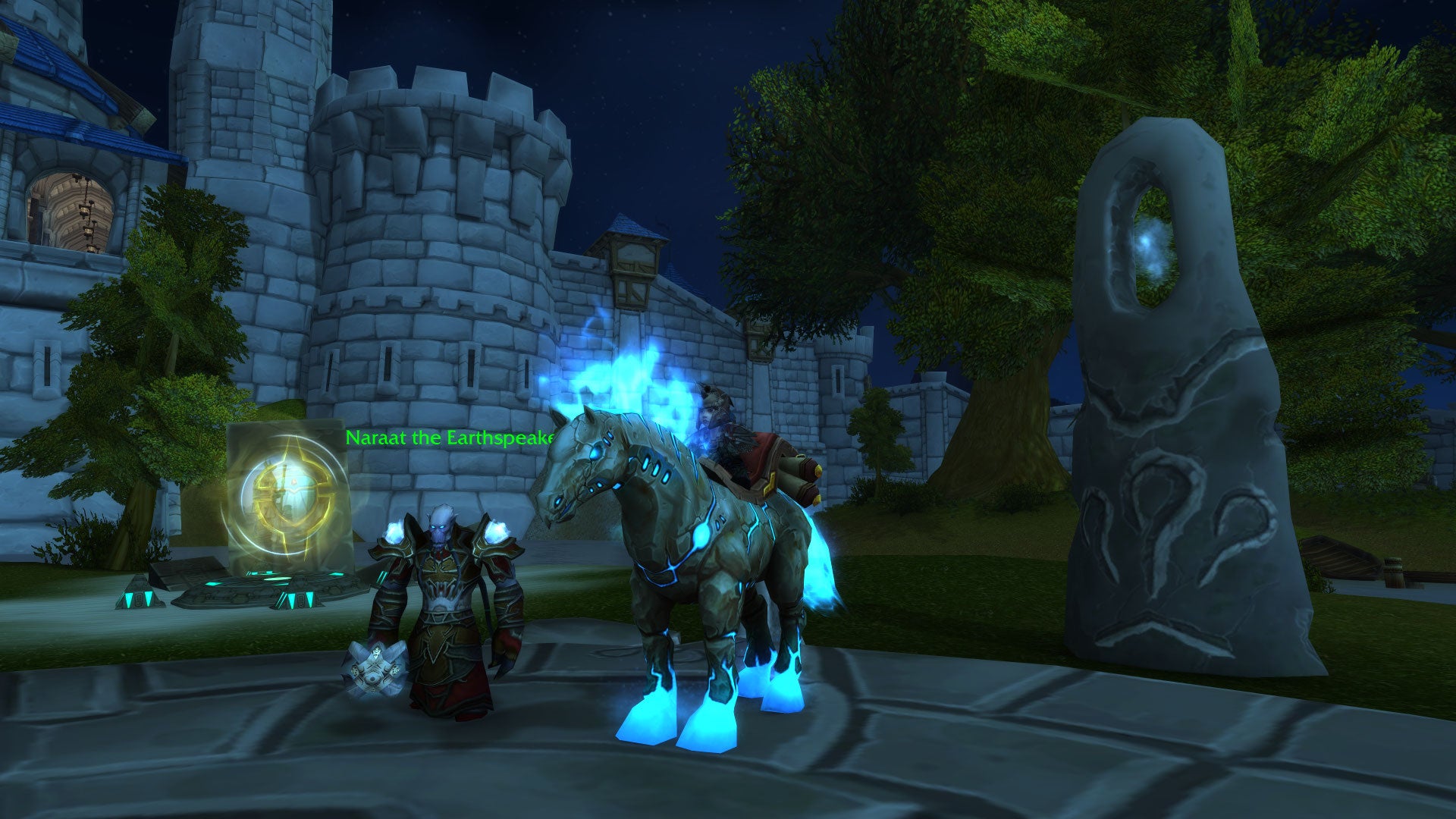 Next week we'll fins out what this Earthspeaker fellow wants.