Pandemic is probably the most popular cooperative board game in the world. It’s certainly the highest ranked. If you’ve only ever played Monopoly, it’s an epiphany. But cooperative games suck, and here’s why I’m never playing Pandemic again.*

Two steps back. Cooperative board games, on one level, are genius. For so long, board games have been about trying to destroy each other (Risk, Diplomacy, Axis & Allies, every other wargame under the sun), bankrupt each other (*sigh*, Monopoly), or just beating each other. But with co-op games, you’re playing together, against the game.

On one level, Dungeons and Dragons has been doing something similar for years: everyone gangs up to fight the DM’s monsters and solve the DM’s puzzles. For me, the biggest revelation in the modern board-gaming era was Reiner Knizia’s The Lord of the Rings (2000), which turned the DM into the board. In that game, you played as the hobbit foursome, Sam, Frodo, Pippin, Merry, and the George Best of hobbits, Fatty (because they needed to provide a fifth player). Together, you try to beat the game, before the game (masquerading as Sauron, Lord of Barad-dûr and Dark Lord of Mordor) beats you.

It’s the perfect panacea for that ultra-competitive friend that is unpleasant to game with because they both win too often and sulk bitterly when they lose (note: this isn’t me! Really, it isn’t!). For me, working together was entirely novel.

Almost a decade later, Pandemic came along and sent the world crazy. There have been cooperative games before, and cooperative games since, but somehow Pandemic captured the public imagination and garnered widespread appeal in the gaming world. Replace Sauron with the rider on the white horse (Pestilence), and Middle Earth for Earth-earth, and you have a game. Epidemics spread across the board (because that’s how epidemics work), and you are epidemiologists (such as the CDC or the WHO), trying to vaccinate the world (suck on that, Jenny McCarthy!) before the world dies of infection. Or The Walking Dead take over. Or all you’re left with Yorrick, the Last Man.

Cooperative games. As a genre, they’re here to stay. But that doesn’t mean I’m going to play very many of them.

But here’s the fatal flaw with coop games. Quarterbacking.

Gridiron, although often compelling, has a design flaw. Like Quidditch, which is basically designed to make the Seeker (a role designed precisely for one Harry Potter) the standout hero of the game, gridiron is a game all about the quarterback. Only he gets to throw the ball, only he gets to call the plays, and the other players just follow his lead. Now if you’re a new player and you have no idea what’s going on, sometimes this is helpful. But there comes a time when you want to stand on your own two feet, and make your own decisions, and perhaps make your own mistakes. But nay! A good quarterback refuses to lose! So because he’s played this game more, because he’s run the simulations, because he’s crushed the computer on the Insane difficulty setting, because he’s calculated a 23% higher success rate for his play over your play; because he’s the quarterback, he won’t let you. 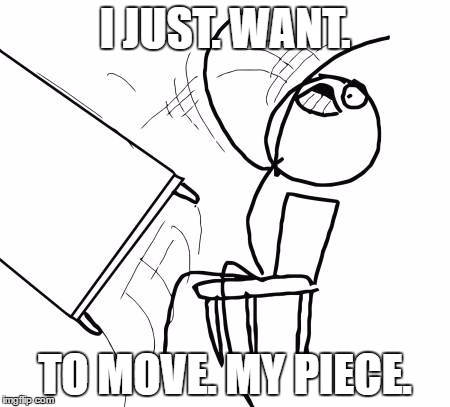 Maybe this doesn’t happen to you. If so, I’m happy for you. Go give Pandemic a 10/10 on BoardGameGeek. But me, I play with geeks and nerds–because like attracts like–and I tend to play with the sort of nerds who out-math me every day of the week.

Second: it’s just not that interesting. To me. My wife and I were lent Pandemic, and we played several games. We won a few, lost a few, but really weren’t all that compelled. Maybe I didn’t put the effort into immersing myself in the situation, and enjoying the reality of being the CDC. Maybe I just don’t have a strong enough Messiah complex. When the world falls prey to the new strain of Ebola I’ll just shrug impotently, like a good millennial. Either way, my wife and I cheerfully returned the game and never played it again. Did I mention my plan is to never play it again?

With a PvP game, part of the appeal comes as you pit your wits, cunning, and devious strategies against the other players. Even if I’m playing a tedious game, I’m playing it against other people. Maybe I can out-strategise them, or at least thwart them. Maybe I can throw them off with a double-fake, maybe I can disconcert them by trash-talking, or maybe I can just execute a Jedi mind-trick on them. Even a boring game can come with interesting personal interactions.

The real reason I’ll never play Pandemic again is because there are better games. More importantly, there are cooperative games that have solved the problem of the alpha quarterback.

Space Alert is one of my favourite cooperative games. You’re a crew, working together to keep your spaceship alive: keeping the plutonium reactor fuelled, diverting power to the secondary reactors, using power to fire the lasers, and turn on the shields, and instructing the droids to repel invaders.

It won the award 2009 Golden Geek Best Innovative Board Game, and the particular innovation Space Alert brings to the table is a tight real-time mechanism: each game lasts for a tense ten minutes while you frantically plan your moves, and then a resolution phase where you figure out whether you did everything you planned to do, or if your plans descended into chaos.

It neatly removes the aspect of quarterbacking, because each player barely has time enough to manage their own affair, let alone coordinate with everyone else. The game forces you to communicate, to trust each other and properly work together: can you time it properly so another player can fuel the reactors in time for you to engage the shields before the asteroid hits?

Castle Panic is a game I play with my seven-year-old. It’s great. At it’s heart, it’s a semi-cooperative tower-defence game, and hordres of gobins, orcs and trolls are knocking at your door, and knocking down your walls. Your aim is to kill the most monsters, and earn the imaginative title: Master Slayer! The twist with Castle Panic is that if the castle gets destroyed, you all lose. Because it’s semi-competitive, the other players aren’t allowed to know my cards, and I have good reasons for not wanting to tell them. So you’re working together… but not too hard. And there are times where you might risk defeat to gain victory. Or there are times when you must forgo winning to avoid losing.

Are you familiar with Battlestar Galactica? The players are a small remnant of humanity are fleeing their homelands, trying to find the now-mythical Earth, before they are destroyed forever by the evil robots, the Cylons. However the catch is, some Cylons are so technologically advanced they can masquerade flawlessly as humans, so the threat from within is as great as from without. There is no better board game that so fundamentally captures the essence of the show: trust is necessary to survive, and yet heady dose of paranoia is necessary to avoid betrayal. The players work together to escape all the challenges, but there may well be a traitor, a Cylon amongst them. Even if there’s not, there will be, because there are also sleeper agents, who flip to the dark side mid-way through the game.

This is my favourite game from 2008 and still a personal favourite, even though I rarely have time to play a four-hour game anymore. The traitor mechanic perfectly removes any possibility of quarterbacking and collaboration, because every other player is under suspicion. You can only work with someone else insofar as you trust them, and the X-Files mantra applies here: trust no-one. Except that you need the other humans to survive!

Honourable mention: If you don’t have time to play Battlestar Galactica, the next nearest experience is Resistance, and Resistance: Avalon (which has also been re-released under a different theme, Resistance: Hidden Agenda), which are exceedingly good games in and of themselves. It’s similar to game of Werewolf or Mafia, except nobody dies, and the Spies are working against the Resistance. It’s an excellent implementation of the traitor mechanic, but it is much more a bluffing an deduction game than a co-operative game.

Hanabi (winner of the 2013 Spiel des Jahres) is a cooperative game with hidden information. The aim is pretty simple: together, play cards in five colours, in order from 1-5. The devious twist in an otherwise straightforward card game is this: everyone holds their cards facing away from them. So you know everyone else’s cards except your own. On your turn you can play a card or reveal a small amount of information to another player. So table-talking is strictly prohibited, and the possibility of quarterbacking is strictly prohibited. The game is founded on the ability to trust one another and remember the clues you’ve been given.

Honourable mention: Bomb Squad is a recently Kickstarted cooperative game that merges the hidden-knowledge aspect of Hanabi with the timed aspect of Space Alert.

Okay, so I said I’m never playing Pandemic again, and I mean it. But I’m willing to guess that Pandemic Legacy is a different enough beast from it’s parent, in the same way Risk Legacy was a game I enjoyed playing, despite Risk being a synonym for “bad game”. Games don’t become the most highly rated game on BoardGameGeek for nothing. Also, I trust Rob Daviau. As I’ve written before, legacy games are mind-blowingly worthwhile. If nothing else, legacy games generate the story and the interest you might garner from a Dungeons and Dragons campaign.

Also, part of working on a campaign together, like with D&D, is that you have to learn to trust each other. Your chemistry works itself out, and from what I hear, it has enough twists and turns to keep everyone.

For me, Pandemic is a bit like Settlers of Catan, an innovation that’s had its day. It was revolutionary for it’s time, and it’s still an excellently implemented coop game. It deserves it’s space in the board game pantheon. However loads of games since them have sought to address the critical design flaw in cooperative games in an number of ways, and in ways that work well. When it comes down to it, all the games listed here are games I’d prefer to play over Pandemic. So I will say, with a degree of confidence, that Pandemic is a game I will never play again.