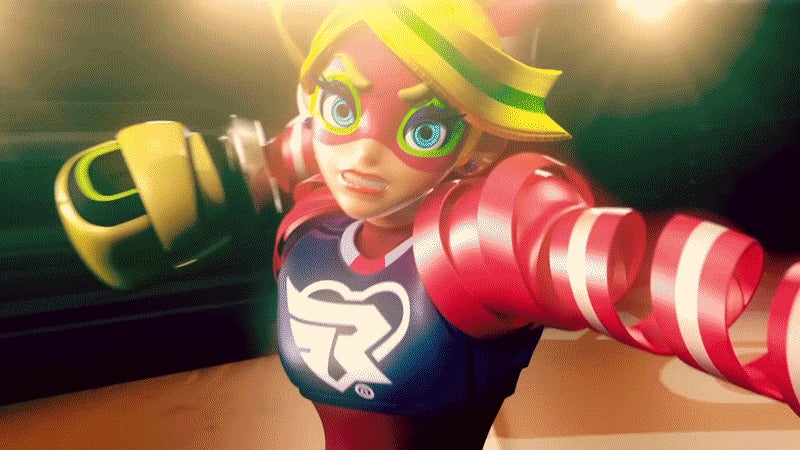 On the surface, Arms looks like a cute game about the dangers of slinky arms, but it quickly gets challenging. Out today, Nintendo's new fighting game has players throwing punches with spring-loaded limbs. Programming good impulses takes time and guidance. And although only ten fighters feature in Arms, with so many detachable arms to choose from, it's more like 100.

Back before Arms' "Test Punch," Kotaku's Kirk Hamilton wrote some tips for beginners. On the occasion of its release, here are some more in-depth tips for Arms' "Versus" mode, the game's bread-and-butter.

Start with an easy fighter

Some characters are more intuitive to pick up than others — for example, Ribbon Girl is quick, powerful and well-balanced. She'll get you used to dodging and, because she can double jump, acts as a crash course in how to exploit high ground. The "ramen bomber" Min Min, meanwhile, might be a popular pick, but she is tough to grok: Her left arm, which turns into a beam-shooting dragon when charged, is hard to aim and time punches with.

Ultimately, I suggest picking two to three fighters you feel comfortable with. And read up on their special abilities in the game's "Help" section. Twintelle can float if you jump and hold dash. Master Mummy heals himself when you hold "guard." Are you patient enough to play defensively? Are you impulsive enough to use speed to your advantage? Do you have excellent aim with heavy arms? These questions will help you narrow your fighters of choice. Don't try to master everyone immediately!

Familiarise yourself with your chosen fighters' arms

Even when you're starting with three arms per fighter, each fighter's possible arm combinations makes one fighter more like nine. At first, feel free to choose whichever grab your fancy (or Twintelle's "Chilla" and Kid Cobra's "Hydra" are easier), but when you're ready to get serious about improving, you should definitely study each fighter's arms effects.

Important qualities to remember: weight, which determines punch speed; elements, like fire, electricity, explosion and blind; spread, or how wide a range your arm has. 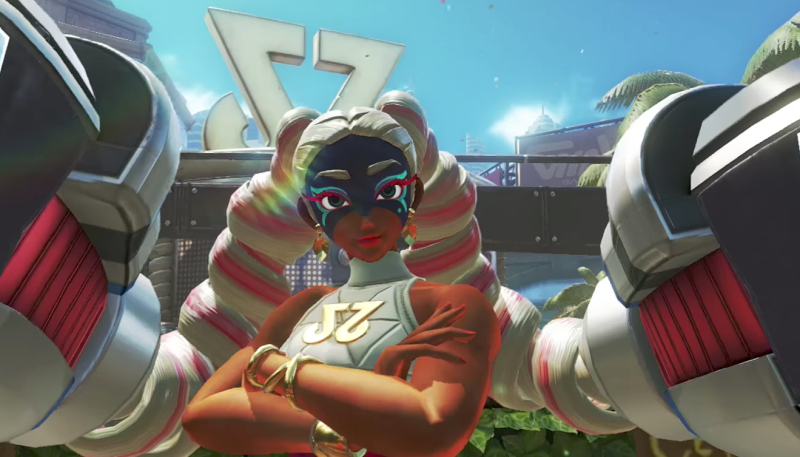 Do all of the training modes. OK, do them again

Arms' training modes — ranging from "Trading Punches" to "Don't Get Thrown" — are good. Cycle through the short training sessions, play a few games and then cycle through them again. That way, you can get them in your fingers.

Attacks beat throws, throws beat blocks, blocks beat attacks. Also, you can block an enemy's punch if you punch them back with that same arm.

Pick two to three combos and learn them well

Maybe a heavy arm would be a nice follow-up to something swifter. Or, maybe you like the idea of pushing your enemy in one direction with a boomerang arm, and then freezing them out with a "Chiller." Drill in two or three-layered combos, like Ninjara's warp plus a grab attack, or Kid Kobra's paralyzing "Seekie" arm plus a quick whip of his "Slammamander." Then, build on them.

Patience is a virtue

You'll feel tempted to throw a flurry of punches whenever you can, because it's fun. Don't do that. Patience is key. Arms is all about waiting for a good opening and capitalising on it. There are tons of opportunities to punish impulsive play. You don't want to be the person who's on the receiving end of that. (Don't get baited!)

For example, if your enemy breaks guard to grab you, jump up to dodge them and then grab them while their arms are still extended. If your opponent totally whiffs on their "Rush" attack, grab them! Also, it's not always the best move to drop everything to suck up items — regenerating 50 hit points is nice, but if you're savvy, you could steal 150 from your opponent with a well-timed grab when they're distracted.

Be careful with your "Rush" attacks

This is important: Absolutely do not do your "Rush" attack until your enemy's just reached out for a grab or is otherwise vulnerable — that way, you won't waste it!

Charge up your punches whenever you can

Playing defensively is a great strategy not just because it's safe, but because it's how you charge up your arms. Hold down the "guard" button and your arms will get that nice, charged glow. Whenever you have an extra split second, charge up your punches. Freezing or blinding an enemy can be the difference between landing one punch or landing three.

Figure out which controller scheme works

I like playing most in the Switch's handheld mode, followed closely by the "Pro" controller or Joy-Con grip controller. But that's just me.

Try the other modes

"V-Ball," "Hoops," "Skillshot" and "1-on-100" mode are fun, sure, but no one's about to invite you over for a good ol' ARMS "Skillshot" session. Play around in these modes, and practicing them will give you an edge in online "Party" matches or the single-player mode, but I wouldn't kid yourself — Arms is about its "Fight" mode. The other stuff is cute and peripheral. So don't spend too much time mastering "Hoops."

Save up more for more arms

I wouldn't waste my money on the "Short Timer." When you want new arms, save up for a "Medium" or "Long" timer. You'll get more bang for your buck, even if it takes a little longer.

How do you get those bucks? Play Arms' single-player, a lot. It will get repetitive, but it's an easy path to unlocking all your favourite fighters' arms.

Play with strangers in strange lands

Arms is a great way to waste five minutes when you're waiting for your third friend to put on make-up. I've also found that, when you're just messing around, it's easy for strangers or non-gamers to pick up. Suggest a game of Arms to friends, acquaintances or strangers you meet when you're travelling with the Switch. It's a great way to pass time. Just go easy on newcomers.