The big question to come out of the latest episode of Game of Thrones was how the impasse between Jon Snow and Daenerys Targaryen was going to be fixed. It turns out that divide is a hell of a lot more complicated than we thought, since a key prop suggests Tyrion Lannister is keeping one of the parties in the dark. In the second episode of season seven, “Stormborn,” Tyrion beseeches Daenerys to send a message to Jon Snow so they can join forces against Cersei Lannister. However, Daenerys has no intention of letting Jon stay as King in the North, so she orders Tyrion to demand Jon bend the knee. This isn’t an unusual request for someone wanting to rule the Seven Kingdoms; in the season seven premiere, Cersei’s own letter to Jon Snow demanded the exact same thing.

This presents a major problem for Jon Snow, as there’s no way the North would surrender its newly re-established kingdom… especially not to a Targaryen (barring the inevitable reveal of Jon’s secret parentage). So, how could Jon possibly justify accepting Dany’s summons if it meant he’d have to give up his crown? If the letter is to be believed, it’s because Jon doesn’t know he’s supposed to bend the knee. 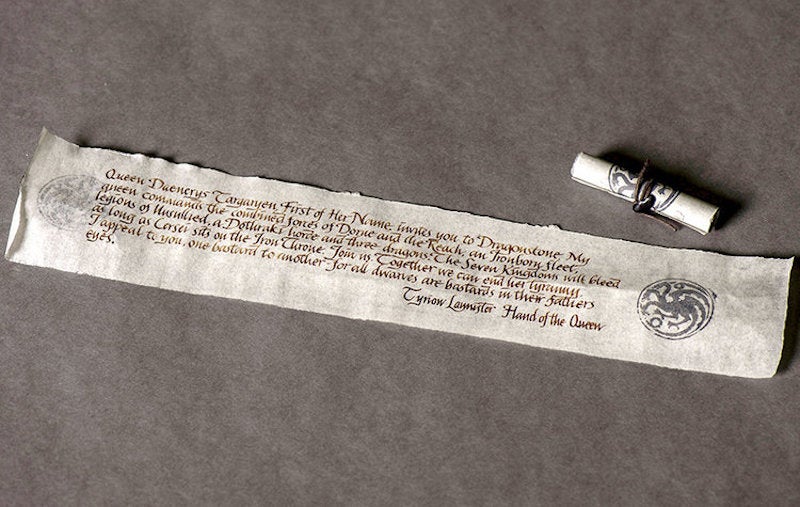 HBO recently released the letter Tyrion sent to Jon Snow, part of a collection of letters from the episode (and yes, it includes Jorah’s sad emo missive to Daenerys). Here is the text of Tyrion’s letter in its entirety:

Queen Daenerys Targaryen, First of Her Name, invites you to Dragonstone. My queen commands the combined forces of Dorne and the Reach, an Ironborn fleet, legions of Unsullied, a Dothraki horde and three dragons. The Seven Kingdoms will bleed as long as Cersei sits on the Iron Throne. Join us. Together we can end her tyranny. I appeal to you, one bastard to another — for all dwarves are bastards in their fathers’ eyes.

Tyrion Lannister Hand of the Queen

Notice anything missing? That’s right, there’s literally no mention of Jon Snow having to bend the knee to Daenerys Targaryen. In fact, the letter seems to suggest the exact opposite: an alliance.

There are two possible explanations for this. The easy one is that the prop is inaccurate. For example, it could’ve been made before the scene between Daenerys and Tyrion was finalised or filmed, and that her demand that Jon Snow “bend the knee” wasn’t in a previous version. However, if the prop accurately reflects the episode, that means something else entirely.

Tyrion likely knows that Jon isn’t going to bend the knee to a foreign queen, and any demand he do so would be immediately rejected. So, Tyrion might be playing his cards to get Jon to the table so they can negotiate in person. The downside of this is that both Jon Snow and Daenerys Targaryen will be meeting on different terms. She assumes he’ll surrender his kingdom, and he believes she wants to forge an alliance.

The other cost is that, by not telling Jon of Dany’s intentions and demands, Tyrion may have defied his Queen. Given how badly Tyrion’s Dorne mission failed, and Olenna’s insistence that Dany be a “dragon,” this could spell trouble for Tyrion in the future.

All of these questions will likely be answered in the third episode of Game of Thrones, “The Queen’s Justice.” The teaser trailer shows Daenerys sitting regally on her throne as Jon Snow enters Dragonstone, showing she most likely has every intention of making him bend the knee. The question is whether he’ll cooperate… or worse, if he even knows he’s supposed to do it.