She’s written acclaimed runs on Wonder Woman, Birds of Prey, Deadpool, and a ton of other superhero comics. Now, Gail Simone is doing something she’s never done before, acting as Chief Architect for Lion Forge’s Catalyst Prime universe, home to superheroes from all walks of life.

Simone’s appointment as Chief Architect was announced during this year’s Comic-Con International in San Diego. I got the chance to talk to her during the convention about her new role, which she’s seriously enthused about.

In the edited and condensed conversation that follows, Simone talks about the Plastic Man miniseries she’s writing for DC Comics, the special qualities of Lion Forge and the Catalyst Prime universe, and gives slight hints about what’s coming next for the future of that superhero line.

I’ve been a fan for a while, Secret Six, Birds of Prey, Red Sonja… I love a lot of your work. But this is very different for you. Right? You’ve not been the vision-holder for an entire line of comics.

Gail Simone: No, I haven’t done that. I have done, on a smaller scale, event books and crossovers, particularly with Dynamite. And that’s where I learned that I really love doing that.

I never wanted to be in an editorial position, I think there are people a lot more qualified to do that than I am. But to be in a creative position and to make sure all the moving pieces make sense story-wise, and creatively, and adding a little “upping the stakes” type of storylines, that excites me.

And then to be working with a company whose goals are very similar to what mine have always been, super exciting. This is very huge. I am so excited to dig into this, you cannot even believe it.

State the goals for me, just for the record.

Simone: Well, their motto “Comics for Everyone” is the big, overarching goal. And it’s not just something that they say, it’s something that they carry out and do. And people have been coming up and talking to me in person, emails, Twitter, Facebook — people who are excited and telling me why they’re excited.

And they’re excited for a lot of the same reasons: They enjoy the Catalyst Prime line, they enjoy Lion Forge, because they feel like it’s inclusive, there’s lots of different storytelling. They have books for everyone. They have books for all ages, young readers, teens, things that are good for libraries, and just covering a huge variety.

And I love that, because I always feel like comics [are] for everyone. And the more people we can get reading comics, the happier it makes me.

The thing about your career and presence as a creator is that you engage with the fans a lot, and you’ve built up a very large following. People will follow you wherever you go. Do you feel like comics overall needs to change with how creators engage with audiences, and how can that feedback loop back into an organisation like Lion Forge?

Simone: As far as engaging, that’s about a personality and what a person’s comfortable doing with. I’m naturally a very shy person, which, a lot of people when they first hear that are kind of shocked. But this is something that I like to talk about and so I tend to be a lot more outgoing on the subject matter.

I’m not saying that when somebody on Twitter says they like a story, they’d like that girl to have such and such plot or whatever, I’m not saying we need to be as influenced by that.

But if people are saying they love comics, but they’re uncomfortable because there’s nothing that really is satisfying what they want to read, then we need to listen. And we need to listen to people so that we can draw in more people and a larger audience.

And the difference, frankly, from 2002 when I first started to now, is so huge, but that doesn’t mean we’re done yet.

Can you talk to me about the titles in the Catalyst Prime line and how you’re responding to to reading them?.

Simone: I’ve been going through reading the books and enjoying each title separately and thinking about them as a whole, and I’ve been talking to Dave [Steward] and Carl [Reed] about their visions and goals. Who is reading, why they’re reading, we’ve been having these conversations right now.

But I was so impressed with the quality of the books and the characters that have been created. Summit is just a delight to read, and something different we haven’t seen before. And I love that. And Noble, I like the storyline there, and I like that the characters are different, they have their own way of thinking of things, and he has a wife who is very highly skilled, too.

Accell, I had that with me at a Mexican-American owned restaurant the other night and it just struck such a chord with the owner, who knew I wrote comics, but was finally excited about a comic book because the character shared a similar background. That’s what I love to see, bringing in somebody new, or getting someone who’s been reading a while to try something new.

Superb, with David Walker… to have a superhero with Down syndrome and a best friend who treats him equally, we’re really just excited by that. And also, Astonisher was just this darker, more weird way of storytelling; Alex di Campi is the first one I read on that.

And I just fell in love with all these different takes. And learning that my sister, who’s in an elementary school library in a small school district with no budget had heard of Lion Forge — that excited me. Because I know that the reach is pretty big if that’s happening, especially in libraries. That excited me a lot.

Have you had a moment where you understand why an editorial choice you may have disagreed with in the past was made?

Simone: I’ve always had empathy for the whole editorial process of trying to get periodicals out on time. And wrangling a whole art team for a book… you know, that’s why I’m not interested in being an editor. I can imagine, too well, what it’s like.

But to be a creative coordinator is very exciting to me, and to maybe take this to the next level — because it’s already great — is exciting, too. We’re planning this big event next [winter] that I’m going to be part of — I’ll be writing the first thing — and we’re just going to up the stakes and really make some things happen and pop with these characters that are already really great. 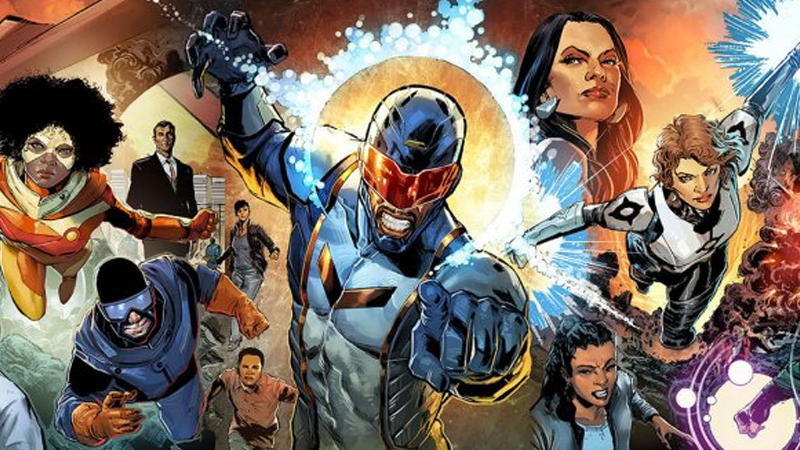 A look at most of the major players of the Catalyst Prime universe. (Image: Phil Jimenez, Lion Forge)

Of the characters in the Catalyst Prime line, who speaks to you most?

Simone: I know I’m going to be writing a new character, so that’s what’s going to be happening with me at the end of all this, and co-writing with the event that’s coming up next [winter]… but I love the writers that are on there. I don’t feel like they need me to be writing there. But like I said, we’re going to create a new character and I’m very excited about her.

Where is your head as far as potentially breaking in new talent?

Simone: It’s hard to get a regular flow of work from the Big Two regardless of your reputation or talent. Just because it’s a constant turnover.

But the thing I think is attractive about Lion Forge is because it is open to new ideas and ways of looking at things. And the characters haven’t been around for 60 or 70 years, so they’re created for the audience today and to grow with them into the future. And that is exciting, and I think that’s exciting for creators, too.

You have a Plastic Man miniseries coming out now from DC. Where did that project start?

Simone: Actually, I’ve been wanting to do Plastic Man forever. It’s like, no secret that’s a character I want to do. So when DC decided they wanted to do a miniseries for Plastic Man, they came to me and asked me if I was interested and I said, “You know I am.”

I always ask what content level are we looking at with this book, because that tells me where I’m going to gear the content to. Dan DiDio said he really just wanted to push the envelope, and I think that’s perfect for a character like Plastic Man. He can work for younger readers and everything, but there’s just too much potential for going over the edge with that character.

And so, I had a blast writing it. And seeing the art executed — it’s just hilarious. And dark. It’s both, you know?

I like your take. So many people have the cartoonish version of the character in their head but he was a criminal, a guy who doesn’t give a fuck. There’s two sides to a character like that.

Simone: Yeah, and I really love Jack Cole’s creation of him, so I wanted to honour that as well and keep it in the tone — a little bit grim in the underbelly there — I think that works because it balances out the absurdity of his power.

Someone with a different personality and background would use that differently, but I think Plastic Man, you know, it makes sense to me that it’s a little off-colour at times.

When do you estimate your fingerprints on the Catalyst Primeline are going to be felt?

Simone: I think it’ll be felt pretty full-blown by next [winter], when the huge event happens. I’ll be co-writing the lead book on that. And when we come out of that, we’re going to see a different iteration [of this universe].