On Saturday, two YouTubers stepped into the ring to settle their differences with their fists. The whole thing was an obvious farce, a phony showdown between two guys who weren’t even pro fighters. But for a large subset of YouTube fans, it felt very real.

This weekend’s fight saw YouTubers Olajide “KSI” Olatunji and Logan “The Guy Who Did The Suicide Forest Thing” Paul square off in a six-round boxing match in Manchester, England.

The event itself looked and felt like a proper boxing card, albeit one with some seriously questionable fighters on its line-up. When it came time for Paul and KSI to face off, the two entered the ring in gaudy robes and then got down to business. While Paul started strong, he fell apart due to exhaustion, allowing KSI to pull ahead in later rounds. In the end, the fight was declared a draw.

Was it a good fight? No. Was it violent, crowd-pleasing, and a fittingly sloppy end to months of manufactured drama? Yes. For better or worse.

The fight came after months of build-up. In February, KSI blew out another YouTuber, Joe Weller, in a match that turned YouTube boxing into A Thing. That match, the result of several soap operas’ worth of pre-fight drama, snagged 1.6 million live viewers and millions more in the days following.

When KSI won he called out Logan and Jake Paul, the former of whom was freshly disgraced after crassly filming a suicide victim’s dead body in Japan. The ensuing controversy led Logan to take a brief hiatus from video-making, followed by a cringe-inducing comeback tour.

He tried to paint himself as a changed man, a sensitive soul on the road to redemption. Early efforts—such as when he interviewed a bunch of suicide experts—came off as inauthentic. Then came KSI. KSI’s challenge gave Paul and his fans a new narrative to latch onto, and that’s exactly what they did.

The two proceeded to go back-and-forth, first in a protracted drama about whether or not the fight was even gonna happen, and then in a series of excruciating press conferences. They also released diss tracks aimed at one another. “Make him missing like I’m Thanos clicking,” said KSI in a video that included him sitting next to Paul’s head on a platter and flipping him off with the Thanos gauntlet.

And of course, they sold ample merchandise. The two quickly became the talk of YouTube, with video makers from all corners of the Internet weighing in on the impending slugfest.

What began as a cobbled-together rivalry between two mouthy YouTubers quickly evolved into a clash of fan bases. To Paul’s fans—who wanted to forgive him after spending so many hours watching his vlogs every day—he was the hero. To KSI’s fans, Paul was an insensitive arsehole who still hadn’t gotten what was coming to him, and KSI’s fists were a convenient vehicle for those just desserts to reach his big, dumb mouth.

For all YouTube’s claims that it’s trying to move away from shallow, drama-centric content, KSI vs Logan Paul was a runaway success.

Over the weekend, around 1.5 million viewers – about half for $US10 ($14) apiece on YouTube, and the rest illegally on Twitch – watched the fight live. The fight’s ratings beat out some of the biggest pro boxing matches of 2018.

On the stream, the lights came down on a boxing ring in front of a packed house. Michael Buffer, perhaps the most recognisable ring announcer in boxing, introduced the combatants. Even without his usual enthusiasm—at times it sounded like he was officiating boxing’s funeral— his mere presence lent the whole thing an air of legitimacy. It looked like a real boxing event. It sounded like a real boxing event. 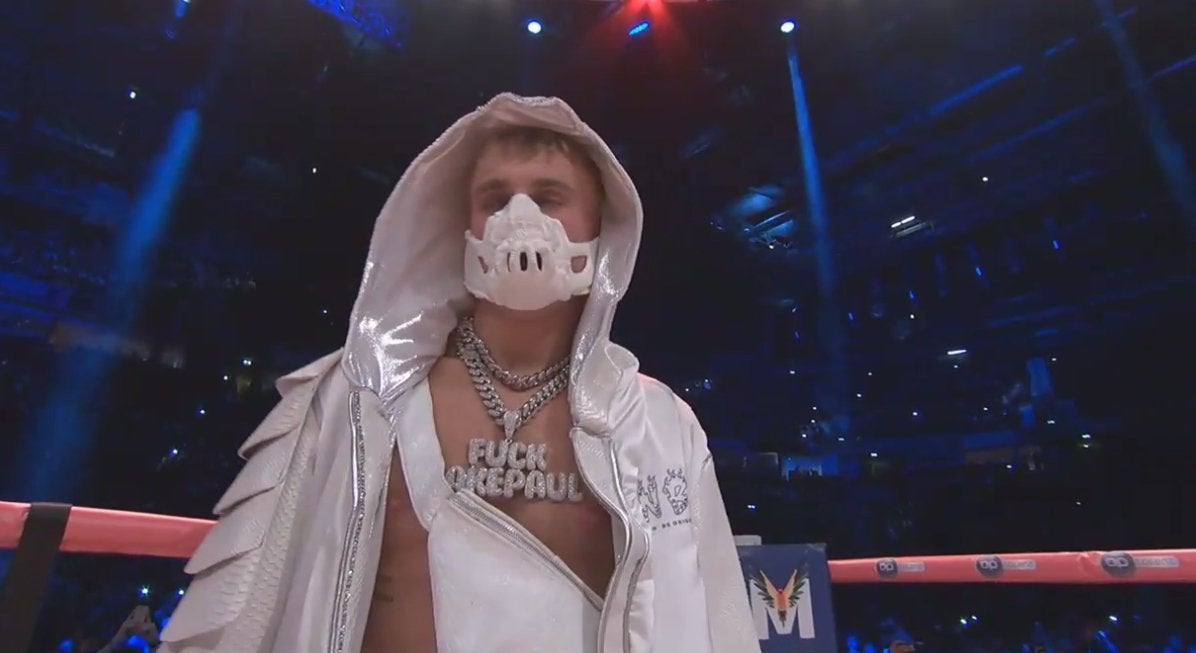 Then the fighters came out, and it turned into exactly what people expected to see: a shitshow. The main and co-main events of the multi-fight card were smartly calculated family affairs. Before Logan and KSI got it on, Logan’s brother Jake and KSI’s younger brother Deji shared the ring. Jake walked out wearing an outfit that was less a robe and more a blinding white costume that somehow fused Bane from Batman, a Power Ranger, and a Sonic The Hedgehog fan character. Deji wore a more traditional but also much more sequined robe.

Early in the fight, Deji broke Paul’s nose with a labored blow. The Manchester crowd, thick with fans of fellow Brit KSI, went wild at the sight of a Paul brother’s blood. Before long, however, Jake and Deji wilted and resorted to winging looping hooks until Deji’s corner threw in the towel. Jake, the victor, used his post-fight interview to announce a clothing line, then to challenge Chris Brown to a boxing match. Yes, that Chris Brown.

With the little brothers out of the way, it was time for the main event. Logan walked out to the ring looking every bit the bizarro Sephiroth-Bane devil to Jake’s innocent Cloud-Bane angel. Fans cheered and jeered.

If nothing else, it was obvious that Logan put in plenty of gym time, as he appeared to be chiselled from the meathead equivalent of marble. He got off to a surprisingly strong start against KSI, sticking him with a quick jab and dropping his hands to taunt his slightly more experienced foe. As the rounds wore on, however, Logan got tired, and not long after, so did KSI. The final three rounds were a sweaty, fumbling mess—part-brawl, part-extended death hug.

But again, by that point, it seemed a safe bet that most viewers had gotten what they wanted. It had been a real fight, with real violence. Two YouTubers who’d verbally gone at it for months had actually come to blows.

In the end, the fight was ruled a draw. A rematch between KSI and Paul had already been agreed upon before this first match ever happened.

YouTube and Twitch, meanwhile, both made millions of dollars off a thing they never talked about, and that YouTube indirectly said it was trying to get away from. As these platforms move into the mainstream limelight—from bedrooms to boxing rings—drama and tribalism continue to rule the day.

The real winners of this shameless spectacle, of course, were KSI and Logan Paul. Yeah, it ended in a fight, but make no mistake: this was a collaboration. It was a goldmine of a moment neither man could’ve exploited on his own. Logan’s shifted to a new narrative and completed a major leg of his redemption arc, and KSI’s created a business model he can repeat endlessly. 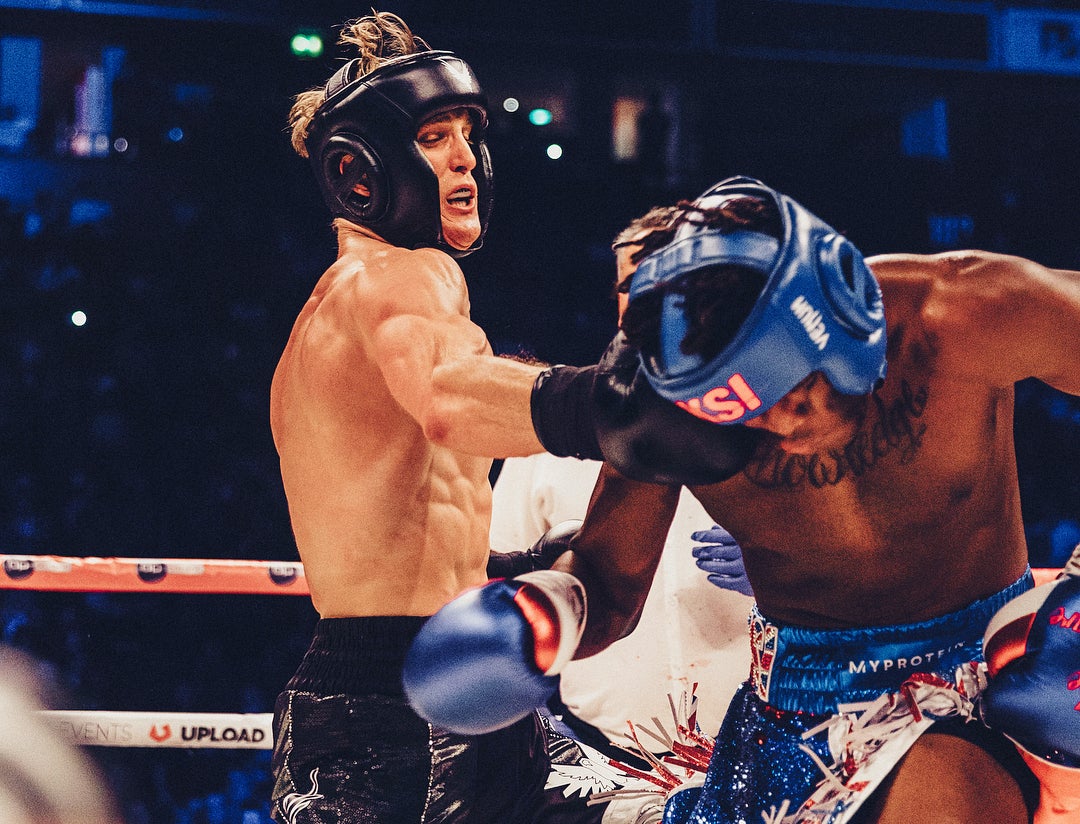 The sloppiness of the KSI-Paul bout dovetailed nicely with YouTube’s performative brand of authenticity. These weren’t pros. They were just tough guys who’d trained for a few months, and now they’re throwing down. I lost count of the number of times I heard the word “heart” get thrown around, but that’s basically the fight world’s synonym for authenticity.

Yeah, a fighter might eat half-a-million punches, but they didn’t go down or give up. They’ve got heart, and that’s what counts. It’s perfect for YouTube fans, who already believe they have a window into their favourite YouTubers’ hearts and minds. Now they get to see into their guts, too. They get to see what their heroes are like when they’re pushed to their absolute physical limits.

Fights are a magnificent narrative tool. For all the posturing nonsense during the lead-up, it’s all building toward the fight itself—a pivotal moment when everything can turn on a dime. Before he steps into the ring, Logan Paul can be a reviled dingus, a joke.But then he gets in there and slugs it out.

He lays it all on the line; he fights with heart. In that moment, he transforms. He sheds his career-ending scandal like a cocoon. And once the fight is over, the story’s keeps unfolding. He and KSI can pretend to be bitter enemies leading up to the throw down, riling up their fan bases and selling gobs of merchandise in the process,but after the final bell, they leave it all in the ring.

In the weeks to come, they could squash the beef, or fight their planned rematch, or team up against a new foe. They can do pretty much anything they want.

Look at absurd boxing cash grabs like last year’s fight between Floyd Mayweather and Conor McGregor. Heck, look at the whole modern UFC, whose pecking order is increasingly decided not by merit or victories, but by spectacle-driven “money fights” and beefs.

Combat sports are backing into YouTube’s model just as YouTube pulls into boxing’s driveway. It’s something pro wrestling has known for decades: after watching two people insult each other (and each others’ mums and girlfriends and manliness and every other tired cliche), it’s damn satisfying to watch them punch each other in the face.