super smash bros. melee
To sign up for our daily newsletter covering the latest news, features and reviews, head HERE. For a running feed of all our stories, follow us on Twitter HERE. Or you can bookmark the Kotaku Australia homepage to visit whenever you need a news fix.

Ontario Super Smash Bros. Melee player Vikram “Nightmare” Singh has been banned from attending a number of Canadian tournaments after a friend described Singh’s alleged past sexual relationship with an underage girl and a supposed criminal charge that followed. The ban comes on the heels of several tournament organisers’ adoption of a Smash code of conduct, which provides a process by which to investigate claims of misconduct by community members.

Since April 2018, a committee of Super Smash Bros. players known as the Harassment Task Force have been collaborating with a handful of event organisers on a suggested code of conduct for tournaments, the final version of which was released on September 11.

One event organiser, Canada’s Even Matchup Gaming, announced plans to adopt these guidelines at “all future events” on September 25, further explaining that the new rules would affect Singh, who “will be indefinitely disallowed from participating in tournaments affiliated with or organised by Even Matchup Gaming.”

The Harassment Task Force first addressed the notion of player bans in a SmashBoards posting this past July 12. While updating the community on the group’s progress, project manager Josh “Roboticphish” Kassel mentioned that some tournament organisers were hesitant to sign off on any official code of conduct before establishing the legality of banning someone from attending their competitions.

This sticking point, Kassel continued, had precedence: a player who “is currently accused of the grooming of a minor and sexual assault … has hired a lawyer on retainer who has threatened to litigate against any tournament who tries to bar him entry into their event.” Kassel went on to say that “the victim has opened a criminal case against this person,” and then acknowledged how this would affect the Smash community: “While it is obvious that the community should want to bar him from all events, the very real and serious threat of litigation is far too much for any tournament to afford,” he explained.

“Tournaments already strain and struggle just to break even; defending against a $US20k defamation lawsuit would bankrupt every tournament organiser in the world.”

Kassel did not name the player in question. However, Melee Stats reports that on July 16, Singh posted a letter from RZCD Law Firm LLP. Singh has since made his Twitter private, but the letter that he posted at the time denied the specific allegations being levelled against the unnamed player in the SmashBoards post: “If the postings are intending to refer to Mr. Singh, which we believe they are, the postings are false.” 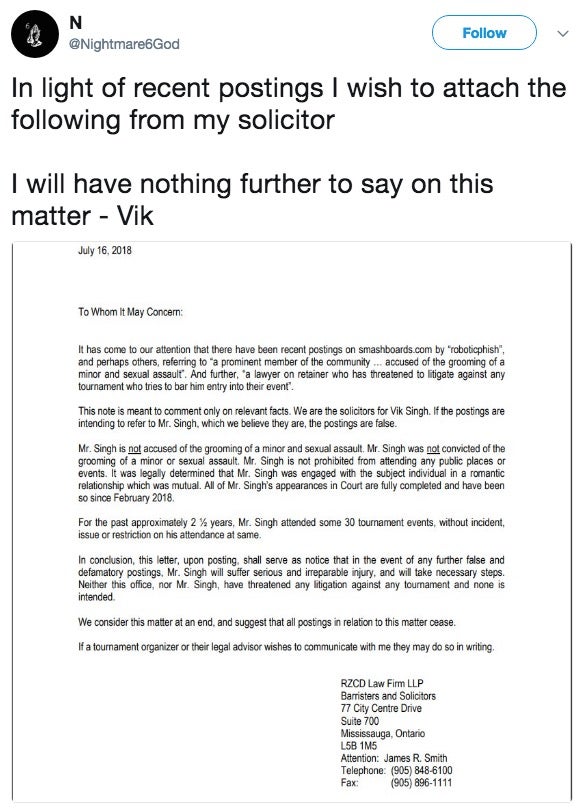 The letter continued: “Mr. Singh is not accused of the grooming of a minor and sexual assault. Mr Singh was not convicted of the grooming of a minor or sexual assault. Mr. Singh is not prohibited from attending any public places or events. It was legally determined that Mr. Singh was engaged with the subject individual in a romantic relationship which was mutual.”

The law firm’s letter concluded by stating that they would take “necessary steps” to combat “any further false and defamatory postings” about their client.

Singh continued to attend Super Smash Bros. tournaments after this, most notably DreamHack Montreal in September. A weeks-old episode of the Melee Stats podcast and a recent report from GameTyrant made reference to the fact that Singh attended and competed at DreamHack, but did not appear on the event’s video stream.

During Singh’s matches, the stream feed would cut out, leading to a conspicuous gap in the broadcast. Brackets show that Singh did in fact attend Dreamhack Montreal, participating under the truncated handle “N” and placing 13th in Melee singles (the bracket entry for “N” lists Singh’s Twitter and Twitch handle).

He also took part in a losers finals match during the doubles tournament that would have fit into the aforementioned gap, but Kotaku has not been able to independently confirm the reason for the gap in the stream.

In response to ongoing coverage of the issue, Singh’s friend and fellow competitor William “Trulliam” Truong hosted a Twitch stream on September 25 to address the topic. The archives have been removed due to Truong’s permanent ban from the platform, but Smash community member Joe2D shared a short clip he was able to capture, which shows Truong stating that Singh “fucked a 15-year-old.”

Truong then pushed back on the allegation that Singh had done so by force: “They had consensual sex, yes. That’s what happened … Did he do it by force? No.”

Truong provided further details about Singh’s situation on YouTube, saying that, in 2015, Singh had been charged with sexual interference, a crime that the government of Canada describes as follows: “Every person who, for a sexual purpose, touches, directly or indirectly, with a part of the body or with an object, any part of the body of a person under the age of 16 years.”

Truong also said the victim in question accused Singh later of grooming and sexually assaulting her.

Later that same day, Even Matchup Gaming announced that they would be adopting the Harassment Task Force’s code of conduct, and as such banned Singh from tournaments they run or are affiliated with, which include Get On My Level, one of Canada’s biggest Smash gatherings, and Canada Cup, a traditional fighting game event that also hosts Smash competition.

“The creation of community-approved guidelines to handling issues of this nature has provided us with the basis and led us to the conclusion that action must be taken now, despite the legal grey areas of the situation explained in his lawyer’s statement,” Even Matchup Gaming’s statement reads, alluding to claims by the Harassment Task Force that someone had previously mentioned pursuing legal action against tournament organisers in the event of a ban.

Evan Kubes of the MKM Group, a Canadian law firm and management agency specialising in esports and content creation, told Kotaku that Singh would find it difficult to succeed in such an endeavour unless he had previously signed a code of conduct that made no mention of the specific actions he took outside of a tournament setting.

“He may however have more success suing for defamation, slander, or libel, which are established causes of action in many common law countries (including Canada and the United States),” Kubes continued. “Of course, his success will depend on the evidence that comes out at any trial, should one be held.”

The lack of an overarching esports governing body means that the creation of codes of conduct often falls to teams, developers, and tournament organisers. Due to Even Matchup Gaming adopting the Harassment Task Force’s code of conduct — which includes language allowing events to ban players found guilty of sexual assault, offences involving minors, and criminal behaviour — Singh would likely be subject to these guidelines upon registering for their events.

“It is ultimately up to individual tournament organisers to decide who is allowed to participate,” MKM Group partner Josh Marcus added. “It’s unlikely that a claim [from Singh] would succeed, in our opinion and given the facts that we know. For all we know his lawyers could find another case of action to sue under (maybe he was discriminated against for another reason, maybe this was a pattern before the allegations came out, etc.).” 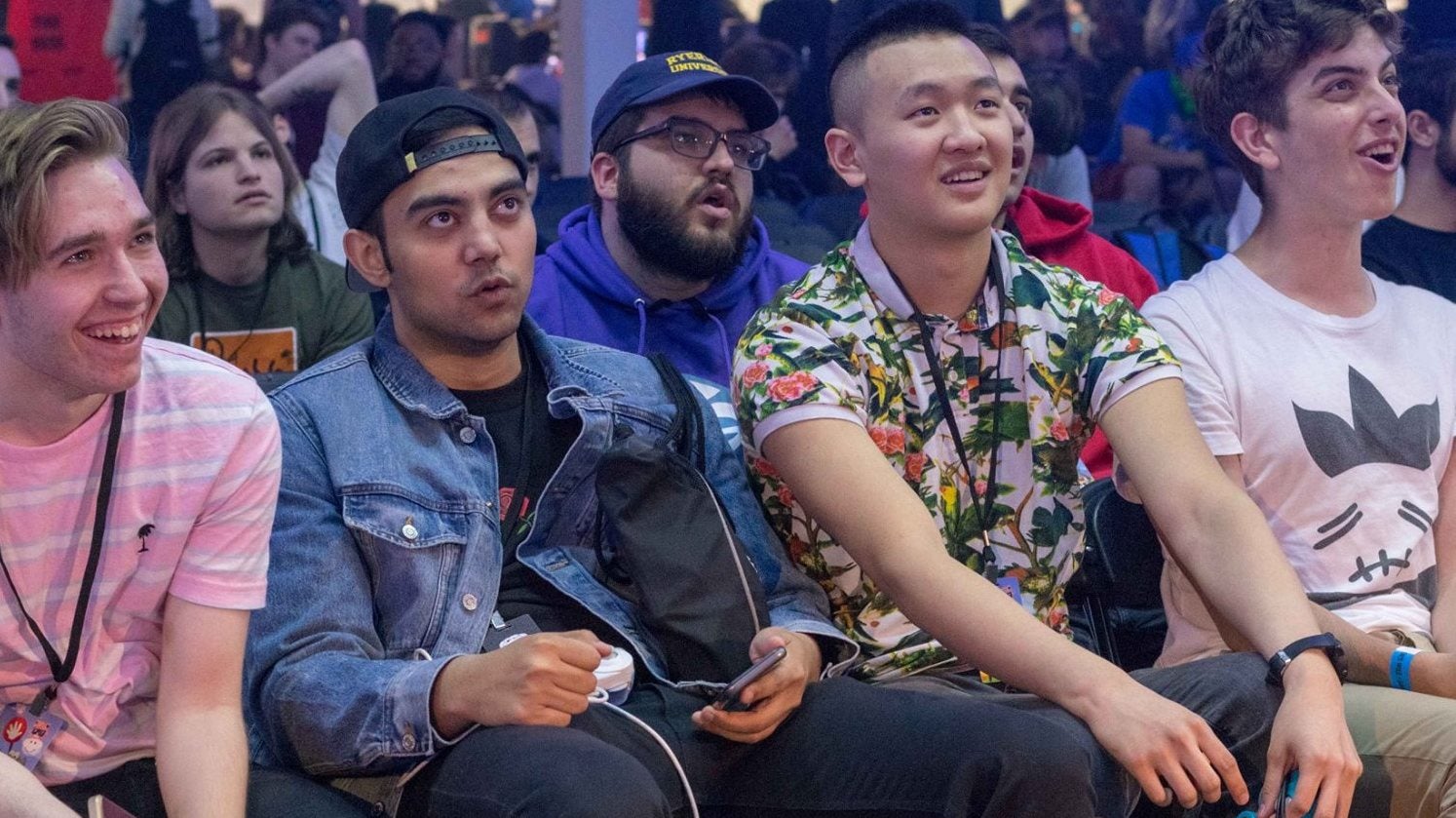 Numerous tournaments have adopted the Harassment Task Force’s code of conduct, including but not limited to major Smash events like The Big House, Genesis, and Shine.

Josh Kassel would not speak to Kotaku about the Singh situation specifically, but he did state that community support for the committee’s work has been “overwhelmingly positive,” and that they encourage victims, witnesses, and tournament organisers to reach out to them directly for guidance in the future.

“The goal is to make sure anyone who feels they are the target of sexual crimes of misconduct, harassment, assault, etc. knows that they have a place to go,” Kassel said.

“The investigations will be done behind closed doors to protect both the victim and the accused from the court of public opinion, and the people investigating claims of misconduct are being carefully selected and trained based on their ability to be as impartial and compassionate as possible.”

Vikram “Nightmare” Singh, his law firm, Even Matchup Gaming, and DreamHack were all contacted without response over the course of researching this story.