The New Transformers Trading Card Game Is Kind Of Magical

Giant transforming robots deserve giant trading cards, and they get them in the new Transformers Trading Card Game. Hasbro tapped Wizards of the Coast to give the Autobots and Decepticons a new way to battle, and it’s slightly more than meets the eye.

It’s kind of a slow rollout for the Transformers Trading Card Game. There are no pre-built decks, and the card selection at launch is pretty modest, with 81 battle cards and 40 double-sized character cards to collect in the first wave.

A Quick Playthrough Of The New Transformers Card Game

Later this week, Hasbro will officially launch the Transformers trading card game. It's a pretty straightforward affair. pick a team of bots and bash them against each other until one player is done. The official Transformers account has been revealing some of the cards and characters over the last week. One of those cards is being revealed right now, but Amanda and I took some time to get hands on with the game as well. 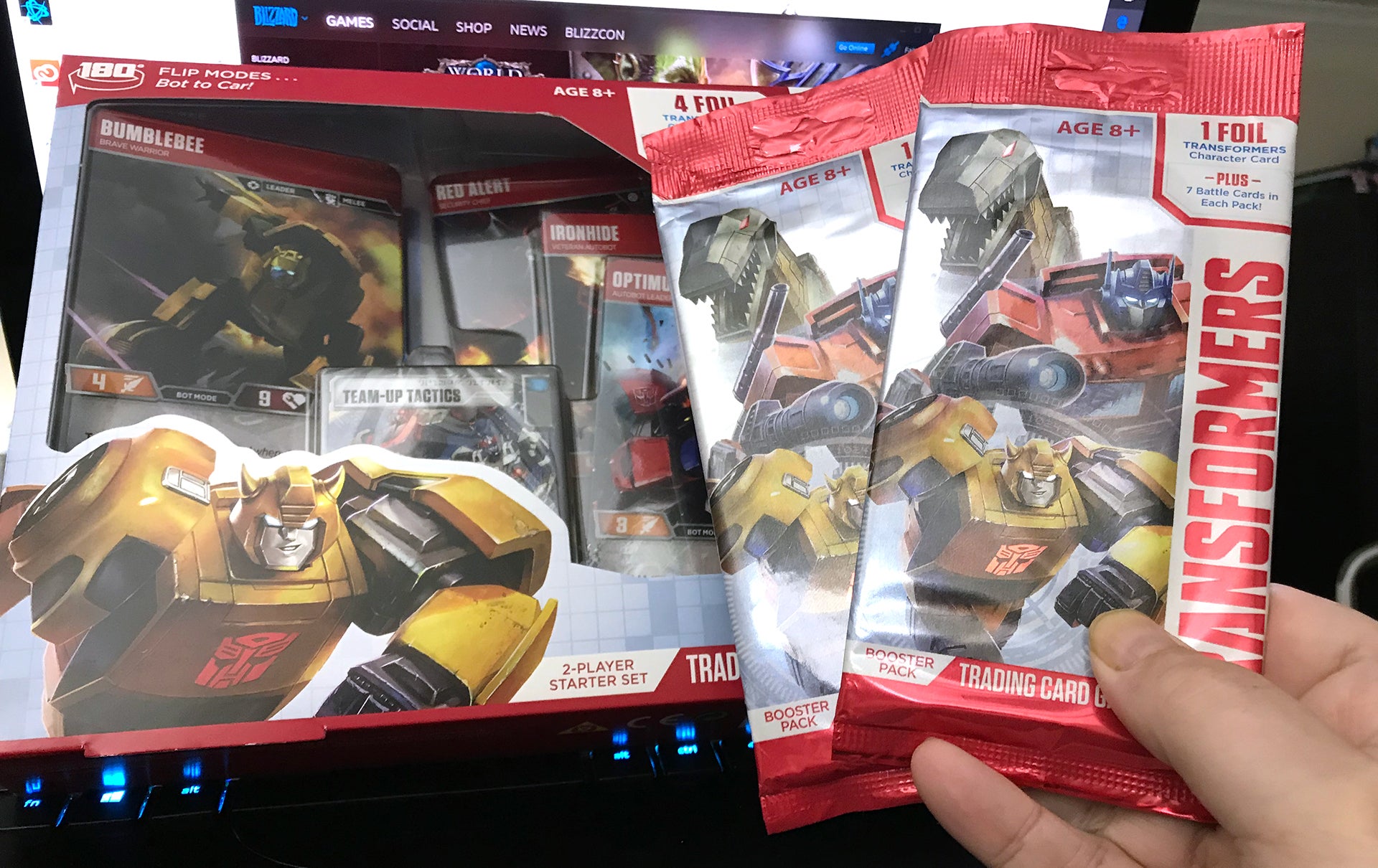 It’s kind of silly, how big the booster packs have to be to accommodate a single character card.

If the defender’s defence is lower than the attacker’s strength, damage tokens are applied. The winner is the first player to defeat both of their opponent’s bots. 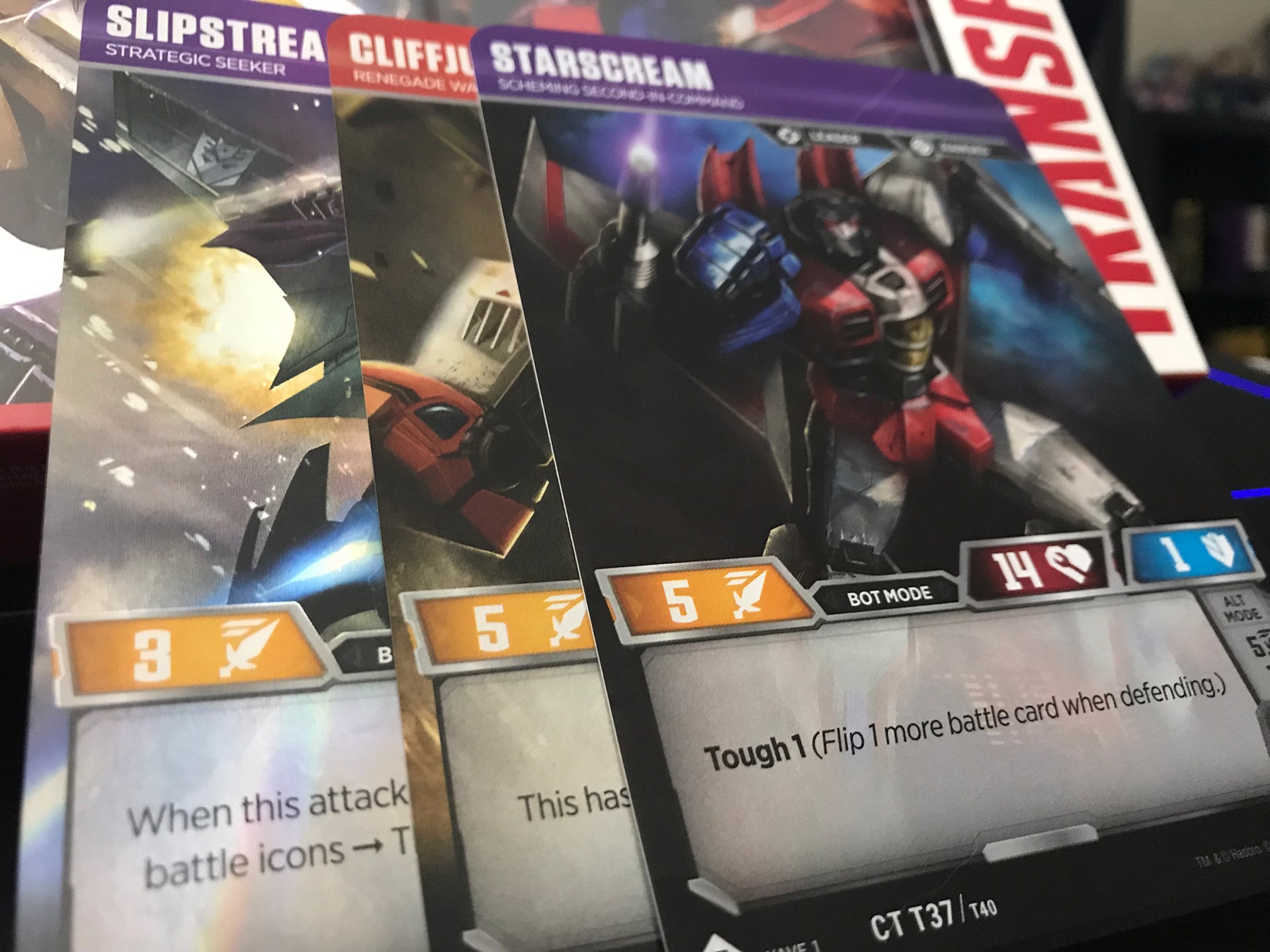 Starscream is tough, so when he is defending he can flip one more card, but the player defending has to wine about not being appreciated by Megatron. Pretty sure that’s an official rule.

That’s the basics, but as I said, there’s more to the game than meets the eye. For example, once per turn each player can transform one of their characters from robot to alt mode or back. Here’s Chop Shop’s robot form: 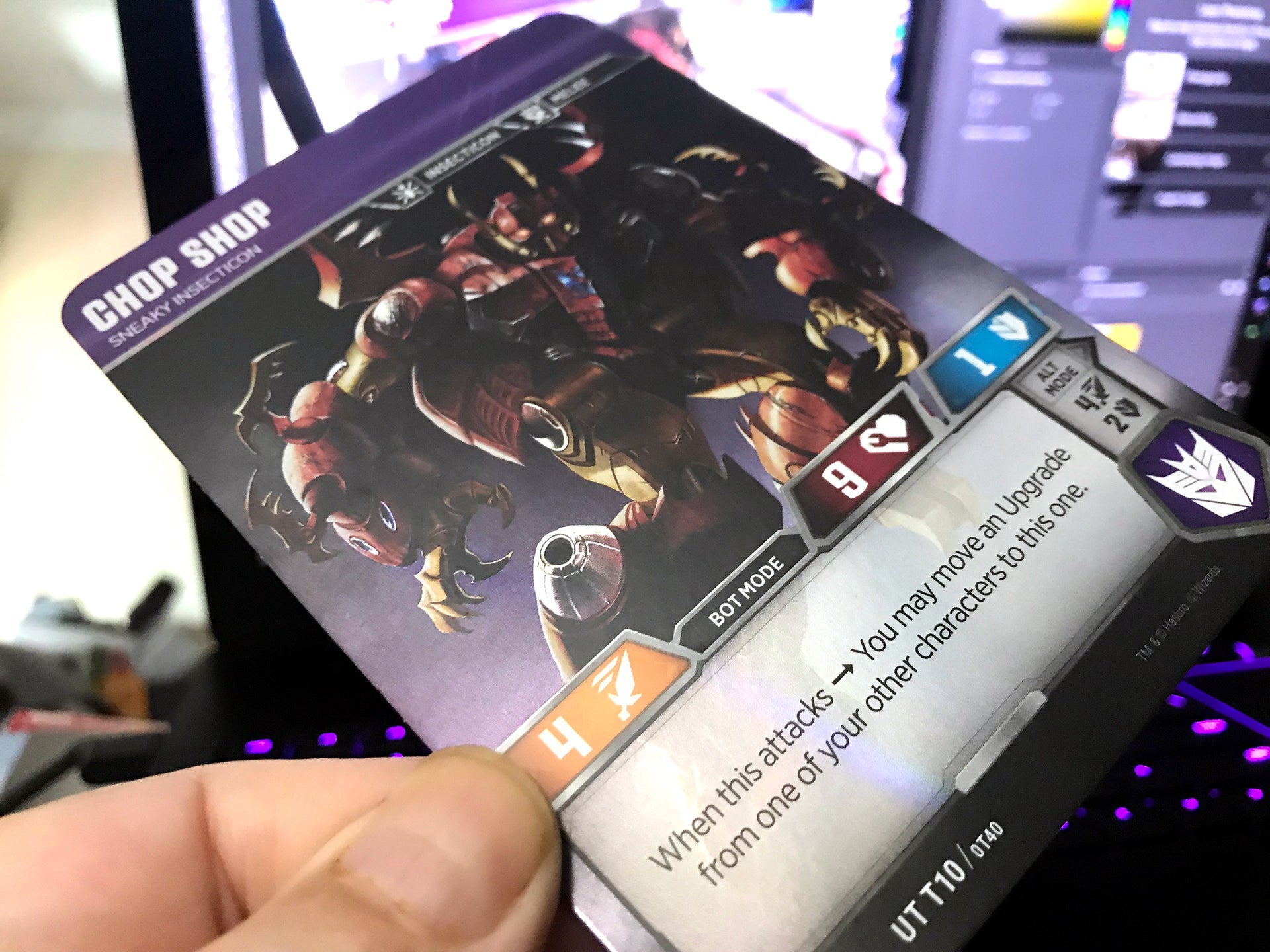 One of those fancy Insecticons.

And here is his alt mode: 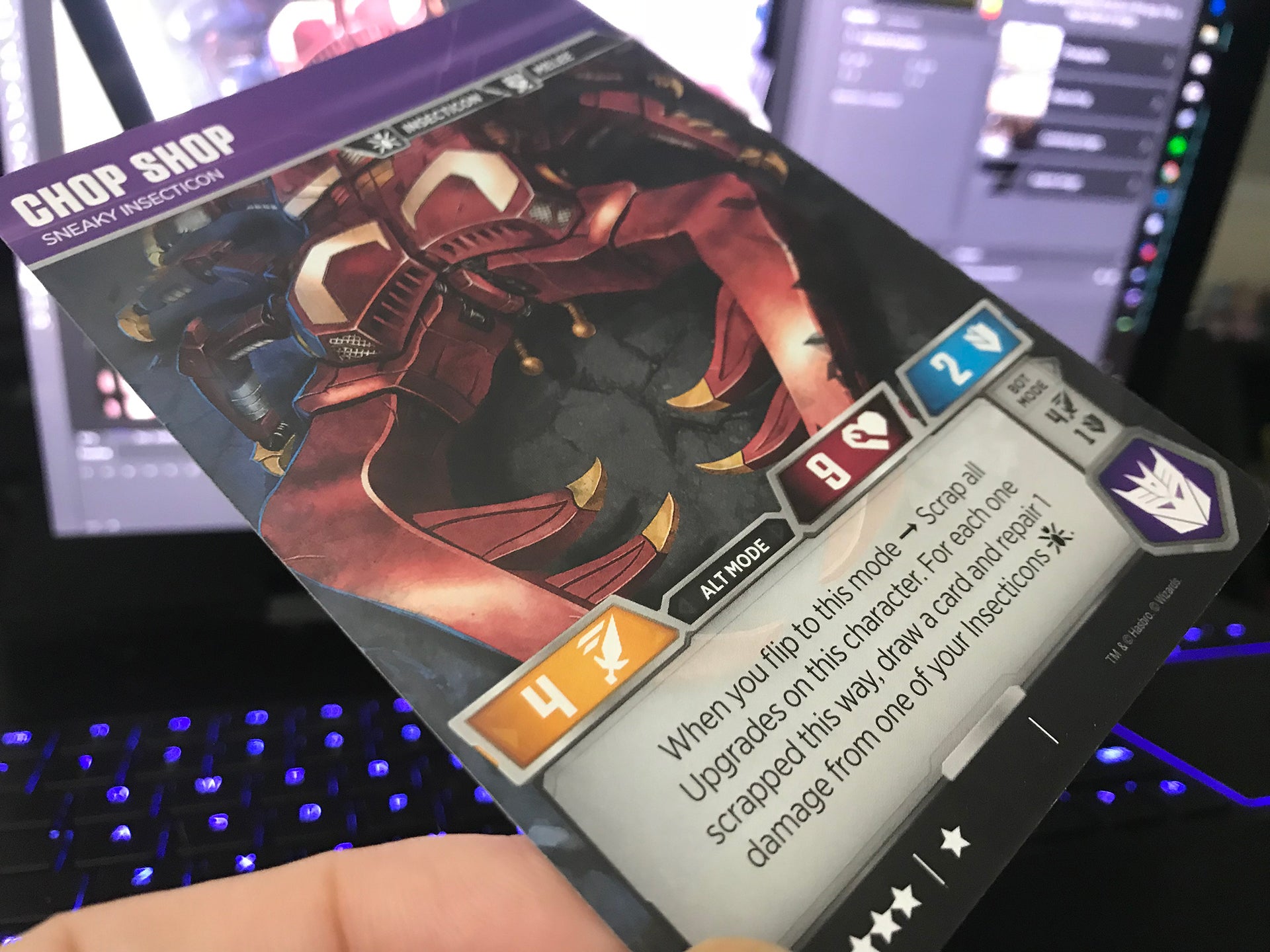 Chop Shop always creeped me out.

Note the alt mode has a little more defence and a different power than robot form. As a bug, Chop Shop loses any upgrade cards placed on him, but salvages those cards into repair for his Insecticon brethren. I smell a bug theme deck cooking. 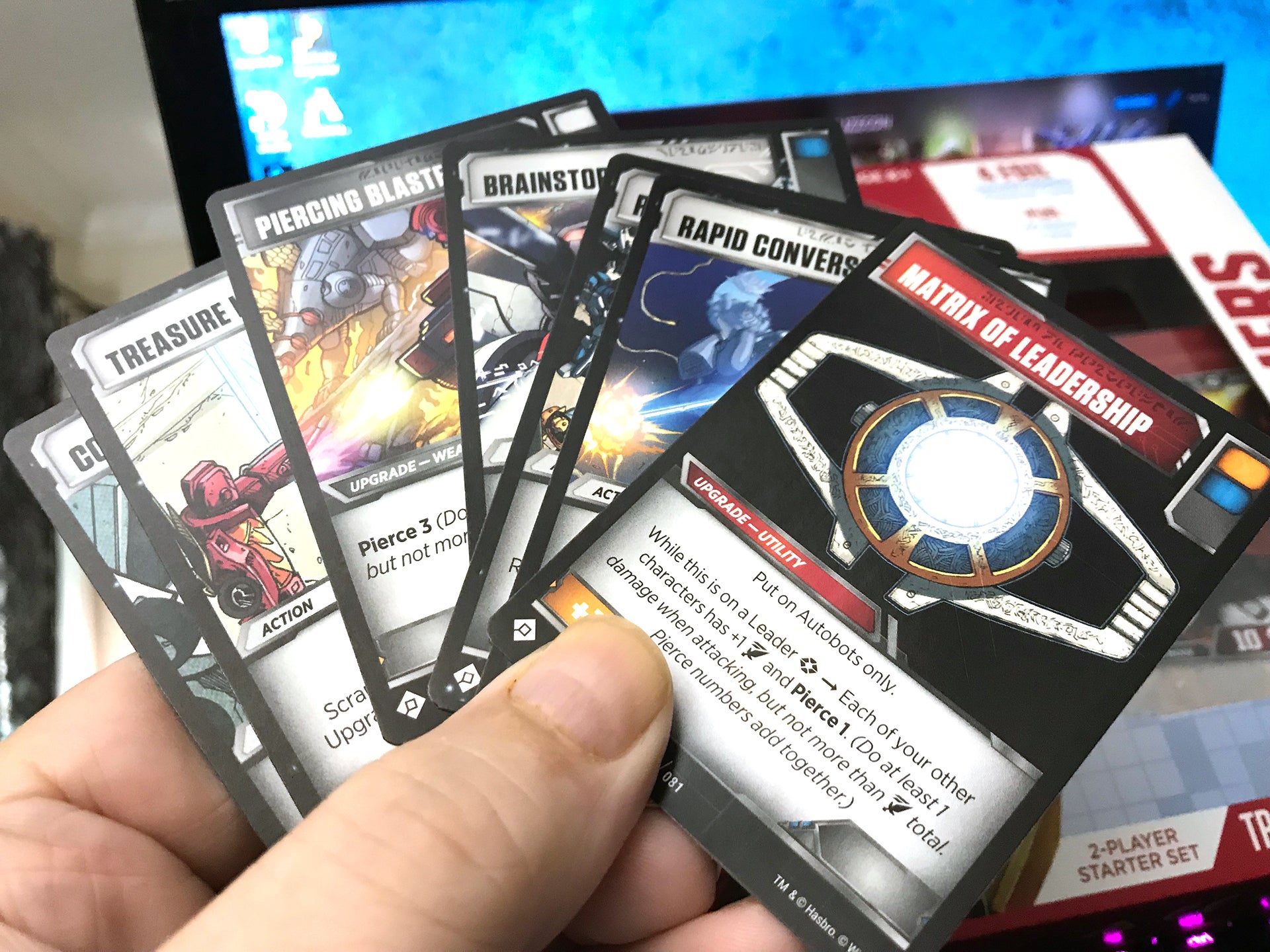 Each turn players also get to draw new cards into their hand, which is full of actions and upgrades. Actions are instant effects (draw cards, scrap cards, repair damage), while upgrades enhance a character’s armour and weapons or add utilities (special abilities).

Each player can apply one action and one upgrade per turn, though a character may only have one of each upgrade type at a time. You can check out all of the rules at the game’s official website.

Flipping through the cards I’ve collected so far from my two boosters and the Autobot starter set, I’ve already got some ideas about the sort of deck I want to build. There’s a lot of room for strategy here, though I am eagerly awaiting new sets to add to my collection. Can’t the Decepticons get a little love?

My only worry about the game is those giant-sized character cards. As a collector, how am I supposed to fit these in a binder? And to make matters worse, next month’s Metroplex set has a character card that’s nearly eight inches tall. I am going to need a bigger binder. 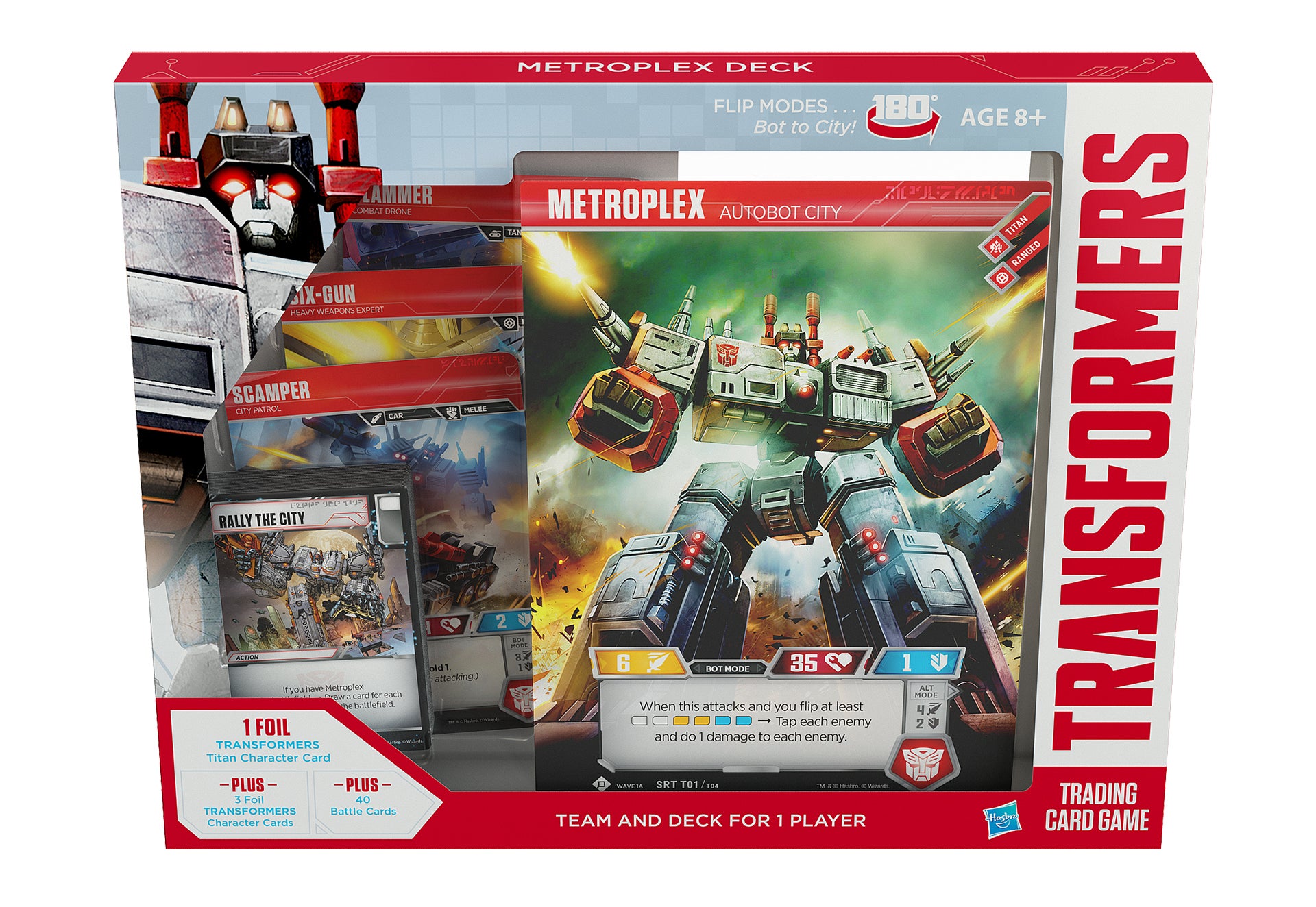