A 39-year-old man has been arrested in Ibaraki Prefecture, Japan for allegedly customising and selling an unauthorised customised anime figure. 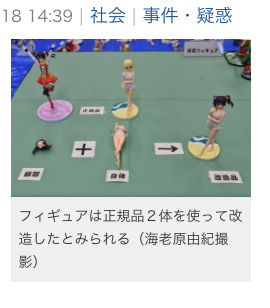 According to The Sankei Shimbun and Mainichi (via ANN), the man allegedly took the head from a Love Live figure of character Nico Yazawa and put it on the body of a Darjeeling figure from Girls und Panzer Darjeeling (see photo), violating the characters’ copyrights. Why? In Japan, holders of said copyrights licence official figures and those who sell customised versions thereby violate that.

The unauthorised figure was reportedly sold at an online auction for 3,000 yen ($38) last fall and discovered during a “cyber patrol.”

Authorities recovered around 1,000 figures from the man’s house and are investigating questionable deposits totaling around $US77,000 ($107,877).

The suspect has confessed to the charges, admitting to selling the figure to help make ends meet.