A New Graphic Novel Explores How Racism Made Weed Illegal

For the last few years, a wave of legislation has been decriminalising the recreational use of marijuana all across the United States.

Cannabis advocates have long said that it should never have been illegal. The story of how the substance became outlawed in the first place combines willful ignorance, petty careerism, and good old-fashioned racial prejudice.

In the newly released Cannabis: The Illegalisation of Weed in America, cartoonist Box Brown looks back through history to see how cannabis came to the U.S. and how two of history’s most powerful nations worked to create a narrative of fear and immorality around the drug.

Drawn with Brown’s signature puckish minimalism—previously seen in his books on Tetris and Andre the Giant — Cannabis time-travels across continents to track how European colonisers and indigenous peoples clashed over weed’s role in society.

This white-vs-brown struggle created a cyclical dialectic that would reach a fever pitch in the Reefer Panic of the early 20th Century, mutating into the War on Drugs in the 1980s.

I spoke with Brown on the phone while he was on a book tour in Seattle. An edited and condensed version of our conversation follows below.

io9: The way you string all these historical moments together it makes the case that the story of reefer panic throughout the ages is really one of weaponised racism. Were you surprised to find out how far back these attitudes went?

Brown: It’s funny, going back and doing the research, it’s clear that the War on Drugs in the ‘80s were racist laws. But, when you see similar attitudes when Britain colonised India, you understand that the whole point of these laws was to control who could use and profit from cannabis, all the way back from the beginning. And that was just sad. At first, I found it surprising, but by the end, it made sense.

io9: You explicitly tease out the cycles of repression of cannabis use that have been going on for centuries. In Mexico, India, the United States, and then globally as a result of the actions in the United States. A chief goal was curtailing the freedom and rights of non-white people.

Brown: Right. I think that the general population is not super-aware of how deep it goes. People kind of know about the ‘80s Ronald Reagan-era War on Drugs but I don’t know if they know how deep it goes. I think knowing this history can help people make decisions about the future of where legalization is headed.

In a lot of places, it’s on ballot initiatives. We’re literally making these decisions ourselves. If you think cannabis was something the hippies invented, and see it as a fun thing to do, then sure, legalise it, tax it, do whatever. I think if you know the whole history behind it, then you see what we’re emphasising with certain legalization proposals. 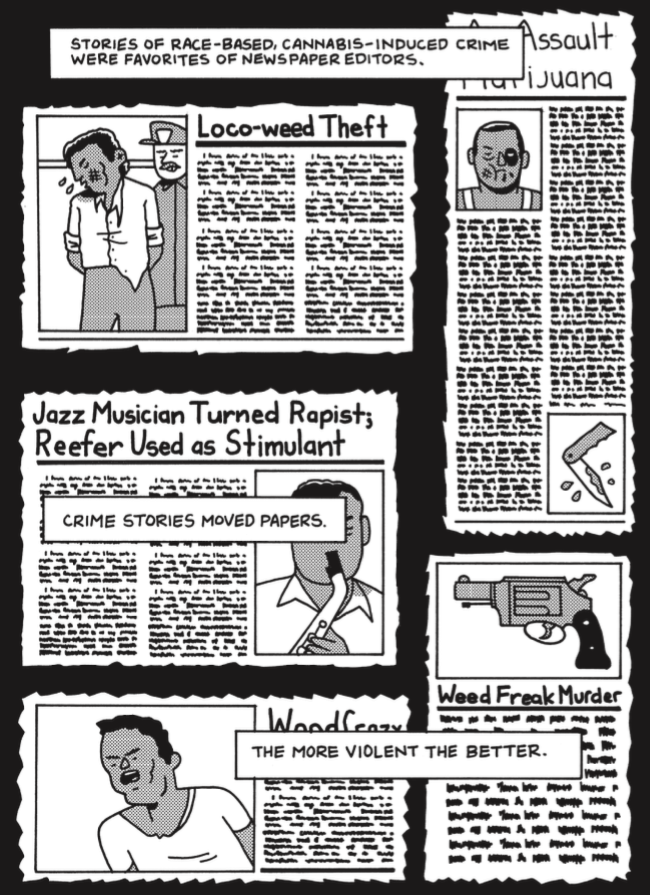 Are we emphasising the cash benefit to large corporations, which is what we’re seeing in the Jersey legalisation law and a lot of the East Coast medical laws.

These laws include things like, “If you’ve ever been arrested for cannabis, you can never work at a cannabis dispensary.” Not just start a cannabis business of any kind, but you can’t even work there in any low wage job. So, I think knowing the full history you’ll see this is more about social justice, not about money making.

Especially because this is a replenishable national resource, that, if it becomes fully legal, and there’s so false scarcity going on, the prices are going to come way down—so the prices of other things that are easy to grow, like tomatoes and other herbs like, oregano, for instance…

io9: It’s very much a story of economic stratification, too, you know? I remember being so appalled when John Boehner made the move to a corporate cannabis business. He’s a guy who made his political career off law-and-order bluster and demonising drug use and drug sales in poor inner-city communities, but now he gets to cash in…

Brown: These companies that are extremely politically connected like that are coming into states and writing the laws and setting it up so basically nobody that lives in the state they’re setting up the operation in is able to get even involved in the cannabis business. They make sure the laws, the licenses to grow, are extremely limited.

And so you have to be extremely wealthy and extremely connected. So, I think that if people really understood how much of a travesty this has been since the beginning, and how wrong this has been since the beginning, maybe we’ll see laws that might be able to correct that. Laws that legalise the whole plant. Laws that state whoever wants to grow it can grow. Not these vast monopolies popping up right away.

io9: The scientific studies you mention in the book—done over the centuries by British colonisers and American law enforcement—really don’t frame marijuana as a dangerous substance. Why do you think there was such a need to create a panic around it throughout history?

In El Paso, Texas in 1914, Mexican immigrants were coming north, trying to avoid war and looking for safety. The local government created laws that allowed the cops to harass Mexican people to jail and deport them. That’s all to make sure they know they’re not welcome. And so those are the first laws. It’s always been about that.

The laws never change. We see it happening over and over again. In the ‘30s with jazz musicians, there’s a lot of harassment of black and brown people, especially anyone involved in jazz, which was so scary to white people. 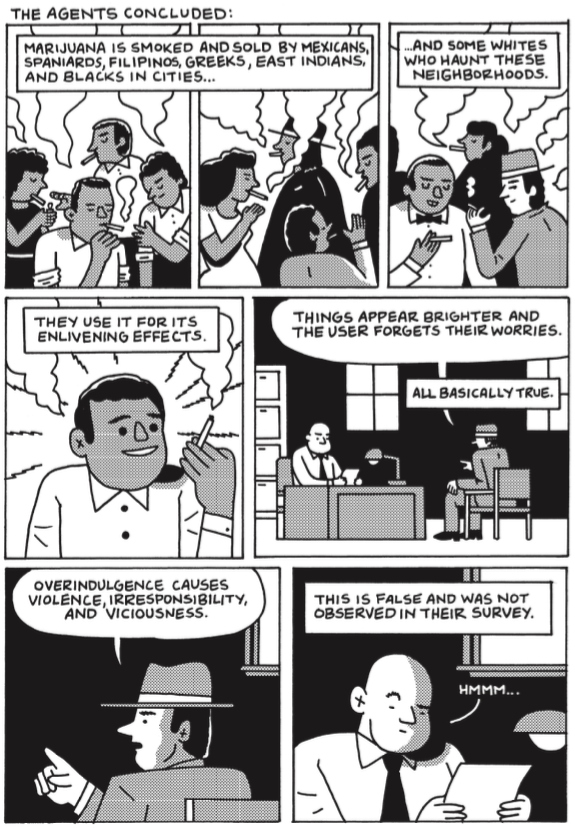 A scene that shows how a Federal Bureau of Narcotics report got slanted for political scare purposes (Image: Box Brown, First Second)

When cannabis becomes popular in the ‘60s and ‘70s, we see these same kinds of laws used to oppress and push down social movements and put black and brown people in jail, again. And we see it repeated again in the ‘80s and ‘90s. Under the Clinton administration in 1996, we saw arrests for cannabis double.

So, this has been the repeated thing over and over again. Now that we’re seeing legalisation happen, it’s great, but you’ve got to keep your eye on it, because it’s not like turning off a light switch, which is kind of how I thought it would be. A whole new power structure is coming into place.

io9: One of the things that you’re saying is that legalisation can be seen as, like, “oh, finally…” but also the methodology of various proposals could, in fact, further stratify who gets to use it, right?

io9: You spend a lot of the book on Harry Anslinger, the first Commissioner of the Federal Bureau of Narcotics. You posit that his whole campaign in the 1930s and beyond smacked of self-preservation and he created this panic to justify his own job. You cite a few examples, but did anybody call him out on this in a major way?

Brown: Only a very few people. It was a thing that was under the radar for a lot of people. Even as these laws were going through the House, or Congress, people were kind of unaware of what they were talking about.

Weed use still wasn’t even really as popular as they were making it out to be. It didn’t even affect a lot of people that voted on it, because it wasn’t an issue in their hometown or anything. It was all based on untruth. 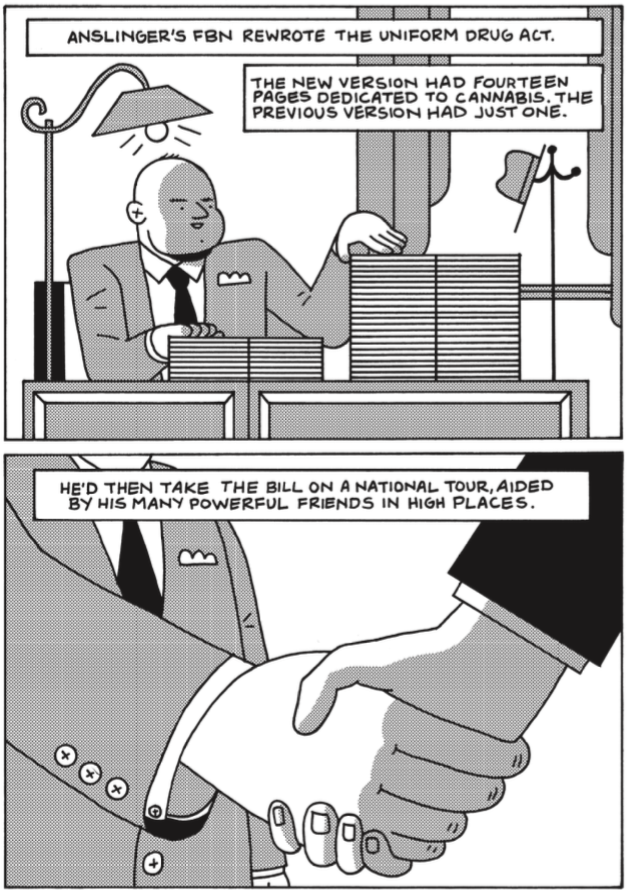 There was no real panic in the streets. There was no real danger involved where people were tired of getting attacked by psychotic marijuana smokers or something like that. It was all spurred by this movement and he used racism in such a way that people were very willing to jump in on it.

io9: Speaking of research, are you able to contrast the story of United States’s paranoid response to cannabis with the attitudes and policies in other countries?

Brown: Yeah, it was interesting because it was also happening in the UK at the same time. The biggest, most powerful countries in the world at the time were all following this same path but, it wasn’t spread across the world until the 1960s in the UN. So, there was this big push.

io9: That push, basically led by the United States, was to essentially outlaw it across the world. Was Britain different?

Brown: When Britain brought it up back in the 1800s, they were concerned about it. Because they had never seen it before. And I think the British were kind of afraid of the native Indian population the same way the Americans are afraid of the Mexican population. When the UK goes into India to colonise it and extract its natural resources, they want to make sure the native population is not going to be a problem.

And so, they were looking at the cannabis and people using it, and they wanted to know what it was all about. “Does it make people crazy?” But also, the big thing they wanted to do was figure out if it was dangerous. Then they’d know whether to outlaw it and use the laws to suppress the population’s use. 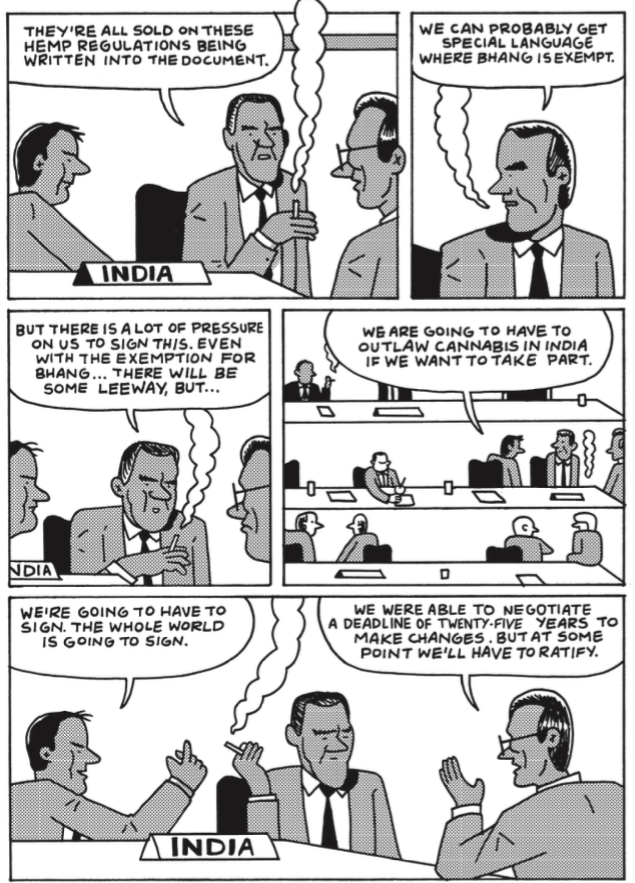 But if it was not dangerous, then they felt they had a moral high ground to start taxing it for the local population. So, you know, here we go, these are the two sides of the argument. Either we outlaw this cannabis and oppress the population, or we use it to make money off the local population. And I feel like today, it doesn’t have to be a binary choice here in the United States. It’s just something that is, that should be legal with no strings attached to it that way.

io9: Why do you think today’s opioid crisis is being framed differently, with less of a focus on criminality?

Brown: We kind of saw this change with weed, when it started entering white populations and suburban high schools more and more. The previous narrative was focused on writing restrictive laws because of a fear of the co-mingling of the races. But, part of the push to make it legal was no longer being able to say that mostly black and brown people are using this.

“White people use it so now we have to do something about it.” And its kind of the same thing with the opioid crisis, I think. Obviously, it’s a huge crisis and needs our attention, but it’s always been a medical and legal crisis and not a criminal crisis. I think it made a big difference when it came into the white suburbs.