Sekiro’s Smartest Boss Fight Is Against A Giant, Poop-Throwing Ape

There are plenty of tough bosses in Sekiro, from rival swordsmen to dangerous undead monsters. One of the best bosses sounds at first like it would be the silliest: a shit-throwing giant ape. But closer examination of this battle reveals a crash course on how to make a reactive and thematically interesting boss fight. It’s FromSoftware’s speciality on full display.

Sekiro tells the story of a shinobi (named Sekiro) and his quest to protect his lord Kuro. Kuro is also known as the Divine Heir, due to him having a blood connection to an ancient dragon that happens to grant him immortality. He shares this immortality with Sekiro, allowing the shinobi to fight through the nation of Ashina to rescue his lord.

Eventually, Kuro asks Sekiro to help him sever the ties of his immortality. To do this, Sekiro needs a special flower that can be found deep in the Sunken Valley. The Sunken Valley also happens to be home to the aforementioned amazing boss fights, a clash against the giant Guardian Ape.

They’re a tough, rampaging monster that can give players a lot of trouble. There are a lot of different tactics that can work well against this boss, though.

Sekiro’s combat encounters operate on a similar level to the ones in Mega Man, where using the right tool for each boss can turn them into pushovers. Firecrackers can scare both the Blazing Bull and Sakura Bull of the Palace and make them start running into walls, which will stun them and allow for a one-hit kill.

The ghostly version of the Corrupted Monk can be stunlocked by using Snap Seeds, which also drains the Monk’s health. Other bosses are weak to certain techniques, like how Genichiro Ashina crumbles when you turn his lightning attacks against him. The Guardian Ape doesn’t have just one neat weakness. Instead, there are numerous ways to gain an advantage.

Firecrackers can scare them into a frenzy, while oil and fire can burn them alight. While other bosses have more of a lock-and-key design, the Guardian Ape rewards player creativity by reacting in different ways to a variety of tactics. A major plot point involves retrieving the Mortal Blade, a weapon which can kill even immortal beings.

It’s also a playful fight, particularly in how it transitions from the first to the second phase. Most bosses in Sekiro have two health bars that you need to clear. The Guardian Ape only has one at first. If you deplete this bar, you perform a shinobi execution and cut off the ape’s head. After a moment, the ape rises again as a headless, sword-carrying monstrosity. It’s a cheeky subversion of expectations that takes many players unaware.

Once the Ape loses their head, different tactics become more effective. In the second phase, Phoenix’s Lilac Umbrella can negate the ape’s massive scream attack. (This attack can build up the ‘terror’ status effect and instantly kill players.)

If you stab at the boss with the loaded spear, you can pull out the centipede infesting the body. Between the raw challenge of the Ape, their tricky resurrection, and the way the boss reacts to so many different tools, this is one really well-designed fight.

The Guardian Ape is also a strong example of FromSoft’s storytelling prowess. Sekiro has many boss fights and encounters that aren’t always given much context. For every standoff against a fleshed-out characters like the dangerous general Genichiro Ashina, there are plenty of random battles against fire-horned bulls and dark magicians like the Shicimen Warrior.

The Guardian Ape seems arbitrary at first, but over time, items and events connect this boss back to individual character storylines and Sekiro’s broader themes. Like many things in a FromSoft title, there’s a greater context.

Ultimately, the Guardian Ape connects to the story of the Sculptor. At the start of the game, after Sekrio is defeated and loses an arm, the Sculptor provides a replacement. Over time, particularly if the player shares sake with him, we learn more about the Sculptor’s past. Specifically, we learn about his time as a masterless shinobi called Orangutan.

He and his partner would train in the Sunken Valley among the apes. His partner had a fondness for whistling with his fingers. When you defeat the Guardian Ape, you find the Finger Whistle shinobi tool. Presenting it to the Sculptor prompts a nostalgic response. Later on, an upgraded version of the finger whistle called the Malcontent can be used while fighting the optional Demon of Hatred boss fight.

The demon turns out to actually be the Sculptor, transformed by rage into a large, almost ape-like form. The Guardian Ape helps round out the world by having a connection to the Sculptor — the Ape is either a warped, transformed version of the Sculptor’s partner, or simply ate him — and providing something of a counterpart to the Sculptor, who ends up taking on a demonic, unnatural form.

The Ape is a natural beast kept alive by a literal parasite. The Demon of Hatred is a man warped into a similarly raging best due to different kinds of parasites: greed and anger. 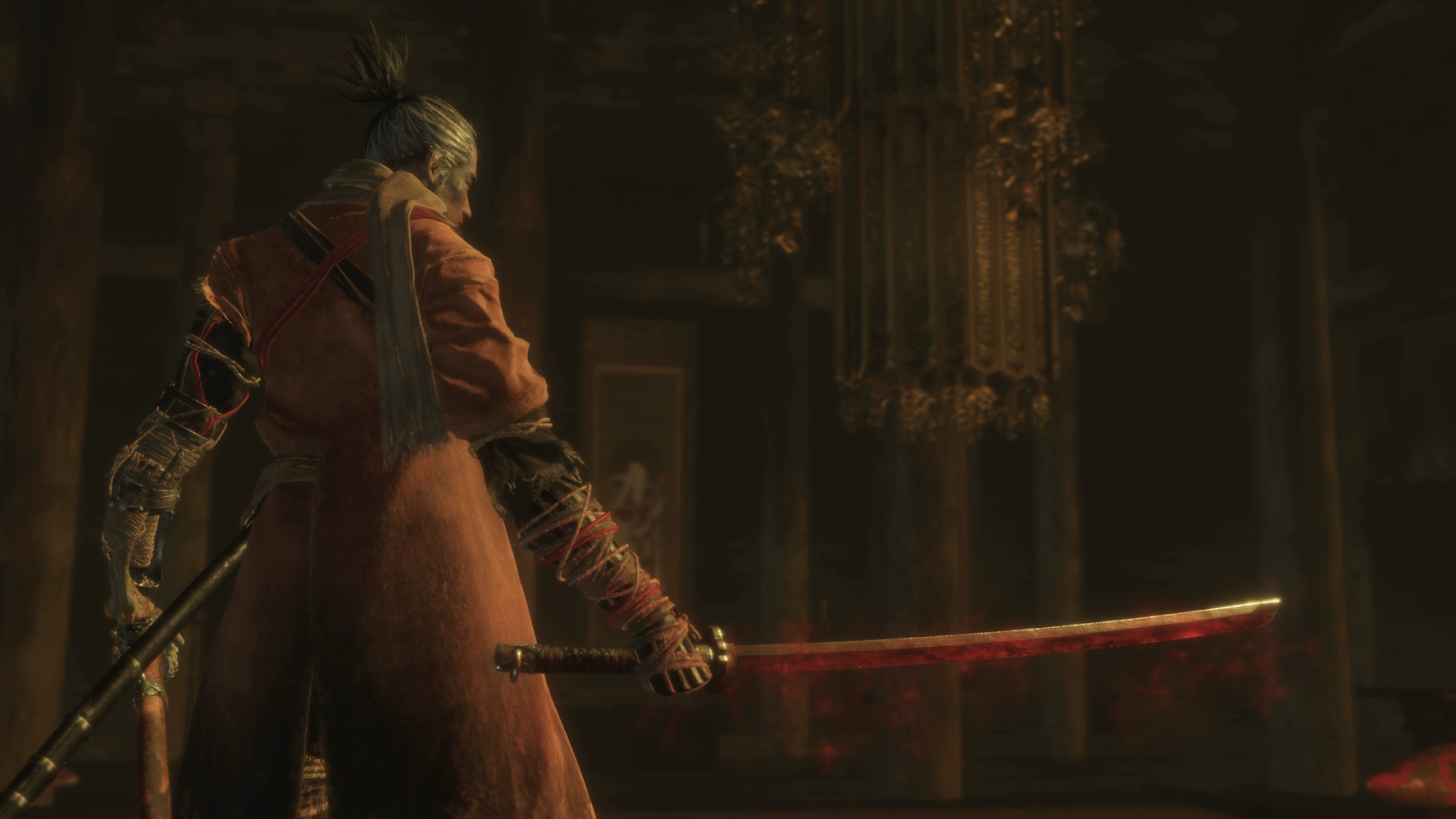 A major plot point involves retrieving the Mortal Blade, a weapon which can kill even immortal beings.

Sekiro focuses on questions of immortality and power. Sekiro’s lord Kuro wants to undo their immortal bloodline. Genichiro Ashina feeds on Rejuvenating Waters to rise from a fatal blow after his boss fight. Parasites infect the Guardian Ape and Corrupted Monk, granting them a twisted eternal life. The monks in Senpou Temple abandon their duties in search of immortality. Sekiro himself cannot truly die either.

This lack of death is a bad thing. Sekiro is explicitly a Buddhist text. Buddhists believe in the concept of Saṃsāra, the repeated process of birth, death, and rebirth. All life is suffering, and this cycle only ends when one achieves vimutti, an escape from this cycle of suffering. Characters in Sekiro exist outside of the traditional cycle of rebirth, either by a deliberate pursuit of immortality or accidental twist of fate.

The Guardian Ape ties into this larger theme. Ashina is not simply a war-torn nation, it’s also a place where nature itself is twisted and misaligned with the cosmic order. If the goal of living creatures is to achieve Nirvana and exist in a state where there’s no more rebirth, characters like Sekiro and the Guardian Ape have achieved a twisted, tragic version of this ideal. No more rebirth. The catch is there’s still plenty of suffering.

The Guardian Ape boss fight can be frustrating at times, with irregular attack patterns and the ability to absorb a lot of damage. Hell, even after you defeat them here, you’ll still have to face them again later on in the game.

That resilience and annoying persistence comes paired with a consideration for player’s various tools and a broader connection to Sekiro’s themes. It’s an intense challenge that rewards ingenuity while also tying into the rest of the game’s story. It’s still an ape throwing shit at you. But it turns out that the shit is actually pretty deep.