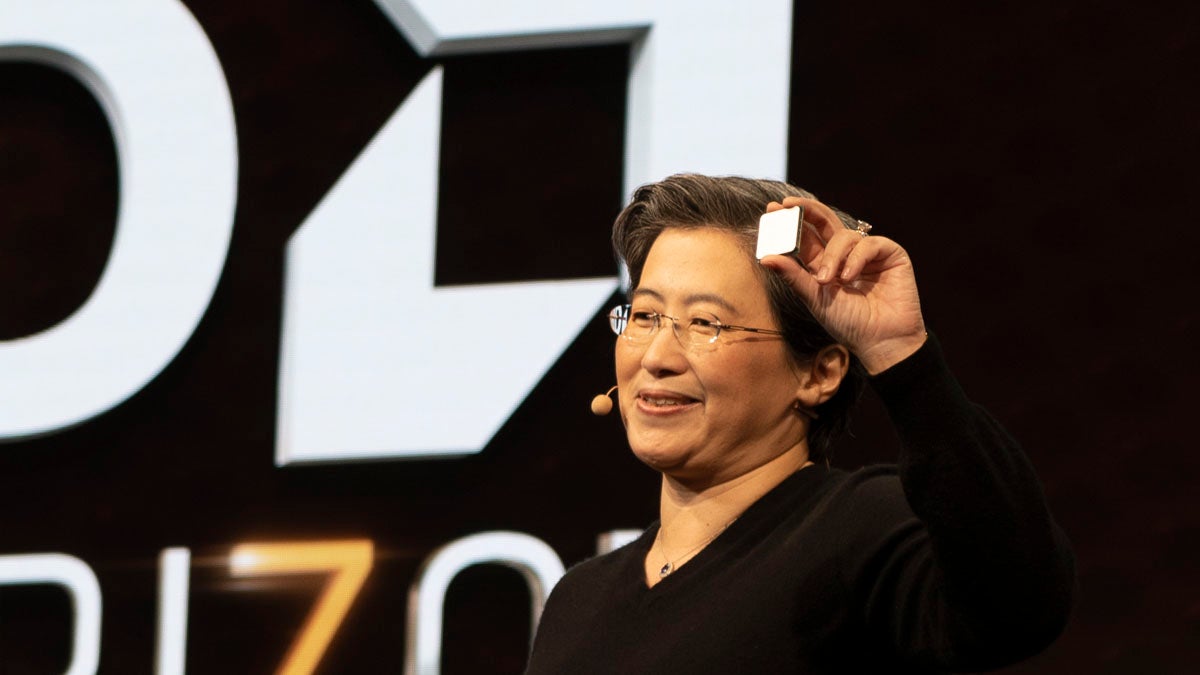 E3 hasn’t been just for games for a while. While the video games are certainly the focus, companies like AMD are reminding us that what we play on is sometimes crucial to what we play. Today the company announced a whole line of CPUs and GPUs intended to make gaming better, and the thing they all had in common? They run on 7nm.

Editor’s Note: Australian pricing and availability isn’t known, but AMD will let us know when the silicon gets closer to launch. — Alex

Do you know how radical 7nm is? Do you know WHAT 7nm is? Heck, do you even know what nm is? (It’s the abbreviation for nanometre.) Processor makers like Apple, Qualcomm, and Intel have been talking a lot about nanometres in the last few years. The nanometres specifically refer to the die size of their processors. As the ability to shrink die sizes yearly, and get the accompanying boost and performance and energy efficiency, has become more difficult, every nanometre has started to count.

So Apple crows about the 7nm CPU in the iPhone XS, and Intel talks a lot about the 10nm parts in its 10th-generation of CPUs. And AMD talks about 7nm in its new CPUs and GPUs. The company has been promising for a while to bring 7nm to desktops and laptops we use daily and with Zen 2 and RDNA it’s delivering on that promise.

Just to be clear, this isn’t the first time it released a 7nm part. Back in January, it launched the Radeon VII, a 7nm GPU based on its older Vega architecture. The new 5700 and 5700XT are based on the brand new RDNA architecture that will also be appearing in the next-gen PlayStation and Xbox consoles set to be released next year (while many are using RDNA and Navi interchangeably, AMD has told me it prefers people use Navi when speaking of specific GPUs and RDNA when talking about the overall architecture.) But when talking about the 5700s AMD still spent a lot of time talking about 7nm, because, at least from the benchmarks it has showed off, this stuff is seriously fast. 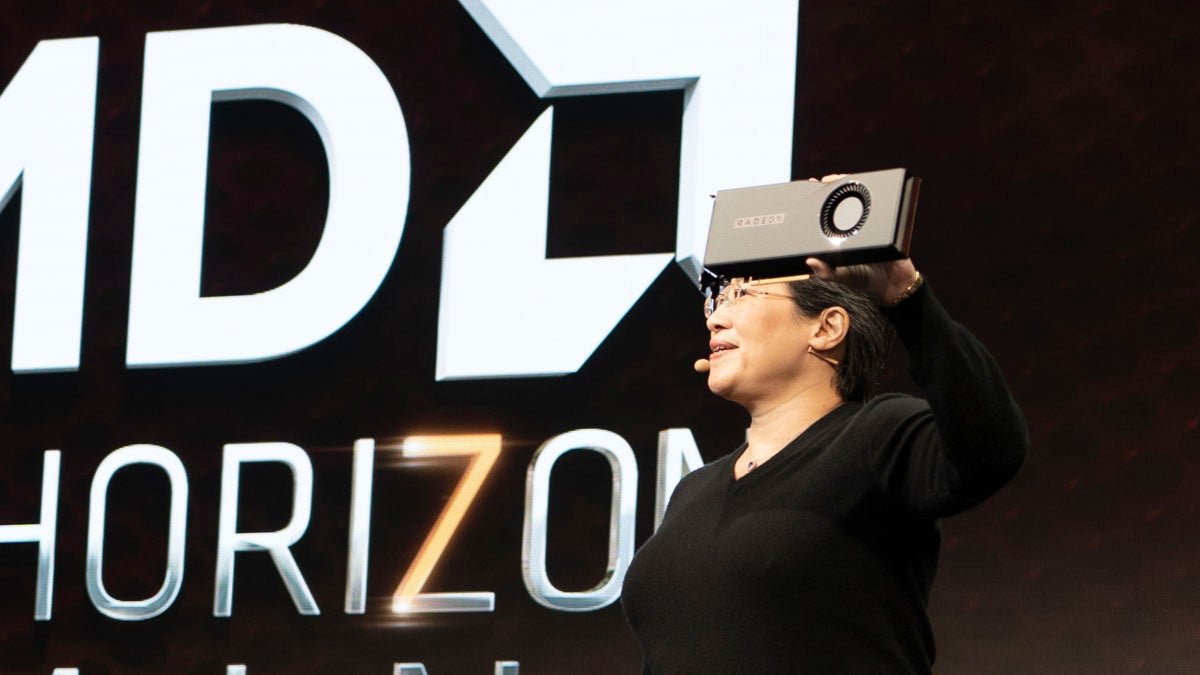 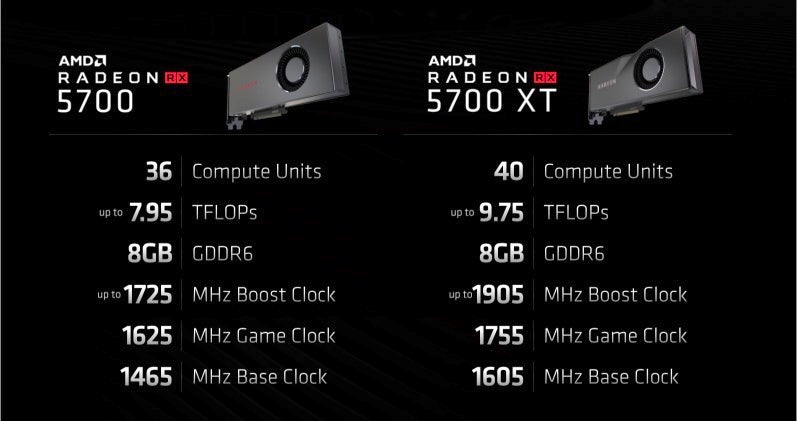 According to AMD the RX5700XT has a die size that’s half of the last generation Vega 64, and that it has 14 per cent better overall performance while using 25 per cent less power. Simon Ng, one of RDNA’s project managers told me it was a 1.7 times better performance per watt.

And the slides AMD presented outline its performance compared to its rival 2070 suggest it really is impressively fast. The same can be said for the RX5700 versus the 2060. 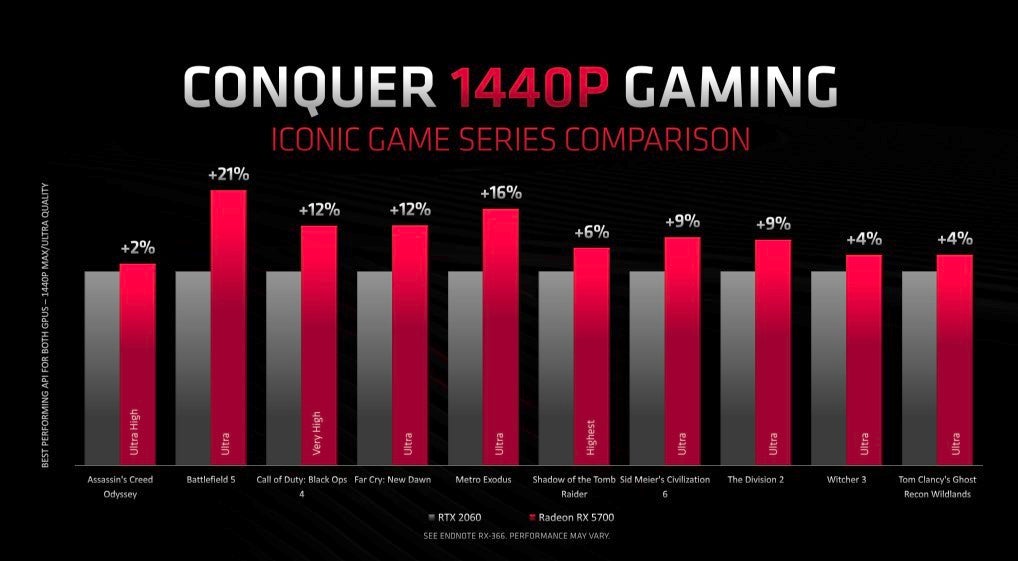 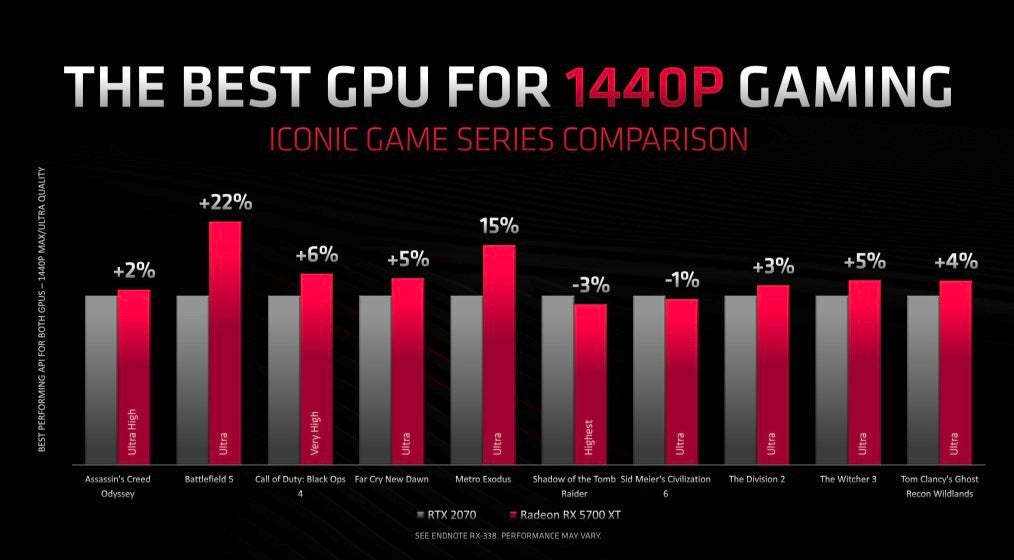 The performance of the RX 5700 XT versus the RTX 2070 isn’t quite as impressive, but still very nice for a presumably cheaper card.

The RX 5700, in particular, seems to be a better buy than its rival, with double-digit better performance on four of the ten games tested, and single digit improvements on the other six. All while being only $US30 ($43) more. If you can survive without the raytracing support the RTX 2060 provides, the RX 5700 seems like a good deal. The RX 5700XT is also a good deal when you consider its’ performance is on par with the RTX 2070, but it costs $US150 ($215) less.

Another tool meant to improve graphics is Radeon Image Sharpening. RIS will let programmers have sharper images in background assets. Ideally, so things look crisper and less blocky than in many current games. RIS is essentially a super lightweight post-processing shader. Usually, such a shader would be taxing, but according to AMD, turning on RIS will create a minimal slowdown. On average it should be less than a 2-per cent performance hit versus playing the same game with RIS off. 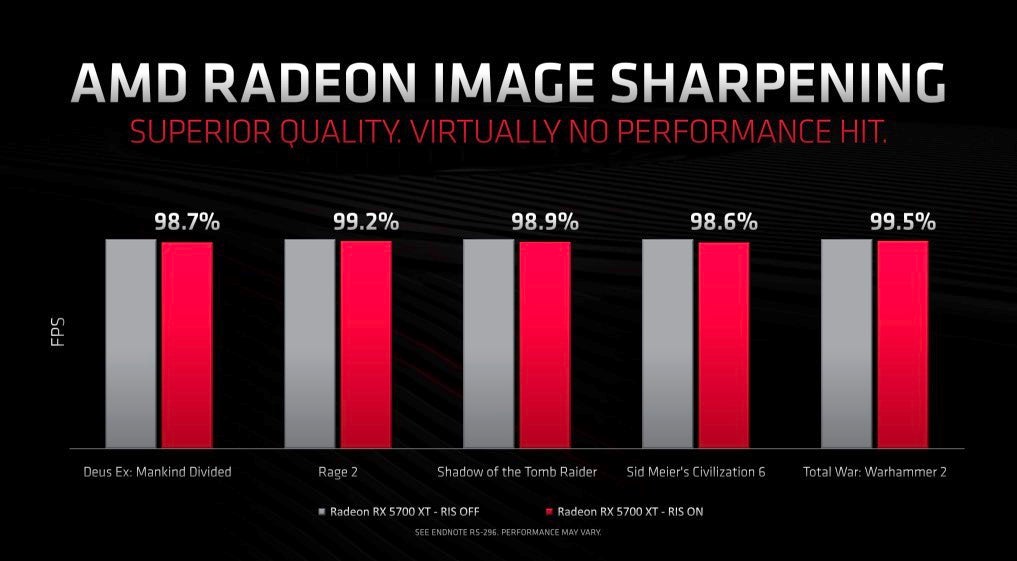 Finally, there’s Radeon Anti-Lag. RAL is intended to reduce the lag that comes from a GPU simply rendering what’s on screen. In a demo of Borderlands 3, AMD showed an improvement of about 15ms with RAL turned on. 15ms is about the length a single frame is onscreen. So that’s about a 1fps improvemnt. Not necessary for…most of us, but crucial for competitive gamers who need every last frame they can get.

This is because Zen 2, like RDNA, is based on a 7nm process. Which means data needs less energy to move a shorter distance faster than the larger 14nm processor Intel’s current desktop CPUs use.

It’s also because AMD has doubled the size of the L3 cache. That’s good because L3 cache is where the most crucial and immediate data is stored that your processor needs to read. When it fills up the data gets kicked over to the RAM. Reading data from RAM is fast, but not nearly as fast as from the L3 cache. The smaller cache of the second gen of Ryzen processors led to sluggish single core performance and overall lag in L3 cache memory intensive work like video games.

By doubling the cache, AMD is hoping it can beat Intel, which has traditionally had much better performance on games. 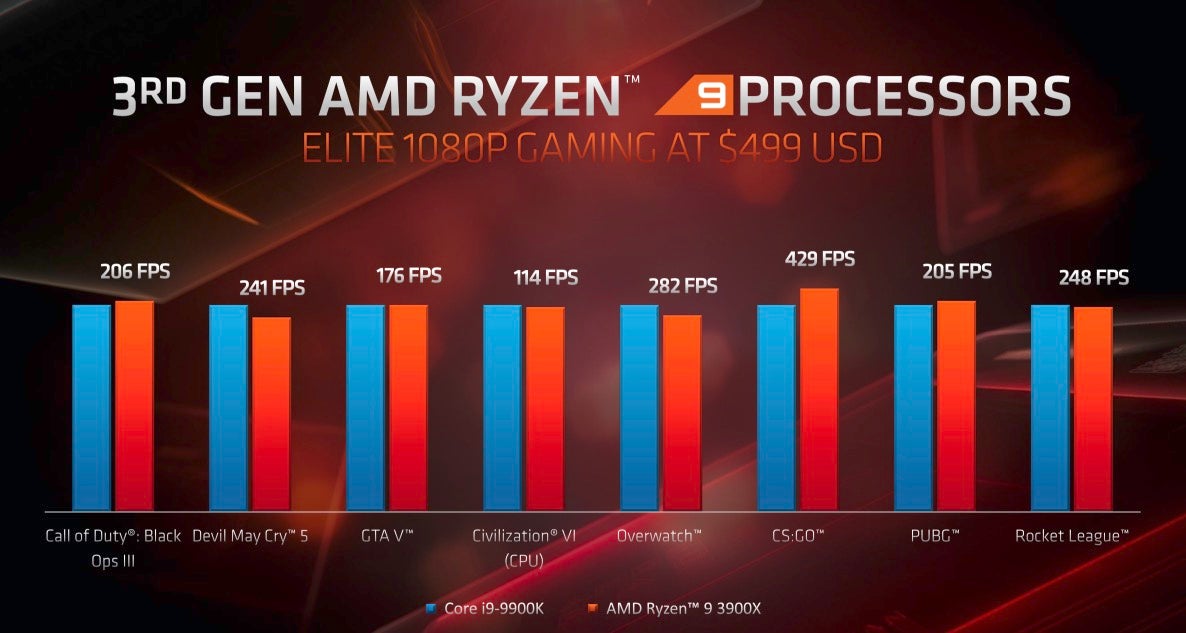 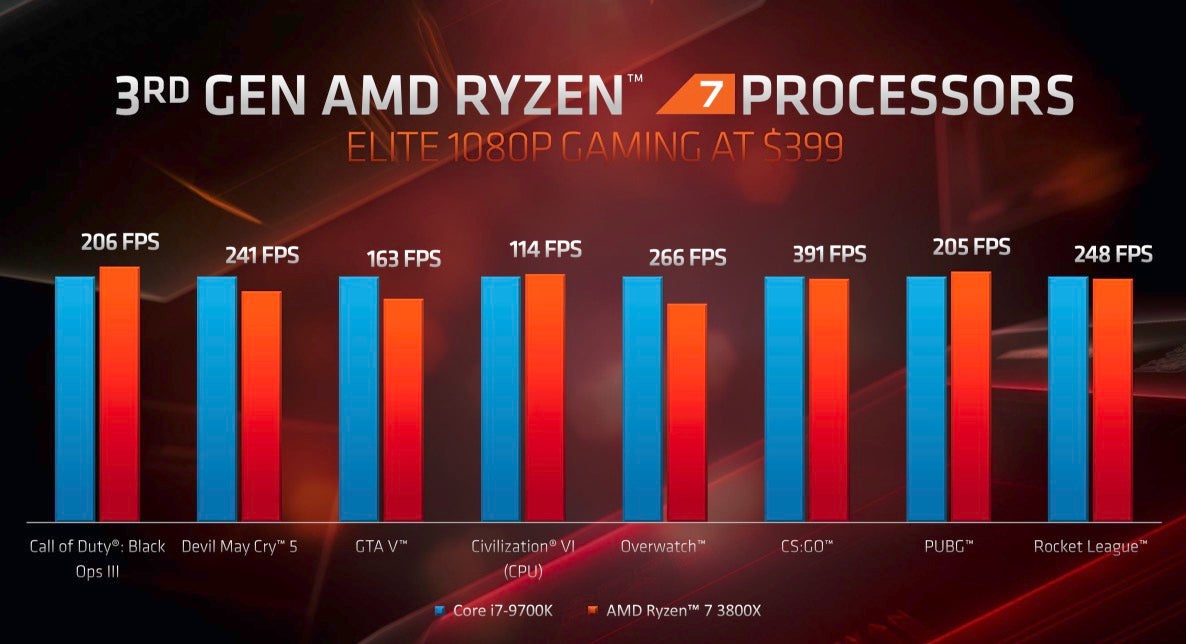 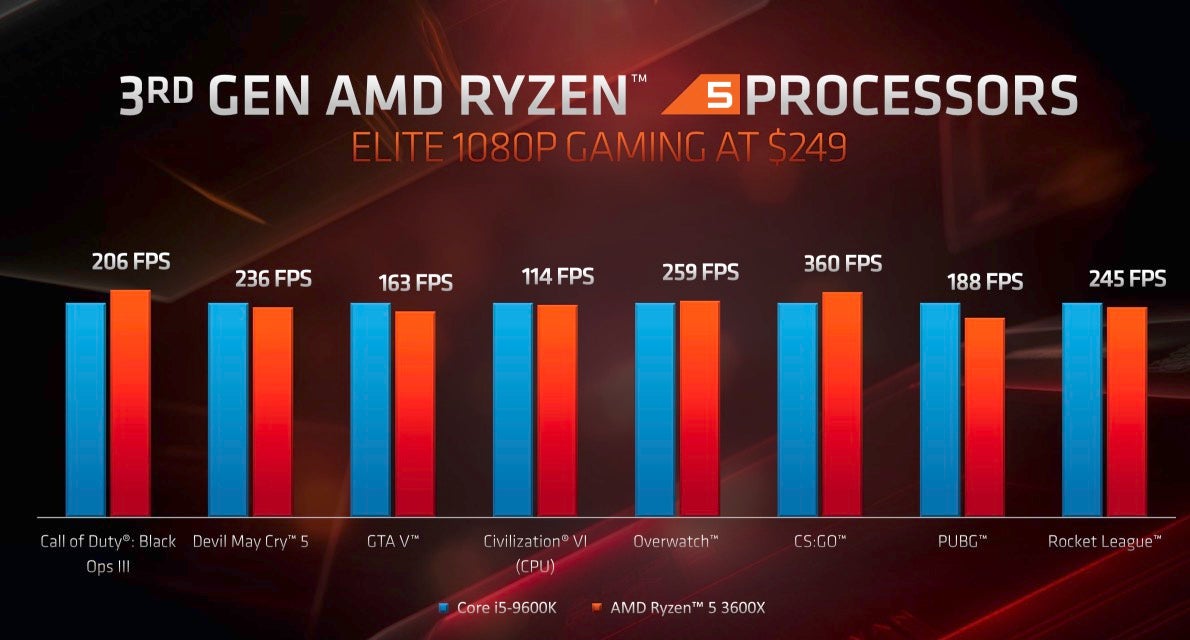 The new Ryzen processors will mostly be available July 7, 2019. The only one not being released next month is the surprise Ryzen 9 3950X, which is due in September 2019. That part was announced today by AMD. It’s another 105W CPU. Only instead of 12 cores and 24 threads—the most found in a desktop CPU intended for gaming, the 3950X has 16 cores and 32 threads. Intel has nothing like it available at that size or power requirement.

And that’s kind of the point. As you’ll notice in the above benchmark slides, even by AMD’s own claims, it is not always winning against the competitors when the comparison is core to core or compute unit to compute unit. Intel and Nvidia have been dominant in the CPU and GPU fields respectively because they make damn good parts. AMD’s benefit is that it can give users a lot more raw power at a much lower price. The Ryzen 3950X is emblematic of that.

But as we’ve seen repeatedly when reviewing AMD products, it’s not just about the raw power. Relationships with software makers matter. Nvidia and Intel have better support and, at least in the PC space, wider adoption. So expect to hear more from AMD about its partners in the software and hardware world. And especially, expect to hear more about how it’s in nearly all of the next generation of consoles.