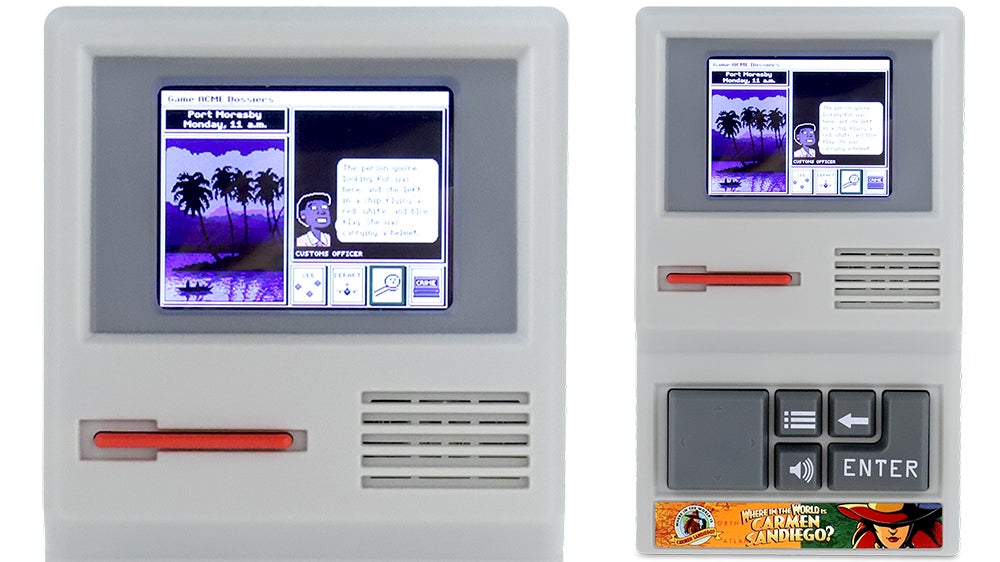 Photo: Basic Fun!
To sign up for our daily newsletter covering the latest news, features and reviews, head HERE. For a running feed of all our stories, follow us on Twitter HERE. Or you can bookmark the Kotaku Australia homepage to visit whenever you need a news fix.

Thirty years ago if you offered a kid the choice between playing Super Mario Bros. and Where in the World is Carmen Sandiego?, the plumber would always win. But if asked to choose between studying fractions and playing an educational video game in the school computer lab, who wouldn’t go the Carmen route? It was the first computer game many kids ever played, and that experience can now be replayed anywhere with this handheld recreation of the original version of the game.

If the handheld looks vaguely familiar it’s because it’s from the same company responsible for the portable version of The Oregon Trail released last year.

Basic Fun! has carried forward that handheld’s styling, which is designed to look like a miniaturised version of the Apple II personal computer, which Apple heavily marketed to schools as an educational tool. Thanks to software companies like Brøderbund and games like Where in the World is Carmen Sandiego?, the Apple II was also the first computer many kids ever touched in the ‘80s, so this design continues to be a nice homage.

In lieu of a full QWERTY keyboard, the handheld version of Where in the World is Carmen Sandiego?, which will be available sometime this spring for around $40, relies on just four buttons as well as a four-way directional pad with an awkwardly square design. But it’s not like this is a game with intense action sequences that requires lightning-quick reflexes and responsive controls. There’s a lot of reading, and a lot of selecting from various menus and that’s about it. That’s not necessarily a bad thing, however.

Playing endless rounds of Candy Crush on your subway ride to and from work isn’t doing much to stimulate your brain, but while zig-zagging the globe and hunting for Carmen you’re going to learn a thing or two in the process. It might not be the most exciting video game from your childhood, but even today it’s still a better alternative to schoolwork or real work.