Children Of Morta Is A Solid Roguelike 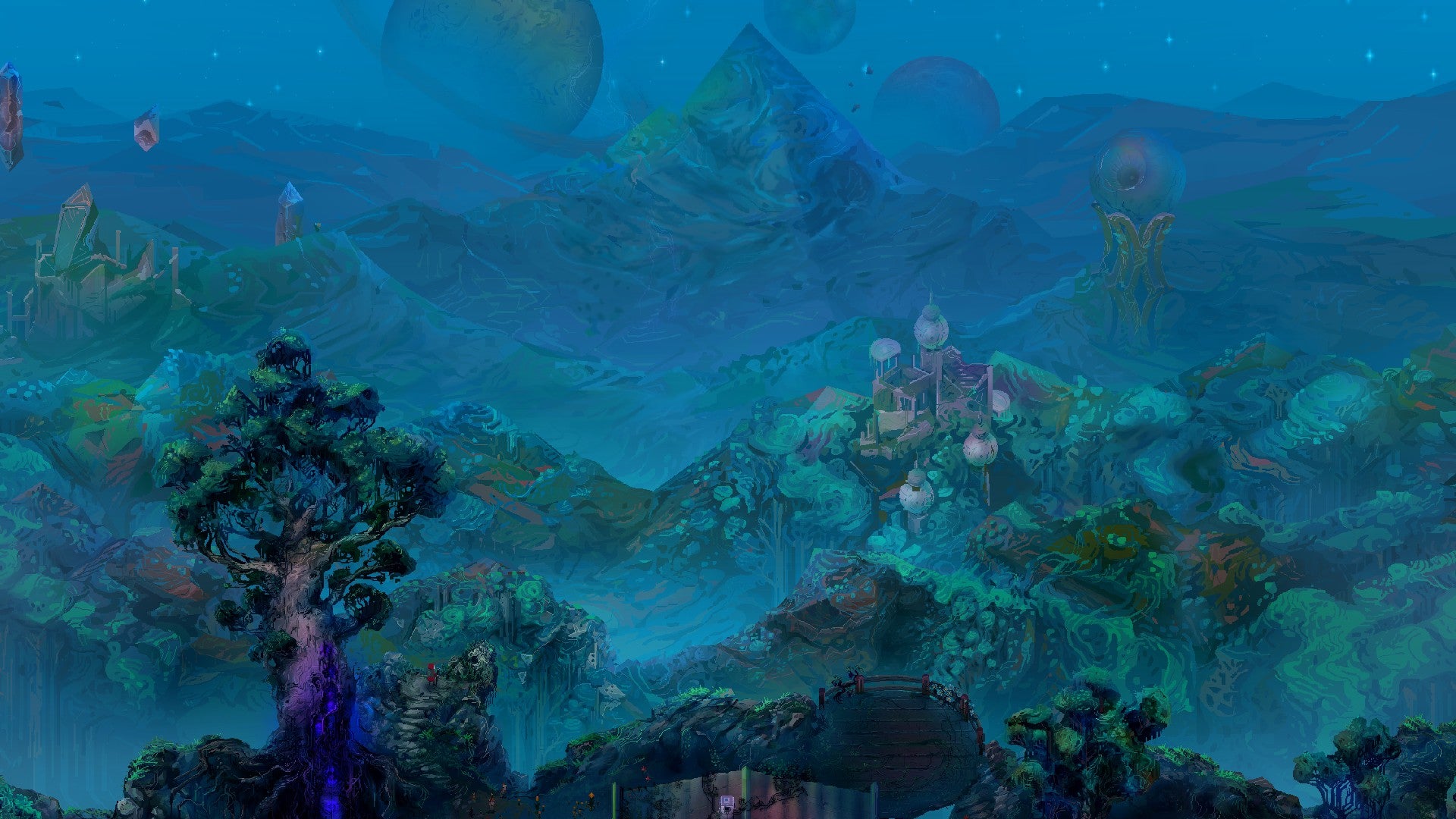 Children of Morta is a roguelike RPG by Dead Mage, published by This War of Mine studio 11 bit. It’s out today for PC, with PS4, Xbox and Switch versions coming in October. I’ve played pieces of it over the years, and now that I have the full game, it’s as solid and fun to play as I was hoping.


I played a demo of Children of Morta early last year, and over the summer Kotaku video producer Paul and I sat down with some folks from 11 bit to play a more recent build. The game has expanded in that time, adding new systems and areas, but the core remains the same.

You control the members of the Bergson family, adventurers who have to protect their land from an evil called the Corruption. You do this by delving into dungeons and fighting hordes of monsters, and dungeons culminate in a boss fight that opens up the next area. The layout of the dungeons changes every time you play, as do some of the powers you gain on your runs. Between runs, you learn more about the family and the world they inhabit. It’s all done up in lush, highly-detailed pixel art that makes the world feel lived-in and dense.

Each Bergson has a different skillset. John has a sword and a shield that blocks damage. His son Kevin has daggers and can gain the ability to throw knives in all directions. His daughter Linda shoots arrows, while youngest child Lucy throws fireballs. Characters unlock different abilities on their personal skill tree with points they earn through dungeon runs.

Using money you find in the dungeons, you can also buy upgrades that extend across family members to increase their health, damage, or critical chance. These shared upgrades mean unlocking a new character doesn’t put them far behind the others; I found that one run through the first dungeon was more than enough to make new characters viable for the tougher dungeons. Characters play very differently, making some encounters harder than others, but so far they’ve all been able to hold their own in my solo runs.

Characters can become afflicted with fatigue and be less effective for a time, encouraging you to switch things up. The game is also playable co-op, and AI characters sometimes join you in solo play. The combination of a melee and ranged character makes dungeons much easier, especially when enemies mob you, but I never felt like I wasn’t getting the full experience by playing alone.

You also gain temporary powers while you play. The dungeons are littered with artifacts and obelisks that can restore your health between floors, create a damage-dealing aura around you, or give you a companion that heals you or hurts enemies.

Once I got an ability that let me summon a dragon from the floor to fight with me, which was immensely helpful in addition to looking cool as hell. Some of these abilities are passives, while others are one-use or recharge over time. While there can be a bit of RNG involved, I’ve rarely had a run ruined by failing to find the right items, and they make each journey into the dungeon feel different.

You’ll encounter small sidequests while you play, like finding certain items or fighting unique enemies. Other areas have minigames, like “Pong of the Gods” (exactly what it sounds like) or memory puzzles. I often fell afoul of the latter, selecting the wrong buttons and repeatedly unleashing enemies that chipped away at my health, but these puzzles made for nice changes of pace from the dungeons’ abundant combat. 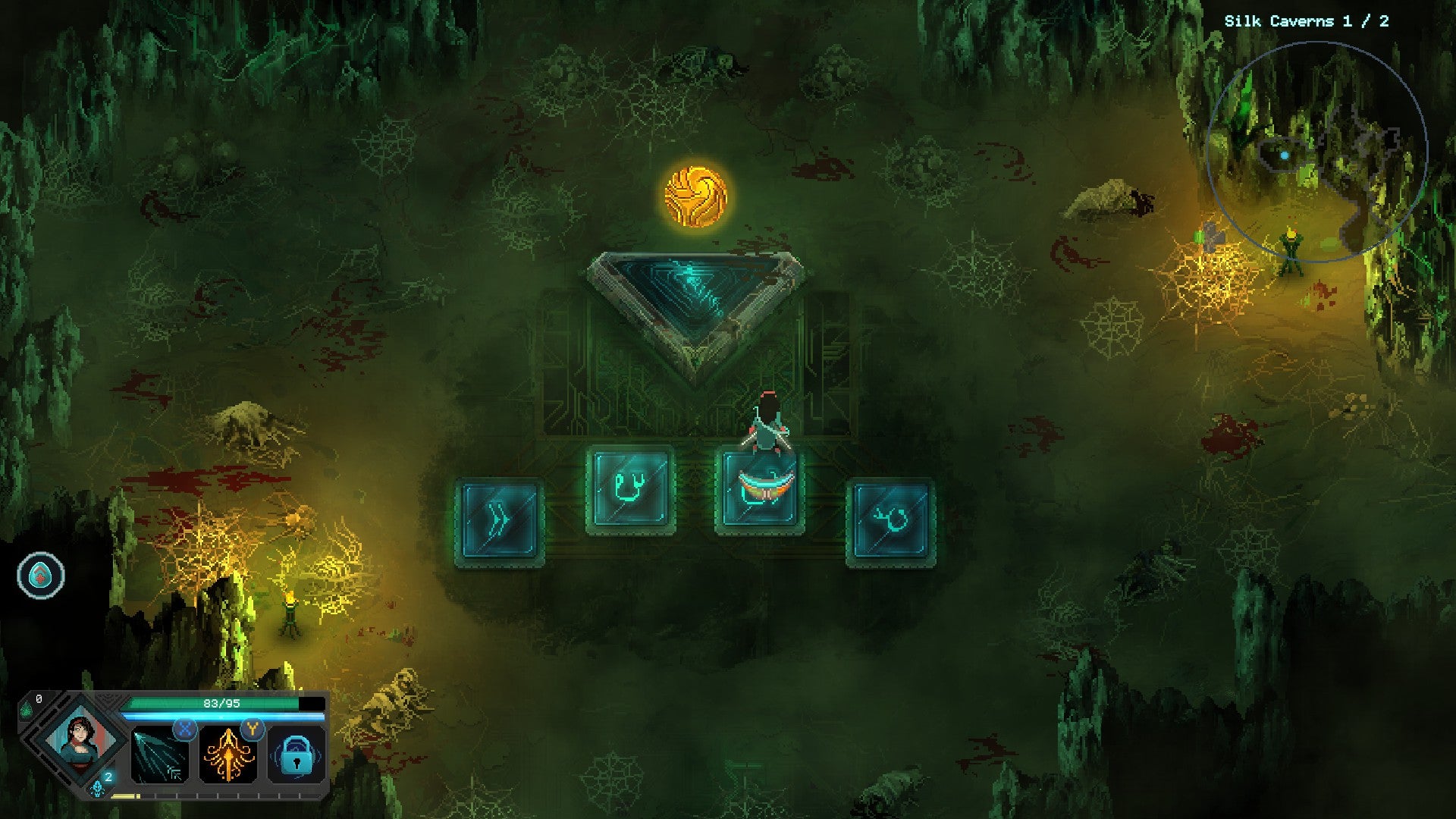 In between runs you return to the Bergson’s familial home. In my first impressions of the demo, I called it “a fancied-up menu at heart.” It’s still basically a place where you upgrade your abilities, but now there are more stories to unlock over time. Children of Morta has been fleshed out with drama between family members and more details about the game’s world, told by a commanding, dramatic narrator.

These stories occasionally wore on me — I didn’t always want to sit through a fantasy tale when I was itching to unlock a new dungeon, and my tendency to read the subtitles faster than the narrator spoke the lines made me impatient sometimes. But the narration adds a lot of depth to the game and makes the characters feel like more than just different classes.

Knowing how much the younger children trained before they could fight alongside their family or learning the uncle’s rich inner life instead of just viewing him as a dispensary for upgrades gave the family a complexity that made characters feel special to play and added weight to my runs. You can sometimes see the effects of your sidequests in the family’s home.

In one dungeon, I rescued a wolf cub; later, I saw the family building it a doghouse and naming it. All of these details, especially when combined with the game’s art style, make Children of Morta feel textured and complex. 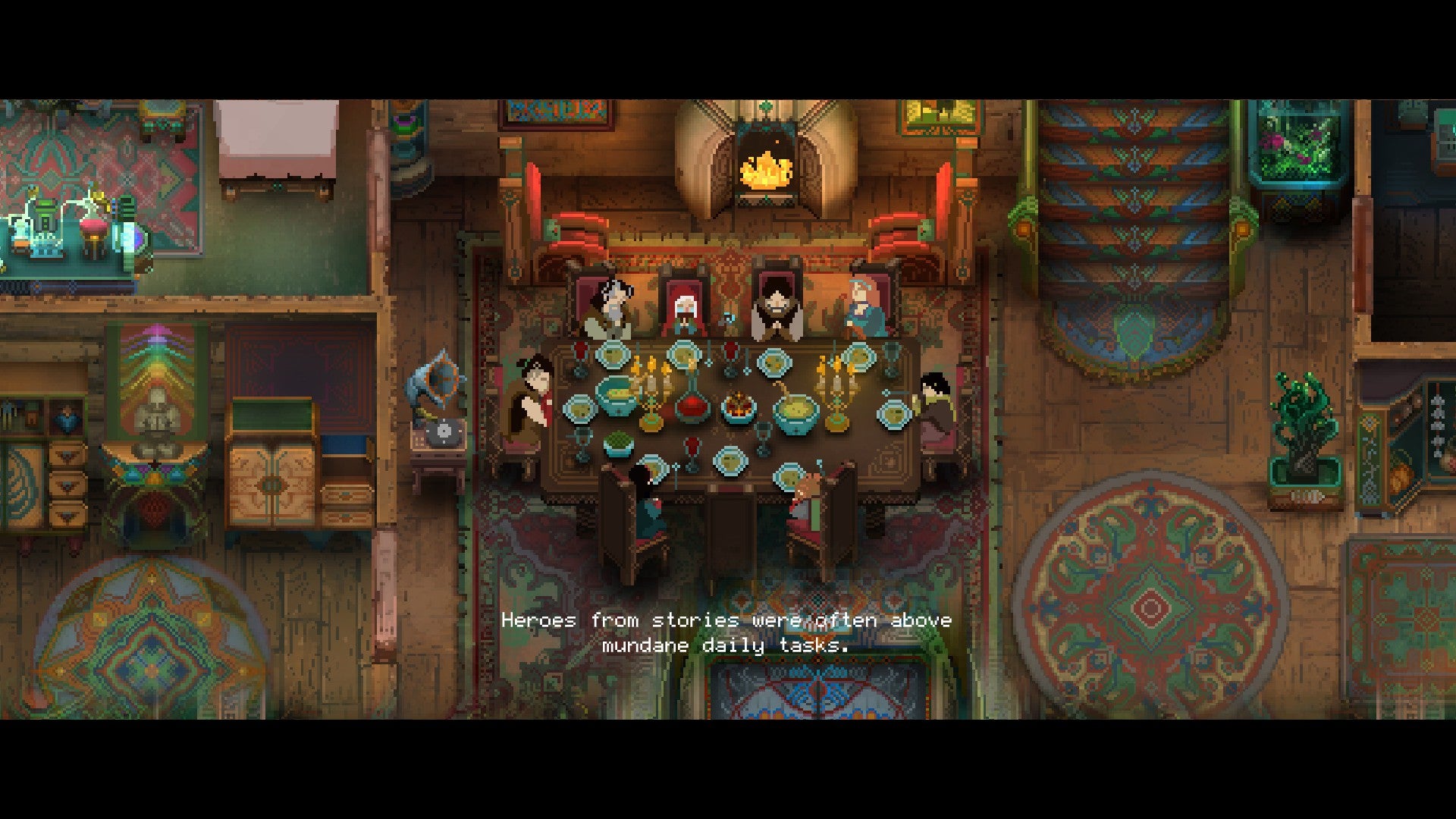 Combat hasn’t changed much from earlier versions we’ve shown off. It can be a bit button-mashy at times, though you’ll need to position yourself carefully when faced with hordes of low-level enemies mixed with high-level ones.

Some tougher enemies can spawn minions, and things get crowded fast. Health can be scarce — you find it in the world, or enemies drop it on death—and more than once I tried to get through a floor by fleeing, which often led to getting piled on by an entire level’s crowd. But combat can basically be reduced to spamming attacks, dodging away, and using your abilities as soon as they’re off cooldown.

It can be repetitive at times, but it’s never mindless. Boss fights are similarly simple but can get hairy quickly. I had the best luck in boss fights when I picked a character with ranged attacks and kept my distance, even if it made the fights go on a long time. Combat isn’t Children of Morta’s most interesting or unique component, which could be a problem since it’s what you spend most of your time doing. But it’s complicated enough to be engaging while still being easy to pick up.

As someone who loves roguelikes for the way I can jump in and out of them, it’s just the right speed to make Children of Morta a game I’ll keep on hand. 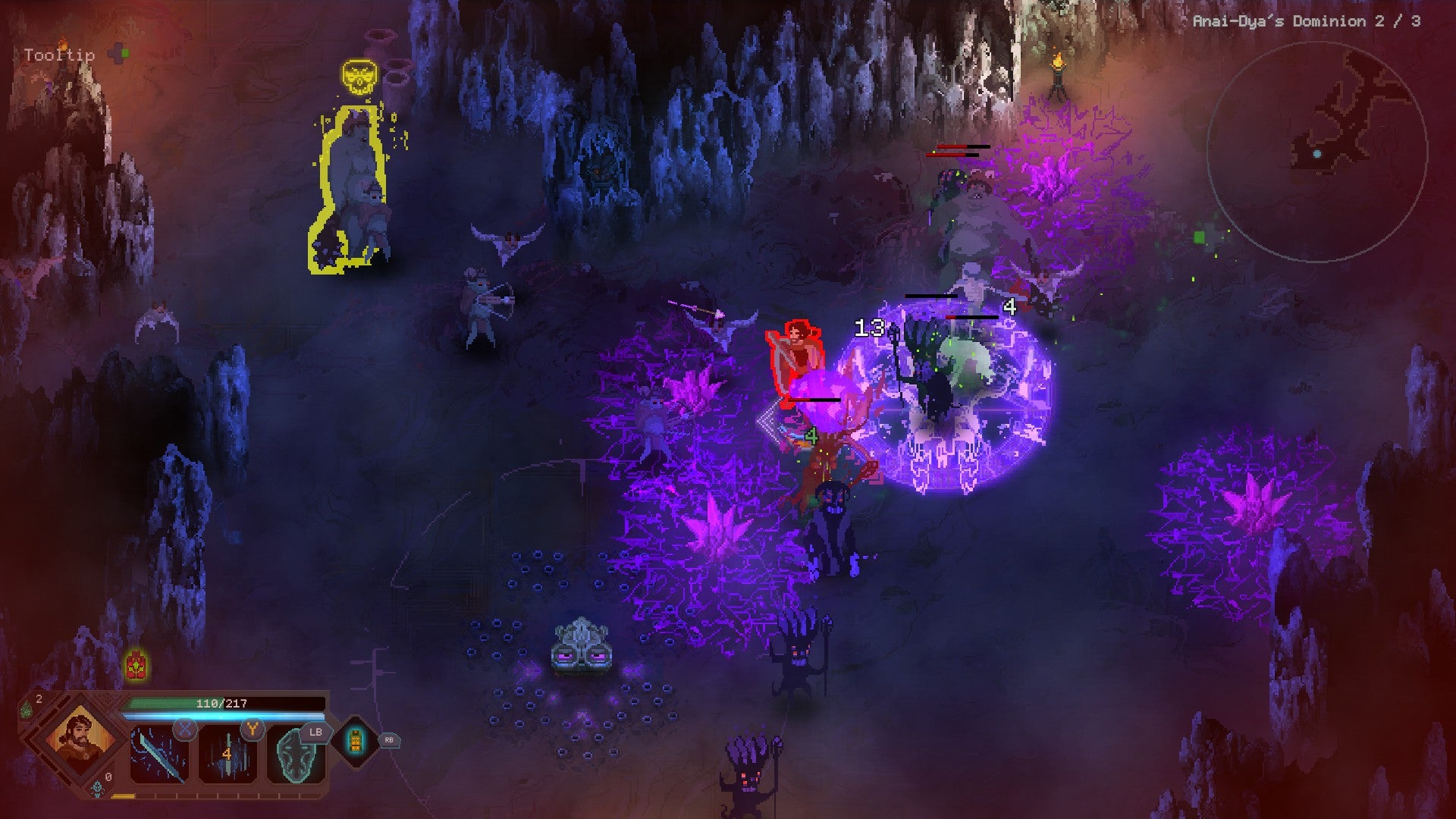 I’ve played about 10 hours of Children of Morta and seen the third and final boss fight in the caves, with more areas still to unlock. The game hits many of the roguelike qualities I like best: randomness to keep me curious, combined with consistent mechanics that make the game easy to come back to and make swapping between characters interesting but not too jarring.

I’m excited to finally have the full game to pick up whenever I want, and I’m curious to see where the story of the Bergsons goes as I play more.