Out now on iTunes and Google Play, The King of Fighters Allstar takes the expansive roster of fighters from SNK’s long-running fighting game series and turns them into collectible characters in a side-scrolling beat-em-up action RPG. It’s very flashy and obnoxiously free-to-play, but I’m actually having a great time. It’s a neat new way to interact with my favourite fighters.

At least that’s the story. The real reason players can become KOF characters is so they can collect them all via the game’s gacha-style summoning system. Players spend “rubies” earned through gameplay or obtained via in-app purchases in order to buy characters from the game’s 200+ strong roster. Characters are arranged in teams of three, each with a backup character to be called in during fights for a little extra. 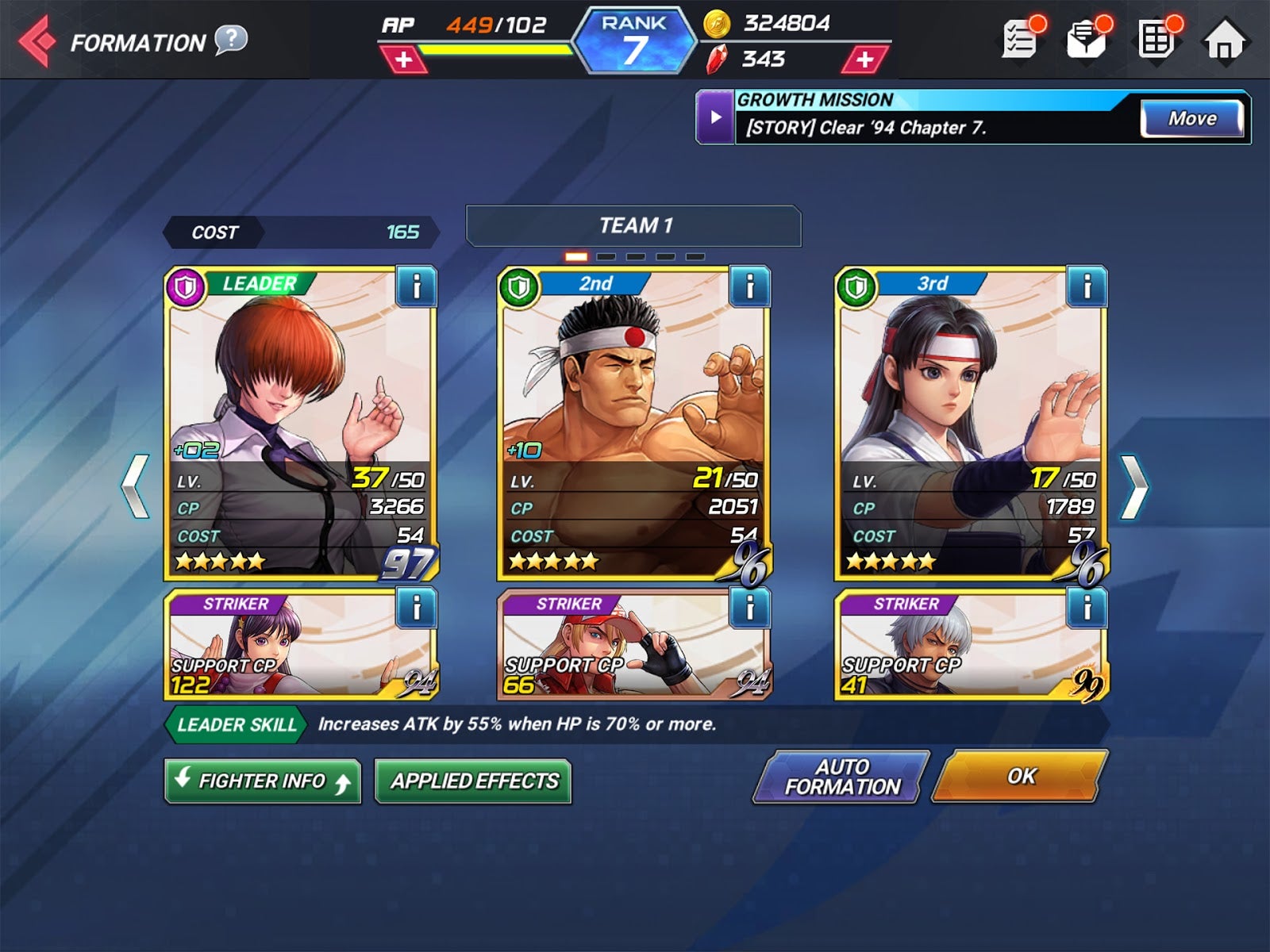 Instead of fighting in one-on-one tag-team battles like the core King of Fighters games, teams in The King of Fighters Allstar engage in side-scrolling beat-em-up battles. A virtual joystick moves the fighters across the stage as generic enemies swarm. Characters use a combination of basic hits and kicks and their signature super moves from the fighting games to plow through the masses. At the end of each stage a boss appears. The boss goes down and it’s on to the next, slightly more difficult battle.

Players can swap between the three characters on their team as they please. There’s an elemental affinity system in place where characters of one element are stronger or weaker against enemies of another, so having a varied selection of fighters available is important. Each main character in a team has a striker, a backup character who can drop into the game to deliver a quick attack when needed. Players can complete missions solo or team up with others in co-op mode, though I’ve not had much luck finding open multiplayer rooms so far. 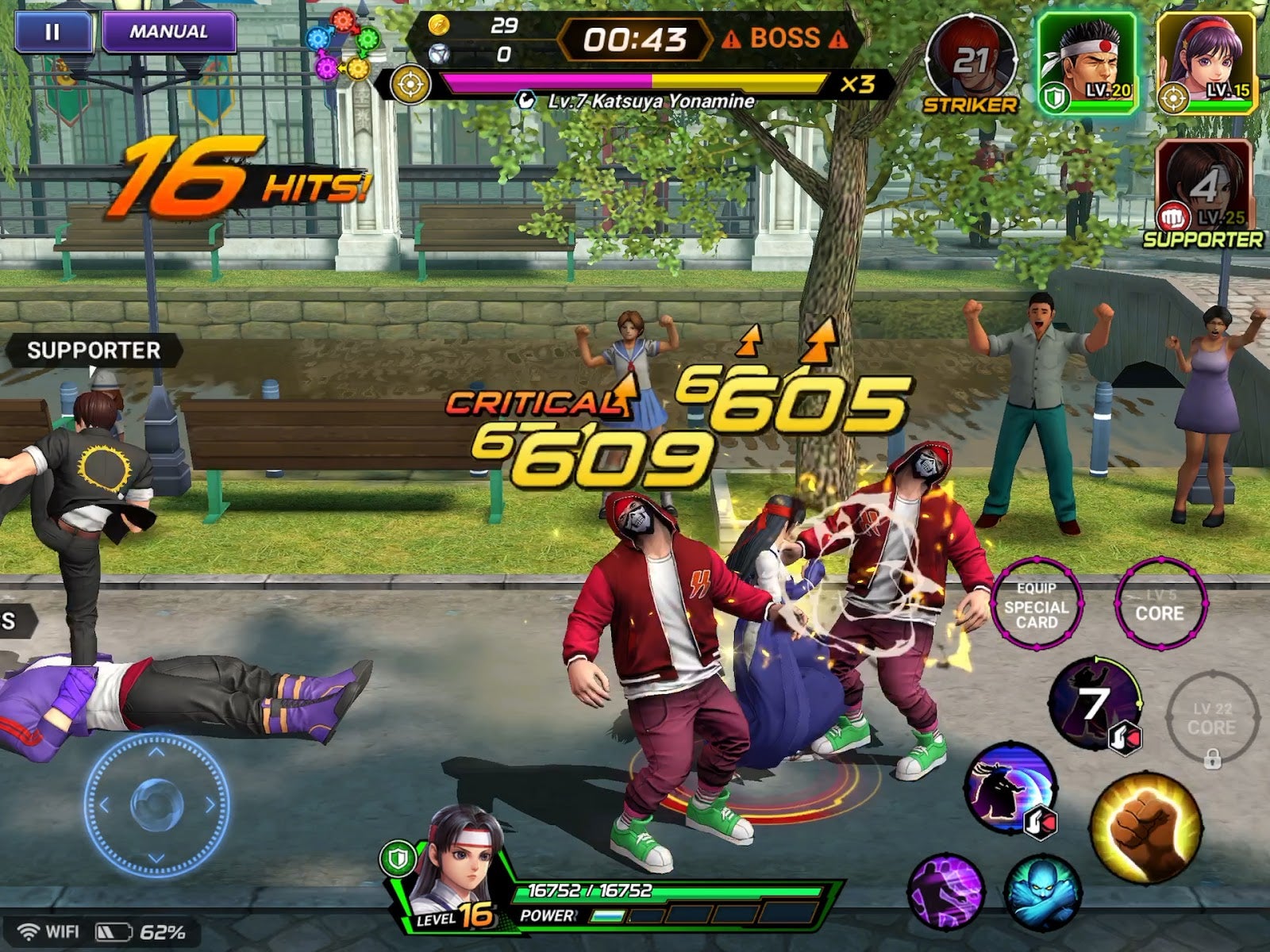 It’s a pretty basic battle system—any system with an “auto-battle” option generally is—but it’s pleasant enough. I’ve tried letting my characters fight on their own while working through the game’s story missions, but the special attack, block, and dodge buttons call to me.

Battles might be basic, but fighter management is anything but. Each character has a skill tree that unlocks new abilities and upgrades stats. While characters level up slowly by playing through story missions and special events, experience-point-boosting items are rewarded regularly to help power up players’ favourites. Players can raise their affinity with each character through gift-giving, which increases the character’s power while rewarding the player with in-game currency and items.

All of this time spent managing, upgrading and customising has made me incredibly fond of my characters. I’ve invested quite heavily into my Shermie, for example. When I get experience-point-boosting items, I go straight to her upgrade page. When I get new cores, items used to unlock new skill tree slots, hers is the first I check. We’re partners, Shermie and I.

What I really love about The King of Fighters Allstar is the presentation. Every screen has some character from the series rendered in 2D, animated in the infinitely GIFfable style seen above. The 2D animated sprites also appear in the main story’s visual-novel-style cutscenes. Every now and then the game mixes in a special scene with a slightly more animated style, like this: 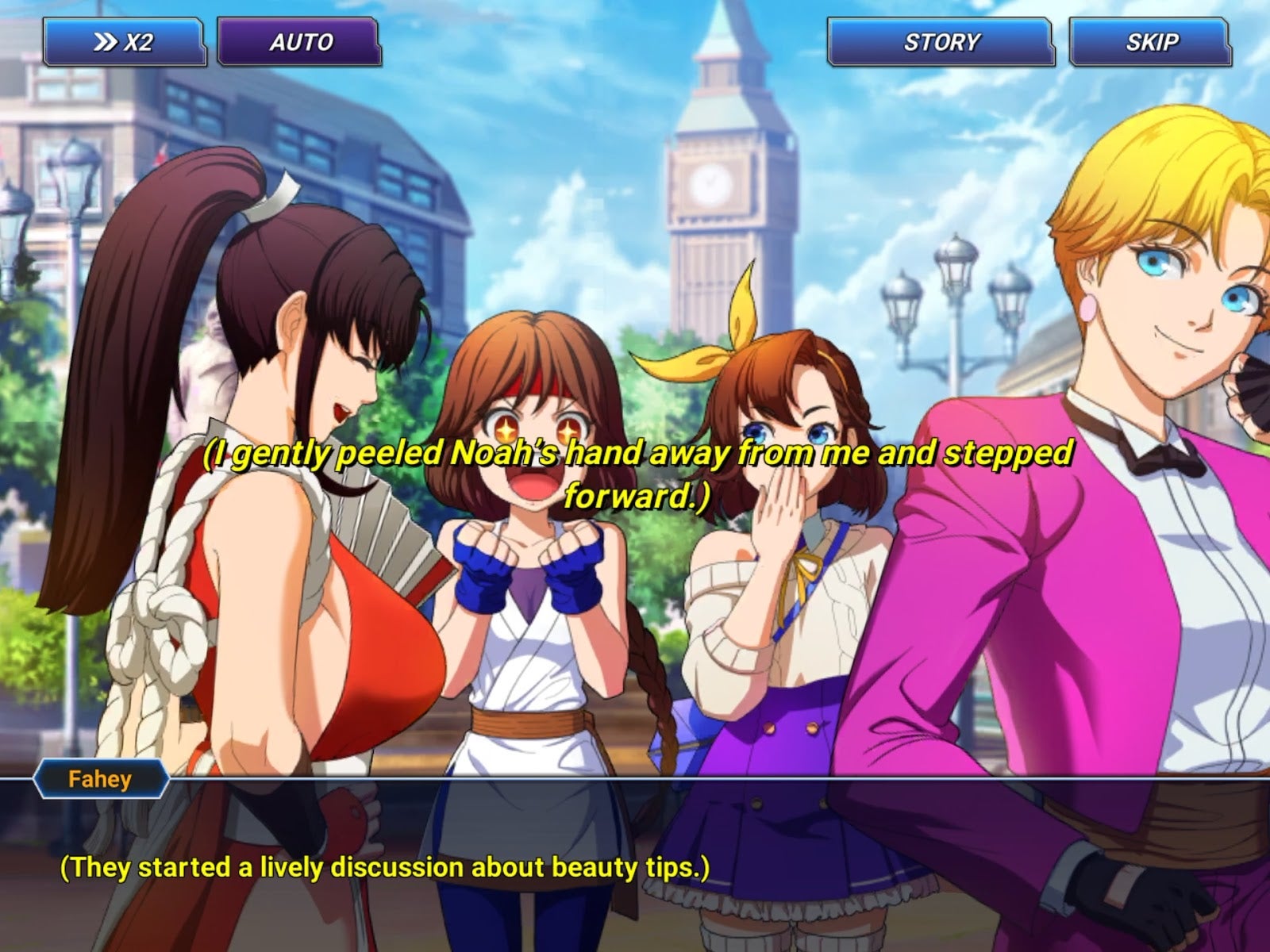 It’s a joy to look at. Well, unless you have a low tolerance for free-to-play flashiness. The King of Fighters Allstar loves its advertisements. The game opens with multiple splash screens announcing upcoming or ongoing events and in-game store sales. There are multiple daily login rewards. There’s a lucky roulette event going on.

There are multiple ways to summon characters or combat cards (which I’ve not unlocked yet) or upgrade items. There’s even a special event where players can get free weekly summon tickets for being Amazon Prime members, the first I’ve seen of that sort of cross-promotion in a mobile game. 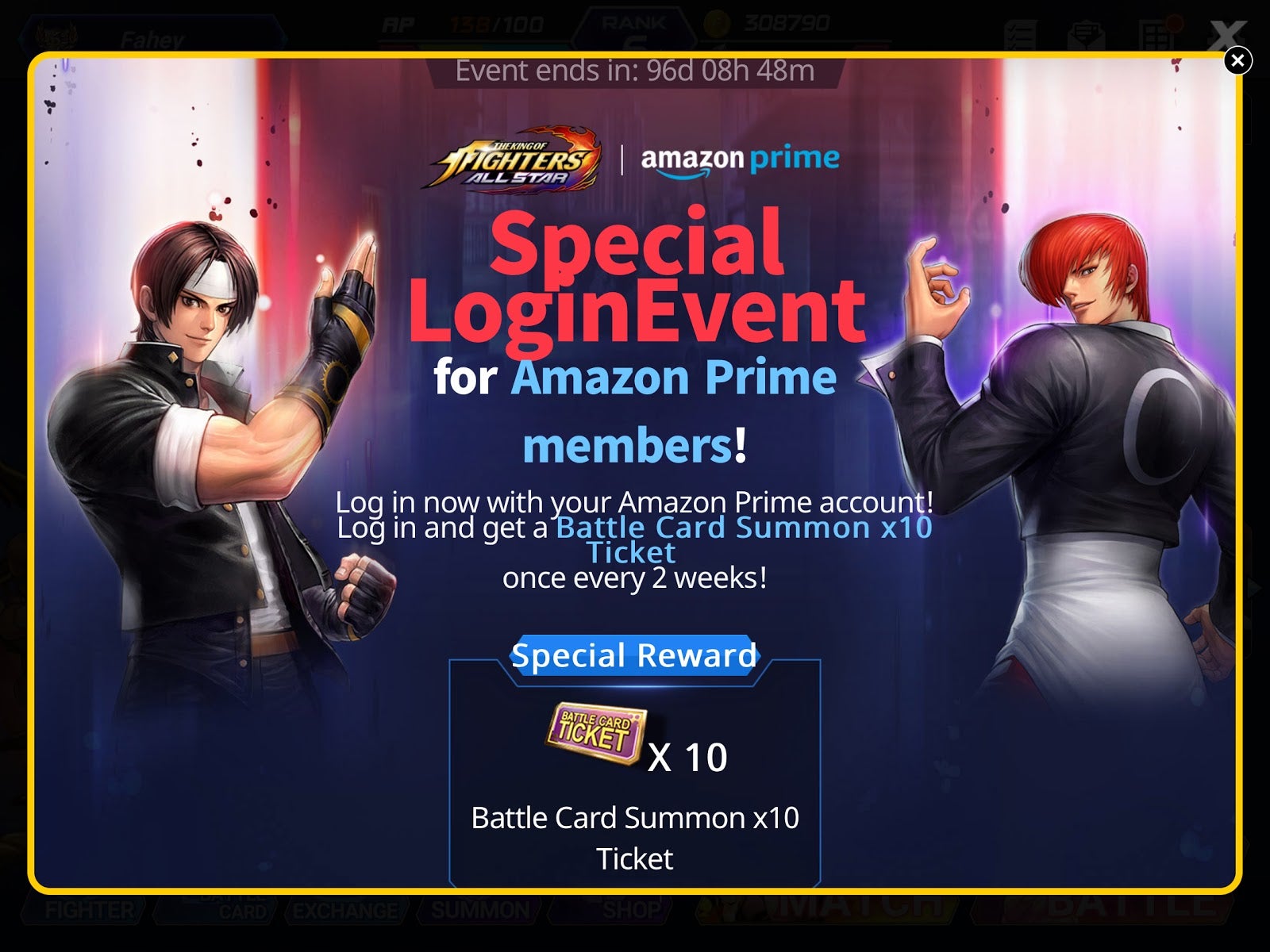 If you’re at all worried about your self-control when it comes to microtransactions, run from The King of Fighters Allstar. Though I’ve gotten plenty of in-game currency by playing through the game, completing challenges, or through launch window promotions, the urge to collect more characters in order to build a fighting force of extraordinary magnitude is strong.

Otherwise, I’m having a wonderful time with this greedy little game. The King of Fighters series has so many exciting characters. It’s nice to play with them outside of their element. If you’re a fan of the series and don’t mind a little free-to-play mobile tomfoolery, then you win.